Wednesday. Completely at odds with the ‘Listless’ theme, we spent three days franticly writing down everything we could possibly need for Frankie & Harry’s Wedding Weekend, then drove away from Glasson with the car full of an eclectic mix of posh clothes, camping gear and baking equipment, trying to ignore the inevitable nagging feeling that we’d forgotten something.

We stopped off at the top of the Ribble Link staircase to say goodbye to Dave & Kate on Bosley who were doing their crossing back down to Tarleton and the main system that day. 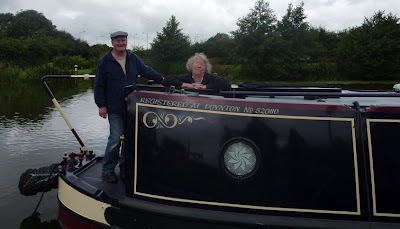 They were moored at Cadley, so we walked down and cadged a lift back. Bosley is a Braidbar Boat; less than two years old and absolutely gorgeous.

At 62’ Bosley has to go backwards, not only into the staircase, but under the bridge and into the top basin as well. Not an easy manoeuvre at the best of times and even trickier with a cross wind. With about 20 years boating under his belt Dave made it look easy.

After wishing them good luck on their voyage we drove to Manchester, where Ann-Marie had an appointment at a hairdresser’s, then carried on to Heather’s house near Grantham. Heather started dancing with Bourne Borderers at the same time as Ann-Marie and has been one of our most favourite people ever since. In her typical generous style she’d allowed us to invade her house and abuse her kitchen for three days while we produced 170 odd cupcakes. And she took us on a tour of Grantham’s supermarkets. Twice. In the evening we went to Smiths in Bourne and met up with some of the other members of BB. It was lovely to see them all again and made us feel very warm and cosy inside.

Thursday. In the morning we made a dozen trial cupcakes, with different insides and different toppings, so that Frankie could decide which she wanted when she arrived later that day. 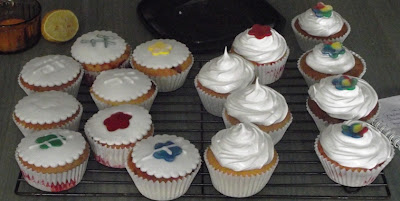 In the afternoon we went for a walk around Denton reservoir, which is a feeder for the Grantham Canal. Heather said she’s never seen it so full. The canal is at least 10 years from complete restoration, but with the surge of national interest that the launch of the C&RT has created, its future is a lot brighter. There may yet come a day when we can visit Heather by boat.
When Frankie arrived we immediately accosted her with cake. With hindsight, asking someone to taste-test a dozen big cupcakes when they’ve just driven for two hours was probably not the wisest plan we’ve ever had, but she did her best, bless her. In the end she chose the strawberry coolie mix with the Italian meringue topping.
In the evening we had a superb barbeque in Heather’s garden and even after the bun-fest in the afternoon ate far more food than was good for us. This set the theme for the following three days.

Friday. Turning Heather’s kitchen into cupcake central was a piece of cake! (Did you see what we did there?) Using two ovens and four bun trays we soon had every available work surface covered in cooling confectionary. Dave did the mixing while Ann-Marie and Frankie took care of case separation and bun rotation. Seven batches later all the baking was done and we started on the toppings. Italian meringue takes a lot of whisking so the well-oiled machine slowed down a bit, but by 7:30pm we were all done, packed up and ready to go. We can’t thank Heather enough for her help and generosity. Friends like that are rare and precious. Hopefully she’ll eventually find something to do with 40 egg yolks.
We got to the Bateman’s Brewery Campsite in Wainfleet at about 9pm, which meant putting our new tent up in the dark. Another lesson in Hindsight. Many of the wedding guests were already there, some had arrived on Thursday, so there was a terrific welcome in the bar.

Saturday. Due partly to an excess of adrenalin, and partly to it being especially bright in our tent at 5am, we found ourselves wide awake. Trying to kill some time Dave practiced his speech 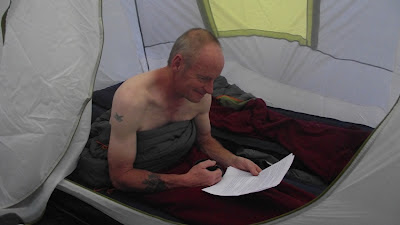 while Ann-Marie did impressions of the bride. 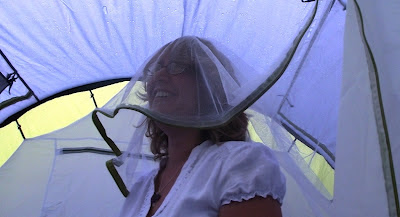 At 11 o’clock on Saturday we stepped out into the amazing world that is Planet Frankie. There is only one word that fits Frankie & Harry’s wedding. Fabulous. Absolutely Fabulous. Although the wedding party itself was quite a small portion of all the people camping, a lot of the others came into Boston to be outside the registry office when the bride arrived and were there to throw confetti when the new Mr & Mrs Brookes emerged. There was a short pause while a thunder-storm passed overhead, then, to the amusement of Boston’s Saturday shoppers, we processed across the market place to an Italian restaurant.

Later on, back at the brewery, there was a very good hog roast, followed by the formalities. The speeches went down well; both Dave & Paul spoke as Father of the Bride, followed by an exceptionally emotional tribute by Harry which had everyone reaching for the tissues. Max, as Best Man, finished it off in style, then the band struck up and we filled the dance-floor till midnight.

There are plenty of photos on facebook, so we won’t fill up your browser with lots more, but here are a few that we especially like. 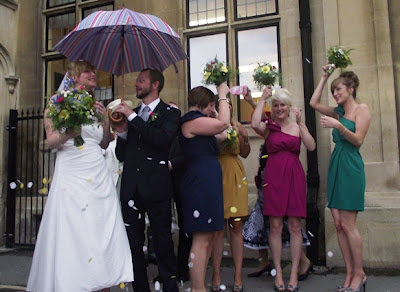 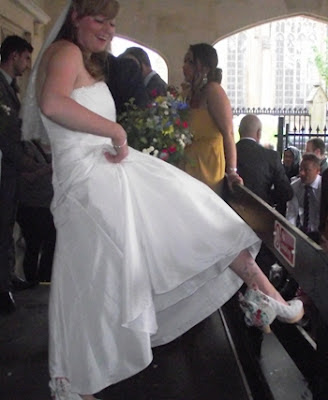 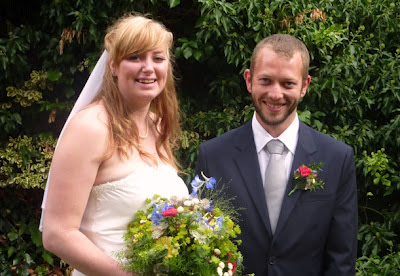 Sunday. Continuation of festivities, albeit slightly subdued. There were trips out to the seaside and other places, then a local chap with a guitar kept us entertained in the evening.
We finally headed homeward on Monday, stopping off at Anne’s in Chesterfield on the way.
As a family gathering it was a resounding success, all Dave’s sisters were there, along with nearly all of their off-spring, as were Ann-Marie’s Mum & Dad and all of theirs.

One of the best things about the weekend, apart from our little girl getting married, is that Ann-Marie can now reveal to the world what has been occupying her every waking moment since New Year. 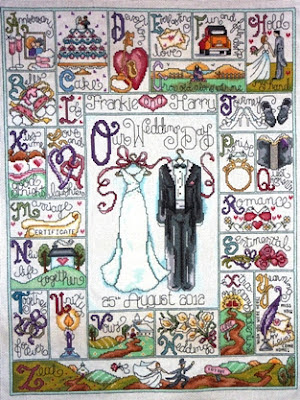 Rather stunning isn’t it? If she’d known before she started it just how big it was, the happy couple would probably have got a toaster instead.
This is how it got dried after we washed it. 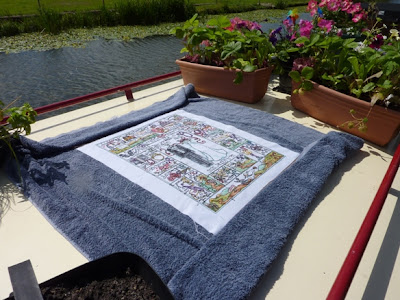 We got back to Glasson in the evening, buzzing from one of the best weddings ever, but very happy to be back in our little boat and our own bed.

The weather forecast for Tuesday was a bit windy but dry, so we decided to take Legend back up through the locks and onto the main line again. Getting off the wall in the basin against the wind was a struggle, the locks on the Glasson branch were really hard work and the wind just made them harder and there was so much weed in the water that at one stage we lost all forward motion and Dave had to go down the weed hatch to clear the prop of this stringy stuff. 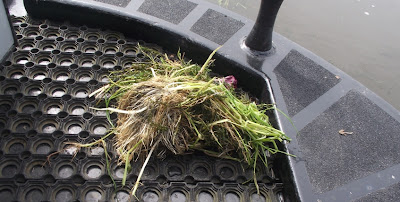 By the time we got up to Galgate we’d both had enough so we found the first free mooring, stopped, lit the fire and slobbed out in front of a film.