What a lovely little town Garstang is! It’s got that great community feeling that you only get in busy, well supported small market towns. There are flowers everywhere and it comes as no surprise to find it’s won Britain in Bloom gold awards. The Lancaster canal runs along the southern end of the town and is nearly all seven day visitor moorings with lots of boats coming and going all day. It’s the perfect place to leave Legend while we go to Edinburgh.

The Squirrel is back together again; the collar and reducing ring are in place and sealed, 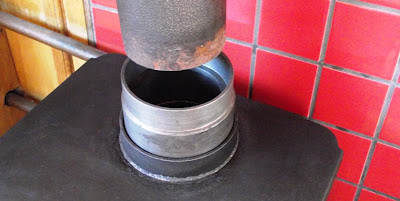 There’s a new rope seal on the door, a new grate holder, the chimney is all rubbed down and a there’s a lovely coat of stove blacking over the whole thing. It looks as good as new and certainly a lot better than we’ve ever seen it. 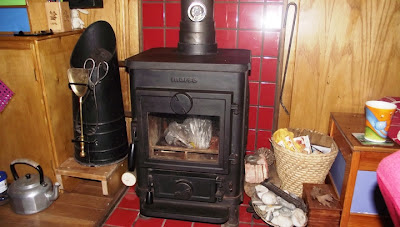 The only other repair that it needed was where one of the little screws that hold the glass clips in the door had sheared off and had to be drilled out and tapped to the next size up. As a preventative measure, Dave did the other one at the same time, so hopefully it’ll now go on for a good few years with nothing else major needing doing to it. Having the time to plan a job and then do things properly is one of the joys of this lifestyle.

A little mystery that’s been annoying us for a while has been solved just recently. We’ve had a damp patch in the front corner of the boat where a small amount of water has been soaking into the floorboards. Ignoring it hasn’t worked, so we finally got round to some proper detective work. A process of elimination eliminated all the obvious things; water pump, tank filler hose, plumbing connections etc. and left us scratching our heads. Then we stopped at a water point and filled the tank, which is when we discovered that there is an air vent pipe which comes out of the top of the water tank and instead of going outside or up through the deck, it ends above the middle of the tank below the level of the filler. When we fill up the last pint or so overflows through the vent pipe into the top of the tank and runs down the side onto the floorboards. We’ve aquired a length of plastic pipe to fit over it so we can raise the end higher than the filler and cure the problem, all we’ve got to do now is squirm into the gap between the well deck floor and the tank to fit it. Has anyone got a small boy they’re not using?

In the spirit of the Olympics we did our own biathlon this week; the canal meanders around contour lines so in order to recce the next section we did a cycling short-cut of about five miles to a bridge, then chained the bikes to a fence and walked another couple of miles up to the junction with the Glasson branch. This 2½ mile long branch drops down through 5 locks to Glasson dock on the River Lune estuary. There’s a basin and marina down there and visitor moorings and we plan on staying for a few days next week. On the far side of the junction in Galgate we found a cafe with outside tables in the sunshine, just perfect for a pot of tea and a sticky. How very convenient.

As the weather took a turn for the better we made the most of it and had a grand day out. In the morning we climbed a Pennine – that is to say we went up enough to get a view;

you don’t want to overdo these things – then in the afternoon took ourselves off to the sea-side. Cleveleys sounded like a nice spot for a cream tea, 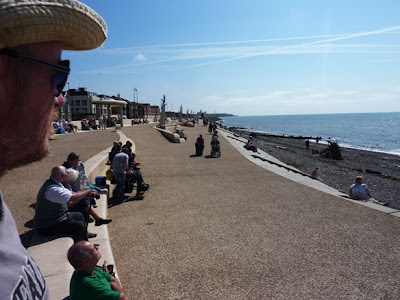 and so it turned out to be.

We love it when a plan comes together, so this extended weekend has been a delight. With the precision planning of a military logistics corps, we set off on a Round Trip of Relatives in the North. Dave’s Auntie Margot, along with Cousin Richard & Jill live in Destination No.1; Carlisle. We went via the Lake District, just a quick detour through and a lunch stop by Basenthwaite Lake. 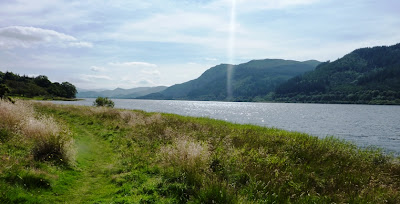 As an added bonus Phllippa, Elizabeth, Bernadette and her kids were at Carlisle as well, so there was a house full of raucous Woods sitting round the dining table in shifts and fighting over Auntie Margot’s Yorkshire puddings. Dave felt as if he was six again, he said it was so much like the old days it was scary. 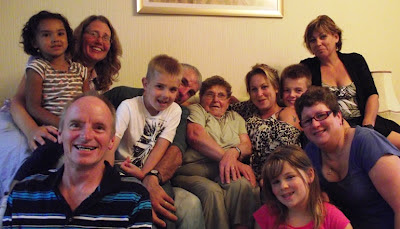 Destination No.2 was Edinburgh, where Aussie cousin Libby was singing at the Fringe. Uncle David, Liz, Rosalie & Mike were also up from Down Under to give support and see a bit of the UK. Arriving in the middle of the Fringe is probably the most bananas way to see Edinburgh for the first time. 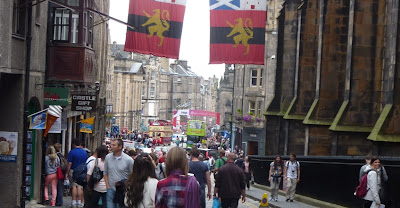 We rendezvoused in the city and had lunch sitting round a table on the pavement on the Royal Mile, surrounded by all the grandeur of Scotland’s majestic architecture, and the most surreal and bizarre street performers in the world. In the evening we went to the Gilded Balloon to see Libby and the rest of “Lady Sings it Better” who have been described by one Fringe critic as “An explosion in a cupcake factory.” Gobsmacked, we were. David & Liz are duly proud of their Daughter and her cohorts who have been getting five star reviews and were invited to perform in The Best of the Fringe. 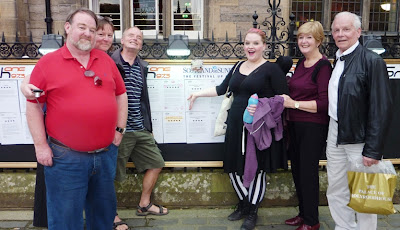 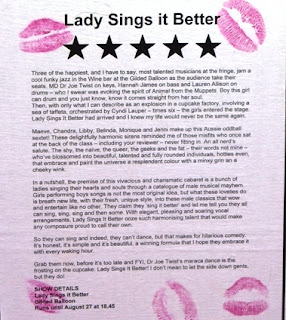 Go on facebook, twitter, whatever – spread the word. The after-show party was a meal in a pub before we departed up the A90 towards St Andrews and Destination No3.

Between the wars the Wood family in Sheffield made a concerted effort to populate the country with Marys, Christophers and Johns. At any family gathering, when we’re not sure to whom we’re talking, we use one of those and ask where they were evacuated to. Never fails.

Dave’s Mum was Mary Wood. Her cousin, also Mary Wood, (see what we mean?) now lives in St Andrews and after a quiet night in Glenrothes that’s where we’re off to today.

Like you, we found the odd bit of water in the cabin bilge from time to time. We checked all the pipes we could see. Squirmed around to check some of the ones that we could not easily see. All to no avail. Then one night whilst filling the water tank I forgot about leaving the water pipe turned on. When the cabin bilge pump turned on we went for a look under the floor. Several inches of water had accumulated. Then I remembered the pipe left filling the water tank! Like you, we have an overflow/breather pipe on the tank top, that vents inside the boat. Unfortunately, it is a big strip down job to fix.

Hi Mike, we've managed to cure it by pushing a piece of plastic pipe onto the end of the steel one and bringing it through the bulkhead into the cabin where it's now fixed with it's open end above the filler. It was a bit of a stuggle involving a head-torch, a long screwdriver and some profanity. The added advantage is that there is now a small amount of water in the plastic pipe which acts as a vapour lock for the tank.