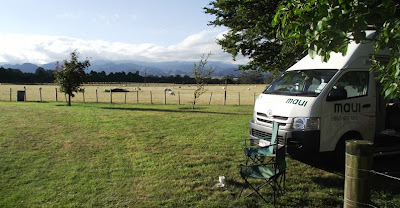 We had breakfast looking at the mountains and the sheep, then drove into Norsewood and had a very interesting visit to the museum. 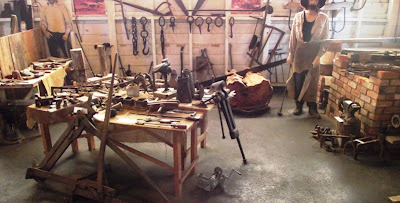 We stopped in Waipukurau for shopping and an on-line session in the library then carried on up Highway 2 straight through Hastings and out along the coast to the end of the road at Clifton. From here there is a 10km walkway along the beach to the Cape Kidnappers Gannet Colony. There are tractor and trailer tours, but we thought it would be nice to walk. It’s only accessible at low tide, and if you’re walking you need to start off within a couple of hours of high tide in order to get back in time. So, without planning it or anything, guess what time we turned up? Yep, 2.15, bang on high tide. Just enough time for a brew and a snack, then off we set. 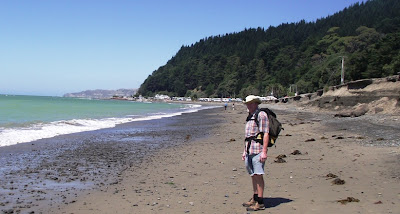 The colony is 2km round the other side of the headland you can see in the distance.
It was slightly unnerving at first because the extremely high cliffs we were walking beside are very obviously eroding at a rate of knots, 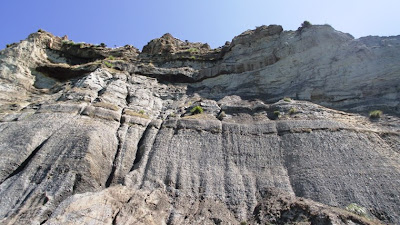 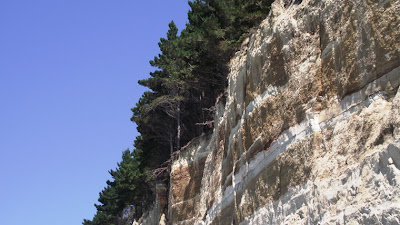 but after we’d clambered over a recent land slip and lived to talk about it, we got braver. 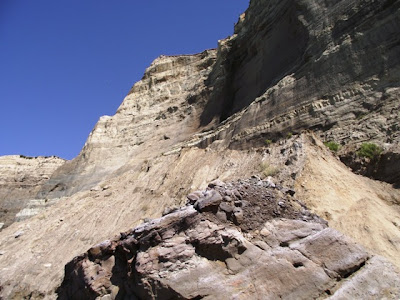 About half way there were overtaken by a bloke with on a quad bike; when we caught up with him he’d parked up and was waist deep in a rock pool fishing under the water with his hands. We asked him what he was after. “Sea Eggs.” He said, “They’re like spiky oysters; you just break ‘em apart and...slurp!” 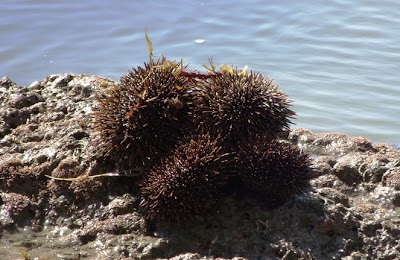 An hour later we arrived at Black Reef, which is on the headland. There were lots of gulls and terns here as well as a small gannet colony, and we stopped for a bit of a rest. 2 km further along the beach the path started to climb and zig-zaged up the hill to a plateau 1100m above the pacific. Up here is the main colony of over 1000 birds, who didn’t seem at all bothered by the 4 tractor loads of people who’d turned up just before us. 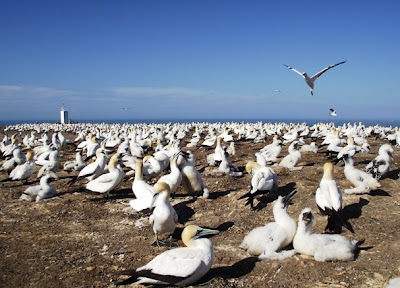 This year’s chicks had all been hatched in the previous few weeks and were all pathetic wobbly fluff balls in various stages of moulting, and all still totally dependent on both parents. Up close they are stunningly beautiful birds, majestic and graceful in flight, but like an upturned sack of spuds when they land. They have incredible body language; lits of beak rubbing and head bobbing. We could have watched them for hours, only we were constantly aware of the tide and, quite frankly, the smell is atrocious.

On the way back we came across this, which hadn’t been there earlier on. Ooh-er! 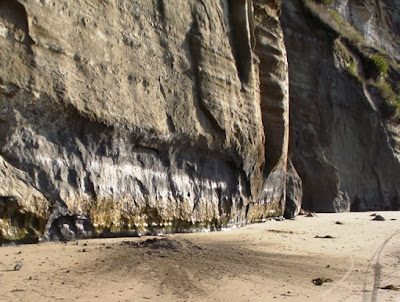