This week we can report some actual travelling! We've just come back from another terrific weekend. On Friday night Ann-Marie packed up the van and went to bed in it; the idea was that when Dave came home from work at 3am we'd go straight to Holme Fen so Ann-Marie could join Pig Dyke Molly for some May Day Dawn dancing. It's only an hour or so away, so we thought we'd get a couple of hours kip before the rest of the side turned up. But by the time Dave had got home, showered and changed and we'd managed to not find Holme Fen straight away we'd only got about half-an-hour before the sun and everyone else appeared. 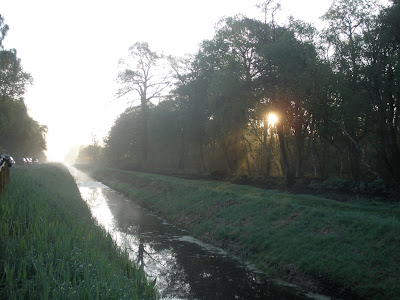 It was wonderful morning, the music and the sunbeams filtered through the lazy mist in the trees while the dancers twirled around each other. Ann-Marie did loads of dancing and Dave was quite moved by the whole experience, but that could have been the lack of sleep and the cold!
Then, after a quick Bucks Fizz, or orange juice for drivers, the rest of Pig Dyke went for a day of fun fun fun in Cambridge. We set off in the opposite direction to join Bourne Borderers at the Upton-upon-Severn Folk Festival. There were at least fifty other border morris sides there, which we worked out meant about six or seven hundred big sticks being wielded around most of the day; it’s only a little place so you had to keep your wits about you! We were reasonably lucky with the weather considering the forecast, which was dire. The rain held off till about five, then it threw it down all night, which meant our walk down to town in the evening to see the outstanding Mr Sid Kipper was very wet. The walk back was even wetter, but we managed to get to sleep and it stopped around breakfast time. By then our guest room was occupied; Heather’s tent was underwater when she got back to it, so she came aboard the Kon-Tiki for the rest of the weekend. Thank you for your company and food Heather, we’re glad we were able to help.
Sunday was chilly but didn’t put anyone off and the procession through the town was brilliant. Dave even put on some face paint and joined in, and believe it or not, did some dancing. He’s blaming lack of sleep again but no one believes him, he looked far too much like he was enjoying himself. Sunday night saw us back in town to see another concert, and then on Monday morning two more dance spots, again with Dave joining in. 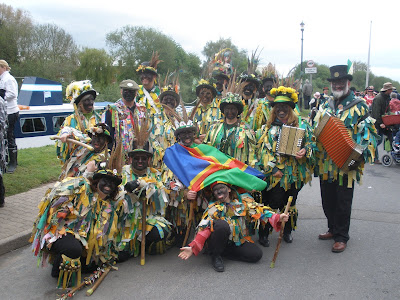 To top it all off we got a phone call on Saturday from the estate agent about another viewing. We’ve learnt not to get too excited, but it’s something to look forward to!
Added to lists - 4. Ticked off lists - 1. (Looks worse than it is; three things are the result of spending a weekend in the van.)
at May 04, 2010