It’s been a bit of a dash across Yorkshire for the last few days. After passing the amazing array of weird and wonderful watercraft moored downstreamfrom York , we arrived at Naburn the day before our tidal crossing was booked. We were joined later by Shambles and Mandakini, plus Chris & Jan on Squeezebox who were all going to be on the tideway with us. The gates were due to be opened at quarter to three in the afternoon, so just like Selby on the way up, we had the morning waiting around, checking and re-checking everything and drinking far more tea than was good for us. This time of course it was a lot more sociable; our little gang had been together for a week or so and we’d all become quite friendly.

By three o’clock a little line of five narrowboats and a  plastic cruiser were out on the river. 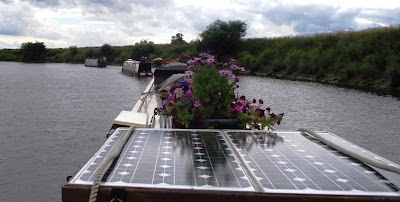 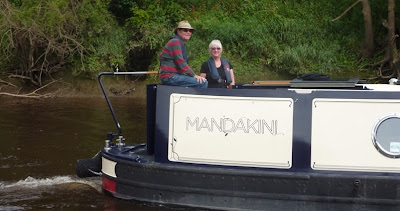 For the first hour or so we were pushing the tide, (The lock-keeper lets you out before high tide so that there’s still enough water in the river when you get to Selby to get you over the lock cill.) but after it turned – which happened over a period of about 5 minutes – we started picking up speed. Legend and Shambles were the last two boats in our flotilla,

and as there is only room for two boats at a time through Selby lock we backed off and let the others get well out of sight, that way there’d be time to get it set for us. The GPS was reading 5.9mph as we passed under the swing bridge at Cawood; we’ve never been that fast, ever! 45 minutes later we passing the Hovis flour mills and rounding the final turn before the lock 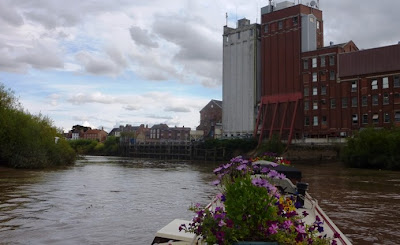 Doing a right angle turn into a lock from a flowing river is a test of nerves. The theory works like this: you are travelling downstream on the opposite side of the river to the lock. Just before you get there you turn the boat 180 degrees so you are facing upstream. You adjust your speed to that of the water so you are stationary with the back of the boat level with the upstream lock wall. You steer in the flow so that you are about a boat length from the bank, then stay like that till the lock-keeper opens the gates. In our case that was about 10 minutes. When the gates are open you slow down a fraction and turn towards the lock. The current turns the nose and when it just clears the upstream wall you put the power on and go in, watching out for the area of dead water just at the entrance which makes almost everyone bump the wall. Dave had been rehearsing the whole thing in his head ever since we’d left Selby, and it’s fair to say he was a bit hyped up about it. We had slight concerns about Legend’s power capabilities; could she stem the tide enough to hold our position? In the event it was fine. In fact it was bob-on perfect, and we’re very proud of our efforts. As far as power was concerned we were surprised how little we needed to stay still; the 10 minutes we spent stationary were very educational, and stopped us using too many revs when we went for the lock. Arthur went for the alternative method, turned below the lock, then pushed upstream into it and came alongside. It all looked incredibly professional. 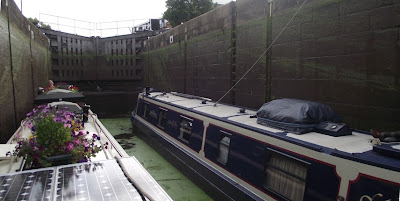 Of course there are things you can’t plan for, like a tree coming down the river, or a sudden gust of wind, but we’d be more than happy to do that again and it’s made Salters Lode, a similar set-up between the Bedfordshire Ouse and the Middle Level, a lot less scary.

As we were all moored in Selby basin for the night, Gordon and Helena invited the intrepid gang members aboard Mandakini for Celebratory Drinks & Nibbles. We had a smashing evening swapping stories and laughing a lot. In the morning we all said very emotional goodbyes and we chugged off through the swing bridge and down the still very weedy Selby canal.

We had another night at Beal and in the morning felt an irresistible urge to re-visit the tea room. Just as we got back to the boat Shambles came through the lock so we did the last bit up the River Aire to Knottingly with Arthur behind us. He was turning left down the Knottingly and Goole Canal while we were turning right back on the Aire & Calder Navigation towards Woodlesford, so we had yet more goodbyes, which is when Mandakini turned up. Gordon and Helena were going the same way as us, which turned out to be a wet, windy and choppy voyage through Ferrybridge flood lock and on to Castleford. 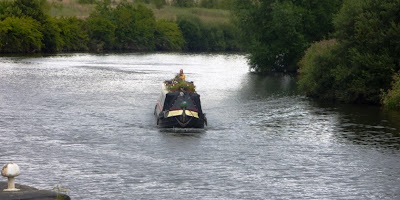 On one of the wilder stretches by Ferrybridge Power Station, a big gust took the Chinese Hat off the chimney, and the little lantern off the top of the cratch cover, and dumped them both in the river. Neither of them were physically attached to the boat, which of course they should have been – once again hindsight is the greatest teacher of all; their replacements will be – and it just goes to show that although we might have looked good getting into Selby, we’re not really all that river savvy. Yet.

After such a windy crossing it was nice to get a sheltered mooring at Castleford and we had a very peaceful evening. The next day we were off and back through the big bent Castleford flood lock and up the last bit of open river to Lemoroyd and Woodlesford. Chugging our little boat up the majestic Aire and Calder Navigation is lovely but at the same time a little sad. You go past Alerton Bywater where the National Coal Board HQ was, past the open cast mines and coal wharves, once a hive of heavy mining industry, now nature reserves and bird sanctuaries. Giant coal barges used to make sense of this water way – now little pleasure boats bob about on it like Pooh-sticks. Boating on England’s inland waterways is a glorious thing to do and we love it to bits, but we are careful to remember the heritage of these cuts and navigations. They weren’t built for us.
at August 28, 2013