It took about 3 hours pushing against the river to get to Linton. When we got there we found a plastic boat tied up to the far end of the rather short lock jetty, its G&T swilling occupants blithely ignoring the “For Lock Operation Only” sign. Due to the strong current sweeping round the bend from the weir we had to come in at a fair lick and we were only going to get one stab at it. As our big steel boat came rather rapidly towards their small fiberglass one, they began to appreciate just how vulnerable their position was, and that not spending £6 for a day on a proper mooring might be about become a rather large false economy. For some reason they all got off. We got it bang on perfect; we kissed the jetty, Ann-Marie stepped daintily off and demurely swung the front rope around a cleat while Dave gave a blast of reverse thrust and we stopped about 4 feet from their very expensive looking stern, parallel to the jetty and with a quarter of our boat still out in the river. They all stood around pretending they hadn't been at all worried and laughing much too loudly. We casually got the hose pipe out, then wandered off to set the lock with the smug air of salty old sea dogs who always land on jetties perfectly. 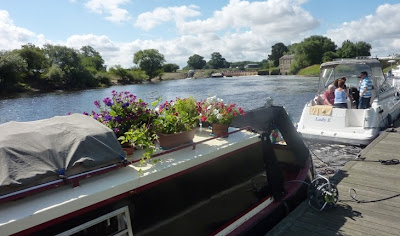 If they knew the truth they wouldn't have been laughing at all.

Above the lock were some 24hr moorings so we stopped for a while to have lunch and empty the loo then, as it was a nice day, pushed on to Boroughbridge.
Just above the mouth of the River Swale we were caught up by Gordon and Helena on Nb Mandakini so at Milby lock we decided to see if we could get both boats in together. As it’s a river navigation there’s no saving to be made as far as water is concerned; it’s all going that way anyway, but it’s worth the saving in time and effort. Our only concern was length; the official length on the Ure (which is what the Ouse becomes above Linton) is 57’6” although with a beam of 15’ you can get a 60’ narrowboat in easily on the diagonal. Legend is 57’ plus fenders and Mandakini’s a bit longer, so we thought it might be a bit of a squeeze but as it turned out we were fine, we just had to lift our rear fender to get the bottom gate shut.
At the Boroughbridge visitor moorings at the end of Milby cut we were re-united with Evolution. We also met Arthur on Nb Shambles. (For the next week or so Legend, Evolution, Shambles and Mandakini leap-frogged each other all the way up to Ripon and back down to Selby.)
There was heavy rain forecast for the following day, so we decided to stay put. We put our macs on and went for a walk, learning all about the 1322 Battle of Boroughbridge, the Roman town that is now Aldborough and the Devils Arrows along the way. 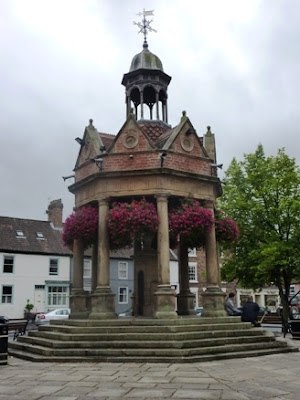 Before it was bypassed, first by the A1 trunk road then again by the A1M, the bridge at Boroughbridge carried the Great North Road over the Ure. It’s strange to think that a fairly quiet urban B-road was once the main artery of the country, although we suspect there is more traffic on it now than there was in its glory days. For the most-part the rain that was forecast didn’t materialise, at least not where we were, and we came home relatively dry clutching a curd tart from the baker’s in the town. In the afternoon we pushed the boat across the canal to the conveniently placed Canal Garage to fill up with diesel. We put 150 litres in; the last fill up was in Preston in October so the answer to FAQ No.4 is “Not Much.”

Martin and Yvonne had set off for the Ripon Canal first thing that morning; they rang later on to say they’d got a bit damp boating, but they were safely on the cut when all the accumulated rainfall made its way down the catchment area and sent the river up again. Kim and Luke found us again that evening and came aboard while we watched the weir go from this 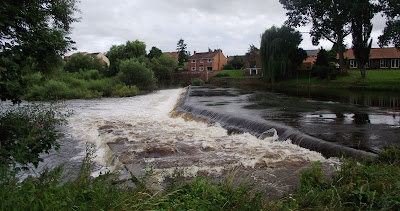 and the water rise up to the mooring rings. We looked at the live updates on river levels on the Environment Agency website, and during the night we were monitoring the situation. In the morning it had gone down a bit, but one look at the flow on the river put us off moving till after lunch when it had calmed down somewhat. At about 1pm when we ventured out into the stream we were pushing hard but making headway; 2.2 mph according to the GPS, with some more umph left in the Lister if we really needed it. At Westwick Lock we wondered if it might have been wiser to leave it another couple of hours. Just before we turned the bend into the quarter-mile straight before the lock someone emptied it. The extra water, plus the increased current in a narrow stretch turned the bend into a swirling, foaming cauldron into which we ploughed headlong, sending up a series of spectacular bow waves and reducing our forward momentum to about zero. Dave pushed the Morse all the way and with as much of our 26 horse-power as we could muster, we stalwartly plodded on upstream to the landing stage. Half the landing stage was paddling-pool depth, 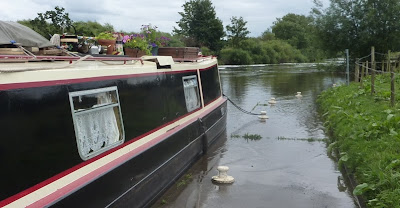 but that was pretty good; Mandakini, who’d set off a couple of hours before us, told us that when they got there it had been waist deep, and they were fortunate that there was another boat coming down so they didn’t have to get off. Two miles further on and we were through Oxclose Lock and onto the safe waters of the Ripon Canal. 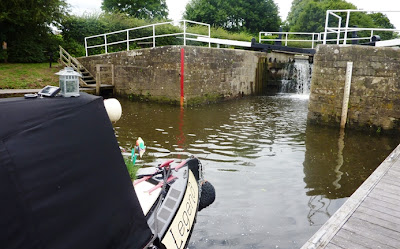 It’s only a couple of miles long and a dead end to boot, but it’s lovely and before the Millennium Link was made up to the Lancaster Canal, it was the most northerly point you could get to on the system, so it’s a kind of mecca. There are only a handful of moorings, but Martin & Yvonne were already moored up in Ripon and had offered to return the favour and let us go alongside so we knew we’d be ok.
Ripon is lovely. We knew it would be our kind of place; we have this love affair with little cities. Truro and Ely especially, and Ripon didn’t disappoint. 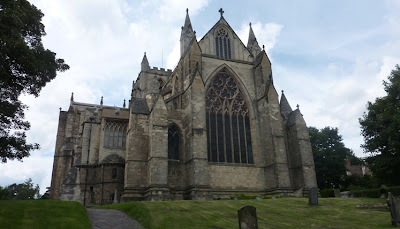 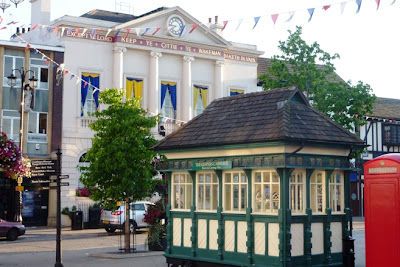 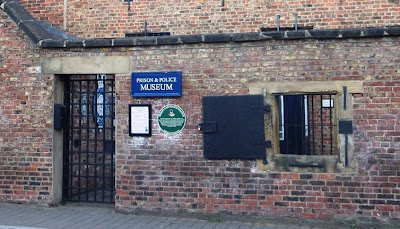 The highlight, as everyone who we met told us, is going along to the cobbled market square at 9pm to hear the Wakeman sound his horn; a tradition that has happened every night for 1100 years. 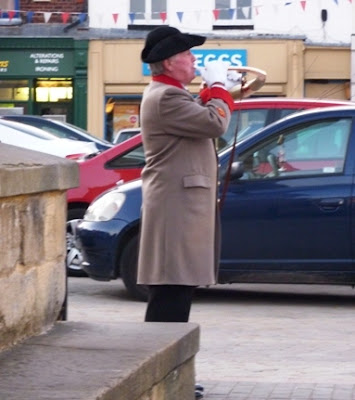 It’s worth going to see, he does a little routine afterwards and asks everyone where they’re from and tells them all about the tradition, why it started and what it means. As he said, it’s not the same bloke, and not even the same horn - although they do still have the original - but the same place and time. Every night without fail. We found that rather awe inspiring.
We also went to the Spa, now a good old fashioned swimming baths, but with the original Victorian tiling on the exterior and in the entrance hall. 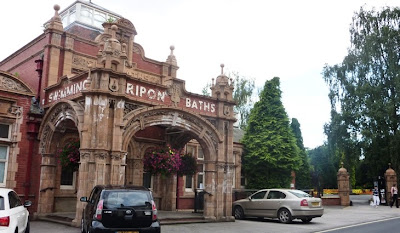 It only took a few lengths and a bit of messing about to remind us just how long it is since we’ve been for a swim – on purpose anyway – and we’ve vowed to try and do that instead whenever we get the urge for a cream tea. It’s not going to happen, we know, but it made us feel better.
After our allotted 48 hours we cast off, turned round in the nicely restored Ripon Canal Basin and headed back towards the river. Our return tidal trip from Naburn to Selby was booked for a the neap tide on the following Thursday, so we had a bit of time to kill meaning short hops and two night stops. The first was just above the well-tended Oxclose Lock before dropping back onto the Ure which, after a few dry days in the Pennines, was now at its lowest level and a whole different ball game. 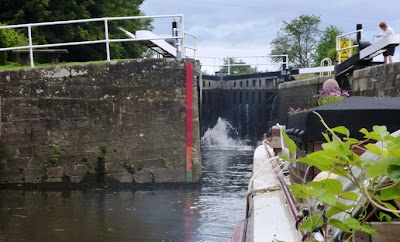 Calm and gentle with a slight following breeze it gently eased us on our way back to Westwick Lock where the landing stage was now about 2’ out of the water. 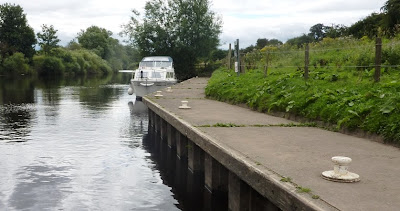 Westwick to Boroughbridge was just as uneventful and Legend, along with Mandakini and Shambles, had two nights moored below the towpath rather than above it. It’s amazing how different a river can be from one week to the next or, as we found out at Linton, one moment to the next if you’re not paying attention. Gently drifting down the river towards Linton, Dave got lulled into a false sense of security and distracted by all the other boats and he missed the turning into the lock channel, sending us towards the weir. He had a go at turning round but that was the moment the wind picked up and with plastic boats moored on both sides we didn’t really have enough room. With the weir barrage approaching at an alarming rate he suddenly remembered something he’d read once, straightened up and reversed directly into the wind. Thankfully the theory worked, the wind kept us in a straight line as we backed out of danger, and with slightly elevated heart rates and another chapter in our book of stories to amuse friends in pubs, we turned into the calm waters of the lock channel.  We had a little wander around, looked at the village, looked at the jetty below the lock and got rained on; usual boaty stuff. Later on Arthur turned up and as there was no more spaces on the moorings we pulled Shambles alongside for the night.


The next morning we left the boats breasted up; Ann-Marie and Arthur worked the lock while Dave brought the pair through together, then we set off to York, Shambles leading with Legend behind. With a bit of shuffling there was just enough room for both boats at the Museum Gardens. It felt like being back home.
at August 28, 2013