Although we didn’t realise it at the time, our trip from Beal Lock to West Haddlesey was particularly uneventful. We casually cruised down the river with no commotion whatsoever,

turned into the open flood lock at the start of the Selby Canal, 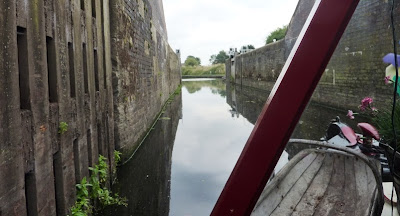 gently moored up on the floating pontoon and naively presumed it was always thus.

Martin and Yvonne on NB Evolution, who we met at Castleford and who have considerably more boating experience, did the same journey the following morning and arrived at West Haddlesey shortly after we left. We met them again at Selby and their journey had been the exact opposite. They told an alarming tale of rising water, strong currents and wind pinning them to lock moorings. We’re rapidly learning about the unpredictable nature of rivers and it’s certainly making life exciting, if a little tricky to organise.

We, dear reader, also have a tale of the riverbank. We went for a walk back to Beal to recover our car. The footpath marked on the map alongside the Aire beckoned, and for a fair way - despite being overgrown and unused - it was quite delightful, offering views of several power stations and some very entertaining water-skiing.

It was all going very well right up until we met the bull. Not just any bull. No, this one had a bevy of lady-cows to show off to and all his offspring to be a role model for. We saw him just as he saw us. He got up. He had a ring through his nose. He had horns. And he was swinging things that wouldn’t have fitted in a builder’s bucket. As we made a hasty retreat he was nudging his heirs and mistresses out of the way, no doubt to spare them the sight of the bloody mayhem he had in mind. After about 200 yards it was apparent that he’d decided, on this occasion, not to gore us to death so we slowed to a rapid, panicky walk and started breathing again. Retracing our steps and taking the long way round involved passing - or more accurately, not passing - a lovely tea room. 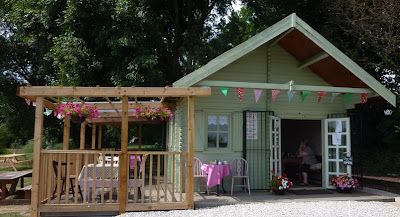 We think we ought to write to the farmer and, rather than complain about a bull on a footpath, thank him for a delicious cream tea.

So far our boating plans have more or less held up. Karen and Andrew duly arrived at West Haddlesey and moved aboard for a week. The following afternoon we boated the entire length of the Selby Canal - all five duck-weed filled miles of it 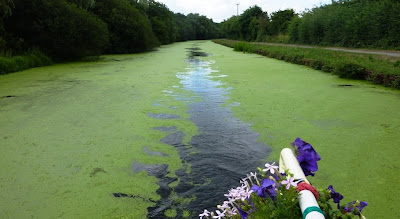 went through the swing bridge and moored up in Selby Basin ready for our booking through the tidal lock, onto the rather scary looking River Ouse. We arrived just in time to watch a narrowboat leave the lock and head upstream which, as the tide was coming in, was with the current. It looked fast. Karen introduced us to Geocaching, which seemed like fun; poking around under bushes and frisking a telephone kiosk certainly took our minds off the whole tidal malarkey for a bit. We did find two tiny ones and were suitably pleased with ourselves.

The following day our booking was at 11:30. We had a fidgety morning getting ourselves and the boat ready, only to be told that due to flooding upstream it would be unadvisable for us to go. We had a swift pow-wow, then abandoned ship and went to York via the park and ride. Trains, beer, a look at the moorings (which really were underwater) 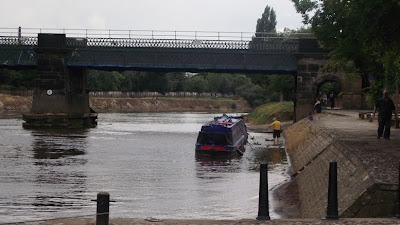 and into ‘Spoons for dinner. Decent enough afternoon.

It was the same story the next day; the moorings at Naburn were still under water, but tomorrow looked hopeful. Being apprehensive and fidgety had worn off; we were now bored and restless. Selby Canal Basin, for all its charm, does not appear on anyone’s top ten holiday destinations. Karen and Andrew went off to spend some time with a friend in Malton, while we vegged out in front of a film. After that Dave went to Anne’s for post and a prescription while Ann-Marie spent the evening aboard Evolution, making friends with Martin and Yvonne.


By 1:30 on Wednesday there was a little reception committee to meet the lock keeper when he came on duty. By now there were nine boats in the basin waiting to go through and we’d all had a butchers at the river which, compared to recent days was now on a neap tide and looked like a mill-pond. After a phone call to Naburn, and to a hearty cheer, he gave us the thumbs up. We went in first with Coramanda, with Evolution and Juliana penning down behind us. Leaving a trail of duckweed in our wake and all up the sides of the lock we finally ventured forth onto the Tidal Yorkshire Ouse. After our exciting but brief departure from Selby the rest of the journey was a bit of an anti-climax to be honest. With our little Lister plodding away Coramanda was soon out of sight and apart from the odd land mark we couldn’t see much but muddy banks and trees, which after 3 hours became a bit samey. The weir and lock at Naburn were a welcome sight and in no time we were through and on our way, mooring in York at about 6:30. Just in time for tea. Even in the rain, arriving in York by boat is spectacular; 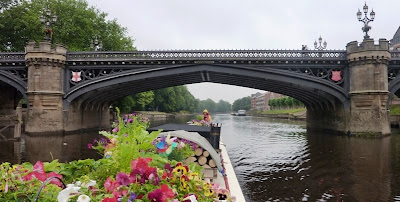 indeed, a waterborne arrival in any city built around its river gives you a first class front row seat in an architectural showcase. Sometimes you have to look beyond the abandoned wharves and warehousing to see the splendour that once was, but not here. York is splendid and the visitor moorings outside the Museum Gardens are perfectly placed to take full advantage of it.

We slotted into a perfect Legend sized gap among the cruisers and the café boat; in the morning when Martin and Yvonne arrived they brought Evolution alongside. 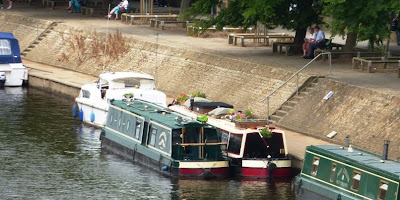 Evolution is a reverse layout and none of our windows overlap, so it was ideal. With our tourist hats on we wandered into York and walked around the City Walls, 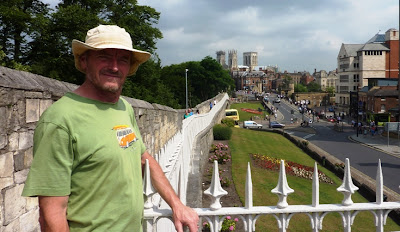 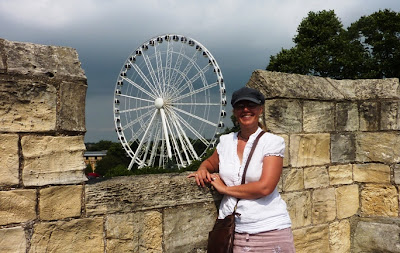 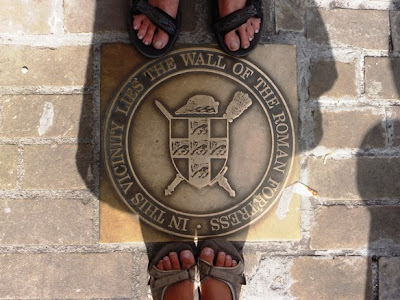 then came back to the boat to meet Karen and Andrew, who’d come back from Malton. In the afternoon we set off again, this time armed with a fabulous book called “The Snickleways of York”, which beautifully leads the reader along a three and-a-half mile wiggly windy walk through all the little secret alleyways that criss-cross the city. 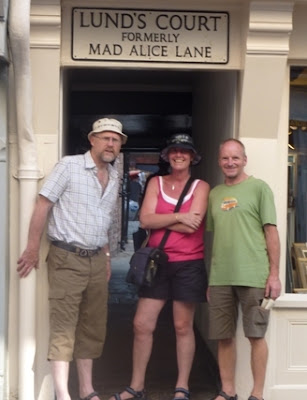 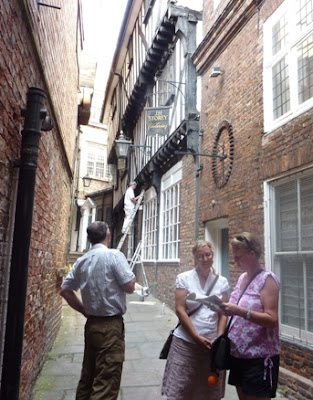 Due to stopping every ten minutes to read something, we only got half of it done before it was time to go back to the boat for a barbeque. In the evening we sat around on the river bank watching the water level get gradually higher up the brick-work, as big bits if tree came past us. We finished the Snickleways walk the next morning then, after an afternoon spent mostly avoiding showers, interspaced with slackening the mooring ropes as the river rose still further, went to Ye Olde Starre Innee for dinner. Kim and Luke, who were on holiday in a cottage nearby, came and joined us later in the evening and we all went on a guided Ghost Walk. It was quite historically informative, which was good, but not particularly scary. The Guy Fawkes-a-like guide had to cut the walk short due to a rather abrupt thunderstorm, but Dave got a good heckle in, so that made up for it.

The next day was Saturday, Martin and Yvonne left in the morning, which turned out to be a wise move; York on a Saturday night is a bit lively and the river was still going up. We had a choreographed succession of guests; Karen and Andrew left, then ten minutes later John and Gill turned up and took us out for a delicious lunch in a converted church. No sooner had they departed than Kim and Luke returned. They accepted an invitation to stay for tea and Ann-Marie casually produced an impromptu roast dinner for four, which, it has to be said, is quite a feat in our tiny galley.

During the night the water level receded, so with the forecast for rain later we set off for Linton and Boroughbridge first thing on Sunday morning.