We had a fortnight at Calverley Lodge before moving down to the visitor moorings at Rodley. This meant leaving behind about a million froglets that had taken up residence between the boat and the bank. 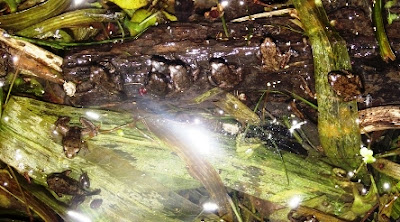 It also put Legend right by the Leeds Ring Road bridge but as we were off to Ely folk Festival for the weekend we didn’t mind. This is Ann-Marie in the middle of a Witchmen Morris Workshop.

She couldn’t walk for a few days afterwards. Star of the show for us was the fabulously talented Lucy Ward. This is the shuttle bus from the festival site to the city. 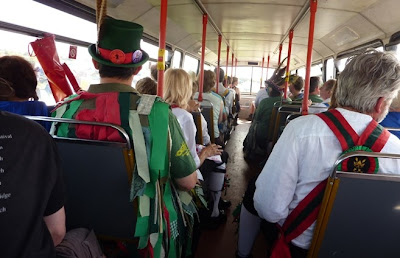 When we got back we found a suspicious puddle in the bottom of the fire. We tried – unsuccessfully – to convince ourselves that it was due to excessive rain, but it never happened last year and in the end an inconvenient truth made itself plain. For the last six months or so the central heating has mysteriously needed topping up more often than it ought, and Dave has been quietly wondering where the water has been going. Now that we’ve had several weeks without a fire the mystery is solved. It’s been leaking out of the rusty back boiler. When we had the fire going all the time it turned into steam and went up the chimney so we didn’t notice. This makes us wonder how long it’s been leaking as we had the fire going more or less constantly all through what we laughingly refer to as last summer.

Between us we wrestled the fire out of the boat and onto the towpath where Dave managed to wriggle the old boiler out. 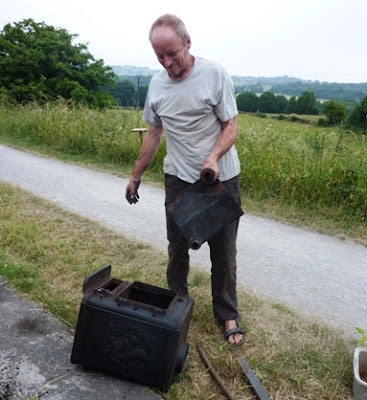 We got a new one delivered to David & Kate’s house and David dropped it off as he was passing in the lorry. Very convenient. 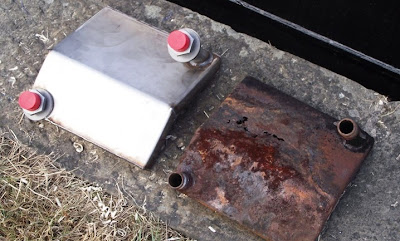 The new one is stainless steel so it should outlast us, if not the boat.

Following the advice in our Nicholson Guide, we left Rodley and went straight into Leeds passing through Kirkstall and Newlay locks in the morning on a weekday.

Apart from the lock keepers we didn’t see anyone but they both told us of their own experiences with crowds of youngsters converging on the locks on weekend afternoons. The weather was glorious and when we got further into Leeds itself at Oddy locks there were a bunch of kids swimming in the bottom lock chamber. They all started to get out when we arrived, but we were stopping for water so we told them they could carry on for a while.

On a tip-off from one of the lock keepers we stopped for our first night in Leeds just above Office Lock on the off-side. 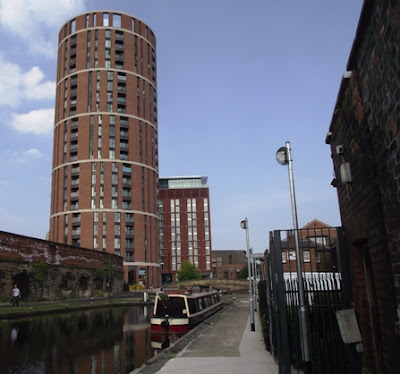 Just below the lock are the pontoon moorings in Granary Wharf which, we were told, charges £6 for two nights, although there weren’t any signs confirming this. The water point above the lock hasn’t worked for several years and makes a handy, and free, overnight mooring. This was to be our last night on the Leeds and Liverpool as the next day saw us drop through River Lock onto the Aire & Calder Navigation. 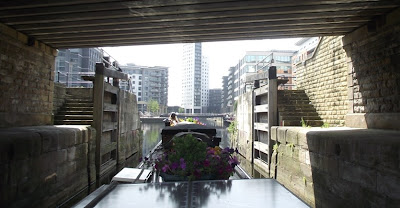 We didn’t go far though, just round the corner into Clarence Dock, right under the imposing Royal Armouries Museum. 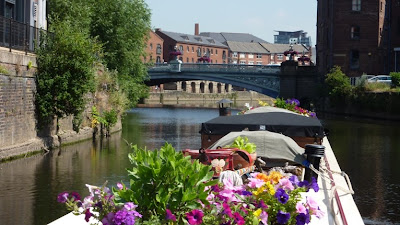 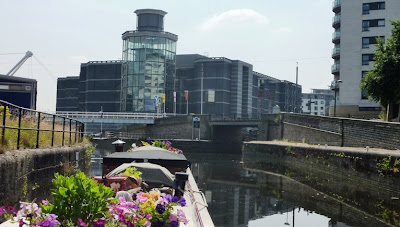 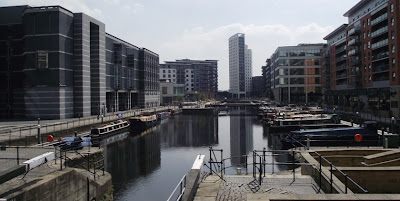 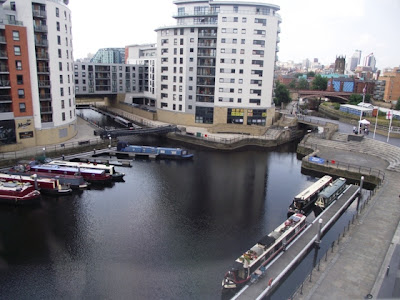 We spent the whole of the following day in the museum and we were thoroughly blown away by the experience. 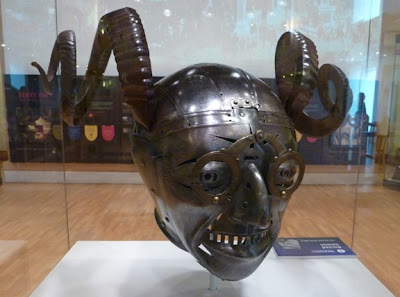 We left Clarence Dock on Saturday morning with John & Gill, some more friends from 2CV land on board. They live near Woodlesford Lock, so they came into Leeds on the train and joined us for a trip down the river. John was born and bred in Leeds so he was able to provide some local history as we boated past the disused loading wharves and through the big river locks. We moored up on the spacious visitor moorings at Woodlesford 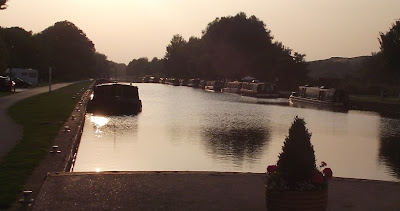 and had a lovely evening at John & Gills house. Gill is part of “Woodlesford In Bloom” who, as well as looking after the beautiful displays around the lock, also do a stunning job throughout this lovely village.

We had intended to move on fairly quickly, but John & Gill made us feel so welcome that we stayed for nearly a week. While we were there we booked our trusty old Punto in for an MOT. It responded by having a complete clutch failure the day before which sent us both into fits of despair; Dave, because he’d only just done one, and Ann-Marie because we’d only just paid £200 for a new back boiler. Fortunately it turned out to be a hydraulic leak from the slave cylinder; a £35 ten minute job. We think our old friend Karma got a bit over excited; John has got a to-die-for garage and she wanted to give Dave a day in there mending something. The next day it was back in and passed, but probably for the last time. It’s got the beginnings of terminal rot between floor and sill, so we’ll keep it for a year or till something big goes wrong then kiss it good bye. We’re not at all upset; it’s done exactly what we wanted it to do, ie. be invisible. We’ve parked it in pub car-parks, side streets, lay-bys and picnic sites for days on end with no worries and no problems. As the MOT tester said, “When it’s worth nowt you don’t worry about it.”

On the other side of the river from the navigation there is the newly established St Aidens bird sanctuary and nature reserve. This used to be a massive open cast coal mine, but after a disastrous breach of the river bank which filled it with water and caused the river to run backwards for several days, nature is rapidly reclaiming it, and apart from one of the colossal drag-lines which act as a reminder near the visitor centre, there is little evidence of what went on there.

We walked around it a couple of times looking at all the coots, grebes, geese, swans, lapwings, buntings and ducks. It is incredibly peaceful in a squawky, honky, flappy, splashy kind of way. And we saw a Marsh Harrier, so there.

From Woodlesford we went through the deep Lemonroyd Lock and on to Castleford. At Lemonroyd this strange looking craft is tethered jus bellow the weir.

It’s called Oblinarc and has six hydroelectric turbines inside.

On the visitor moorings at Castleford we had another serendipity moment, albeit a rather sad one. The very last commercial sand carrying barge came through the flood lock on its way to Wakefield.

We thought it would be worth a photo or two. Then we found out it was on its last trip. It was very emotional watching the end of an era, hearing the skipper and the lock keeper exchange their last Ow do’s as six hundred tonnes of sand and gravel gently slid through the lock. From now on this great commercial waterway that opened up the east of England to trade will only be plied by pleasure boats.

We’ve decided that as we are in Yorkshire it would be rude not to visit York. This means a trip up the tidal River Ouse which, everyone tells us, is not as scary as it sounds, so we’ve booked ourselves through Selby Lock on Monday. So instead of turning right at Castleford we turned left towards Goole and the North Sea. Karen and Andrew are coming to stay on board for a few days and will be making the passage with us. Should be fun.

In the morning we took the car to Beal Lock on the River Aire and cycled back to Castleford. After lunch we set off through Bulholme Lock then followed the river to Ferrybridge, passing the enormous power station (once supplied by coal barges, now everything comes by road or rail), under the original Great North Road bridge then through the flood lock. When the lock cottage was built the view was slightly different.

At the far end of Knottingly we left the Aire and Calder Navigation and turned north east through Bank Dole Lock onto the River Aire. This is a very bendy bit of river that will take us to the Selby Canal. We stopped for one night at Beal Lock where we’d left the car; tomorrow we’ll move up to West Haddlesey where Karen and Andrew will be coming aboard.
at July 27, 2013