It’s actually feeling like summer now. The flowers are starting to attract admiring comments and we’ve had strawberries off the boat roof. We also got sunburnt and were driven nuts by a plague of flies at Dowley Gap, reminding us what a British summer is really all about.

We got to see Jim, Liz and Alan while we were there, they live within walking distance of Dowley, so we managed to rendezvous in various pubs in and around Bingley during the week. Also, David and Kate came over for a very enjoyable evening of fish pie and a game of triv. Sometimes it seems like our life is one big social whirlwind.

We went for a walk through Shipley Glen and over Baildon Moor looking for “Cup and Ring Marked Rocks” which our OS Explorer map of Bradford & Huddersfield assures us are there. 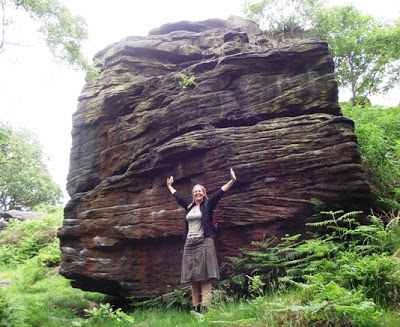 It was a lovely walk but sadly - unless what we thought to be quite ordinary looking boulders were actually some prehistoric artefacts - we failed to find them. What we did find was some Chicken of the Woods; an edible fungus.

David came along as crew member on the trip from Dowley Gap to Saltaire and had a go on the tiller. 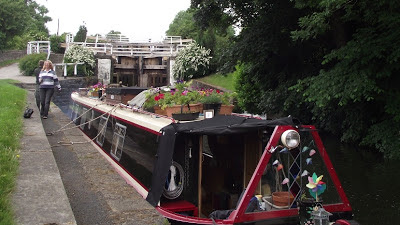 This meant that he was on the boat on his own going down Hirst lock which is a bit leaky to say the least. Legend only just fits in these short L&L locks so to get the bottom gates open she has to be backed right up to the cill, which quite often means putting the back deck into a waterfall. Unfortunately, the one bit of information Dave forgot to give David before his turn at the helm, was to keep the doors shut when you do that, preferably with yourself on the dry side of them. The result of that omission was a thorough soaking in the trouser department and a couple of inches of water in the engine ‘ole. Well it gave the auxiliary bilge pump an outing and occupied the boys for an hour or two when we got moored up! We managed to get onto the one unlimited mooring in Saltaire, between the bridge and the ice-cream boat. 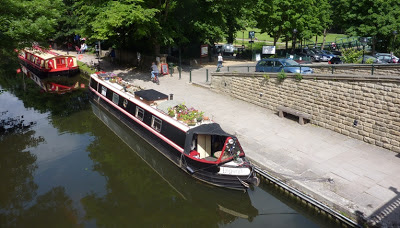 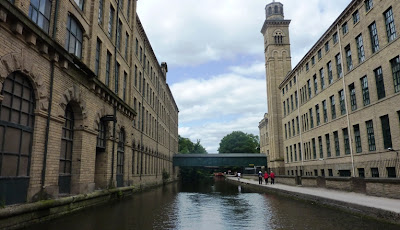 It was predictably busy with lots of interest in what we do, how far we’ve come, where we’re going and all the other FAQs (top of the list, of course, is “How much does one of these cost then?” which is like asking how long a piece of string is.)

After one night in Saltaire we were off, through Shipley 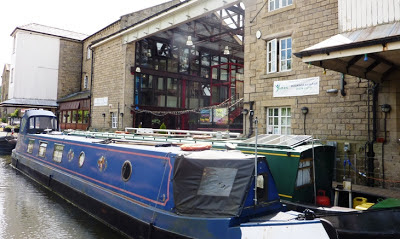 and out into the countryside again. 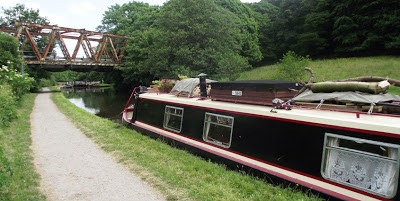 We moored up at the top of Field Locks after a succession of swing bridges, which as usual, all had different designs and machinery. One had Ann-Marie standing in the middle of it whilst winding the mechanism with a windlass, like it was some Victorian merry-go-round. And one, which if a local dog-walking chap hadn’t happened to come along and tell us we needed to jump up and down on it to get it moving, we’d not have opened at all. Actually we would have opened it; we’d have done what several other crews had obviously done before us and given it a gentle nudge with the boat. (A 17 tonne nudge will move most things.) We did the sensible thing and put a notice on it. 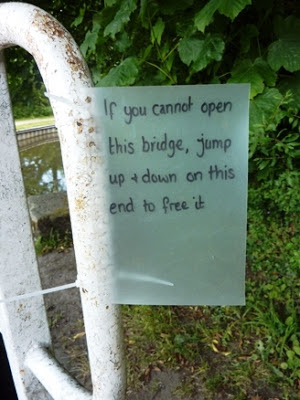 In the evening Rob and Dalvinder, some more 2CV mates who live round here, came for tea. Or, more precisely, Rob and Dalvinder came along and brought tea with them. Dal took over our kitchen and in no time at all turned out spicy pakoras to start with followed by a delicious lamb curry that lasted for two days after they’d gone home. It was a brilliant evening with lots of reminiscing about the 20 odd years we’ve all known each other.

A couple of days later we were off again, down Field and Dobson’s locks and through Apperley Bridge to moor up at Calverley Lodge swing bridge, just before Rodley. 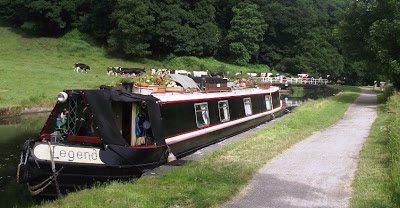 We took on water just above Dobson’s at what must be the slowest water point on the network. It was even slower than the one at the bottom of the Napton flight, but unlike there we couldn’t abandon it because there isn’t another one till we get to Office Lock in the middle of Leeds. While we were waiting it would have been a good idea to check the paddles on the staircase lock we were about to go down, that way we would have discovered that someone had left one of the top ones open. Instead we found out when the boat was in the lock and we were emptying the top step into the bottom step. To make matters worse we weren’t sure which paddle it was and instead of closing the open one, we opened the closed one. By the time we’d shut all the paddles and stopped running around, the bottom step was overflowing the gates and the top one was half full of water that we didn’t need, so we had to half empty the bottom step again, then drop the water from the top into the bottom, which overflowed it again, then move the boat, then empty it again. It sounds complicated. It isn’t really; staircases sound daunting when you try to describe them, but it’s just a logical sequence and all it needs is a bit of common sense. We can normally be quite slick at negotiating locks and moving bridges, so our pride took a bashing when we found ourselves wasting several thousand gallons of water unnecessarily. We were slightly annoyed at whoever left the lock like that but even more annoyed at ourselves for not checking it properly before we went in, however it was quite encouraging to see that the spill weirs were still running when we’d finished.

We cycled into Leeds from Calverley Lodge to have a look at the Waterfront Festival, and Leeds itself. We’d heard nice things about the city and we expected to be impressed. What we hadn’t expected was the wealth of fascinating architecture; the Market Hall, the Corn Exchange, the Arcades, all of which had us walking around looking up with our mouths open. 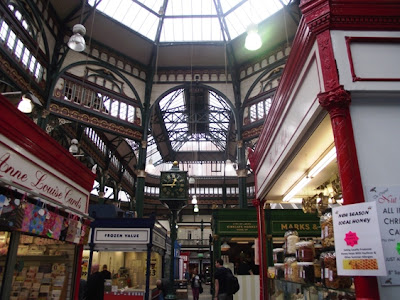 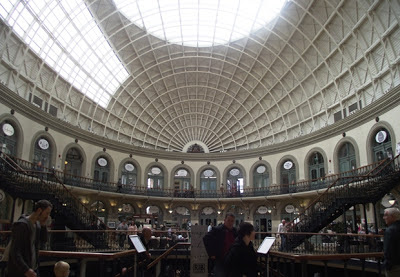 More and more, as we explore this country of ours, do we find that we’ve lived in it for all of our lives yet never really looked at it. We’ve been all over Europe, we’ve even been round the world, and yes, we’ve visited lots of diverse and beautiful countries bursting with stunning scenery and fabulous cities full of amazing buildings and we feel privileged to have been able to do all that…but.

England. There’s nowhere like it. All you need to do to appreciate it is to be a tourist.

The Waterfront Festival was spread over four sites; Granary Wharf, Brewery Wharf, Clarence Dock, and Thwaite Mills, so we locked the bikes up and walked between them. There was quite a lot of stuff going on; live music and street traders at Granary Wharf, more music and lots of food stalls at Brewery Wharf, dragon boat racing, boat trips and yet more music at Clarence Dock and our friend Kennet on display at the little riverside industrial museum at Thwaite Mills, along with a steam crane and a big Humber sailing barge. 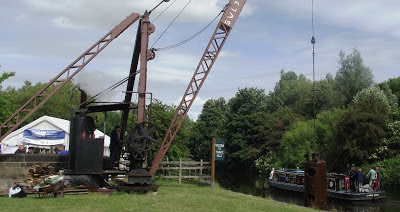 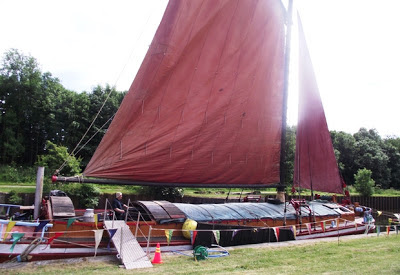 It was quite a hike to get there along the riverbank from the city centre, so rather than walking we took the Free Vintage Bus back then biked back to the boat. After cycling for 14 miles and walking around all day we felt we’d earned an ice cream.

This is Razor and his owner Anyta. 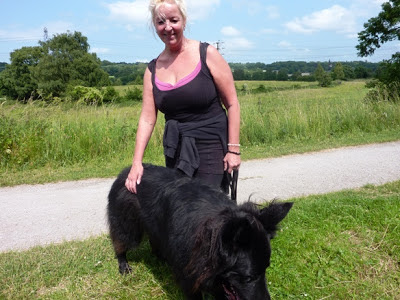 We know this because we have a thank-you card from them. We have a thank-you card because Razor fell in the canal and Dave, in true Hero Mode, pulled him out. As you can see he’s a big hairy dollop and the bank here is either Armco or concrete which made it virtually impossible for him to get himself out so it was lucky we were here. Anyway it all ended happily, and they stopped by later in the day with the card , a bottle of wine and a little narrow pot with a shooting bamboo in it. 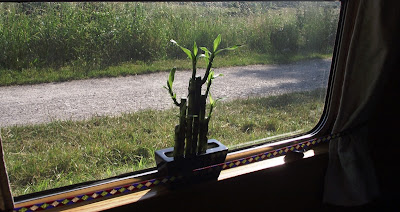 The perfect gift for a narrow window-sill!

Interesting things have been going on boat-wise; we did our annual oil and filter change, and Dave decided to see if he could do anything to cut down the Lister’s smoking habit. This involved a day spent emptying the engine room, a lot of fiddling about on his knees in the sump trying to get the fuel pumps synchronised, several hours experimenting with different idle-screw settings, and an evening scratching his head, wondering why the governor had started fluctuating when he hadn’t been anywhere near it. It’s all back together again now with another Weetabix gasket, time will tell whether anything positive has been achieved.

There is a new vent in the back above the battery box. 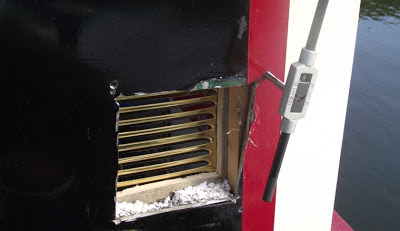 This is because now that we’ve put a cowling from the engine to the other vent it means that any fumes from the batteries need another way of escaping. In reality there is quite enough with all the gaps round the doors and the hatch, but we thought it would be a good idea to put a proper one in as we have our BSS examination coming up next year, the main concern of which is ventilation. 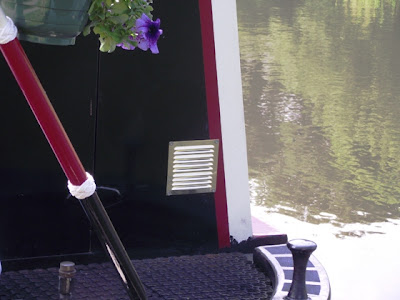 On and off for about a year we’ve been discussing how best to utilise the tiny space that is our kitchen; it always ends up unresolved because nothing so far has made us both say “Yes, that would work.” However we finally had an idea that we both like and we went off to Ikea and bought some drawers. Of course it’s a boat so they don’t fit, but after a couple of days spent fettlin’ them we now have four very useful drawers where there was once a thin annoying cupboard. We’re so impressed that we think we’ll do the same to one of our other cupboards as well. More fettlin’ of course, but that just adds to the sense of achievement!
at July 07, 2013