Unfortunately there aren’t as many photos in this post as we’d like, this is because Dave has taken to using the camera on his new smart phone rather than carrying his Fuji around. This is a perfectly sensible decision, and all the time we had the ability to load the photos onto a computer it was unquestionably the right thing to do. Unfortunately we have recently lost that ability. Not, as you may think, through a software related issue, or even a hardware interface incompatibility. No, this is the direct result of the Catherine wheel of over-confidence landing in the wood pile of the ill equipped, or, to put it more plainly, a muppet not thinking about the consequences of his actions until it’s too late. More on this later!

Mooring in Skipton was very pleasant with nice weather and lots of folk milling around. Having loads of people watching when you’re mooring up or nipping through one of the hundreds of swing bridges that litter the canal round here is really good, as with a bit of practice you can make it look very slick and impressively easy. The real test comes when you’re backing out of an arm or winding round in a town centre. Narrowboats can be horribly unpredictable going backwards and you know very well that in a town with a canal running through the middle, a lot of the onlookers will be boaters themselves. Happily when we left Skipton, with Liz and Jim on board and after a slap-up lunch in the famous Pie and Mash Shop, it all went according to plan. Legend behaved impeccably as she backed out from under Fred Truman’s outstretched bowling arm, turned and slipped demurely under Belmont Bridge on her way towards Kildwick.

We stopped for one night just before Farnhill Bridge; the closest we could get to the Aire Cooled Alley Cats 2CV club camp at Cononley. The following night we moved into Kildwick which was a lot nicer and a bit away from the main road. 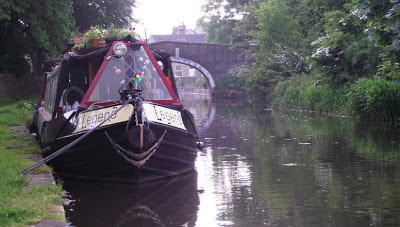 While we were there David & Kate came to stay on board so they could join us for the curry night at the camp. That was a fabulous evening and it was really lovely to meet up with a bunch of people we hadn’t seen for ages. 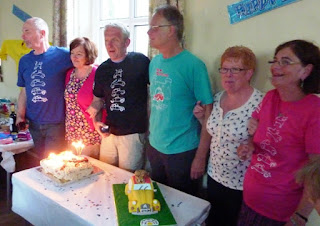 Hopefully, as they mostly live around here, we’ll see more of them as we meander down the Aire Valley.

From there we went to a very quiet off-side mooring right in the middle of Keighley golf course. 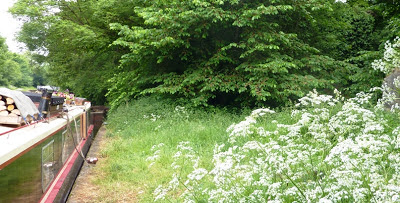 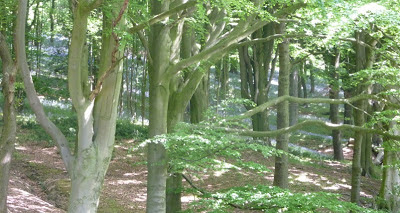 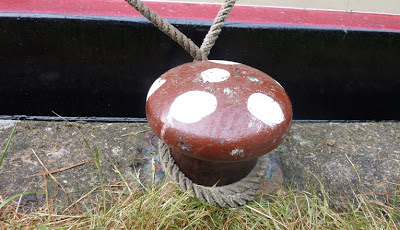 While we were there Dave decided to cut up all the fire-wood we’ve been collecting and stack it on the roof pallet under a tarpaulin. It looks tidier and it’ll be dry and seasoned when we come to lighting the fire again. He’d got it all logged and was on the outside gunnel taking the sheet off when the Catherine wheel of over-confidence bounced off his head. His sandal-clad foot slipped and because he was only holding the hand rail from underneath he couldn’t stop himself and in he went. Not too bad; it was warm, he didn’t hit anything or have lots of heavy clothes on and he got out quick enough. The only problem was that his new phone, the one with all the photos, was in his pocket. Oops.

After that we had a couple of nights on Riddlesden visitor moorings, but we weren’t on board much while Legend was there; we were mostly at David & Kate’s house, three miles away. Although they are our oldest and bestest friends and we’d have gone there anyway, and despite the attraction of yummy cake and a washing machine, our main reason for going this weekend was to service the Punto and help with a clutch change on their C1. As these jobs are obviously 100% blue, the girlies amused themselves with beading and going to the Skipton Day of Dance which was all very good. 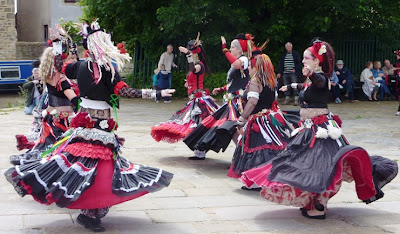 The reason for our slow advancement along the cut to that point was because we were pacing ourselves in order to be just in the right place at the right time to go down the Bingley five and three rises on a summer Sunday in the sunshine.

And we did, and it was brilliant. We had six extra people on board; Matt & Emma with Elizabeth and Amelia, their two little girls, and Lucy & Bethan, none of whom had ever been on a narrowboat before. There is a resident lock keeper at each staircase and a couple of CRT volunteers as well, but Ann-Marie still managed to do her fair share of windlass winding. Between them the Bingley locks drop the canal 90’ in about a quarter of a mile. We left the sanitary station at the top at half past eleven and we were moored up at the bottom under the Damart chimney at one. In a staircase the bottom gate of the top lock is also the top gate of the next one and so on. Each lock is twelve feet deep which means that when you’re going down, the gate that is right behind you is towering twenty-four feet above your head. 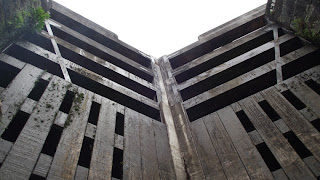 And, as our boat only just fits in L&L locks, in order to get the bottom gates open, you have to back it right up to the cill, which sometimes has a small waterfall running down it. Dave had the back doors shut so the engine room stayed dry but he still got a bit damp round the edges.

The locky advised us not to stop overnight in Bingley, so we carried on to Dowley Gap which is lovely and has a car park and a pub. 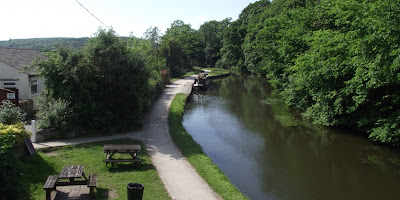 We’ll be here for the rest of the week, then we’ll go through Saltaire and Shipley and probably stop at Apperley Bridge for a day or so.

Thankfully we got free insurance with the phone bundle so it’s gone back and we’re currently awaiting news, but popular opinion is that water damage is likely to be terminal so the photos on the internal memory will be lost. As will 79 levels of Candy Crush. Damn!
at June 19, 2013