We’ve done some actual proper boating to get here. Six miles and eight locks in fact. 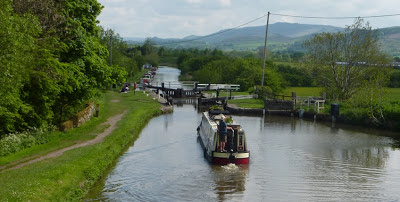 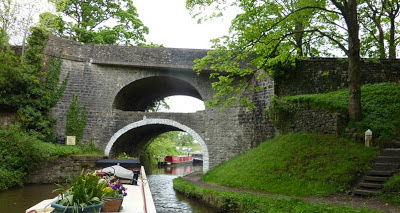 Now we know that doesn’t sound a whole lot to anyone who’s ever hired a boat or gone on a summer cruise, or anyone else for that matter, but for us it’s good going. Especially as all the miles were bendy and all the locks were big.
These are just one of the many different ground paddles that you find on the L&L. 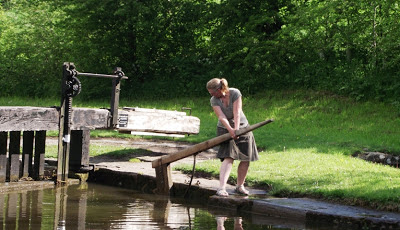 Ok, so we did it over two days, but they were consecutive days; we stopped for one night above Bank Newton locks because there’s a three day mooring restriction in Gargrave and we wanted to be there till Sunday. If there were any concerns about a shortage of water up here we didn't notice, in fact we had more of the stuff than we knew what to do with most of the time. 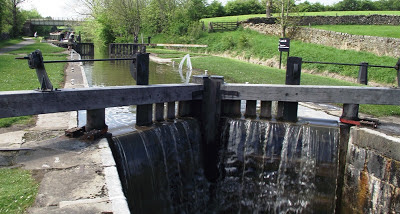 Before all this activity Legend was at South Field Bridge for a week although we weren’t on board. We were mostly driving around in the southern half of the country engaged in our second favorite hoby; visiting. First we went to Frankie & Harry’s in Hoddesden to help them pack all their remaining worldly belongings into a big white van and wave as it disappeared over the horizon towards France. They boarded a ferry and joined it about a week later to start their new life near Bordeaux. Good luck you two, we’ll miss you but we know you’re doing the right thing.

Then we went and got sunburned at the Trout Inn, near Lechlade-on-Thames, in the company of a gang of our old 2CV mates. We took our faithful dinghy with us and went for a paddle on the river past St Johns lock and up to Lechlade. Sometime in the future we’ll be back in Legend to do the same trip, although we doubt if we’ll be porting the boat round the lock on that occasion.

After that we had a lovely quiet couple of days at Chloe’s. We both had appointments nearby; Dave at the Dentist in Southam and Ann-Marie at the optician’s in Leamington Spa. It might seem to the casual observer that we just throw our lives together, wandering aimlessly hither and thither with not apparent plan. But look deeper, Dear Reader, and you’ll find that it is, in fact, a carefully orchestrated seamless coincidence of havoc. We usually leave the organisation to Karma; that seems to have more chance of working rather than trying to work it out using logic. Chloe came with us to Leamington Spa and we trudged about in the drizzle until it became obvious that we were only going to get wetter, whereupon she went home. It was lovely to see you Chloe. Chin up Chuck, Shandy will be back from Afghanistan next month.

Since we’ve been at Gargrave we’ve had a trek up to Malham, where we visited the village, the cove and the tarn, all of which are on the Pennine Way. Of course we’re getting to be old hands at the Pennine Way now, but nothing prepared us for this.

We managed to choose the day when a huge sponsored walk was going on. These guys are walking 100k in 30 hours and we got swept along with them for a very small portion of it. There was a staggering amount of technical clothing and more ski poles than you could shake a – well - stick at, but the ends justify the means. If we’re honest, we were quite humbled by their effort and determination, and all to raise money for people in a faraway country that they’ve never met and never will. If they’re willing to do that, then the least we can do is allow them the odd designer label and bit of carbon-fibre without sniggering.

Dave got the tiller swan-neck painted, something we’ve wanted to do for ages but never got round to, and the handle has now got some nice colourful Turk’s head knots on it, which disguises the fact that it’s a 3’ length of conduit. 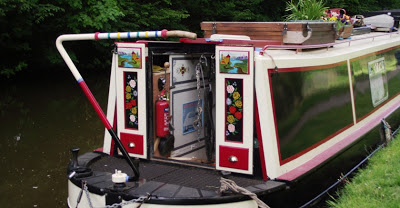 We’re in the middle of a gorgeous sunny spell at the moment so we’re making the most of it. The visitor moorings here are very sociable with people walking past all the time. Our table and chairs are out on the towpath and everyone is really friendly. A newspaper photographer came along and asked if he could take some photos of us and our boat in “Relaxing-in-the-Sun” mode, so Ann-Marie pretended to fall asleep while he snapped away. 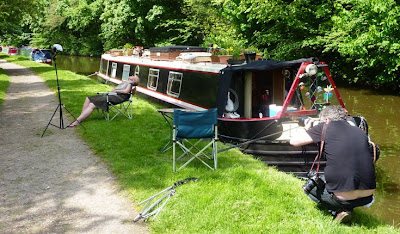 He hasn’t emailed us so we think our 15 minutes of fame may have ended up on the Guardian editorial waste paper bin. Ah well.

We’re off to Howarth tomorrow with David & Kate, then on Monday we’ll be boating again through three locks and three swing bridges towards, but not quite into, Skipton. That’ll mean we can be through Skipton and moored up at Farnhill Bridge next weekend which just happens to be about half a mile from Cononley where the Aire Cooled Alley Cats 2CV Club anniversary camp is taking place. You see? Karma at the controls again.

Here's some nice photos of Malham 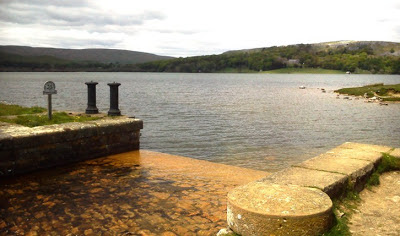 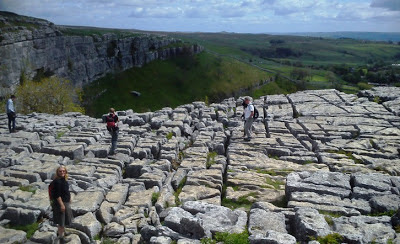 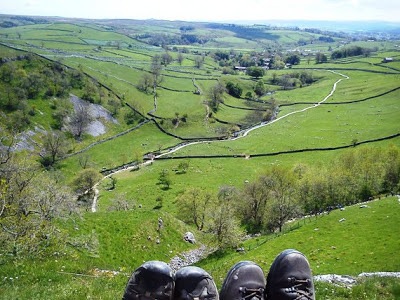