If, Dear Reader, you have been paying attention, you might have asked yourself the following question. “Why, if Dave and Ann-Marie are heading for the Rochdale Canal, did they return to Woodlesford?”
“Surely,” you may have continued, “In that direction lies the Leeds and Liverpool Canal, you know, the one I’ve been reading about all year.”

The answer is that we were planning to go away from the boat for a week and wanted to leave it somewhere safe. Last time we were at Woodlesford it felt very secure and it has the added advantage that our friends John and Gill live nearby. It was only a few miles out of our way through two very easy push-button locks, so we thought it made sense.

The reason for leaving Legend was that we were going to the 2CVGB National Meeting near Daventry. We also had to go away for a more sombre reason. Sadly, one of our neighbours from where we used to live passed away and we wanted to be at her funeral. Lynne and her husband Nev were the first people we got to be friends with when we moved in, she was a lovely lady and will be missed by many. We drove down the night before and stayed with Jon and Jenny who we used to live next door to. It was very strange waking up to a view that used to be our back garden but now isn’t.

The National Meeting was a very well organised, laid-back and relaxed affair with perfect camping weather. We caught up with people we hadn’t seen for ages and thoroughly enjoyed it. We obviously weren’t having enough excitement though, as on Saturday we jumped in our car and drove to somewhere unpronounceable in Wales to help Dave's cousin Rob and Tracy celebrate their wedding. 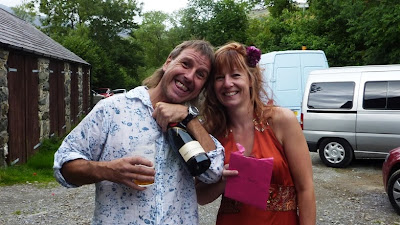 We’re still not sure exactly where we were, but it was in Snowdonia, the scenery was fabulous, and when we got there we had been following signs for Holyhead for half an hour. All the other guests were camping,we pointed out that we were camping too, only not there.
It was a really good do, well it couldn’t not be. Big happy family bash in a field with a barn to party in, and the best band in the World singing their hearts out in the evening; what’s not to like? Check out Sound of the Sirens Here.
We reluctantly left the party at about half ten, got back to a hushed campsite 3 hours later, crept into our tent and hugged each other till our sleeping bags warmed up.

As Ann-Marie and Karen were together and only 10 minutes from where they lived when they were 5 and 7 respectfully it seemed an ideal opportunity to do this. 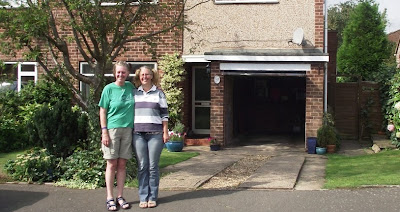 You'll note that they are both wearing their hair in the timeless styles from the period..

After the meeting finished we had a couple of days at Chloe and Shandy’s house helping with the auxiliary wiring and some furniture building in Dennis the VW camper. Oh, and getting to know Paddy their Golden Retriever / Poodle cross puppy. So he’s a Retroodle?  A Groodle? A Golden Roodle? A Pootriever? Well whatever he is, he’s unbelievably cute. 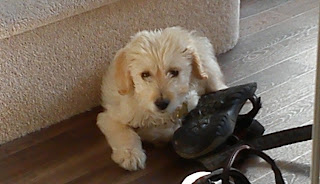 Back on the boat we got the maps out and made some plans. We realised we’d better get a move on if we want to actually get anywhere by Christmas so we’re now moving every other day or so till we’re back over the Pennines again.
Our first move was from Woodlesford to Stanley Ferry with John and Gill on Board. That was when Gill told us that while we’d been away the ‘Woodlesford in Bloom’ team who look after the flowers at the lock had been keeping an eye on our boat. Apparently they’re more respected than the mafia.

On the walk back from Stanley Ferry to collect the car we came across the biggest and tastiest blackberries we’ve ever seen. There was only one option. 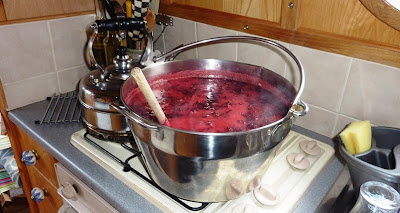 After Stanley Ferry we had one night in Wakefield before going to Broad Cut bottom lock. We met up with Chris and Jan on Squeeze Box at Fall Ings lock just before Wakefield, where the Aire and Calder Navigation becomes the Calder and Hebble Navigation.  It was really good to see them again; we’d left Selby without exchanging contact details so it was good to be able to put that right.

At Broad Cut we had a walk along the river bank and found a heavily laden cherry tree. The poor old jam pan had only just cooled down when it was put back into action. We’ve now run out of jars. Of course cherry jam doesn’t include the stones so we had a couple of hours getting cherry juice up to our elbows. We had 2 boxes like this. 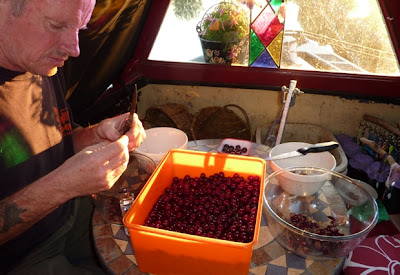 We’re now at Dewsbury, just before the double locks. Tomorrow the weather is still good, probably the last day of summer, so we’re going to Scarborough. After that we’re off towards Sowerby Bridge and the Rochdale Canal.

We usually make a point of not complaining about the state of things in this blog, but it has to be said that some of the Calder and Hebble locks are a trifle challenging. It’s not the length we find difficult, it was our choice to bring a 58’ boat up a waterway with 57’ locks. 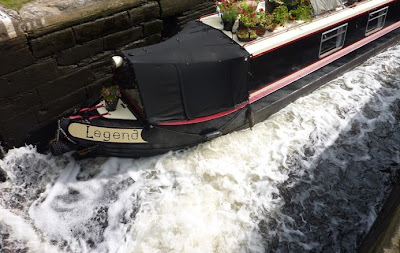 It’s just how much brute force you need to get through. For some of them you need a thing called a hand-spike. It’s a 3x2 piece of hardwood planed down at one end to make a handle and it fits in slots in big ratchets that open paddles. Hardwood costs money so we used a bit of sycamore from Jim’s garden. Here it is in use. 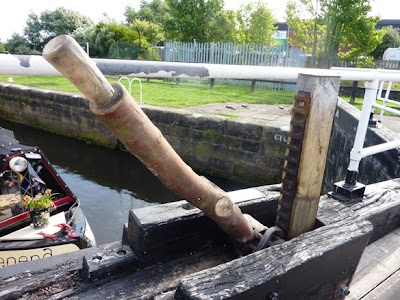 And here’s Ann-Marie proving that even with a 3 foot lever it’s not easy to open some of these paddles. 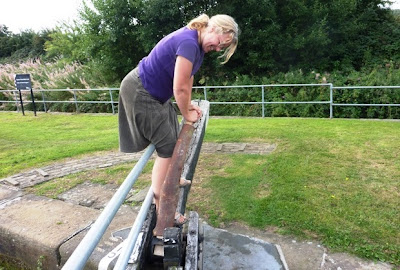 The hand-spike gate paddles are gradually being replaced with windlass operated hydraulic winding gear, which is good, but that still leaves the windlass operated ground paddles which take Herculean effort, and threaten a hernia every time you go near them. We’ve noticed that some of the other boaters up here use an extra-long windlass for added leverage. We’d always thought they were for wimps but now we know better and we’re magnet-fishing at all the locks in the hope of finding one.
at September 06, 2013

A combination of Golden Retriever and Poodle is called Groodle and yours look much more of Groodle puppies.