With Legend happily tied up on the river pontoon, we threw our overnight stuff in the car and went over to Bristol for a Live Cluedo game with Anne and some of her friends. Ann-Marie was driving for the first part and noticed that the brakes didn’t feel right. Dave brushed it off as being because she hadn’t driven for a while, until he took over in Bristol and nearly went into the back of the car in front. We carefully carried on to Anne’s where a quick look underneath revealed a patch of brake fluid on the floor coming from a leaking front to rear pipe. We put off thinking about it for a while and went for chilli in tiffin tins in the park with Anne and a couple of her neighbours.

In the morning, after getting a couple of £300 garage quotes, we decided that the best plan would be to order some pipe, pipe fittings and a flaring tool from Ebay and do it ourselves in Anne’s carpark. We arranged to borrow Anne’s car, which she wasn’t using for a few days, so we could go back to the boat while we were waiting for delivery.

With that sorted out, we got dressed up in wizzardy stuff and set of into the City, where we spent about three hours running around finding clues and solving riddles. 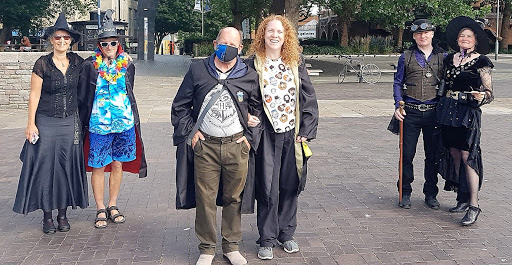 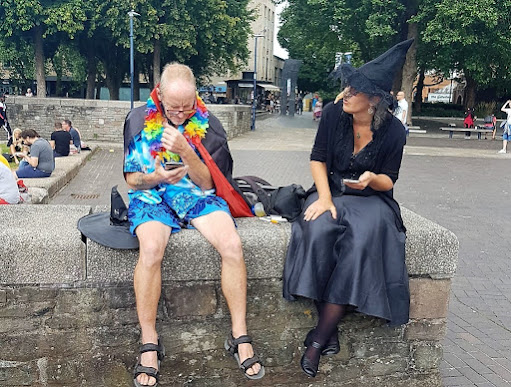 There were quite a few other teams doing it as well but not very many of them had dressed up, and because of having to be aware of social distancing rules, it wasn’t quite as exciting as the previous one that we did. However we had fun and although we didn’t get to chat much, it was good to finally meet Anne's friend Andy.

The next morning we were up the locks... 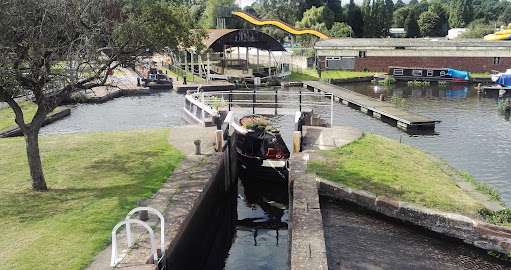 ...and moored up on one of the two highly sought after 24hr spots by the services. 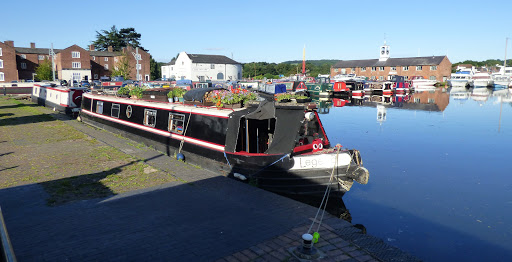 While Dave dived into the engine ’ole to gather up car mending tools, Ann-Marie got on with damson jam making. 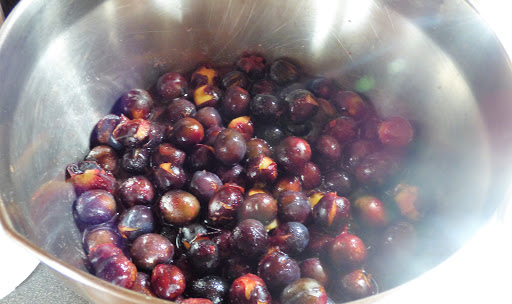 Although 2020 should rightfully go down in history as the year the world changed, it might be nice to also look back and remember just how bountiful the berries and stone fruit were that year. We’ve never had so many strawberries from our plants, seen so many blackberries in the hedgerows, or walked past so many plum trees bent over with the weight of fruit.

Before we left the basin the following day we humped Dave’s big tool box and axle stands into Anne’s car, along with plenty of brake fluid and a bottle jack. Anne had borrowed a pair of ramps for us, so Dave felt he was prepared for whatever he found. We went up the deep lock under York Street and past the old wharf and crane... 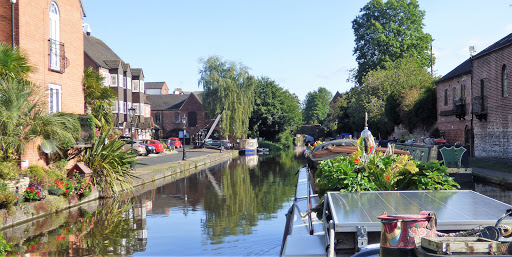 ...then carried on to the winding hole at Railway Basin where we turned and came back to the Bird in Hand pub. 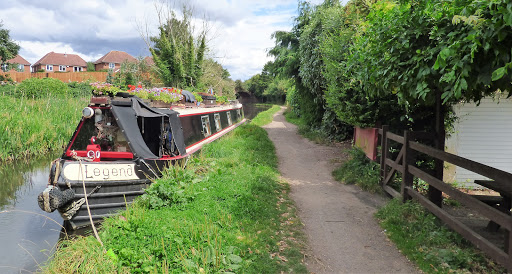 Martin and Yvonne had a brief visit the next morning as they passed through on Evolution... 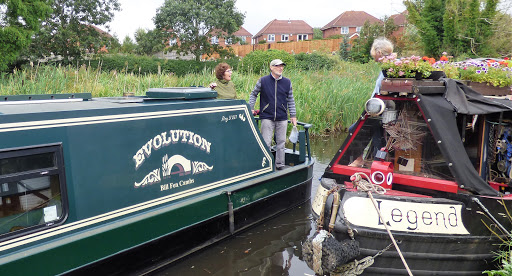 and in the afternoon we went for a walk with them over Hartlebury Common.

The Royal Mail parcel tracking service predicted that our new brake pipe kit would be arriving at Anne’s the following day, so that evening we set off back to Bristol. Anne was at work the next morning, so while Ann-Marie was stitching Frankie’s birthday card, Dave got dirty under the Kia. First he discovered that there were two brake pipes going front to rear, and although only one had sprung a leak, the other one wasn’t far behind, so he pulled them both out. 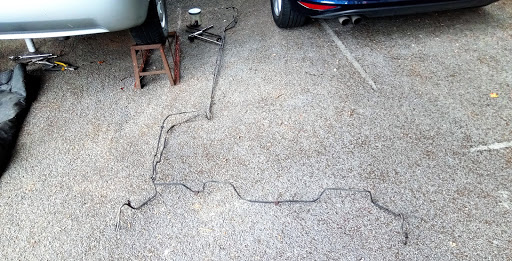 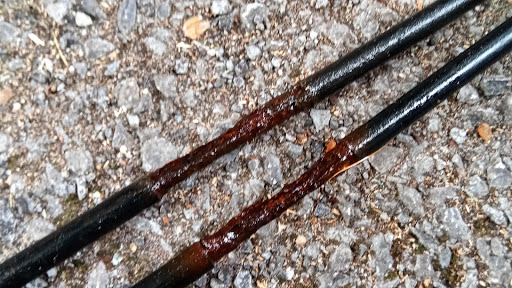 At about 2pm the new stuff turned up. Luckily there was enough new pipe to do both runs, plus a couple of feet left over so he could practice making flares. Using the old pipes as patterns for the new ones was the obvious way to go and Dave found that holding them together with cable ties as he went along made things easier. 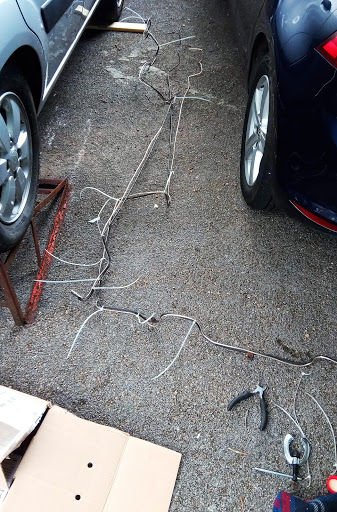 Once he’d got the fittings on and formed double flares on the ends... 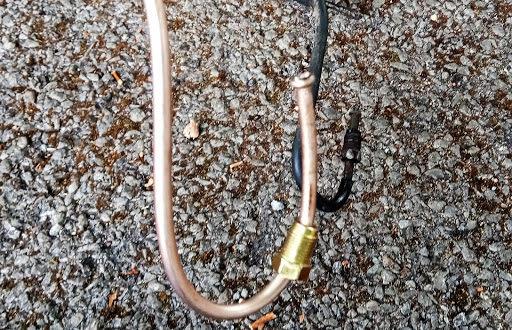 ...it was just a case of putting the new pipes back where the old ones used to be, connecting it all together and filling with new fluid. Ann-Marie helped with the bleeding bit and we were all done by tea time.

We had a very entertaining evening with Anne, doing gin, wine and a virtual pub quiz.

The day before our dry dock booking we noticed there was space on the 5 day wharf moorings so we pulled the pins from the Bird in Hand and nipped back into town. Next morning we were up bright and early and through York Street lock before 7am. Our booking into the dock was for 8 o’clock, so we were on time and waiting in the bottom chamber of the staircase. 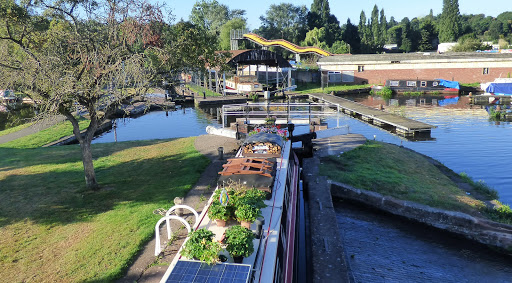 The people on the wide boat coming out were ready as well but it was another 20 minutes before anyone turned up, and another hour before the CRT staff managed to get the swing bridge open so that the wide boat could get back to the river locks and we could get into the dock. All in all it was lunch time before Legend had been pressure washed, had 4 new anodes welded on and we were ready to start work.

We didn’t waste any more time though. 24 hours later we’d been round the hull with a wire brush on the angle grinder, treated the nastiest spots with Rustins, and sanded down the tumblehomes. 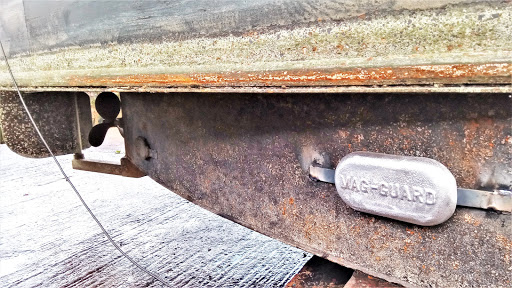 New anodes in a much better position 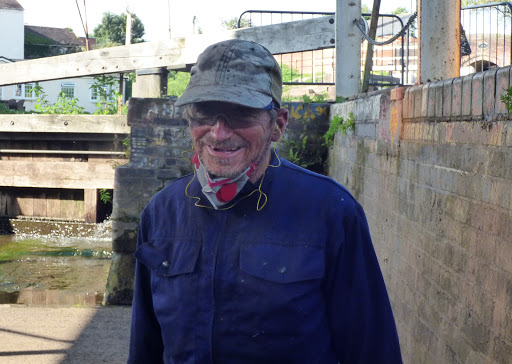 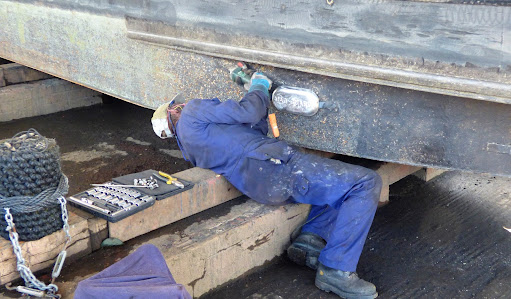 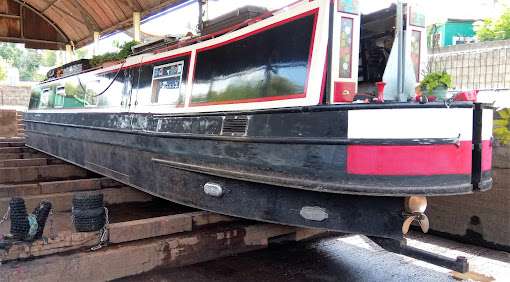 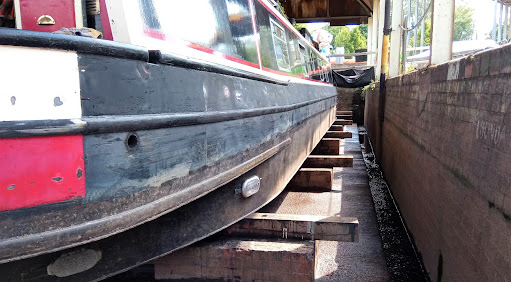 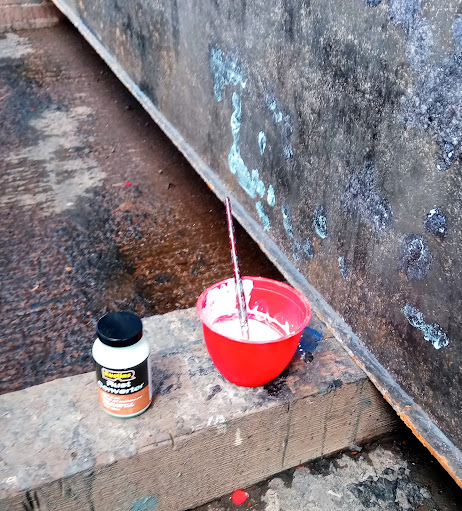 By Monday morning we’d got two coats of blacking on, put two coats of paint on the tumblehomes, and were waiting for our surveyor to arrive.

Because Legend is 30 years old our insurance company need a survey carried out before they will issue us with cover. A very nice chap called Paul and his assistant turned up at 9am and got straight on with it. We had a relaxing morning while they poked about, measured things, took photos and made notes, then in the afternoon we got a third coat of blacking on and a third coat of gloss on the shady tumblehome. (They got a third coat because the cheap gloss from Screwfix looked more like primer than gloss and we do like them shiny, and we only did one side at a time because when the sun was on the steel it was too hot to paint.)

By Wednesday evening we were finished, the rudder was back in, the fenders were back on and the paint was hardening nicely in the glorious sunshine before it got wet on Friday. 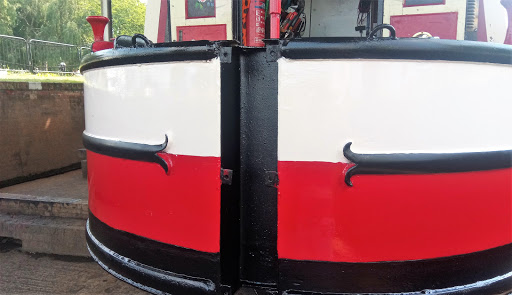 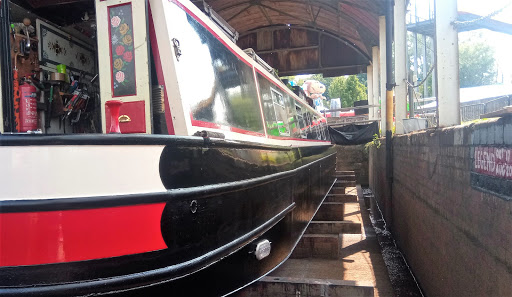 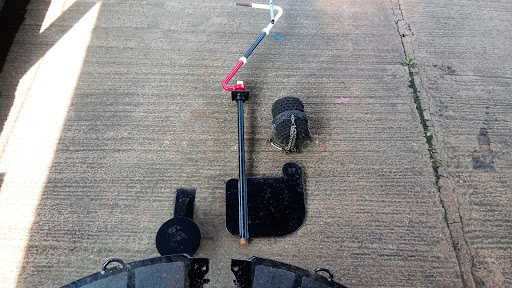 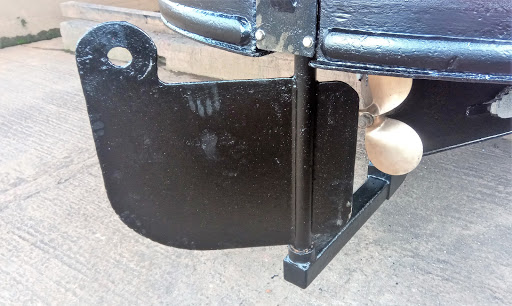 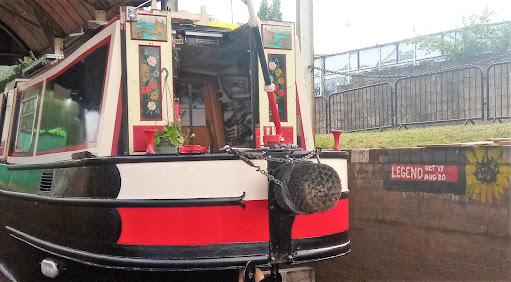 While Dave had been getting mucky outside, Ann-Marie had been getting the inside clean, going through cupboards and, while we had free electric, giving the whole boat a thorough hoover and a good spruce up. The sofa got a serious going over and came up really well. 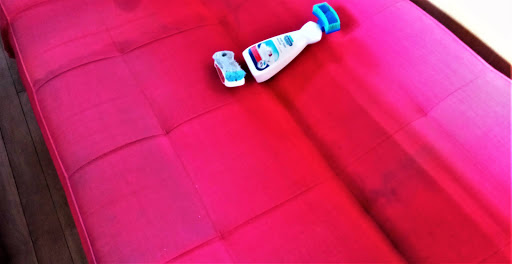 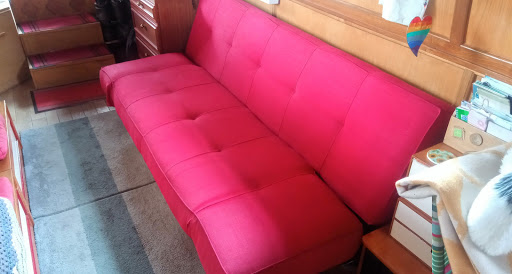 On Thursday we bought some new mats for the kitchen and the front steps, Dave cleared up the dock and we had a celebratory fish and chip dinner while a thunderstorm belted down outside.

By 8am on Friday after the hottest week of the year in a tin shed, we were ready and eager to get gone. Ropes on, water tank full, batteries charged and a couple of flasks of freshly boiled water.

Dave-from-the-boat-yard let the water back in and within minutes we were floating again... 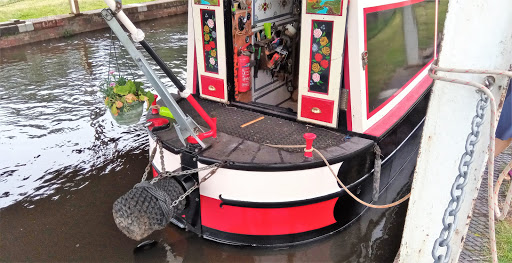 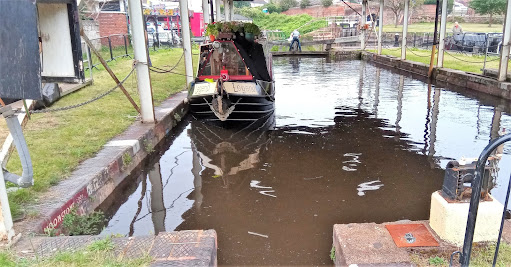 ...and backing out into the little pound between the locks. Dave-from-the-boat-yard was coming down the top staircase with the work boat, a hire boat was coming up the bottom staircase and the next boat in the dock was waiting on the pontoon. In the middle of all this Dave did a very neat job of turning Legend completely round and slipping into the top staircase without our new paint touching anything.

We chugged our way across the basins and once again had the good fortune to find a spot on the 24hr moorings where we tied up for brunch.

Because of health and safety regulations we’d not been allowed on the roof or along the gunwales while we were in the dock so despite the inside and the hull being spick and span, after a week in a dusty shed Legend’s roof and sides were filthy. We spent a couple of hours taking all the plants and tat off, washing the cabin and evicting hundreds of earwigs. The weather was still blisteringly hot so we chilled out in our lovely clean and shiny boat and, because we are permanently on holiday, watched the world go by.

Actually we didn’t. Ann-Marie did the laundry while Dave (for reasons that will be revealed soon enough) took the engine room apart.
at August 17, 2020