The first thing you encounter after turning onto the Droitwich canal... 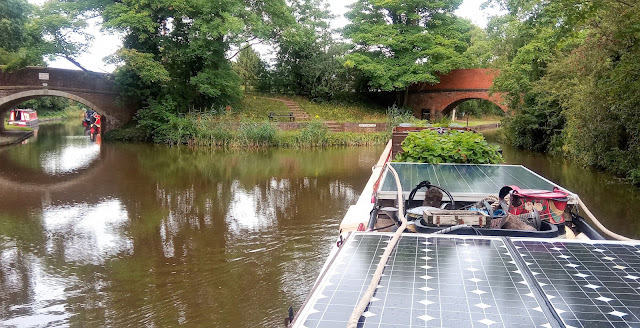 ... ...are three locks with working side ponds. Once a common feature around the network, usable side ponds are rarely encountered these days, although their silted up remains are often seen, sometimes as lock cottage gardens, sometimes as a mini nature reserve, but mostly as an overgrown reed filled muddy hole.

So, what is a side pond and how does it work? Put simply, it’s a reservoir that catches around half the water when a lock is emptied for use when it is refilled again. It consists of rectangular brick lined hole built alongside a lock chamber with a sluice gate between the two structures. The side pond is about half the depth and about twice the width of it’s adjoining lock.

To use it, whether filling or emptying, the sluice between the lock and the pond is opened first. If you’re emptying, the water goes from the lock into the side pond and if you’re filling it goes the other way. Once the levels have equalised the connecting sluice is shut and the lock is then filled or emptied as normal. On a flight, the overflow weirs run through the side ponds so they are constantly topped up and ready for use. Even on a working example like Hanbury, the ponds are quite badly silted up so less water is captured each time, but the saving is still quite significant. If all the vanished side ponds on the system were still in use, water shortages would no doubt be a lot less frequent.

Here's a video showing the side ponds at Atherstone in use.

Another nice  feature that is still in use on the Hanbury locks are the boatman's steps. As long as it's not too windy, you can stop the boat in the wing walls...

and hop up the steps to shut the gates. 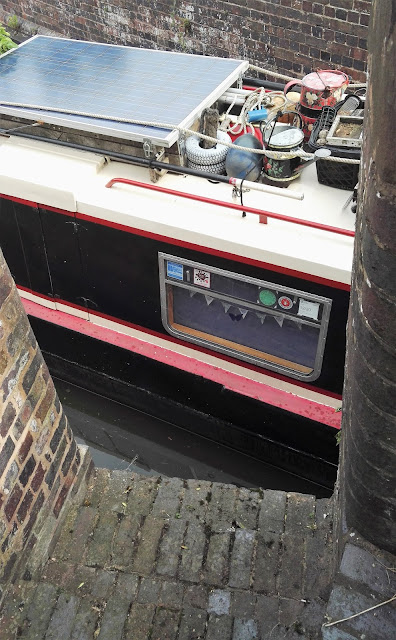 The first three locks drop down to the Marina. Until relatively recently that was the limit of navigation. Since July 2011, through the hard work of the restoration society with help from British Waterways and WRG, navigation has been possible on a new section of the Droitwich Junction Canal which now takes you through a road bridge, a staircase lock... 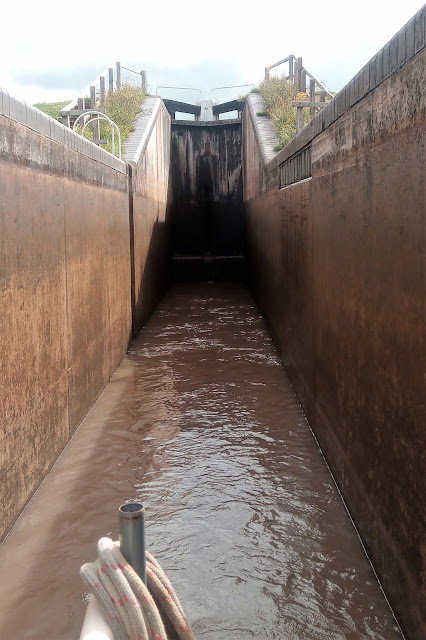 ...plus a single, and the notorious M5 tunnel, before joining the Droitwich Barge canal in Vines park.

We’d looked at the air draught marker at the tunnel entrance the day before and it read 2.1m. 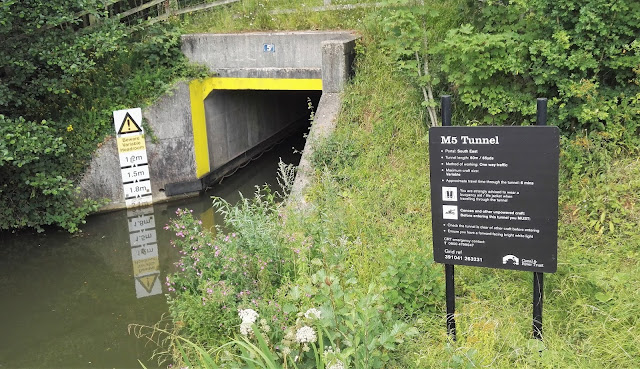 We’d carefully measured our boat and taken everything down above that height and we were sure we’d get through with a couple of inches to spare, so it was a bit disconcerting when we scraped the warning sign.

We crept forward very slowly, Dave's hand ready on the Morse control to stop our progress if necessary. Sighting up the tunnel roof with the boat roof revealed a thin line of light so unless the laws of physics changed while we were under there, we knew we’d get through. 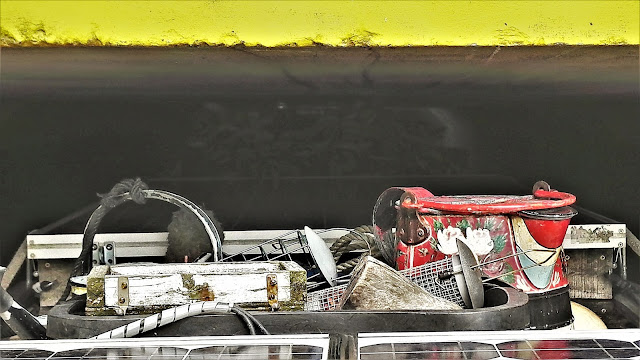 And we did. It was very tight but it proved that the height marker on the wall and our measuring were both pretty accurate, and that the warning sign hanging in front of the entrance was somewhat pessimistic.

As promised by the met office, it was a lovely sunny Sunday morning as we worked Legend through the three rather stiff swing bridges in Vine's Park, so there was no shortage of help from willing bystanders, if fact in order to maintain social distancing, Ann-Marie almost had to beat them off with a stick.

We moored up alongside the park just outside the little marina. The marina is for visiting boats and we were in there last time we came here. It’s very safe behind a locked gate, but the pontoons only come halfway along our boat and we wanted to trim all the flowers and plants before putting our roof back together. Besides, the marina is only 48 hours and judging by the windy weather forecast, we were going to be there for three days.

The week we were in and around Droitwich should have been the week we were on the WRG Derby and Sandiacre Canal camp. Obviously Covid 19 had brought about the cancelation of all the WRG camps, so instead we celebrated the restoration of the Droitwich Canal in the only appropriate way. With cake. 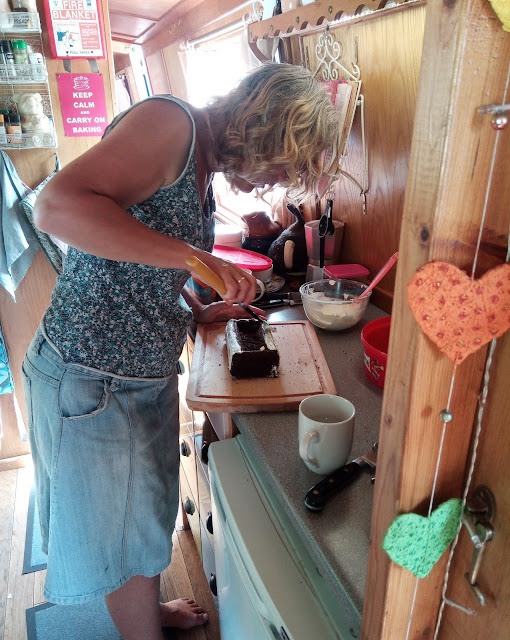 This year WRG is 50 and the group has set itself a challenge to make 50 birthday cakes through the year. Lock-down has made things more complicated, but we have carried on regardless. This brick was Ann-Marie's second cake, here beautifully displayed outside the restored Droitwich Basin. 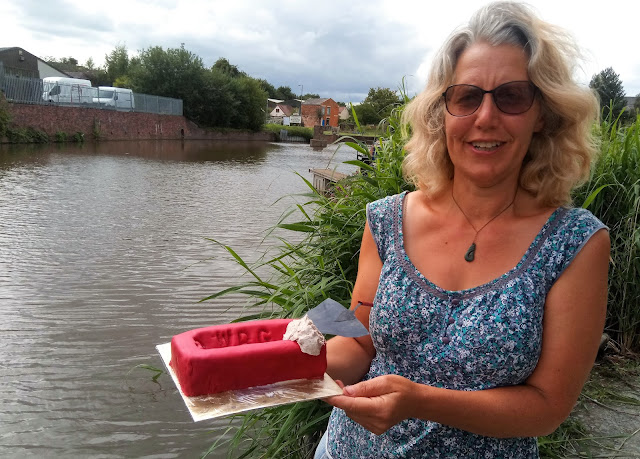 Because we hadn’t done much walking for a couple of days we went out for a massive 14 mile expedition to Doverdale, returning through woods, fields, hills and valleys to lock 3 and then back to the boat along the towpath. 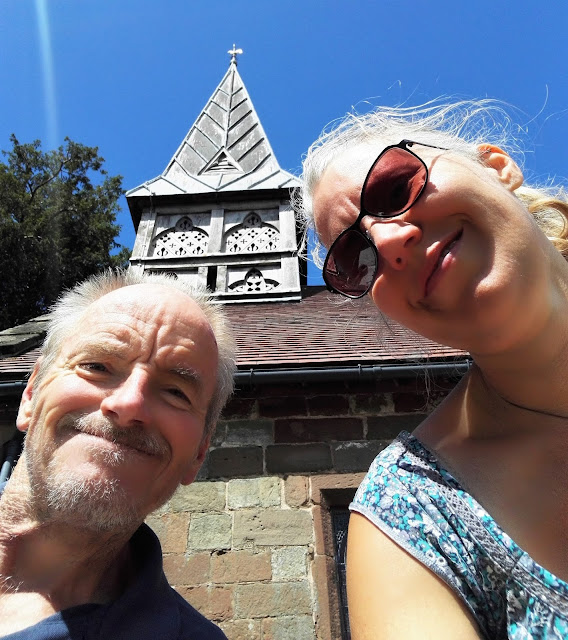 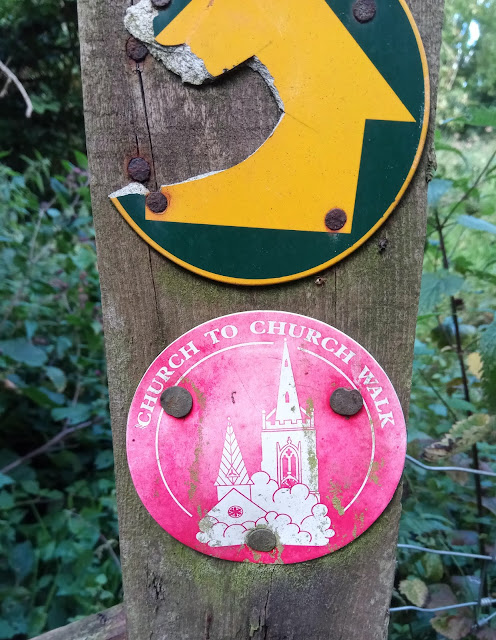 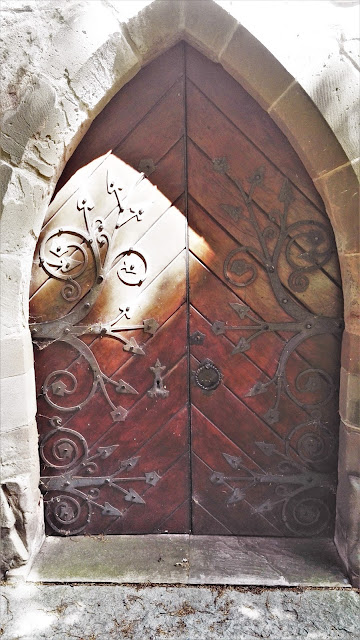 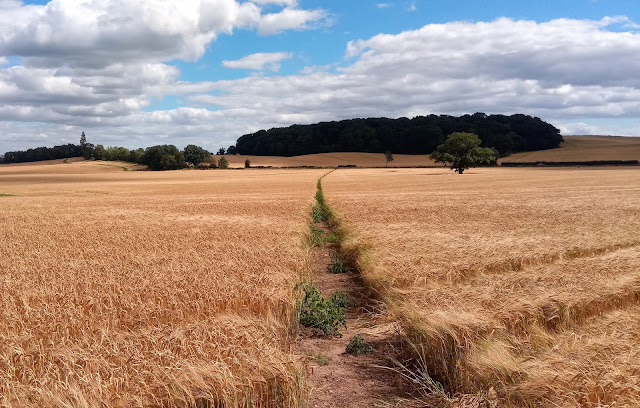 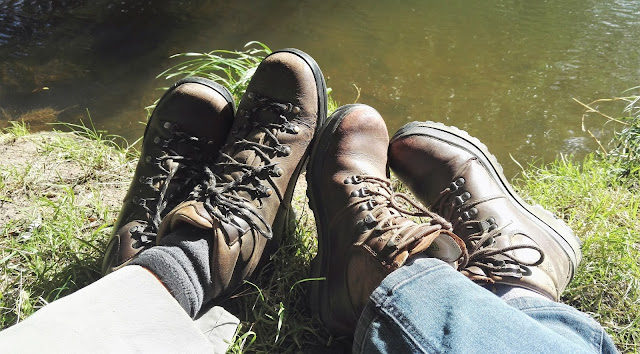 We stealthily slipped out of Droitwich first thing the next morning, (well, as stealthily as one can with a Lister) 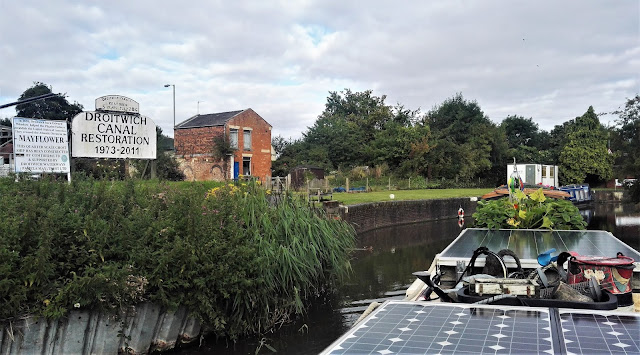 and with our breakfast on the back deck... 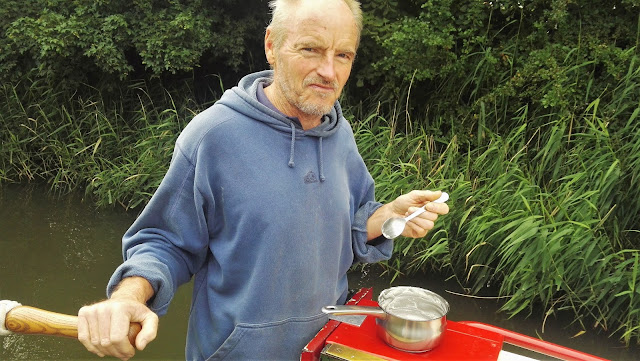 headed off toward the river Severn. Here's a little taster of what most of the Droitwich is like, and why there are so few mooring spots.
After steadily plodding our way through a fishing match and six heavy and uncooperative double locks, we got to the Armco above lock 2 at Hawford mill just in time for elevenses. We spent the rest of the day getting the boat river ready followed by a walk along the river. A much shorter and more gentle walk than the day before. There were some major works going on at the weir barring our progress along the riverbank, so instead we went down stream along the Northwick Heritage Trail past the brick meadows. There was still a lot debris in the hedges and fences bearing evidence of last winter’s floods; it looked like the Severn had a rougher time of it than the Thames.

Dropping down the final two locks onto the Severn the following morning confirmed how bad the flooding had been. The bottom lock was covered in a layer of silt, not just the lock landing but the gates and balance beams and half way up the wall behind it. 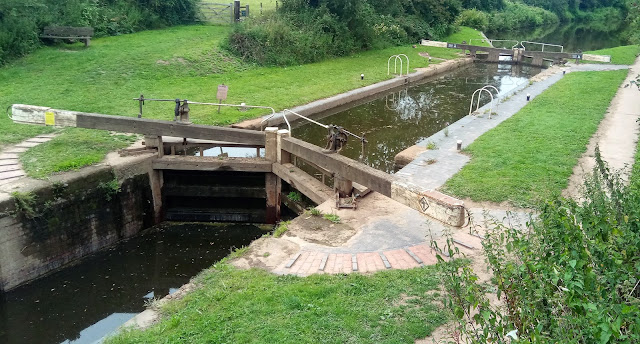 While we were working the bottom lock a journalist from Waterways World magazine turned up. He was doing a piece on restoration and asked if he could take a few photos. Fame, we love it!

The feeling we got pulling away from the last lock on the Droitwich and making the about turn to go upstream on the Severn was truly amazing. Getting back on a big wide river with clear water under us after such a long time squeezing through gaps and churning up mud put big smiles on our faces.

Boating up the Severn to Stourport was perfect. Sunny and calm, other boats to wave at...

lots of interesting things going on with all the new fish passes at the weirs. 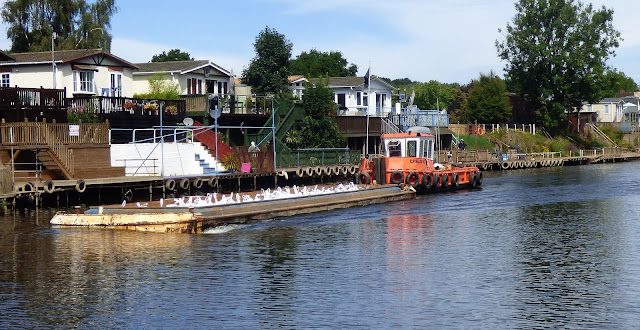 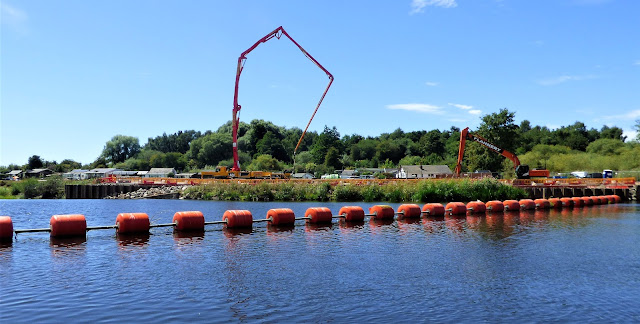 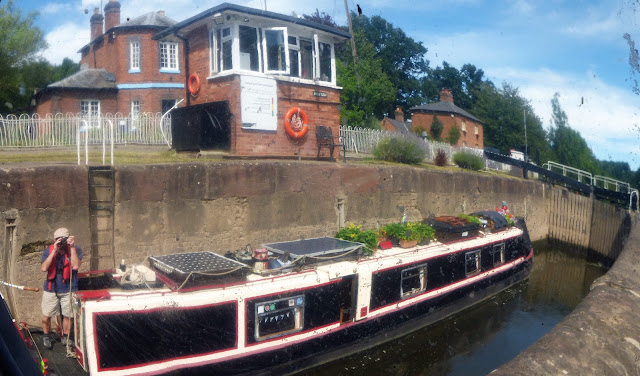 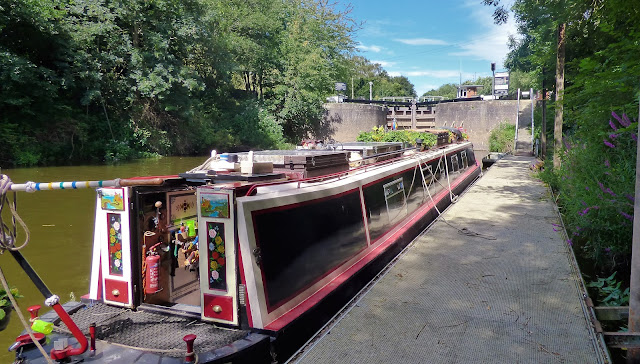 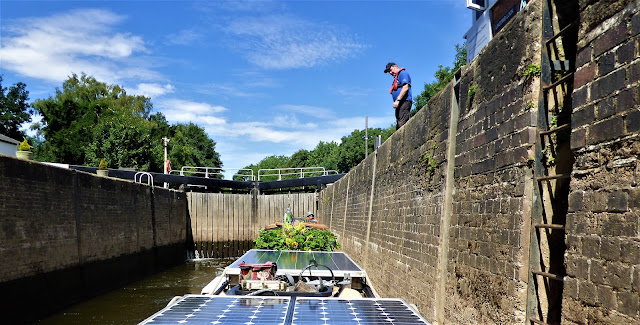 ...and even a mooring on the visitor pontoons when we got there. 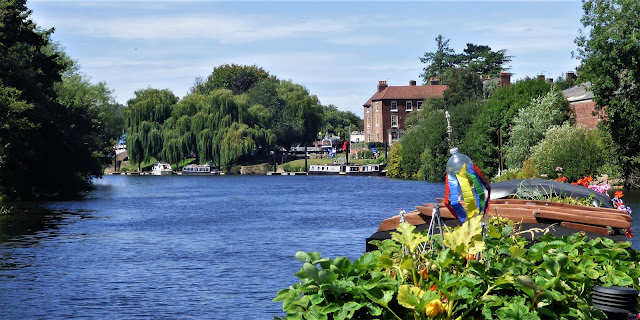 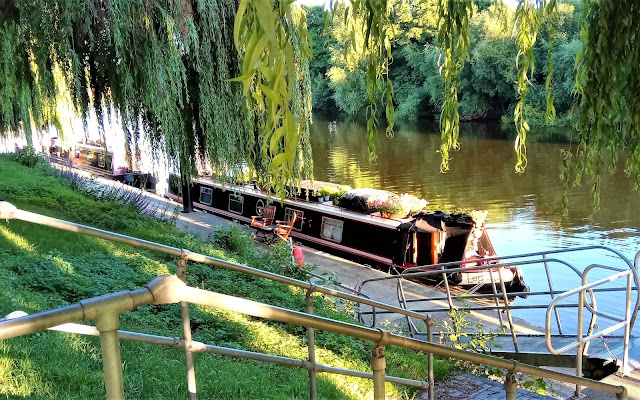 The day turned into real scorcher, so we put the chairs in the shade of the weeping willows and spent the afternoon watching the local kids jumping in the river. 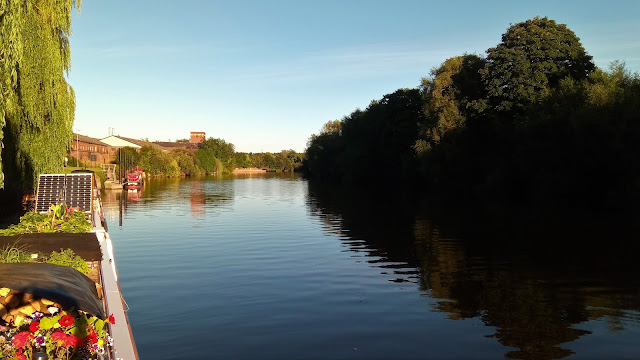 So that was it. Mission accomplished. Wallingford to Stourport in nine weeks. We’re a week early for the dry dock so it’ll give us a bit of time to sort ourselves out before we go in. The pontoons are 48hrs and there is a chronic lack of visitor mooring in Stourport, so over the next week we’ll go a short way up the Staffs & Worcester and find somewhere to kick our heels till next Friday.

As well as blacking the hull, our week in the dry dock is so that a chap can come and carry out an insurance survey on our 30 year-old boat. We’re not terribly anxious - we had a survey 5 years ago - but there is always the slight worry that he’s going to find something unexpected.

We’ll tell you how it went next time.