After we said an emotional farewell to Frankie & Harry and waved them off on their way back to Bordeaux, we refilled the water tank and boated down to Carr Bridge at Furness Vale. Although there weren’t very many boats there when we came up, we found ourselves having to squeeze into a line of about 14, which means for the next two weeks we’ve got neighbours, whether we like them or not. 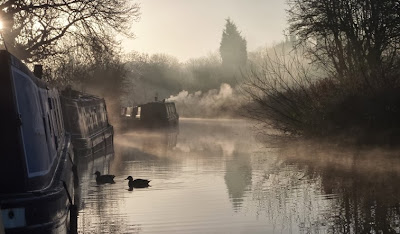 We picked the day with the best weather forecast to move, which turned out to be a wise choice; we had a lovely time boating in the sunshine with hardly a breeze. The following day all hell broke loose. While the boat was being rocked from side to side and lashed with rain, Dave had a proper go at the sofa. He re-attached all the springs with much sturdier fixings and shortened the bit that sticks out at the back so that it goes right back to the wall and gives us another 2 ½ inches of floor space. That doesn’t sound a lot but on a narrowboat every inch is precious and it’s made all the difference in the world.

As a way of saying goodbye to all our northern 2CV friends before we head off south down the Macc, we drove over to Bradford for the Aire-Cooled Alley Cats Last Ever Curry Night. Another warm friendly welcome from friends that we’ve known for years and a fantastic curry to boot. They even presented Dave with a birthday cake!

After having our kids take the mickey out of our stool cushions we decided to fashion something a little less primitive than a lump of foam that we hacked off the camper van mattress with a home-made fleece tuffet on top.The comments about them looking like very bad false beards were wearing thin, so, using some material that was left over from making the curtains for our Citroen H van, (how many years have we been carrying that around?) we now have these delightful additions to our furnishings.

A vast improvement.with velcro tabs holding them on so we can still use the stools as occasional tables. Now we just need to replace the cross bars and saw a couple of inches off the legs and we're done.

This autumn, ever since there has been more night than light in 24 hours, we have been having to charge our batteries every day; a sure sign that they are on their way out and an inconvenience that means that we can’t leave the boat for any length of time without the fridge switching itself off. Last year the solar panels could cope with just the fridge for as long as necessary. Because of the rigours boat batteries are put through a life expectancy of 2 – 3 years is about the norm, after that they become increasingly unable to hold a charge. For a vast amount of money you can get super deep-cycle traction batteries that last far longer, but for mere mortals like us a new bank of 110s every now and then is the status quo. We had hoped that looking after them and keeping the periods of discharge to a minimum would extend their life expectancy but that doesn’t seem to be the case. While we were on a visit to Chloe & Shandy’s in Daventry we popped into Midland Chandlers and got a new set. Last time we had 4; this time we’re going to see if 3 will be OK. The hope is that 3 will actually do better; it takes less time to charge fewer batteries properly and we don’t, as a rule, have any power hungry devices, so there should be ample capacity.

While we were down there we got to see Paddy again. Paddy is Chloe & Shandy’s 6 month-old poodle/retriever and Paddy is now big. Not as big as his paws say he’s going to be, but big all the same. And very, very gorgeous. He is coming to stay with us for a week before Christmas while they go to France and we are very excited about this. We’re really looking forward to taking him for long walks around the beautiful bits of Cheshire and Derbyshire that we’re living in at the moment; we’re just not sure how he’s going to fit in the boat.
at December 18, 2013