We didn’t see Legend in daylight for our first two days at Strines as we were annoying the residents of Bollington and Poynton from dawn till dusk with traffic surveys. The day after that finished we jumped in the car for the long drive to Surrey for a terrific evening with Karen, Andrew and Ben. There was a delicious pie followed by a hilarious game of trivial pursuit, then the next morning we hopped over to Mum and Dads in Fleet for Dad’s 75th birthday celebrations. 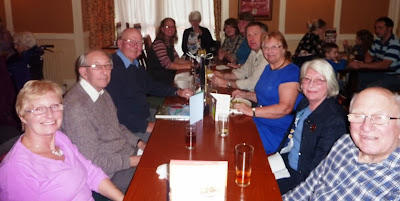 We had a lovely meal out followed by tea and cake then we were off again; 200 miles north and back aboard a chilly boat just in time to light the fire and fill the hot water bottles.

Ever since we had our last MOT we’ve been casually looking for another car. We’ve been very lucky with the Punto, but we knew if we kept it any longer it was going to start getting expensive. So, after we got back from Fleet we stepped up the pace, did a bit of research and found out that if we got a small diesel that could do 60mpg it would save us money in the long run. It also had to fulfil the criteria that the Punto excelled at, ie be invisible. After trawling through Autotrader and visiting some local dealers we found a tidy, low mileage silver Astra; you don’t get much more un-noticeable than that. We’d like to thank David & Kate, Wiltz & Annie and Jono & Nicole for their help, advice, food and accommodation while we made our minds up, and especially Wiltz who drove us around after the Punto went to the scrappy. What would we do without our friends?

Bright and early on Friday morning we went up the cut a bit to Disley to another lovely mooring with more beautiful views out over the Goyt Valley,

then went for a walk to New Mills along the Goyt Way which included the amazing Millenium Walkway. 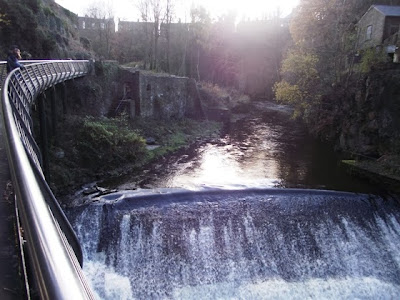 In the afternoon we drove over to Chesterfield; for our joint birthdays and Christmas presents Anne had bought us tickets to see Bellowhead at the Winding Wheel. They were a bit unusual to start with, but as the evening went on we found ourselves bouncing around along with everyone else. Our Christmas festivities have well and truly started.

After two days at Disley, we found ourselves with this vie out of the swide hatch. 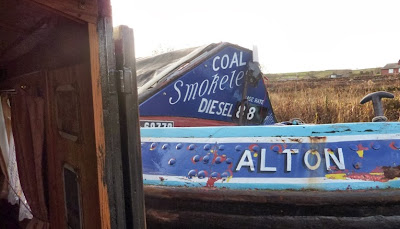 Brian & Ann Marie came along on Alton on their fortnightly run, so we had some more coal off them. It’s very nice knowing there’s going to be supplies coming every couple of weeks till we leave the Macclesfield Canal next year. We’ll be regular customers until then and we’ll fill up with diesel just before we leave their patch.

There are some lovely walks around the Goyt Valley; we’ve been over Whaley Moor, up Cracken Edge and across the New Allotments, which was very steep and a bit scary 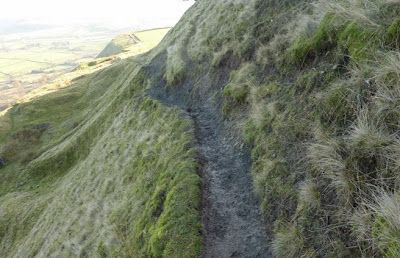 but rewarded us with some fantastic views over Kinder. 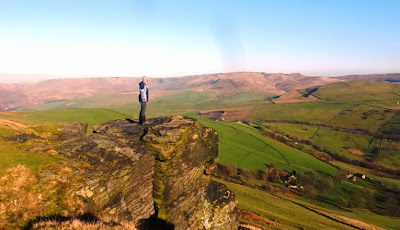 We’ve had several strolls through the Goytside Meadows country park, which ends up very dramatically in the Millennium Walkway under New Mills, and leaves you with a choice of three ways into the town, all of which include a huffing and puffing climb. We like New Mills. There are a couple of cafes that have taken our fancy and we find ourselves on walks that pass through there quite regularly. There’s also Swizzles, the sweet factory. It backs onto the towpath so when you walk past the extractor fans you can taste Parma Violets and sherbet. It’s quite addictive.

By the time Dave’s birthday came around we were on Whaley Bridge visitor moorings and, to our surprise, the only boat there. We’d thought it would be more popular as there’s a sanitary station, parking and very easy access. While we were using the sanitary station Dave managed to leave our keys in the door. We’d done all our necessities and pulled round the corner by the time he realised, but when he went back they’d gone. As well as the BW key, the bunch held the keys to all the boat padlocks and despite putting a notice on the door and asking around, we’ve heard nothing. We reckon someone had them for the float key-ring and the BW key, the rest are probably at the bottom of the cut. We had a bit of a panic on about the diesel filler lock, which would have been a nightmare to get into (It was designed to be!) but luckily we managed to find the duplicates so all is not lost.

Our visit coincided with Whaley Bridge’s Christmas tree lighting evening. Santa was transported into the basin by a flotilla of six illuminated narrowboats from Furnace Vale. 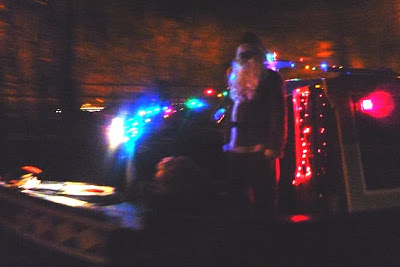 That was followed by a procession of very excited children up to the grotto, some Morris dancing in the town and some communal carol singing to the accompaniment of Whaley Bridge Brass Band. The bakery was handing out free mulled wine with every bun and we returned to our boat with a warm fuzzy glow.

We took our new car for a serious test run by driving across country to Wisbech for Holly’s 18th birthday party. It was fabulous seeing all our old friends from Pig Dyke and Slapdash and we had a brilliant evening. Despite lots of generous offers to put us up we came home again that night, arriving back at the boat at about 2am. The car was fine, and due to a generous dosage of coal before we left, the boat was still warm.

Frankie and Harry came along to Whaley Bridge for four nights; they were on a UK visit and included Dave’s birthday in their schedule. What lovely people! 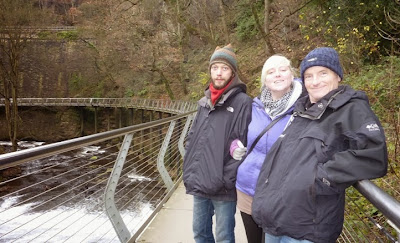 Chloe and Shandy came along as well for the first night and we had a delicious lasagne and an even more delicious Black Forest Birthday cake.

Chloe and Shandy were the first to arrive; just after they’d phoned to say they were about half an hour away Dave sat down on the sofa and one of the springs twoinged out of the bottom. We’d have put up with it but for the fact that for the next four days it was going to be our bed. There was half an hour of frantic sofa wrestling which didn’t quite get finished in time, so that when C&S turned up they had to climb over both Dave and the upside-down sofa to get in.

The following day was his birthday proper; so he got up first and cooked us all a Full English. Don’t go feeling sorry for him, he wouldn’t have it any other way. In the evening Wiltz and Annie came over with their son John and together with Dave’s sister Anne and Frankie & Harry we invaded the local Indian Restaurant. Fab Birthday.

The next night we were joined by another of Dave’s sisters; Judith, and Vince, her partner. They came to see us when we were on the Stratford Canal for Judith’s birthday, and it was lovely to have them over again. We had a proper chippy tea followed by Ann-Marie’s amazing Banoffee Muffins. Birthdays were never like this when we were kids.
at December 18, 2013