Well that was fun! Legend is now just above the top lock of the Wigan 23 and has the accolade of being the first boat in 2013 to go up. 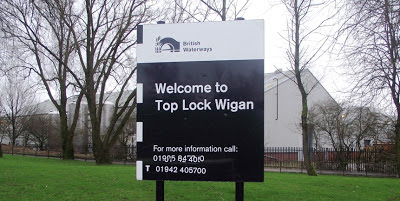 We would like to thank David & Kate who came to stay aboard for the weekend and without whose help we wouldn’t have even attempted it. The statement in the last entry that read “…. the ice shouldn’t cause us any problems.” turned out to be slightly less than the truth as you will see….. 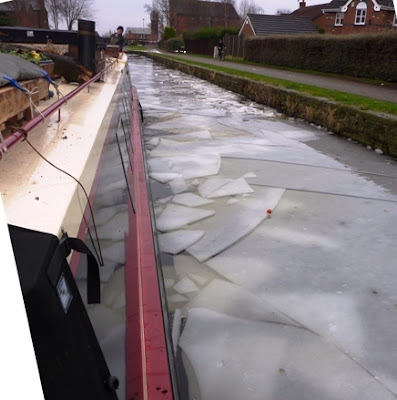 David & Kate arrived around lunch time on Saturday and we’d already decided against moving that day as there was so much snow on the ground locking would have been down-right dangerous, but by Sunday most of it had cleared so off we went. The bottom nine weren’t too bad; lots of ice breaking but nothing we couldn’t plough through.

Our plan was to do it over two days so we stopped for the night in the long pound just before the locks get really close together. Not the ideal overnight mooring; the local kids and dog owners did little to impress us, so despite waking up on Monday to find that it had once more dropped below zero overnight and the ice was all a lot thicker, we decided to try and do the rest of the flight anyway. A quick walk up the cut revealed that the pound we were in was the worst, and if we could get out and into the next lock we should be able to carry on. With lots of to-ing, fro-ing, rocking and bashing, and with the Lister on Full Chat we managed to achieve some – sporadic – forward motion 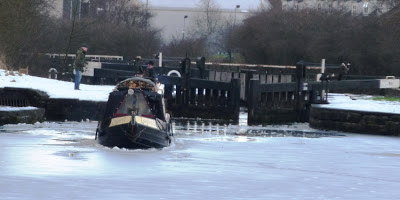 and got out of the pound in about twenty minutes. After that it was a steady slog; there were several locks where we had to break the ice behind the gates to get them open, two or three paddles that weren’t working and one lock where the bottom gates were leaking so badly that it wouldn’t fill completely, and we had to ram the top gates to get out. Despite all that, by two o’clock we were moored up outside the Kirkless Hall pub where Dave & Kate’s car was parked, two locks down from the top. Mission accomplished.

We did the final two a couple of days later on our own and we’re now moored just round the corner for a week or two. Dave made a start on re-lining the engine room, and then the following weekend went off to Chesterfield on his own to help Anne take down an eye-sore of a cherry tree. 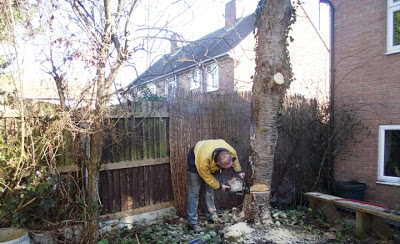 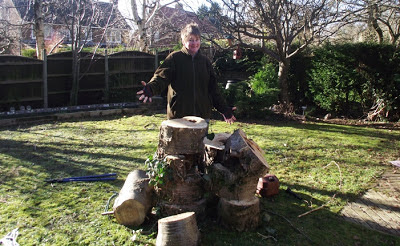 She’s going to store all the wood while it seasons and we’ll reap the logs for next winter. 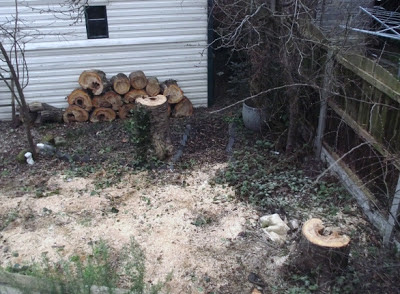 The next 12 miles of the Leeds & Liverpool is a lot older than all the rest of it. This is because this bit started off as the bottom end of the Lancaster Canal, going from the Bridgwater Canal at Leigh northwards towards Preston, but it never got connected to the northern part due to there not being enough money to build an aqueduct over the River Ribble. Instead there was a light gauge railway that made the link, spanning the river on what must have been a rather rickety wooden bridge. When the L&L was begun the company first leased, and then later bought this bit from the Lancaster Canal Co. The Lancaster fell into decline – perhaps because of all the transhipping between boats and railway trucks - and now a very short silted-up arm ending under a bridge where Legend is moored is the only evidence of the Southern Lancaster’s existence.

Ann-Marie’s last shift was on Sunday, so now we can get our lives back to normal. That means a bit more walking, a bit more boating and a bit more visiting. Isn’t Spring Brilliant?
at February 03, 2013