It came as no surprise that three days after leaving work at Yodel, Ann-Marie got a phone call asking her to do another week of nights to cover holidays. So while Dave got on with the engine ‘ole, Ann-Marie went back to Martland Mill and said goodbye to everyone again. She has now really finished, and to celebrate the fact we’ve moved the boat up to Adlington, 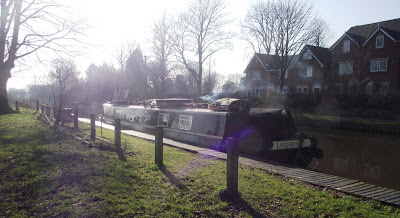 which puts us somewhere other than a Wigan post-code for the first time since November. It feels good to be doing our thing again and although we’re only five miles further on it’s like a different world – mind you, that‘s probably more to do with the three days of sunshine we’ve just had than anything else. Adlington seems like a nice little town; so far we like the café, and there are a couple of pubs that look worth investigating. There are also the Rivington Reservoirs, laying at the foot of the Pennines just the other side of the M61, with a maze of footpaths just begging to be trodden. A week here is just what we need.

The engine room re-fit is almost finished. Hopefully it will have resolved a couple of problems that have not so much plagued us since we started, but certainly niggled. Primarily the bulkhead between the bedroom and the engine room (which forms the back wall of the wardrobe) was uninsulated. This has meant that even with extra ventilation the wardrobe has always been prone to being damp. Also there is only partial insulation in the engine room itself; below the gunnels is bare steel which collects condensation like it’s going out of fashion, which in turn makes the whole thing damp and is turning the plywood black. Also there is a storage issue, mainly due to hastily erected temporary shelves becoming overfilled so that to get to anything you have to move everything else, a task not made any easier by the presence of a huge great diesel in the middle of the 5’ square space you’re trying to work in.

We’ve dry-lined the back of the bulkhead using batons and ply sandwiching 50mm Celotex insulation. That should sort out the wardrobe. At the same time the wiring got trunked and tidied up. The wall linings came off and another layer of polystyrene insulation got put in. The roof lining (which was uninsulated) has had holes drilled in it and we’re going to fill it with expanding foam.
This is what it looked like half way through. 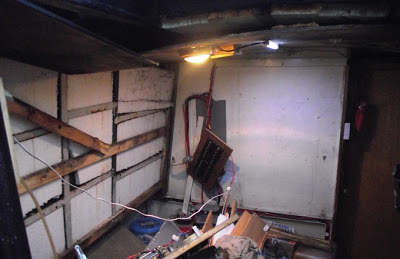 Under the gunnel on the corridor side there is now a new ply panel and a layer of Celotex which should stop condensation dripping into the bilge. We’ve built a partition across the boat going from just above the gunnel on the engine vent side, over the engine and down to the floor in the corridor side separating the engine room into two areas. Below the partition, which includes the back end, weed hatch etc. it is uninsulated and ventilated to the outside. Because warm air from the rest of the boat won’t now get in contact with the steel every time we open the door it should stay nice and dry. Above the partition the walls and ceiling are now insulated properly which will stop it being so damp and keep the rest of the boat a bit warmer. We’ve now got a sensible storage system in there as well, with a drop down door that doubles as a work table. There’s a new panel for the engine controls and the Morse lever is higher up so that you can reach it without having to bend over. The step up to the back door has been redesigned to make access to the weed hatch and fuel cock easier, and because the engine is now under a continuous partition we have the added bonus of it being a lot quieter. We’ve made it all so that it comes apart easily; turnbuckles, wing-nuts and slot-in panels all round mean that when we want to get to the engine it’s a lot easier. 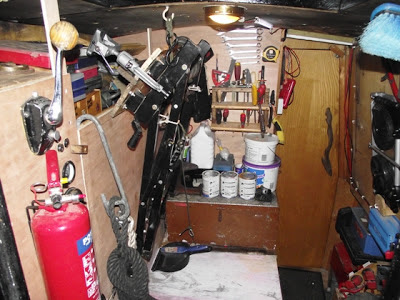 There’s still quite a bit of painting to do and some finishing off but all in all it’s worked out ok.

A week last Thursday we woke up to find that during the night someone had broken into the front of the boat and had stolen our generator and folding sack truck.

Hindsight is a wonderful thing. We have a cupboard to keep the gennie in, we have a chain and we have an alarmed padlock; the employment of any of these would probably have provided enough of a deterrent to thwart person or persons unknown, and would certainly have resulted in enough of a racket to stir us from our slumber. But no. No, we couldn’t have made it easier. We’ve even installed a PIR light in the well-deck that let them see what they were doing.

The twelve-year-old policeman, who turned up with some crayons and a Postman Pat notebook to record details of the crime, must have gone back to Wigan nick wondering how we still came to have any possessions at all with such a sloppy approach to security.

Why we have become so lax about things is simply through a gradual process of familiarity breeding contempt. When we first got the gennie it was locked to something all the time, even when it was running it would be chained to the Armco or a mooring ring. But you get complacent. During the dark winter months we use the gennie every day and all the locking and unlocking becomes a pain, we didn’t believe anyone could get into the boat without waking us up and we got lazy. Well now we know better. A sharp slap in the face from the less savoury elements of society has hopefully brought us to our senses.

Of course what we don’t want to happen now is for us to swing too far the other way and become paranoid. We put that to the test three days after the break-in by leaving the boat where it was and going away; on Saturday to Karen’s where we went out for a meal with Mum and Dad, then on Sunday to Chloe & Shandy’s for a stop-over so that Dave could go to the dentist the following morning. There is no doubt that it was the hardest two nights we’ve ever spent away from Legend, we stoically refused to worry and put our bravest smiles on, but it was with an enormous sense of relief that we returned to find it unharmed.

We’ve filled in the insurance claim form and sent it off, which may have been a waste of a stamp, we’ll have to wait and see. However, what we couldn’t wait for was a new gennie. A re-think in both security and what we use our gennie for has resulted in the replacement being twice the power of the old one and being permanently housed in the well-deck. We’ve moved the blue plug and its RCD fuse box from the back so that it can be plugged in all the time, and the best bit is that the new one is electric start, which means we don’t have to pull it out to fire it up. It can spend all its time locked up in its box and it should only ever be unchained for its annual service.

We had it delivered to Chloe’s as we were back down there the following Saturday for Harry’s 30th birthday. We went out for an Indian with a bunch of our kids’ mates, (or is that our mate’s kids?) it was a really good evening and we spent it feeling old. Frankie had got him a Rally Driving Experience at Silverstone for his birthday and had managed to keep it a secret till the meal. His face was a picture when he opened the envelope, then when he realised it was in the morning he nearly fell off his chair.

We would have stayed to watch but we had to get back to move the boat. We came up here on Sunday morning, Dave walked back and picked up the car while Ann-Marie did some baking, then in the afternoon Bill, Emma, William & Evie came for tea. All very civilised and a lovely afternoon.

The only fly in the ointment with all this seems to be the reluctance of our new Hyundai generator to actually run. We’ve got the Chief Mechanic at GenPower on the case, so hopefully it should all be resolved before long. As usual you’ll be the first to know.

Stop Press: The new gennie is working and there's a chippy two minutes walk from the boat. It's all good.

Stop Stop Press: The new gennie is now back in its packaging ready to be returned with a letter about how we need a machine that does what it says on the box. Thankfully, due to the generosity of our mate Wiltz, we have another gennie on loan untill it's all resolved
at February 19, 2013