After an astonishingly hot week, which everyone who came past our boat commented on, the weather is now much more what autumn should be. Bracing winds and occasional showers make boat painting a challenge, but we’ve managed to do what we set out to and have got red bits on both sides. We tried various methods of paint stripping and found, after wearing out several different types of discs, that this works better and faster than anything else for getting back to bare metal. Even so each side took two days of hard work, and Dave looked like he’d been coal mining each evening. It’s worth it though; smooth, bare steel makes the best start for a smooth, shiny finish five or six coats later. 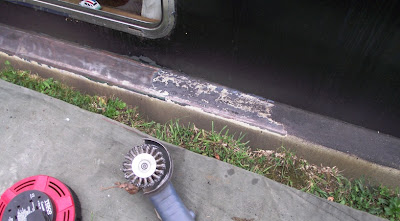 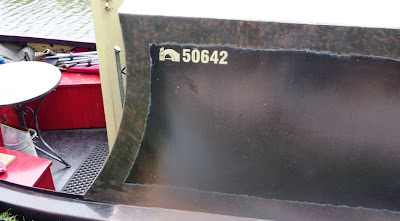 Now we’ve taken the grotty non-slip rubberised stuff off the gunwales we’ve got to put something else on. What we’ll use is a fine silica product that mixes with the paint. We’ll mask off the edges of each gunwale leaving a strip down the middle and put a coat of that on, followed by another coat without the additive. That will leave a tidy, non-slip strip down each side that won’t deteriorate as it wears. Nice.

We learnt a valuable lesson this week. If you’re going to chuck your ashes under a hedge, do it in the morning when the stove has been out for several hours, especially when it’s windy. Luckily we noticed in time and with some frantic bucket work managed to limit the damage to some burned grass and scorched brambles. It was a bit scary for a while though and brought home to us just how isolated we really are when we moor out in the wilds. We’ll be a bit more careful in future.

Now that the weather is getting colder we are lighting the stove in the evenings. If we had any worries about being cold in the winter we haven’t any more. It’s 10˚C outside, in here it’s 27˚C with all the windows open, and tomorrow’s soup is bubbling away on a trivet. The log burner in the house was always kept around 250˚C to stop the chimney sooting up too much. If we get this one over 150˚C the back boiler starts bubbling and we end up in our underwear wafting each other with copies of Towpath Talk. Combine that with the gas oven and the varnish begins to peel off the ceiling. Of course sweeping the chimney is a lot easier on a boat so it shouldn’t be a problem.

On Tuesday we had a trip out to Portsmouth for the Pompey Puddleducks 2CV club’s 21st anniversary. Ann-Marie was the founder member so we got an invite. It was lovely to see that through the hard work of the current membership the club is thriving. Everyone seemed pleased to see us; we had a brilliant evening, won a pumpkin in the raffle, and had some delicious birthday cake. 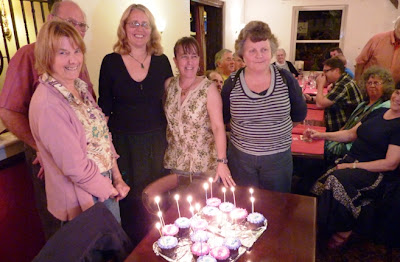 We keep meaning to cycle into Oxford but so far haven’t had a free day when the weather has looked friendly enough. Dave spent 3 ½ hours wrestling with the ring road one morning and swore he was never going anywhere near it again, but we’ve been told by other boaters that access from the towpath is a different thing altogether, and that the city is just as beautiful as everyone says. We’ve got a free day on Sunday, maybe we’ll find out.
at October 07, 2011

I bet that was where I first met Ann-Marie...at a duck race in 1992?
I didn't dwell too long on the mental image of you both in your underwear, never mind what the publication was... ;o)