It’s been very exciting just lately. First, John & Camilla came to see us at Shipton Wier and stayed overnight. We had a walk up to the nearby deserted village of Hampton Gay , then went down into Thrupp and turned round to begin our journey northwards. 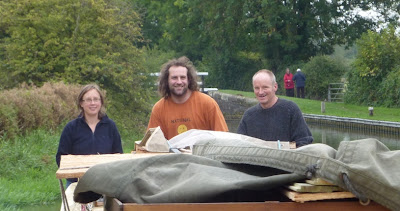 We’ve now gone as far south on the Oxford as we intend to; we’ll be heading in a generally northerly direction, with various meanders sideways, for quite some time to come. Until we get to Preston, in fact. John used to live on a narrowboat called Andante and he took the helm for the day; the first time he’s had his hand on the tiller in 10 years. Andante was the first narrowboat that we set foot on, and was one of the steps towards our life now, so it was nice to get John’s seal of approval on Legend, so to speak. We moored in Shipton-on Cherwell, just down from the church.

We finally got our act together and cycled the 7 miles down the towpath to the junction with the River Thames at Oxford. 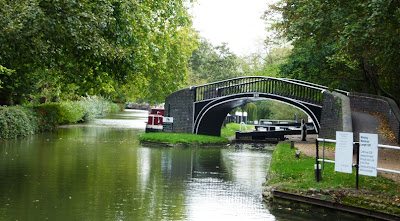 We had a lovely day wandering around what is a truly stunning city, just as spectacular as any that we’ve seen on our travels. 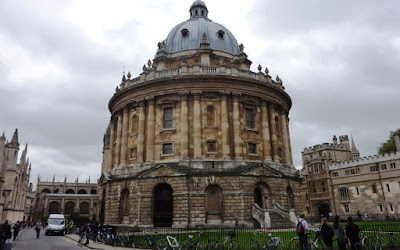 All spires, parks & bicycles with a covered market to match anything in Europe. Of course the names of the colleges are familiar to us, and anyone who’s spent any time watching Bamber Gasgoine and Co., but it’s still slightly weird to be walking down a little city lane past the back door of “Queen’s College, Oxford”. And impossible not to do an impression.

We left Shipton, and stopped for two nights at Baker’s lock where we’d spotted a nice pile of ash wood. BW had done some branch lopping on the towpath so we carted all the decent sized stuff back to the boat, where we sawed and split it. Ash is the best stuff for firewood; it’s dense and long lasting. Both the side lockers in the well deck are now full of logs and there’s a load on the roof as well. It might last till spring, or it might not; either way it’ll save us money on coal. While we were there Dave got the paint brushes out again. There is now non-slip on both gunwales; however there doesn’t seem to be enough on the right one, as you will see…

As we were on our way from the top of Baker’s lock to the bottom of Pigeon lock, (there’s nothing in-between, so it should have been a gentle early morning cruise) we came across Nuneaton & Brighton; a working pair of historic boats. Normally this would have been a good thing, we love the sound, smell and look of the historic stuff, but not this time. They were coming towards us, both fairly well laden and Nuneaton, the motorboat, had run aground on a mud bank just before a winding hole. Brighton, the buttyboat, had run up alongside, which meant that the pair of them were effectively blocking the navigation. We pulled over on our side of the winding hole and Dave went to see if there was anything we could do. The skipper asked if we’d give them a tow, so we turned in the hole and reversed back to the motorboat; no mean feat in itself, what with all the silt. With Legend’s help Nuneaton cleared the mud bank where we let her free, then she crossed the winding hole and re-attached the towing line. With a big yank on the stretchy rope Brighton cleared the mud and with a wave of thanks they disappeared. 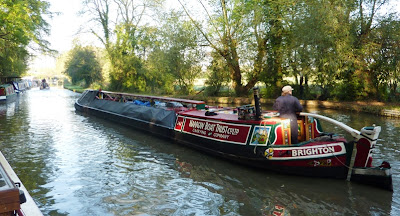 We were then facing the wrong way and had to once again turn round in a silted up winding hole. Half way through this palaver Ann-Marie was coming down the right hand gunwale with the centre rope in one and thought it would be fun to go swimming. Scream, Splash, Brrrr! Well one of us was going to be first; no doubt both of us will have a dunking before too long and all things considered, apart from the severe nettling as she climbed out, it could have been worse. The boat wasn’t moving, Dave could get off with a rope to help her out and she didn’t have far to swim. After a hot shower, apart from oozing adrenaline, she was back to her old self. It made us think though. If we’d been moving, if it had been the steerer, if there hadn’t been an easy bank to swim to, what then? A life-belt and a plan have become priority items.

At Pigeon lock Annie, Wiltz, Kim & Luke came to visit. In the afternoon we pulled the pins and took them up to Allen’s lock at Upper Heyford. We almost got caught out by the Autumn evening; by the time we got there, dusk had been and gone, the solar fairy lights were on and we could only just make out the banks. Boating at night isn’t exactly illegal but it’s certainly frowned on, especially by the bow-thruster types. As there were no spaces left we ended up half on the lock moorings, which is frowned on as well, but as we were going through the lock first thing in the morning we made an exception. After tea Annie, Kim & Luke went home and left Wiltz behind. He’s recuperating so a couple of day’s boating was the order of the day. 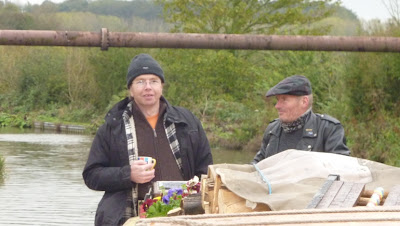 We sent Annie a ransom note written in news-print, telling her that we’d kidnapped her husband and that if she wanted him back she had to put her feet up, eat chocolate and watch a soppy film. The cruise from Allen’s Lock to Nell’s Bridge was so blustery and we had to stop at the pub at Aynho for refreshment. Oh dear, what a shame.

We’re now back opposite The Pig Place where we’re stopping for a week or so. Last week we contacted The Little Sewing Boat about a cratch cover. They have two boats; a live-aboard and a workshop and they move around the country doing upholstery repairs, new covers etc. How’s this for jammy? They could have been anywhere on the system, but they were at Napton heading south. A fortnight later they would have been past us on their way to the Thames. We should meet up with them in the next few days and, if the price is right, they’ll moor up next to us and make us a lovely new canvas cover. Somewhere to take our wellies off and keep the kindling dry.
at October 18, 2011

Ooh I could do that job. Along with spinning wool and knitting it into cosy jumpers. Didn't realise I'd have to have a separate boat for it all though :oD Thanks for your lovely stories. Nice to see John again too.