By no means could our time at Hawkesbury Junction be described as wasted. First there was a day spent making marmalade... 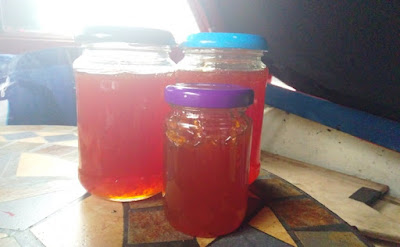 ...whilst at the same time cutting and splitting all the remaining ash that we had on the roof. The next day Diane came to visit, which of course involved cake, scones and craftiness. That evening we went over to Lindsay and Paul’s boat and had a takeaway. We were going to go out for a meal to celebrate Lindsay’s birthday, but they’d had to take poor little Jack to the vet’s and were waiting for a phone call to say they could go and get him. It wasn’t quite the celebration it should have been, but it was good that we were able to be there and be a bit of support for them. (Good news - a week later Jack is almost back to his old self.) Lindsay had once again very kindly put our licence discs through her photo editor and we were very impressed with the results. 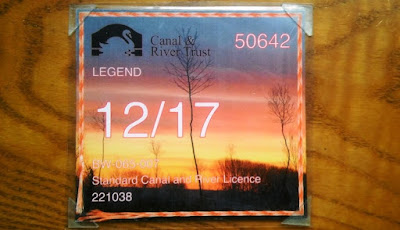 In the morning we were up early for another of our road trips. Going away from the boat in the winter requires planning. All the pipes from the water tank to the taps have to be drained to prevent them from freezing. Because we have a gas water heater this involves one of us opening the drain valve while the other one blows into the hot tap in the kitchen. Ideally we’d have emptied the freezer so we could turn the power off but there was still stuff in it. Plan b was to run the gennie for a couple of hours with the fridge on its coldest setting and the battery charger on, then turn the fridge to its least cold setting just before we left. The forecast was for temperatures between -2˚C and +4˚C, so hopefully, even with only a small amount of sunshine, the solar panels would be able to keep up with the power  drain.  As we knew we’d be coming back at dusk to a cold boat, we let the fire go out then set it again so we’d be warm as quickly as possible.

Our first port of call was Bristol to see Dave’s sister Anne. In the afternoon we had a walk through the city and round the floating harbour. 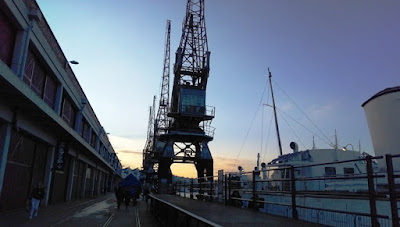 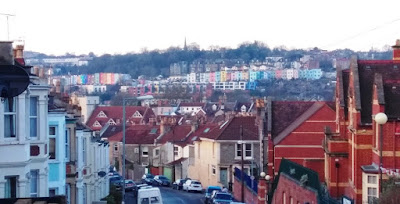 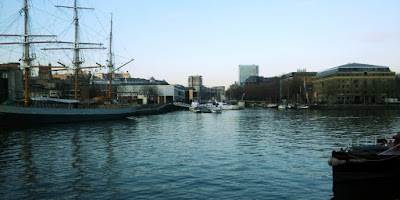 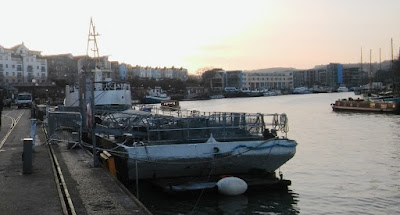 That evening there just happened to be a lantern parade in the city; local junior schools, playgroups and nurseries had all come together to form a brightly lit musical carnival that snaked through the streets just as dusk was falling. We had a quick half in the Spotted Cow while we waited for it to start, then followed the parade through the streets to the finish. 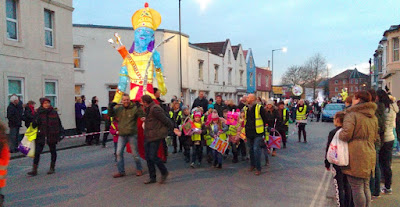 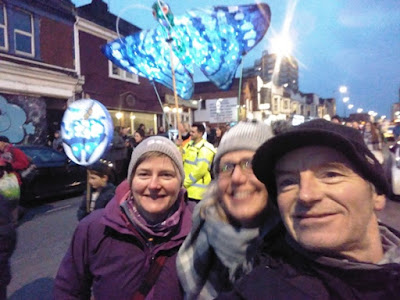 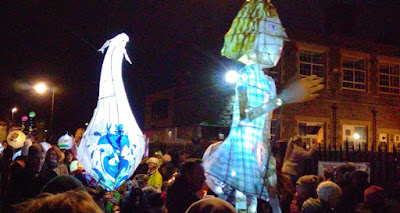 The amount of effort that had gone into constructing all the various illuminations was quite moving.
On the way back to Anne's bedsit, we came across this... 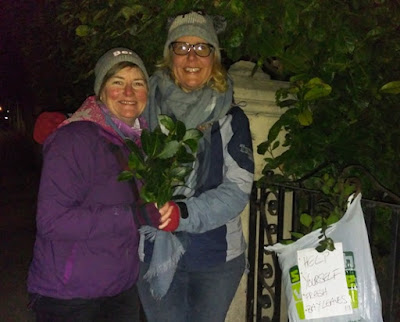 ...which was very serendipudosious as we'd run out about a week before.

Leaving Bristol the following morning we carried on into the West Country to a little village near Bude, where our old friends Jacqui and Al have bought a beautiful cottage. 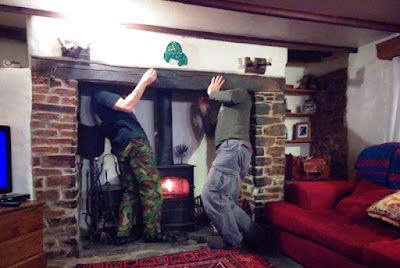 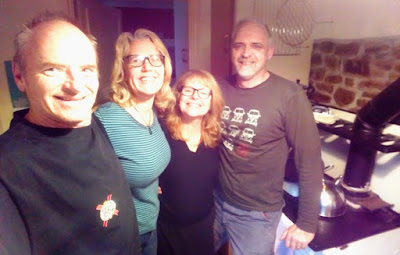 We had an evening of catching up and they taught us how to play 5 Crowns. Great game!

Another morning and another sunny drive westward, this time to Sancreed, near Land’s End to see Kate, another of Dave’s sisters. We had posh fish finger sandwiches at Sennen Cove with Kate and Rod, followed by a stroll along the beach... 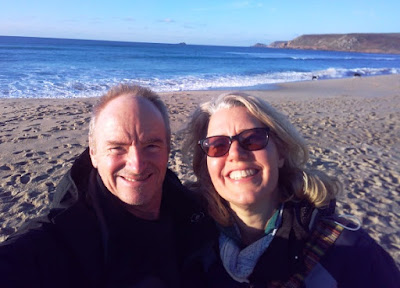 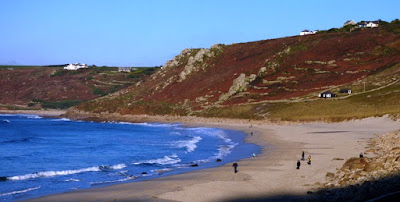 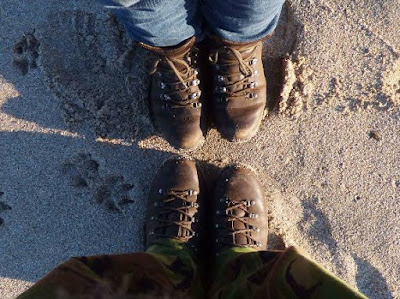 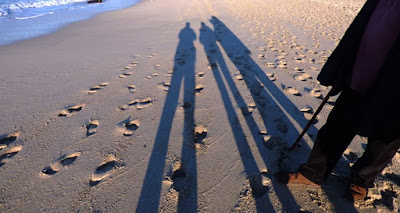 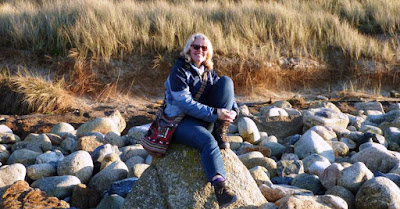 ...then we all went over to Land’s End to watch the sunset. 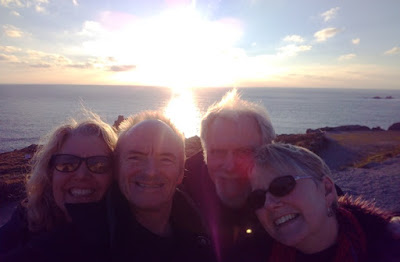 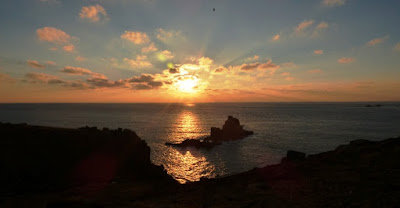 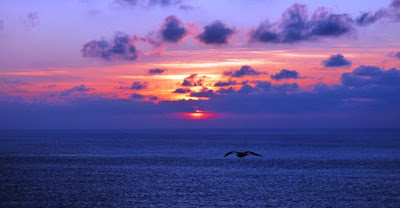 After dinner back at Kate’s flat we sat down and played Cluedo which, despite Dave’s best attempts at cheating, Ann-Marie won, with Kate hot on her heels.

In the morning we filled up the screenwash bottle for the third time in as many days and set off up the A30 back towards the metropolis. We popped in for a cuppa with John on our way, then left sunny Cornwall behind. By the time we got to Karen’s it was foggy and cold again.
We’d gone to Karen’s because the following morning at 6am we were working at Heathrow. Not quite as glamorous as you might imagine, we were counting passengers boarding and alighting the Heathrow Express deep in the bowels of the airport. 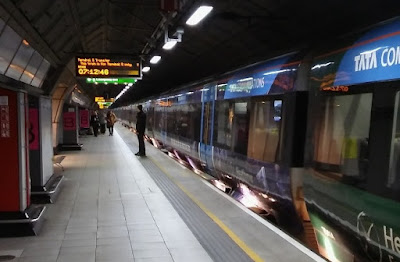 We finished at 2pm and drove back to the boat via the chippy at Brinklow (excellent cod & chips). Within an hour of getting back we’d got the fire lit, refilled the water pipes, had dinner and were in bed with hot water bottles watching catch-up. The plan for the batteries had worked and they were at 12.9 volts. Very impressive.

On a cold and sunny morning we left Hawkesbury and headed north up the Coventry canal to Marsworth Junction where we turned right onto the Ashby. 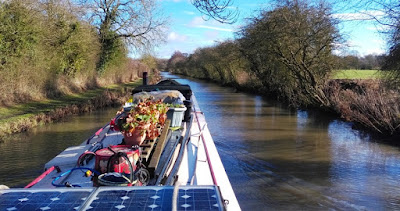 On the way we came across a boat that had come loose and was half way across the cut. 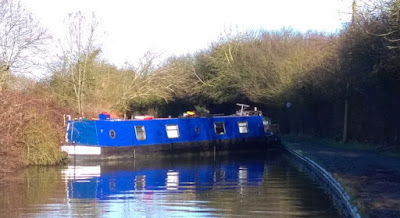 On inspection, after we’d pulled over and hauled it back in, we found that it still had a piling hook (sometimes called a nappy pin) attached to the back rope; either it hadn’t been hooked onto the Armco properly or, more likely as we were on the outskirts of Nuneaton, some jovial young prankster had unhooked it.
As we came past Burton Hastings the clouds gathered and the sun started to disappear. We pulled up at the next likely looking spot at Goodacres Bridge and had lunch while we decided what we were going to do in the afternoon. 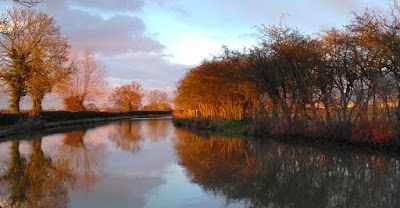 Our view at Goodacres Bridge

As the weather was still OK we plumped for moving the car forward to Basin Bridge where there was a very handy car park.

When sold our house, we gave Digs and Bailey, our two cats, to Mum & Dad. Digs died about four years ago and on the walk back for the car, we got the very sad news that Bailey, after using up far more than nine lives, had gone to join her. He’d lived with Mum & Dad almost as long as he’d lived with us and they were really upset, but we all agreed that at seventeen he’d had a good innings and he’d been on borrowed time for six months or so. He was a fabulous cat, everyone’s best mate and the world is a sadder place without him. 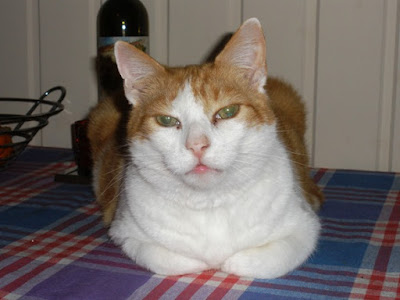 After one night at Goodacres Bridge we moved up to Basin Bridge where the car was parked.

Dave had a clear-out in the engine room then went wombling for firewood while Ann-Marie started sewing up the jumper that she’d knitted for Caleb. About six weeks previously Ann-Marie had injured her wrist by a combination of twisting it while pulling a lock gate followed by some feverish cross-stitching, all of which had resulted in a Repetitive Strain Injury and a period of wearing a splint. That afternoon she tried knitting again and happily reported it to be pain free in short bursts.


We’d only been back at the boat for a week and we were off again. Unlike the spur of the moment Cornwall trip, this time we’d had a fair amount of time to organise ourselves. That meant we’d eaten all the food in the freezer (the final few meals had been interesting to say the least) so just before we left we could isolate the domestic batteries and leave them connected to the solar panels. Once again we set the fire, but as the forecast didn’t have any sub-zero numbers on it we didn’t have to drain the water pipes.

Our off-boat travels this time were to Antrim to celebrate Caleb’s Christening. We’ll tell you all about it next time and try not to bombard you with hundreds of pictures of the most gorgeous baby in the world.
at February 10, 2017