Our first mooring of 2017 was one of our favourites. We refer to it as All Oaks Corner because it‘s next to All Oaks Wood near Brinklow. 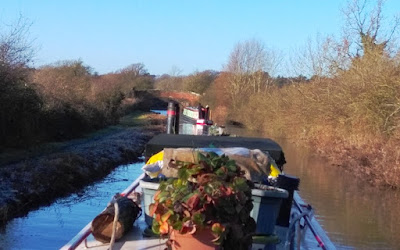 Frosty Boating from Hillmorton to All Oaks Corner 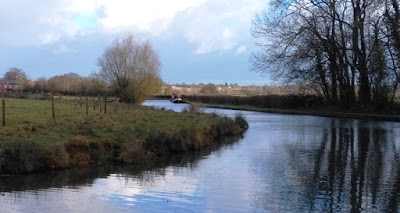 Chilly Day at All Oaks Corner.

Last time we were there, the ewes in the field on the other side of the cut had just given birth and we watched the new lambs gambolling down to the canal for a drink. This time when we looked out of the window the sheep looking back were way past their gambolling days and just looked cold and miserable. The day after we arrived the canal froze over and remained frozen for most of our stay. 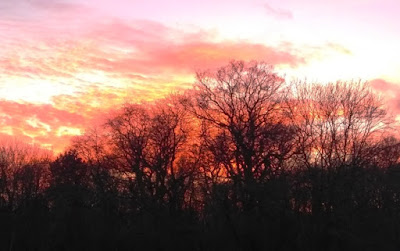 Sunset at All Oaks Corner

When we walked back for the car, instead of following the towpath we cut across the fields back to Newbold. If we’d got up a bit earlier and got out before the sun had time to defrost the mud it would have been lovely. Well it was still lovely, but in a very muddy kind of way.  On the plus side there was a fallen ash tree in the field alongside our mooring, so with the help of Dave’s Christmas present...

...by the time we left most of it was on our roof. 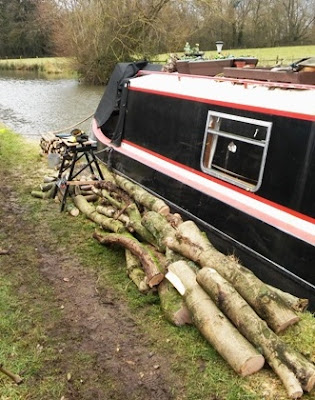 This is our sixth winter on the cut and so far we think we’ve got away quite lightly. The year before we moved aboard Legend other boaters told us that the temperature in some places was as low as -15˚C and the canal was frozen for seven weeks. That length of time without moving creates a whole raft of problems and over the years we’ve tried to address as many of them as we can to make sure that if it gets as bad as 2010 then we’ll be prepared. One of the less savoury problems is this – If the taps are frozen, having emptied the toilet cassette, how do you then rinse it?  Our solution, which we had cause to test out at Hillmorton services, is to take a bucket along and, after making a hole in the ice, fill it with canal water.  Cassette rinsed, sluice flushed and a happy boat again.

As it was a new year, and as we’d bought a new duvet and some pillows for when the kids came to stay, we felt we ought to embark on a rather ruthless boat clear out, starting in the wardrobe and proceeding towards the bow. This resulted in a bin bag of stuff going to charity shops and another bin-bag going in the clothing re-cycling bin at the tip. There is now more air circulating in the wardrobe and all the spare bedding fits in the cupboard under the bed again. We have yet to address both the engine room (which used to be tidy and now isn’t) and the bathroom cupboard.

Over the first January weekend we had a round trip in the car. Our first port of call on Saturday was Great Haywood marina where Laura and Alison were moored for the winter. We all went for a walk past Tixal Wide... 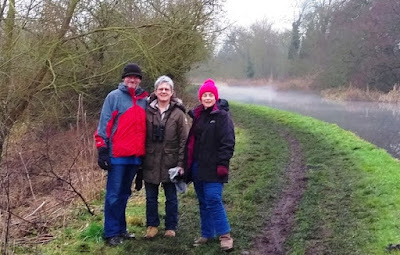 ...and through the Shugborough Estate before returning to Large Marge for delicious pork chops from the farm shop for tea. In the morning we had what is fast becoming a tradition with the Margees; a pyjama party with bacon butties.

On Sunday we were off to Mytchett and a celebration meal out with birthday girl Karen, birthday boy Andrew, Mum, Dad, Wendy and Alex. 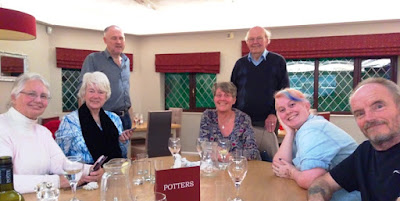 No pyjama party this time as Karen had to go to work on her birthday, but we got up and made her scrambled eggs on toast and had pancakes for when she got home. In the evening we were back to a very cold boat, where we sat and ate steaming soup... 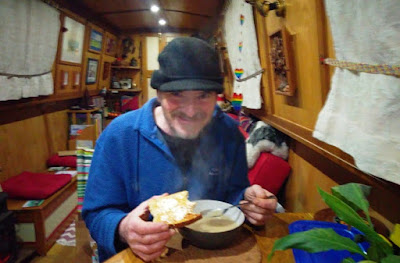 ...before snuggling into bed with hottie bottles while our little Morso worked its magic.

The horrendous storm that had been forecast for the second week of 2017 was, when it arrived, a bit of damp squib. There was some mild gusting, a light sprinkling of snow and then it went back to being grey and cold. We walked into Brinklow and back along the cut where our day was cheered up no end by some beautiful snowdrops holding their heads high and banishing the winter weather. 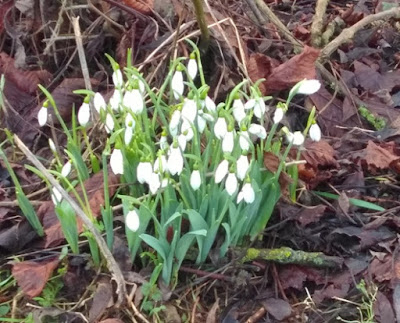 Lindsay and Paul were away from their boat for a night so we looked after Jack, their spaniel, while they were gone. 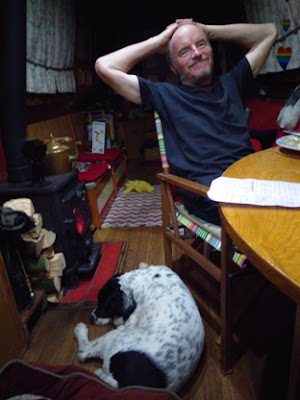 He’s a lovely dog and it was a pleasure having him to stay, although we’re not sure he was all that happy about the arrangement. Every time we went past our car he stopped and looked at us as if to say “When am I going home?” In the morning Dave took him out for a walk in the pouring rain and then just after they’d both dried out Paul rang to say he was back. We picked Paul up from the station and took him back to Happy Daze where Jack was a whole lot happier.

We waited till the afternoon when the rain stopped before pulling the pins and setting off from All Oaks to Ansty and moored up opposite the pub just as the light was fading. On the way our trusty old Lister engine was a bit lumpy to start with, but it cleared up after a mile or so and was fine the rest of the way. We put it down to air getting into the fuel line from not being used for a fortnight, however, two days later, when we set off for Hawkesbury Junction we found the real reason. On the day in-between Lindsay and Paul saved us a very boggy walk or a wet cycle ride back to our car. The towpath between Brinklow and Ansty is rubbish at the best of times, but after a week of rain in the winter it’s like a swamp.

We’d arranged to meet Bob and Mandy at Hawkesbury. They were coming over in their car for lunch, so we wanted to get Legend filled up with water and moored up in plenty of time. As soon as we’d finished breakfast we set off but before we’d even got to Ansty water point the engine went from fine, to lumpy, to very lumpy, to stopped. With no forward propulsion and therefore no steering capability, we casually drifted into the mud on the off side. Why narrowboats seem drawn to brambles and overhanging branches is one of life's unsolved mysteries. With as much dignity as we could muster we untangled ourselves and like Venetian gondoliers gently punted Legend back across to the towpath. Once there, and with lots of "to me, to you", we carefully maneuvered ourselves round the moored boats to the water point. While we filled up with water we pondered our predicament. Dave dipped the diesel tank and found that there was still about 25 litres in it; we’d been purposefully keeping it low as we were going to fill up in Hawne Basin when we get there, however, we’ve never let it get that low before. We wondered if perhaps we might have got to the point where the circles in the Venn Diagram depicting the end of the intake pipe and the surface of the contents of the tank had overlapped.

In other words we’d run out of diesel.

Plan a. Our first call was to the nearest boat yard, Rose Narrowboats in Brinklow. The very nice lady told us that there’d be no problem getting some diesel from them, but they could only put it in a 20 litre or bigger jerry can, due to their pump foaming up with anything smaller. We could get a jerry can from Screwfix, but at £20 each that made it rather expensive diesel, and we didn’t really want to buy one because we’d have nowhere to put it.

Plan b. Go to a garage and buy a couple of plastic fuel cans, fill them with road diesel and put it in the tank. The first garage Dave went to (Texaco) did sell plastic fuel cans, but at £7.99 each. For that sort of money we might as well have a jerry can.

Plan c. Buy 2 plastic fuel cans from Asda (£4 each) and the diesel from Asda (2p cheaper)

So that’s what we did. Two trips gave us 20 litres; enough to prove our diagnosis correct and, once we’d bled the pump, get us going again. All in all we were stopped for an hour and a half, and for most of that we were filling up with water anyway so we were quite proud of ourselves. With seemingly perfect timing we arrived at Hawkesbury Junction just as Bob and Mandy were walking up the towpath from the car park. It would have all looked incredibly well planned if we hadn’t already phoned them and told them of our plight.

We had a lovely afternoon with Bob & Mandy, after lunch we all went for a little walk up the Coventry canal, then they very kindly bought us a beer in the Greyhound and gave us a lift back to Ansty for the car. Another boggy walk avoided - our friends are so good to us.

In the evening we got the Nicholson guide out to find the next boatyard or marina that we’d be passing so we could get another 50 litres or so. We needn’t have bothered. The next morning while we were eating breakfast, we heard the steady thump..thump..thump of a traditional engine and looked out of the window to see Mark on the fuel boat Callisto coming through the stop lock, loaded to the gunnels with fresh supplies. 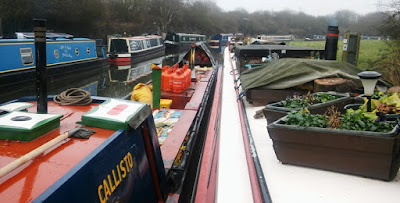 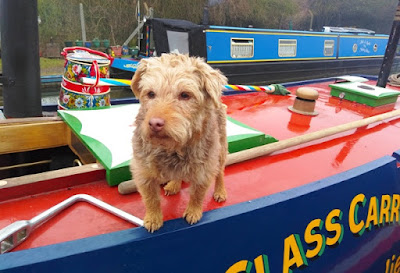 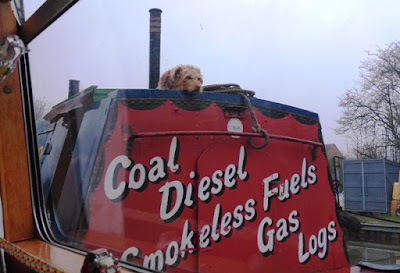 While we were making our purchase, Mark told us that due to a delivery hold up that morning, he was running late and should have been through Hawkesbury an hour and a half earlier. We would have still been in bed and would have missed him. That’s Karma being nice to us again.

We’re now in the lovely smug position of having a full water tank, a spare gas bottle, enough diesel and two empty cassettes. The car is in the car park just the other side of a very nice pub and there are bins, recycling and toilets there as well . As far as boaters are concerned, this is heaven. 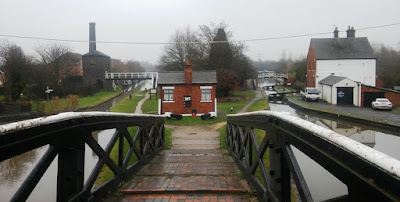 And it Looks Pretty Too