Our flight from Gatwick for Caleb’s christening was interesting. First, upon boarding the plane, Ann-Marie couldn’t find her passport or phone. We thought she’d left them at the departure gate so she was escorted off the plane to try and find them. While she was gone Dave rang her phone and discovered it was in a pocket in her handbag that she never uses! Once she’d suffered the walk of shame down the aisle back to her seat we took off for a very fast and lumpy flight over the Irish sea and landed in Belfast half an hour early. 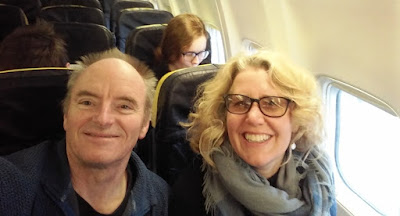 Chloe and Shandy only live about ten minutes from Belfast International so as soon as we landed we gave them a call. Twenty minutes later Chloe rang us back to say that as there was no-one waiting at Belfast City, she was now on her way to the right airport. We went back into arrivals for a coffee.

The christening and the days around it were fabulous. Every day more relatives arrived and by the weekend Chloe had a house full with the overspill in a rented cottage. On Saturday evening we had a big chilli dinner with 14 happy people round the table, then on the Sunday morning Chloe and Shandy did a scrummy Ulster Fry for a similar number. After that we all got into our Sunday best and convoyed off to the chapel where Caleb got put into a dress and had about a million photos taken. 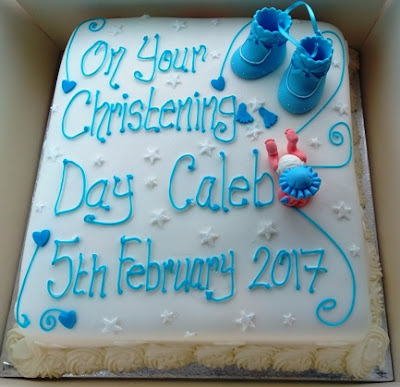 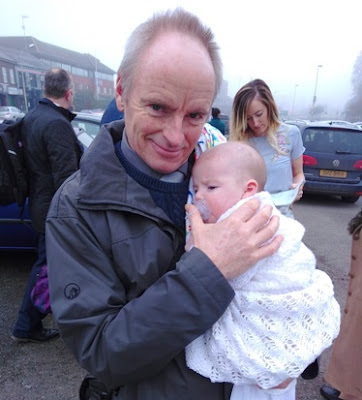 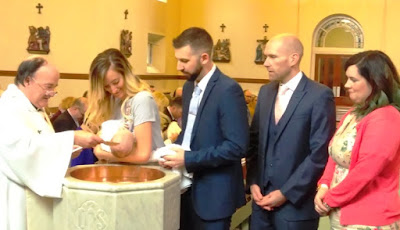 The afternoon celebration was at the golf club and carried on well into the evening with a further extension back at Chloe’s. 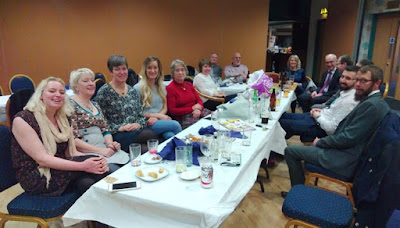 It was brilliant to see all Shandy’s family again and it was sad to have to leave the next day. By co-incidence Jan, Paul, Sue and Brenda were all on our flight back so we had a nice bit of time with them before we took off and said goodbye in baggage reclaim at Gatwick.

Before returning to Legend we drove down to Portsmouth for a night with Fran & Sean. Elaine and Steve came over and joined us for dinner and we spent a lovely evening eating and chatting. In the morning we said goodbye and returned to Gatwick. Frankie and Harry had five hours between landing from Belfast and taking off again for Bordeaux, so we whisked them out of the airport and took them for a pub lunch. Frankie said she felt like a naughty school girl playing truant.

Back at the boat it was the all too familiar routine of fire lighting, generator running, shopping putting-away and an early night with hot water bottles.
Next morning we were back in boat mode; wood wombling, a short move up the cut to Stoke Golding and a squelchy walk back down the towpath to retrieve the car. No matter how exciting and adventurous our trips away are, it’s always nice to be home.

We had a last trip out to Great Haywood for an afternoon of ginger nuts and coffee with the Margees before they leave their mooring. Mick & Pip from Nb Lillyanne came over and joined us. (Pip's blog is well worth a read; her output is far more prolific than ours, and she's far more eloquent too.) The idea of leaving the snuggly cabin of Large Marge and going out for a walk was discussed more then once but each time, upon looking out of the window at the grey and blustery weather, the idea of more coffee and ginger nuts seemed a lot more desirable.

We also had a last trip to see Bob and Mandy at Debdale before they tucked their boat up for six weeks and headed off to New Zealand. 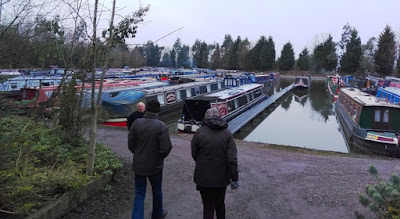 We are terribly jealous; NZ is the one place we’ve been that we’d rather go back to than going somewhere new. We had a lovely walk down the Leicester Arm to Foxton locks and back and probably babbled on about NZ far more than necessary.

Continuing our life of owning a narrowboat, but not spending very much time on it, we had a weekend in Essex with Martin and Yvonne. In the morning before we left, Dave put the gennie on for a bit which upset the fridge, causing it to detect a voltage surge (which there wasn’t, the fridge is just too sensitive sometimes). Anyway, we turned the fridge off, intending to switch it back on again just before we departed, and it was only when we were half an hour down the A5 that we remembered. We could have turned round but as the ambient temperature was due to hover around 3˚C all weekend we chose the crossed fingers option. As soon as we arrived at Marin and Yvonne’s they sat us down for lunch, then we were out for a  lovely walk in their local woods and fields. We got back just in time to watch the rugby, while those non-rugby watching types disappeared into the kitchen to make cheese. 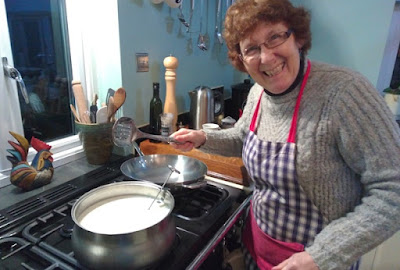 Something got lost in translation between recipe and mixing bowl so it didn’t quite curd properly and ended up as a slightly coarse cream cheese which, with the addition of garlic and herbs, was decidedly nicer than the mozzarella that it was supposed to have been. 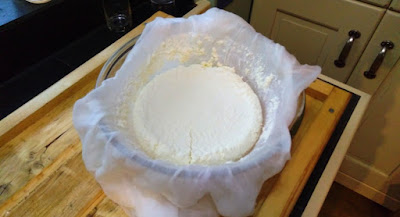 It was delicious anyway, especially with Yvonne’s home-made rosemary crackers.  We like to think we’re quite active, but these two put us to shame. Before we got up the next morning Yvonne had already been out on her bike and Martin was busy designing the new house that they are planning to build in their garden. Next day was a lovely long eleven mile round walk from Honey Tye through the Suffolk countryside. 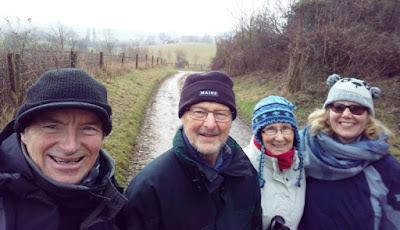 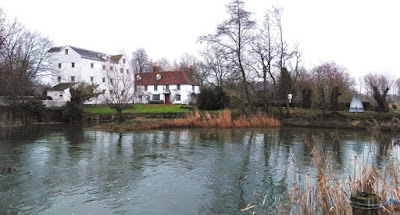 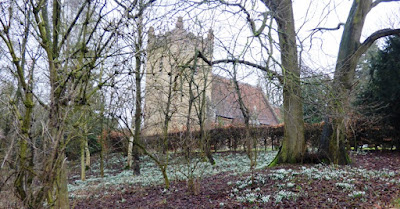 We stopped for a picnic in the vestry of St Stephen’s chapel, then went out to have a look at Bures dragon on the other side of the valley. 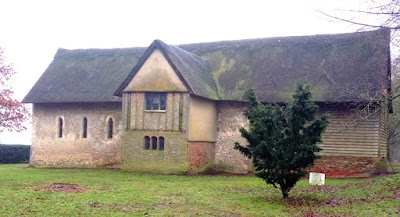 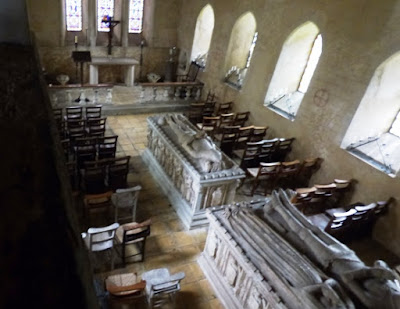 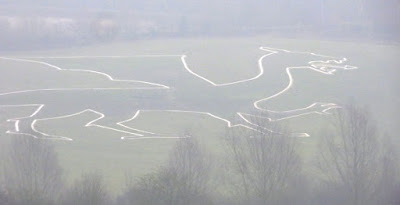 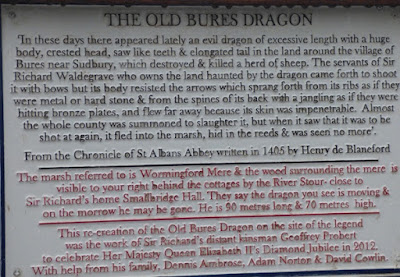 In the afternoon we came across this, which has Lister written on the side of it, Dave thought it might be part of some sort of water pump, but we really have no idea of what it is. 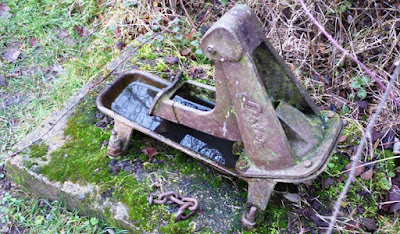 We drove back to Legend with our fingers still crossed, but we needn't have worried, the frozen stuff was still frozen, and nothing in the fridge looked any worse than it had when we left. So, we now know that as long as it’s not going to be too warm, we can switch the fridge off for a day or two with no ill effects. Handy.


We noticed a while ago that the driver’s seat in the car was leaning to one side so, as we had a nice car park close to the boat at Stoke Golding, Dave decided the time had come to find out what had happened. What should have been a simple job requiring the removal of two bolts and lifting the seat out took all morning and involved carefully drilling the bolts out and recovering the threads, but fortunately he discovered that with the judicial use of a welder it could be fixed.
That afternoon we walked round the southern half of the Ambion Way. 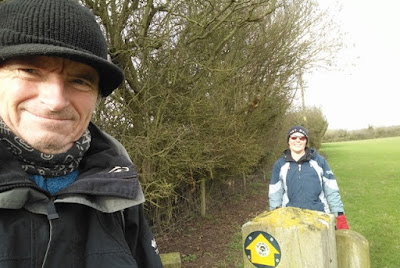 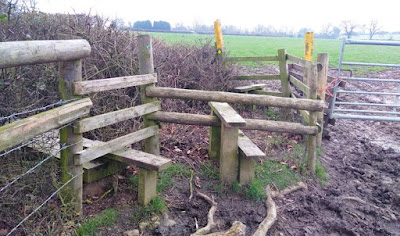 A couple of days later we tackled the northern half, which included Shenton Station and Bosworth Battlefield. 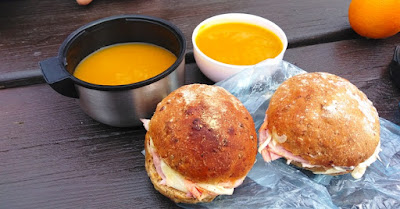 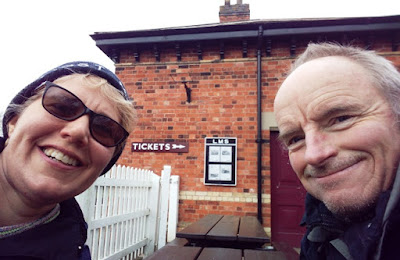 That afternoon we went over to Kim and Luke’s to say hello and to attack the car seat with Luke’s welder. The drive back to the boat was a lot smoother!

We've worked out a timetable for the boat moves we need to do to get us into Hawne Basin for our bottom blacking week at Easter and realised we don’t need to kill any more time by going further up the Ashby. It is a lovely canal and we do like spending time on it, but there seemed little point in rushing up to the end and back, so we went as far as Sutton Cheney and turned round. The turn was text-book perfect, however reversing back to the water point had its moments! After we’d filled up and emptied out we tied up on the 1 hour moorings outside the café and went for a shower in the amenities block, hoping that they’d be nice and hot and powerful. They were none of those, but we saved a bit of gas by using them. We had lovely sunny afternoon with  hardly any wind, and as we boated back to Stoke Golding spring was definitely in the air.