We’re getting a lot of practice at driving up and down the A46/M5 from Daventry to the West Country. We’d only just got back from Cornwall when we were off again to Bristol. We’ve left Legend just below The Bratch; a very popular 3 lock staircase with a resident lock keeper who looks after it beautifully. The grass is always trim, the gardens neat and tidy and the paintwork spotless. Legend should be happy there for a few days. We had to dash off and leave it again because, lucky us, we won a pair of tickets to Bristol Folk Festival. Yipee!! Yes it is possible to get to Bristol by boat; there are several narrowboats in the harbour and it’s on our list of future destinations. If we’d had the necessary river licenses and six months to do it we wouldn’t have hesitated. However we hadn’t so, after spending Friday with Chloe, (the afternoon in Ikea spending her money, the evening at her house with Janice and Paul – great fish & chips, by the way – and the night in her spare room) we were heading west again.

The line-up at Bristol is great; Show of Hands, Cara Dillon, Afro Celt Sound System and lots of other good stuff. It's all on at the Colston Hall right in the middle of the city centre, so it's a bit different to other festivals we’ve been to. There's no marquee for one thing, just two stages in a warm, dry, acoustically perfect theatre. And, of course nowhere to pitch a tent; instead we are experiencing the delights of “indoor camping” which, we happily discovered, is as much floor as you want in a church crypt, plus use of a kitchen and toilets. Again it’s warm and dry, there’s a fan oven, the water never runs out and we can sit opposite each other at a table without our knees touching. Our fellow campers seem to be grimly enduring the primitive conditions, we can’t think why – we’re revelling in the luxuriousness of it all. And what a front door! 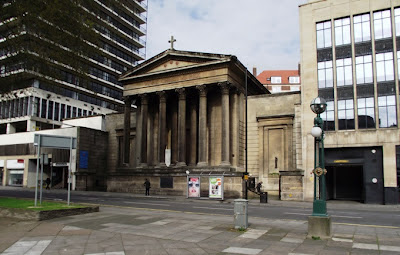 Our personal favorites from the 150-odd acts over the 3 days are a brilliant performance poet called Ash Dickinson, a very talented 18 year-old singer songwriter and future star called Kitty Macfarlane, and our old friends 3 Daft Monkeys who had us all bouncing around like loons on Monday evening before we attacked the M5 for the final time in the pouring rain.

Dave has got another dentist appointment on Tuesday, so our next boat move will be Wednesday, followed by several more over the following few days. Hopefully we’ll be well up the Shroppy by our next instalment.
at May 07, 2012

The line up sounds brilliant as does indoor camping. Thanks for posting.