Over the past couple of weeks we’ve bimbled back up the Stratford Canal in glorious weather stopping at Edstone, Preston Baggot, and Lowsonford. Sue & Dave came to be crew for a weekend 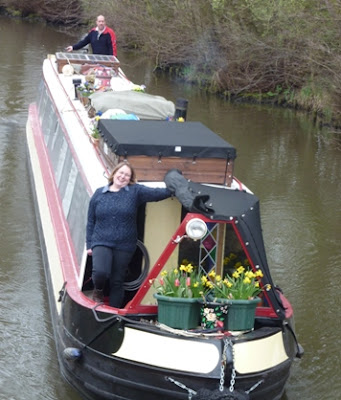 and to make a delivery. Dave does lovely things with wood and we’ve wanted something created by him on Legend ever since we bought it. Now we’ve got this. 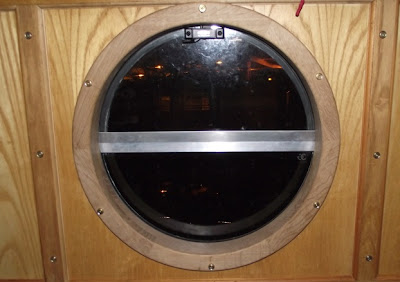 Gorgeous isn’t it?
We climbed up the 6 locks to Lapworth on the Saturday, then on Sunday we attacked the rest of 26 that make up the Lapworth flight. Almost as soon as we got going we caught up with NB Atlantic, single handed by Nick, who very kindly offered to pull over and let us go up in front. In return for the favour, when Karen, Andrew and the kids turned up, giving us a crew of 8, we sent a windlass wielding detachment back to lend a hand. Nice bloke, nice boat, nice dog, and another waterborne friend. Of course with this much crew there was lashings of tea and cake to provide sustenance throughout the day and Ann-Marie got to test her new 2 tier cake stand. At the top of the flight the Stratford attains the “Birmingham Level” of 453’ above sea level. 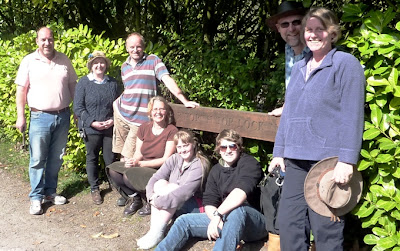 From here right into the city centre and all through the BCN there are no locks, apart from the 3 up onto the Old Main Line and the “Wolverhampton Level”. We moored up at Hockley Heath, outside the Wharf Tavern, where Wiltz, Annie and Kim just happened to be having dinner, so they joined everyone else back to the boat for cake. It’s great when a plan comes together.

Back on our own again the following day, we drove from Hockley Heath into Birmingham to recce mooring/parking for the next couple of weeks - Tipton Green looks favourite for the most part; really good chip shop - and then went to have a look at Hawne Basin where Legend is being pulled out for blacking. We followed the sat-nav to the postcode, only to hear, at the end of a road in an industrial estate in Halesowen, those dreaded words “You have reached your destination.” when we quite clearly hadn’t. Big industrial units all around us, no sign of a bit of old rope, never mind a boat yard. We sat in the car for a while, pouring over the big OS map, then decided to turn round and have another go from a different direction. As we moved forward a set of gates appeared from behind a bush with “Coombswood Canal Trust. Visitors welcome.” written on it. Doh! We explained who we were to a very nice chap on the other side who opened up for us to drive in. Not for the first time we felt as if we’d passed through the back of the wardrobe; old canal places have that effect. One minute you’re in the harsh, fast, uncaring 21st century, the next you’re in this cosy, friendly haven. The bloke who runs the slipway was more than helpful and we now know exactly what’s going to happen when we turn up. It’s nice to know that plans you’ve made are going to come together.

The next morning, despite dire warnings and drizzle, and dressed up like Nanook of the North, Dave chose to crack on towards Kings Norton. He gave up half way at Shirley drawbridge. The inside of a Narrowboat feels even more warm and snug when you’re hugging a hot chocolate with your feet in warm slippers after standing on the back for 2 hours in the snow. Even when a plan doesn’t come together it’s still not the end of the world.

We left it till after the rush hour had calmed down the next morning, then did a beautifully co-ordinated pass through the drawbridge 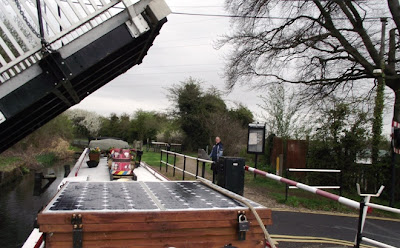 stopping the traffic for less than a minute. As we approached Brandwood tunnel the signs of ever increasing suburbia became more evident; the rubbish in the water and graffiti on the bridges was disappointing, but as a sort of antidote to all that we noticed a lot of gardens backing onto the canal, where people had little jetties or fishing spots or just a bit of decking with a couple of plastic chairs. In the tunnel, on its second testing, our new/old 2CV headlight passed with flying colours; Netherton should be a piece of cake. We moored just past the guillotine stop-lock at Kings Norton having for the first time navigated an entire canal. Stratford-upon-Avon - tick. Frankie and Harry came aboard in the evening to stay for a couple of nights and share our discovery of Birmingham.

In the morning, with our Easter Bunting flying in the wind, painted eggs and paper chains in the windows and tummies full of Hot Cross Buns, we turned right at Kings Norton Junction onto the Worcester & Birmingham. 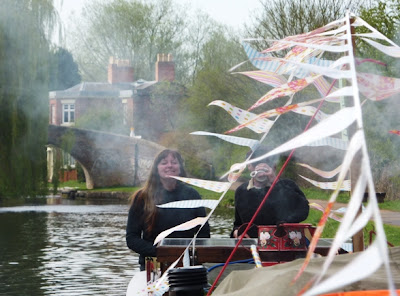 Frankie’s cousin Cat and her boyfriend Ben live in Edgbaston so we’d told them we were on our way and they came aboard just after the Cadbury factory at Bourneville.

More Hot Cross Buns followed, and with a crew of six we crossed the new aqueduct, passed the vast Hospital and University with Cat giving commentary, and slipped into the water point at Granville Street wharf, opposite the Mailbox with The Cube towering above us. There wasn’t a lot of room on Gas Street Basin moorings, so after filling up we chugged our way through, waving madly at all the people, who all smiled at the bunting and waved madly back, went under broad street Tunnel, then turned onto the main line at the roundabout and moored between the two entrances to the Oozells Street Loop.

In the evening we went for a walk down Farmers Bridge Locks. The feeling you get walking down the towpath at the side of them at night is both exciting and scary; they go right underneath a high-rise block and Snow Hill railway station, and again belong to another world. 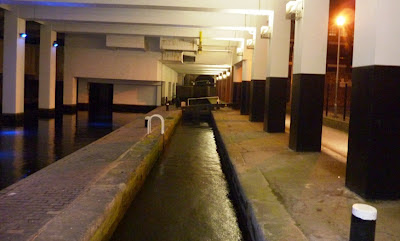 A little corridor of old brick and iron-work worn smooth by 250 years of boots and hooves is hidden beneath the sharp edges and massiveness of modern architecture. It wouldn’t have surprised any of us if a cloaked figure wearing a dear-stalker had appeared in a waft of pipe smoke from under one of the bridges.

We are incredibly impressed with Birmingham. The moorings are well kept and tidy, the service blocks are clean and functional, everything is really well signed and we feel totally safe here. We have no doubt that it’s not like it was in the old days - nothing ever is. Dave remembers coming here 20-odd years ago when the only way to get into Gas Street Basin was down these stairs 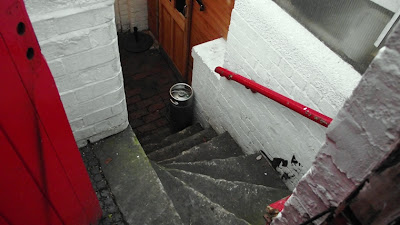 and very few people bothered. This is the scene now. 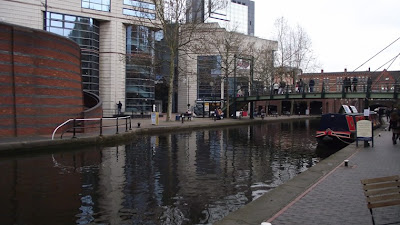 Waterside developments can only be good for the future of the canals; the more the general public see them as a National Asset rather than an embarrassment the better. Our opinion is that British Waterways, within its financial constraints, has done a fine job of changing public opinion to one of overwhelming support for canals and rivers, and thereby making the challenge faced by the new Canal & River Trust a lot easier to take on. 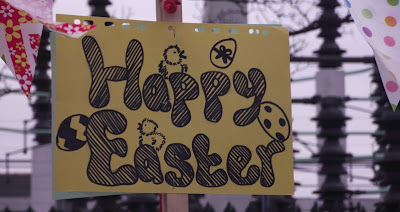