By complete coincidence Legend came out of the water almost exactly 1 year after we bought her. The reason we ended up on the slipway at Hawne Basin was because John & Jac, who had originally booked the week, ended up doing all their painting and blacking in Braunston last year. As they’d paid a non-returnable deposit they gave us their booking. Thank-you guys, it was even better than we expected. The slipway crew made pulling 17 tonnes of boat up a slope look easy; a trolley runs on rails into the water, the boat floats over it, and then the whole lot is gently winched out. They do it every Friday and are very slick. The facilities in the basin are lovely; on Friday afternoon we found ourselves in the clubhouse with tea, cake and raffle tickets. All very civilised. However, that was about the last time we stopped to do anything social all week.

Here’s what we did do.

First, as part of the slipway hire, Tony (The Main Man) pressure washed the hull and declared it “Not too bad really, I’ve seen a lot worse. Some of ‘em are down-right fright’nin’!” only he didn’t say “down-right”.

After that we were left pretty much to ourselves; the only rules were No Grit Blasting and No Spraying. By Friday night we’d got the first coat of hull blacking on, 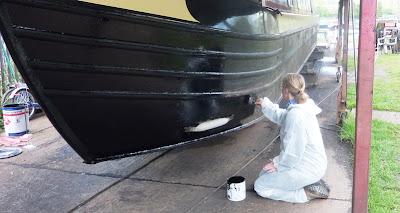 on Saturday we took the rudder out for cleaning and painting. (Actually what happened was that we undid the bolts and slowed it’s decent to the ground. A bit.) We cleared and prepped the roof, put another coat of blacking on the hull and Tony put 4 new anodes on. 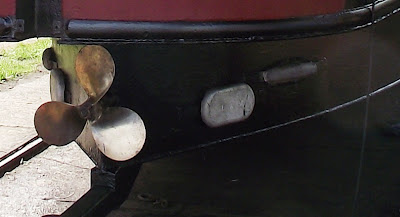 These are 4Kg lumps of magnesium that are welded to the hull below the waterline. They’re sacrificial; in other words, instead of the steel boat going rusty, the magnesium (being more volatile) gradually disappears.

On Sunday, John (of “John & Camilla” fame) came over to lend a hand. Just as well really; no way would we have got the rudder back in on our own. John and Dave manhandled it back up and we put 10 nice new stainless bolts in the holes, which we feel is a vast improvement over the 5 rusty ones that have been holding it together till now. John took the weed hatch out and then bravely went up the hole from underneath with a blacking brush. That’s what friends are for, eh? We put what was left of the blacking along the waterline, where the fenders rub and on the rubbing strakes. That was 20 litres of Intertuf 16. If it had been warmer we would have probably got 3 coats out of it, but as it was so cold and thick we’d got through it all in 2½. Still, we figure 20 litres is 20 litres, and it had from Sunday to Friday to harden before it got wet. In the evening we masked off all the cream bits and undercoated them.

Monday. Still cold and now raining. The roof and all the other cream bits got their first coat of gloss 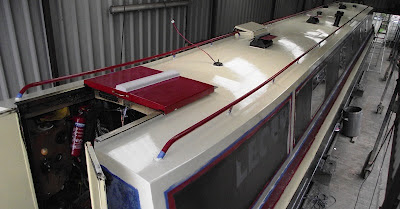 and all the old paint, blacking, and ugly chunks of welding got stripped off the stern. (At some time in the past there was a platform attached to the back, probably for a generator, and the remains of the supports had been left behind.) In the evening, under the strip lights, Dave marked out the sign writing for the front.

We went out shopping on Tuesday – more paint and another tin of Owatrol, (terrific stuff!) then back to our fridge/wind tunnel for the second coat of cream gloss 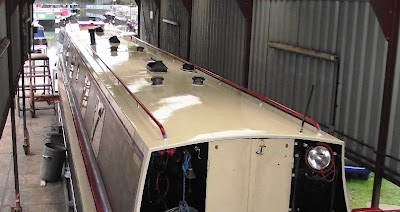 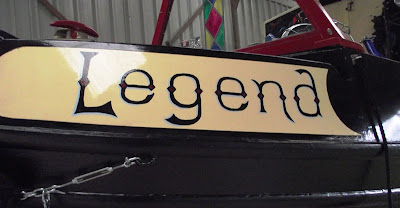 On Wednesday, although it wasn’t in the plan, Dave took a wire brush to the tumblehomes. (The bit between the top rubbing strake and the gunnels.) It made sense to attack them while they’re at shoulder height rather than kneeling on the towpath. After kneeling on the roof for 3 days it was nice to stand up for a bit, so by the end of the day they’d been prepped, red-leaded and black undercoated. We’ve given the back end a more traditional colour scheme of cream & red and brought out the detail on the steelwork in black; over the week it got red-leaded, undercoated and given 3 coats of gloss 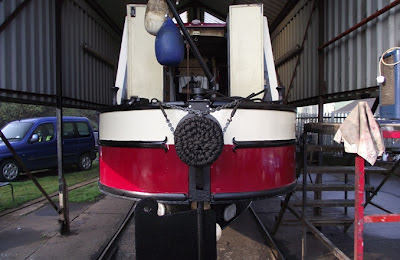 On Thursday we carefully put all our stuff back on the roof. The paint is going to take a couple of weeks to harden so we’ve got to look after it. The tumblehomes got a rub down and coat of gloss black 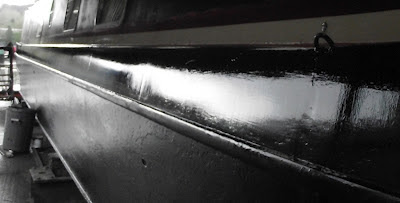 much nicer than the flaky cream, they’re going to get another 2 coats in a while, but the 3 coats they got in 2 days need a bit of a rest. In the evening , to celebrate our achievements, we went out to the nearest Weatherspoons for dinner and a de-frost.

We were up first thing on Friday morning with fenders and ropes attached, and by 9am Legend was being gently lowered back down the slipway into the water. 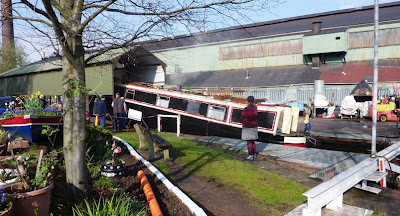 bought some coal and a bottle of gas, did some laundry and then with a cheery wave, chugged under the bridge out of the basin and back up the cut towards Windmill End.

Despite everything, despite being cold, in a shed, up some wobbly steps at the wrong end of the boat and being right out of our comfort zone, it’s been good. We got far more done than we thought we’d have time or energy to do; all that’s left now, as far as outside painting is concerned, are the black panels on the sides, the signwriting on the back and the back doors. We can do all that in smaller chunks. The people have been lovely, the basin is really pretty and we’re definitely coming back in 4 years to do it all again. Only next time we’ll be a bit later in the year and hopefully a bit warmer.
at April 22, 2012

and it all looks very lovely. Well done everyone!