The recent lack of blog is in no way due to the lack of anything to write about, perish the thought. No, our failure to fill these pages at every opportunity is simply down a shortage of opportunities; for the last couple of weeks “Blog Content Deficiency” has been the least of our worries. “Not Freezing To Death” has been a lot higher up the scale.

For the last seven days we have been - or rather Legend, with us inside it, has been up in the air at the end of a slipway in a big shed. Because we were in a shed we haven’t been allowed to light the fire and, despite the very nice man lending us an electric heater, it’s been a tad cold up in our wind tunnel. When we haven’t been applying 30 litres of various ludicrously expensive coatings to the outside, we’ve spent the week inside either in bed, under a big duvet with all the blankets we own and a hot water bottle each, or on the settee under a big duvet with all the blankets etc. etc. 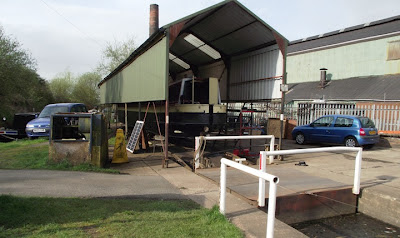 Our trip down here to Hawne Basin from Gas Street where we left you, dear reader, was quite eventful as well. It started easily enough; after a night surrounded by a hen party on 3 hire boats, we set off north-west along Mr Telford’s wide, straight navigation which, with embankments and cuttings, cuts a swathe from Gas Street to Tipton and 8 miles off the original line. The old line is still there – now in the form of several loops which disappear behind warehouses only to re-appear after a few hundred yards or so. After about a mile of wide & straight, the Soho Loop looked decidedly interesting so we turned right and followed Mr Brindly’s older contour navigation for a bit.

Luckily, the fishing match that we didn’t know was taking place all the way along the loop hadn’t started yet so, waving demurely, we drifted gently past about 100 happy souls and several thousand pounds worth of high tech lures, reels, spinners etc. and enough carbon fibre poles to make a new roof for Wembley Stadium.

Our next departure from the New Main Line was at the 3 Smethwick locks, where the old line climbs up and runs parallel with the new for a while. The first lock was empty so we went straight in. That was when we discovered that paddles on BCN locks need a water conservation key. This is a “T” shaped key that undoes a bolt allowing the winding gear to be used. 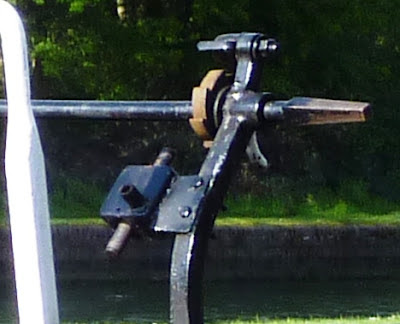 We didn’t have one. We pondered our options, raided our tool box, and considered various kitchen implements; all to no avail. We were just about to pull the boat back out and go back to the last winding hole we’d passed when we heard the distinctive sound of a boat coming down the lock above us. On hearing of our predicament they kindly lent us their key (to be honest, they didn’t have much choice- we were stuck in the lock they wanted to go into) and off we went. Let us just emphasise how fluky that was; we’d only seen one moving boat up till that moment, and we didn’t see another one till we stopped at the Black Country Living Museum moorings 4 hours later. If we’d been a few minutes later they’d have been through and gone; half an hour earlier we’d have pulled back and turned round before they got there. We know very well that our dear friend serendipity would desert us in a flash if we ever made the mistake of relying on her, but every time something like this happens it gets more tempting. Sooner or later we’re going to come unstuck, and won’t the page views go up then. Oh yes.

We stopped for lunch near the Engine Branch; a short cul-de-sac feeder arm that spans the New Line on a stunning aqueduct. 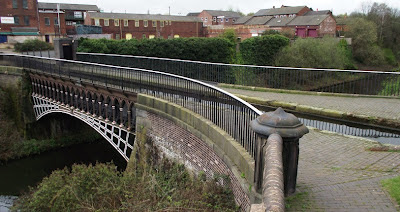 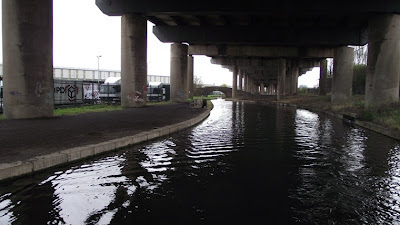 before crossing the New Line ourselves on another aqueduct, and finally turning left onto the Dudley No1 Canal which leads to the Dudley Tunnel and the Black Country Living Museum. 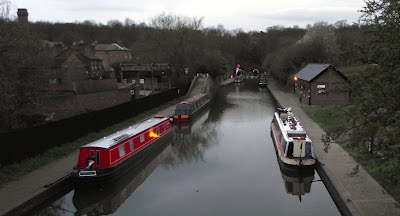 Because of the lack of ventilation, internal combustion engines are banned through Dudley. You can take a boat through though – you just need to leg it. That’s if you can get it low enough to fit. There’s a story of one crew putting a pond liner in their well deck and filling it with water. We’ll leave legging a boat over a mile underground to the hardened enthusiasts; we were down there to visit the museum, use the very nice BW amenities block and moor for a couple of nights before turning round and going through the much nicer, wider and better ventilated Netherton tunnel.

We would thoroughly recommend a visit to the BCLM. 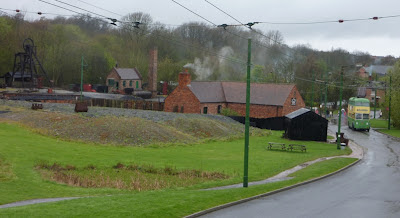 It is hugely interesting; it really brings home to you just how down-trodden working-class people were, how little they had, both in possessions and expectations and, in comparison, how vast and full our lives are today. The people who play the roles (it doesn’t seem right calling them actors) are really friendly and knowledgeable. Among lots of other fascinating stuff, we watched a nail-maker turning out perfect square-headed nails with just a few whacks of a big hammer, and a brass founder casting a new ring for one of the boats in a sand mould. Both of them talked all through the process and were happy to answer any questions we had.

After a couple of nights we turned round and did a 15 minute trip to Tipton where we stayed for a couple more. Before we went any further we needed a trip out in the car to a chandlery to put a Water Conservation Key on our key hook. So far we’ve not used it; we followed another boat down Factory Locks and they left all the paddles open for us.

Next came the big Netherton Tunnel - 10/10 for the headlight 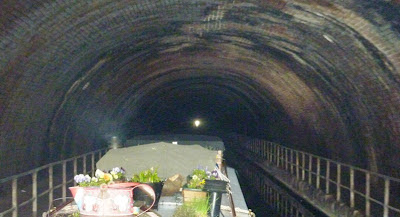 then south on the Dudley No2 Canal; a secluded, little used road to no-where. Or so you’d think, but it’s got a couple of surprises up its sleeve. One of them is the brilliantly named Gosty Hill tunnel. We’d heard that Gosty Hill was “a bit tight”, but, despite reading everything available about it, we couldn’t find any reference to its air draught. So for anyone who’s interested 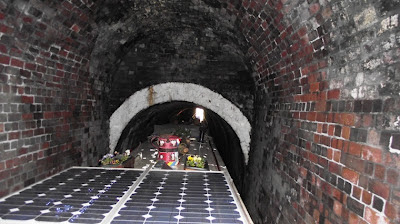 That’s low – not as low as Dudley, but low all the same. We’d taken the precaution of walking the towpath and we’d read the sign at the entrance, so our bikes were in the well deck, the big box was folded flat and the chimney was lying on the roof. The tricky thing is, if you don’t read the sign you go sailing in without a care because the entrance is a good 4m high. The stoopingly low bit comes at about 200m in. Then there’s a high bit in the middle, then another low bit, then the exit is as high as the entrance.


At the present end of navigation is Hawne Basin. Getting in involved a tight turn under a little red-brick bridge, followed by a very careful weave between all the moored boats to the slipway at the end. We turned up on Thursday afternoon ready for the big day on Friday. 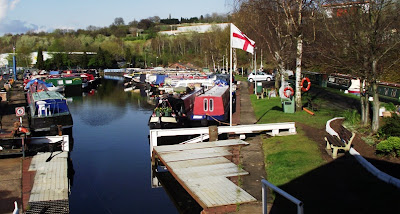