It’s been a week of mechanical ups and downs. This is Dave’s latest Heath Robinson affair. 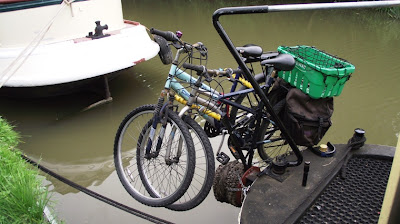 Last week we decided that having Legend’s diesel injectors serviced would be a good thing. It’s got a smoky exhaust and we wanted to see if we could improve things before we went through any tunnels. We phoned a couple of boatyards further up the canal and arranged for a bloke called Ray to come out to us and take them away to be looked at. As the Girls and Boys were coming boating on Sunday we thought it would be prudent to leave it till this week. Also on the agenda for this week was Ken’s MOT.

So after an exciting day’s boating in the wind on Sunday with Chloe, Shandy, Frankie and Harry as locking/pub testing crew, we moored up at Great Linford. Boating through Milton Keynes is highly enjoyable and a world away from driving through it. Apart from a couple of big concrete bridges there is very little to let you know that anything but Green and Pleasant is out there. Frankie & Harry went home in the evening but Chloe & Shandy stayed till Monday morning. We’ve now got removable curtains between the saloon, galley and bedroom so it’s easier to have folk stay over in the guest wing.

After they’d gone we phoned Ray to let him know where we were, and because he couldn’t get his van close to the boat, he suggested moving to Cosgrove where access is a lot easier. A quick look at the weather forecast told us that although it was fairly breezy, the afternoon was going to be worse, if we were going, then the sooner the better. There were a couple of hairy moments, the cross-wind on the aqueduct over the river Ouse was ferocious and despite his best efforts Dave was blown into the edge. Going sideways with 20 tonnes of boat when you’re 50’ in the air doesn’t half make your bum twitch. After Ray had been we cycled back to collect the vans, then huddled in and watched the weather forecast come true.

Ken’s MOT was on Tuesday. Because Karma was getting its own back for all the good stuff, his headlight lens fell out and smashed on Monday afternoon, so we knew he was going to fail. As well as the headlight they found a noisy, loose rear wheel bearing and a steering rack end joint that needs replacing. We came back and searched the web. Surprisingly the rack end was the easiest to find, the headlight wasn’t that much harder (despite being eye-wateringly expensive), and they’re both being delivered to Harry, who has generously agreed to help Dave fit them. The rear wheel bearing, on the other hand, was proving rather elusive. Because Ken is a coach built camper, Fiat supplied the cab but Swift fitted an Alko chassis to the back end. So you’d think the rear wheel bearings would be a Swift or Alko part. After half a dozen conflicting phone calls, and after both of us squirming about underneath Ken’s rear end with torches and mirrors looking for an axle part number, we were assured by Alko that the axle was a Fiat item and we needed to go the them for a bearing. So, back on the web. It turns out that In 1986 Fiat fitted 4 different wheel bearings to the Ducato, the only way of finding out which one you’ve got is to take the wheel and drum off and look at the number stamped on it. Dave trudged off with the tool-box only to return 20 minutes later with a big grin. There was no need to find a number or anything; they’re taper rollers, which mean they’re adjustable. Sorted! If the other bits turn up before the weekend we can book him in for a retest next week.

Ray came back on Wednesday, there was nothing wrong with the injectors, but once he’d re-fitted them and we’d started the engine it was decidedly less smoky than it had been before. It may be that it’s getting better all the time anyway as it’s now being used for propulsion rather than ticking over charging batteries, but it was good to know that someone who knows what they’re talking about has had a look at it and found nothing wrong. Dave learnt a lot from him while he was here as well. We’re off to Chesterfield on Saturday and the Crick Boat Show on Sunday. Jon and Jenny are coming to see us on Sunday evening, which we’re looking forward to, then next week we go up Stoke Bruerne locks and through the Blisworth tunnel.

This is Cosgrove, it's really lovelly here. 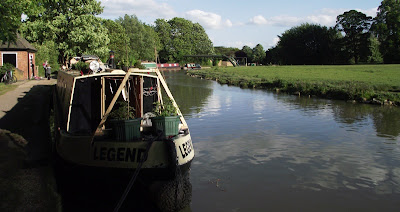