It’s all coming together now. We had a lovely afternoon with Anne on Saturday and came home with a sewing machine and a load of firewood. On Sunday, as promised we went to the boat show at Crick. 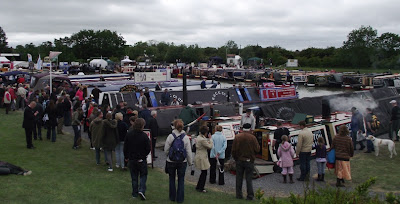 We were there two years ago; then we spent most of our time looking at all the lovely boats and dreaming. This time we were on a mission. We had done a power audit of all the 12V equipment on the boat and worked out our average current draw. Based on the UK average sunshine hours per year, plus our 6 or so hours boating a week, we’d calculated what size panels we’d need to (mostly) keep up with us. We’d also measured the new cratch board and plank, written down all the questions we needed to ask BW, knew what colour scheme we had in mind, and had a list of all the chandlery items Legend could do with.

After talking to as many serious looking solar salesmen as we could stomach, we sat down with our sandwiches and ruthlessly slashed through the realms of glossy paper we had somehow failed to avoid. In the end it wasn’t that difficult. Of all the solar companies at the show (and there were lots) only two actually took notice of our careful calculations and made any attempt to match our use. We went back to the one we felt happiest about and, pretty much in line with our original ideas, bought a pair of 80watt panels and a 20amp controller. We also got a pure sine-wave inverter, which means we can now watch DVDs on the laptop. We spent the rest of the afternoon collecting paint colour charts and then listened to a woman from Canal and River Rescue giving a lecture on Narrowboat Maintenance, which was very informative, but seemed to be all about what can go wrong with a modern, water-cooled, electronically controlled engine. At one stage she asked her audience if any of them knew where their manual engine stop was; Dave put his hand up and told her he didn’t have any other sort.

Jon, Jenny and Adam came to visit on Sunday evening, Jon has made this for us. 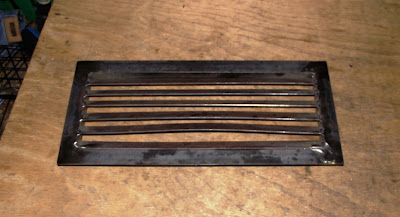 It’s to replace the very inferior, inadequate and not at all rain-proof one that is supposed to vent the engine room, but doesn’t. 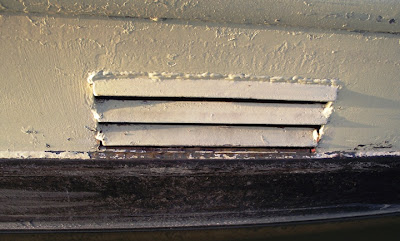 Dave is going to connect the new vent to the engine hot air duct with a new canvas cowling that we’re going to make from a piece of land rover tilt cover. Whoo-oo!


On Bank Holiday Monday, despite the drizzle, we decided we’d been at Cosgrove for quite long enough; we put the bikes on the back, pulled the pins and set off on the six mile lock-free section to Stoke Bruerne. The weather forecast had promised us it would clear up in the afternoon, but even pausing for an elongated lunch didn’t stop us getting thoroughly soaked. Ironically, at about 7pm it cleared up and it was a beautiful evening.

Tuesday dawned bright and sunny, so Dave set to work fitting the new panels. There is a good argument for having them loose on the roof – that way you can tilt them towards the sun. There is also a good argument for bolting them down – they might not be facing directly into the sun but they will still be there. After spending over £500 quid on them we opted for option 2. 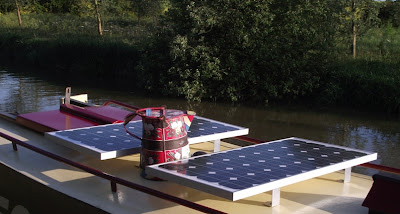 At the moment they’re held down with regular fastenings, but Dave’s got his eye on these.
Wiring the panels and the controller up was simplicity itself. The blue boxes are taking over the engine room a bit, but as far as power supply and management is concerned that’s about it.

It came as something of a surprise to find we’d gone through a bottle of gas in 2 ½ weeks. A quick dose of soapy water over the pipework in the front gas locker told us why. The easiest way to get to the leaky pipe was to climb down the hole. 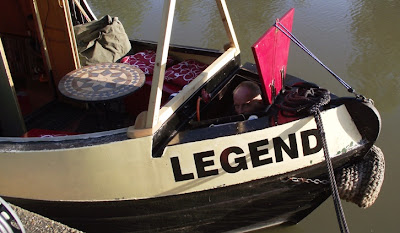 Six weeks of living aboard and we still have lists, but they’re not getting any longer.
at May 31, 2011