The Easter camp was fun, 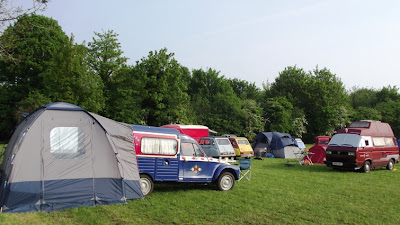 we got to see all our mates from 2CV land and we went back to our old house to see Pete & Michelle. It was lovely to find them so happy at No 3; they’ve got more chickens and ducks than we ever had, and they’ve got rabbits and 3 adorable pigs as well. It gave us a good feeling to know that someone else has taken what we started there, and is moving forward with it. It was good to see Jon & Jenny and Cathy - our former neighbours - as well. The little community in Gedney Broadgate lives on!

We went to the Easter camp in Poubelle on Good Friday; the plan was to go to a camping shop on the way and get 2 new sleeping bags, however we were 10 minutes late, so we spent the first night under our fleece blankets and Poubelle’s big curtain. On Saturday Chloe gave us a lift to Sutterton Camping where we found two very nice 300gsm bags with cotton linings and opposite zips. Perfect. To make it even better they couldn’t find the stuff bag for one of them, so they gave us a bag from something else and knocked £6 off. Just as well we were late at the other shop!

We caught up with the convoy from the camp site who were visiting a bakery. Nice! We bought some bedding plants for the boat from the shop next door, and then went to Stamford where Bourne Borderers were dancing and performing a “St George & the Dragon” mummers play in the town. 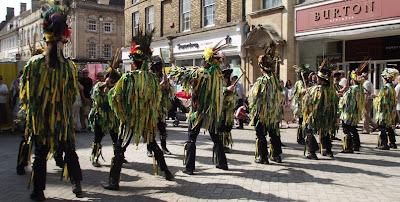 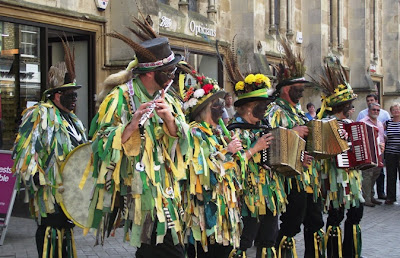 It was good to see all of them again as well. It’s appropriate that we’re in spring; the last couple of weeks have been a time of renewed friendships.

On Sunday, with Chloe following us, we came back to what is really starting to feel like home. After lunch Dave set up the work bench on the tow path and set to making a new plate cupboard. He had no sooner begun sawing when an ambulance pulled into the car park, quickly followed by two police cars and a fire engine, all with sirens and lights going. Then, as if that wasn’t enough, an air ambulance landed in the field behind us. Dave really is better at DIY than that! It turned out they were looking for someone who had threatened suicide and gone off down the towpath. Thankfully they found her safe and sound a little while later, but it was all very tense for a while with lots of talking into radios and a bridge full of spectators, no doubt waiting for someone to get dragged off with a blanket over their head.

On Monday Coops Co. came for a visit on their way home from the Easter camp. They parked their red Citroen H van behind Poubelle and Ken, making the car-park look fabulous. Dave & Coops huddled themselves away in the engine room, discussing volts and tool storage; there may be some sound deadening coming from that direction if we’re lucky.

On Wednesday we emptied Poubelle, drove her into Aylesbury, stuffed a bed settee in the back, 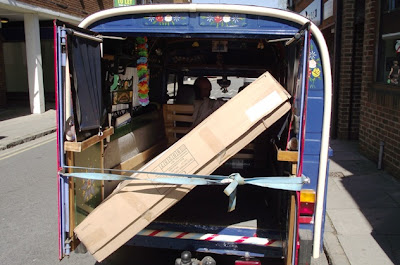 Feeling especially pleased with our planning and execution capabilities we removed the packaging only to find that we’d brought it in the wrong way round. 20 minutes later it was back in the right way round, had its legs attached and was looking fantastic and very red. 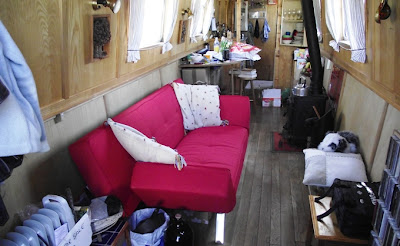 In afternoon we cycled the 6 miles along the towpath to Leighton Buzzard with our washing. While it was going round, Dave changed Ann-Marie’s inner tube for one without a thorn in it and we checked out the visitor moorings and services. They’re very convenient for the town and there’s a Jewsons right by the cut which will be very handy when we bring the boat.

First thing Friday morning we pulled the pins at Cook’s Wharf and headed up the GU. It’s a lovely spot but our 14 nights were up so on we went. We’re going to be moving again on Monday so we didn’t go far. We stopped in the pound between the Nags Head locks and listened to Wills and Kate making history on the radio. 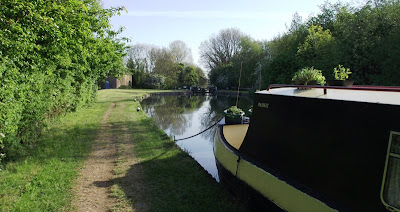 After lunch and after making sure we had enough slack in the ropes to allow for water level fluctuations in the pound, we walked back to the car-park and set off with all our camping gear in Poubelle heading for the Upton upon Severn Folk Festival. We were joining Bourne Borderers for a couple of days of Morris Dancing festivities. 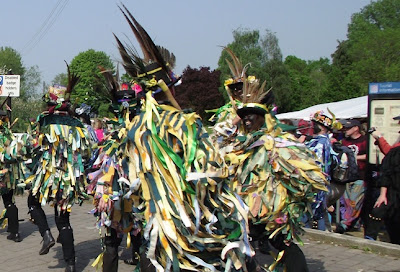 We came back on Sunday afternoon after the parade through the town. We parked Poubelle at Grove Church lock, at the end of a cul-de-sac by a bridge over the canal. 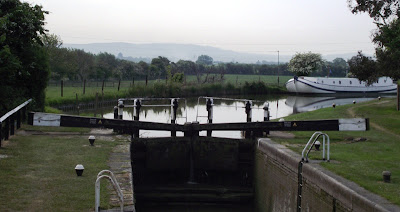 This is the spot we’d picked out for our next stop when we cycled into Leighton Buzzard. We walked back to Legend; it seemed a lot further than when we cycled it!
at May 08, 2011