After two days at Burscough we pulled the pins, moved up to the services by the bridge... 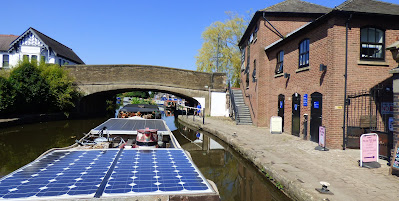 ...then carried on to Halsall and tied up outside the Saracen’s Head pub. Dave dug his way into the bottom of the wardrobe and began fitting the new Lithium battery. 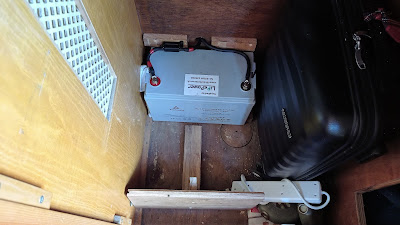 The cables needed to go through the bulkhead and under the engine room floor to the main battery bank, so there was quite a bit of upheaval. 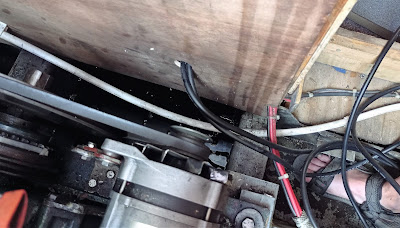 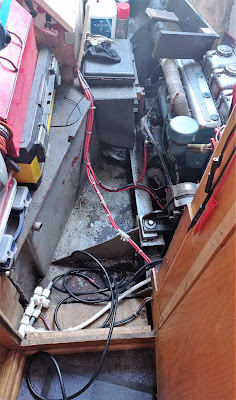 Maybe not as much as when the washing machine came in, but it’s a small, cramped space with lots of pointy things on the walls and Dave, although bendy for his age, is still only human. Ann-Marie – very wisely - went and sat out of earshot under a tree with her stitching for the afternoon then went back for the car.

The next morning, with the new battery connected and happily sucking up all the amps our alternator could throw at it, we moved down the cut in the sunshine to Haskayne. We remembered Haskayne from the last time we were up here in 2012, it’s nice and peaceful and there’s a really handy car park right next to the moorings. This time the tranquillity was somewhat shattered by the farmer on the opposite bank starting up a big old irrigation pump. We weren’t that bothered though because we were off on a grand day out. At that point the plan went something like this:- We were picking Frankie & Thibault up from Manchester airport and taking then to Jon’s for his 40th birthday weekend, Chloe and the kids would then be coming by train to see us on Sunday, before getting the train on to Liverpool airport and heading home. So, we wanted to reccé a good place to moor, near a train station, with car access. Maghull looked good on the map and on Google Earth, so off we went, leaving the dirty great V8 Briggs and Stratton roaring away on the other side of the canal, spraying our precious water over a huge field of leeks. Maghull turned out to be perfect, so we ticked that box then went on to Southport for the afternoon. The tide had not only gone out, but was completely missing altogether.

There was just miles of sand as far as the eye could see, but it’s still a lovely place to be... 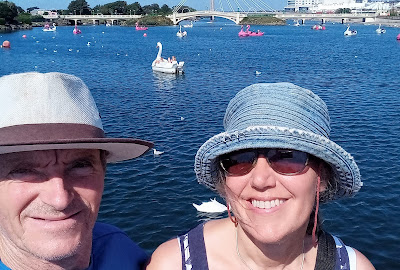 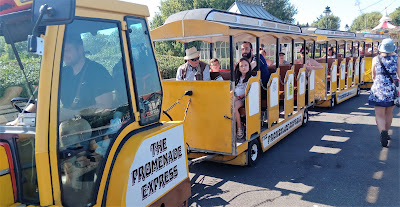 ...so very English Seaside. Back home Farmer Palmer had switched off Pumpy Mc Pumpface so we had a very serene evening paddle before bed. 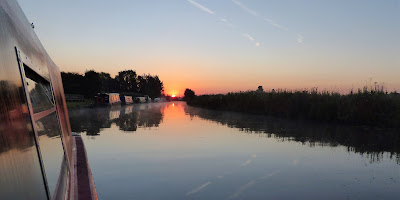 Friday was logistical masterpiece. We deflated the paddleboards and put them away then packed up the car and drove off to Manchester. First, we went to Ikea for coffee and a new bowl, then onto the airport to pick Frankie and Thibault up. We met up with Jon, who was picking Chloe, Caleb and Matilda up off a different plane and had brought Thibault's car seat for us. (Childrens’ car seats feature heavily in this episode, as you will see) Both planes were late, but Frankie's was delayed by 2 hours, so it gave us time for a mooch round Wythenshawe (a bit dubious, but Ann-Marie got a very nice hoody) before zipping into the 20 minute airport parking and being just in time to meet a very weary but excited Thibault and Frankie at the arrivals gate. We bundled them into the car and headed off to join everyone else in Matlock for Jon’s party. We had only intended to stay for the Friday night, but Jon & Jo very kindly invited us to stay for the whole weekend and included us in all the birthday shenanigans. It was a perfect party day in the garden, Granan had bought bubbles so the kids were in heaven with bubbles galore and mad splashing in the paddling pool. 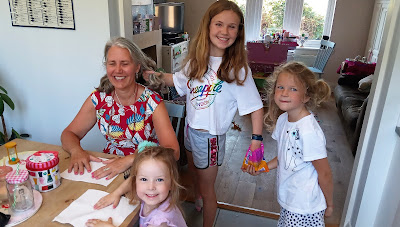 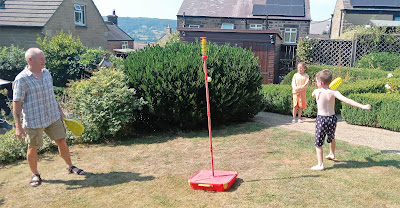 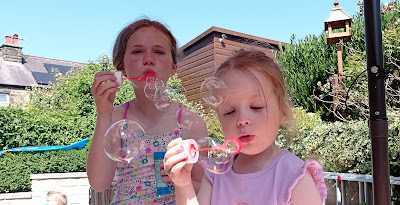 Jon spent the morning slow roasting a brisket on the BBQ... 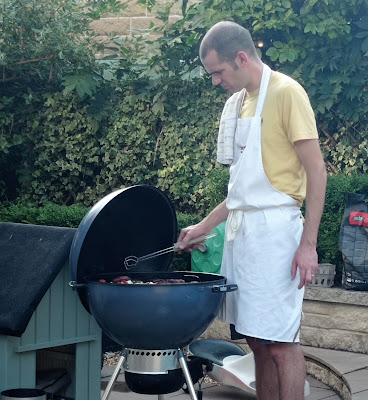 ...followed by all the usual nosh. A perfect summer garden party. 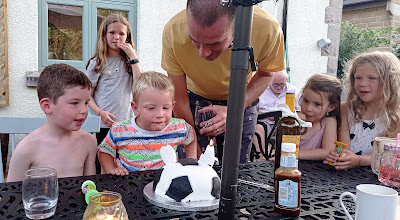 Because we were there till Sunday, it meant that we could bring Chloe and the kids back with us in the car, rather than them getting the train (which was virtually impossible on a Sunday), we just needed a couple of kids’ car seats. Jon’s gave us one of theirs that they didn’t use any more, and we went on FB marketplace and found another one going free just round the corner. Sorted. We set off after a big lunch for a hot drive back to the boat, which took us right into Dave’s nap time. Chloe relegated him to the back seat and did some of the driving. 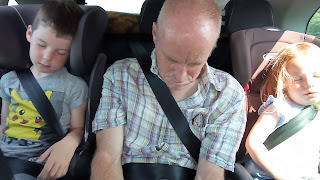 We dropped into an Asda and stood in the chiller aisle for a bit of respite from the heat, then picked up some stuff for tea and carried on, getting back to the boat with two very excited grandchildren. Matilda had never been to Legend before, but she’d been told all about it by Caleb who remembered it from his visit when we were on the K&A. He gave her a tour and told her all about boat life. Soo cute!

It was still very warm, so after dinner we had a walk down to the playground and picked blackberries on the way back.

The next day, after Chloe had a go on a paddleboard... 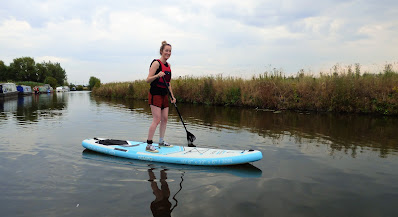 ...we took them for a short, but very excited boat trip to Scarisbrick. 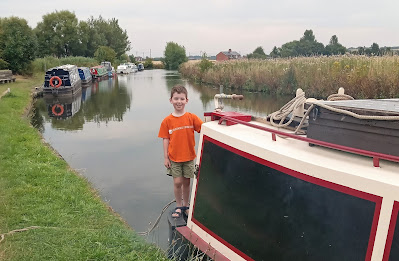 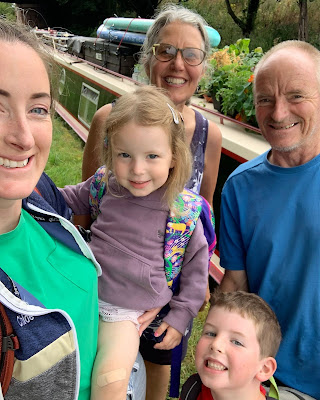 We had a sausage roll lunch in the café then a go with the Narrowboat Board Game, which Caleb loved, especially when Ann-Marie sunk her boat and had to go back to the beginning... 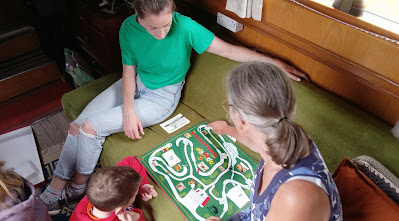 ...he thought that was hilarious!

Far too soon it was time to head off to the airport and drop them off. After lots of hugs and kisses in departures, we drove back to Legend for a lovely evening boating to Melling.

Over the next ten days or so we'll be on our way in and out of Liverpool and we'll not need the car, so we've left it tucked up safely in Haskayne, complete with two childs' car seats that we now don't need, have no room for, but are strangely reluctant to get rid of. Seeing them in the back of the car makes us feel warm and squishy inside. Silly old Nana and Grandpa.

It's been over 9 years since we came to Liverpool for the first time and CRT have changed the protocol for passage along the link through the docks. Last time we had to wait at Aintree for someone to come and open the mechanical bridges for us, then escort us all the way into the city. These days boats are less of a curiosity on the canal and the escorted passage has been deemed unnecessary. Both the mechanical bridges are boater operated, and we won’t see any CRT staff or volunteers until we get to the top of the Stanley lock flight at the end of the canal.

Liverpool has been our summer “destination” this year, and we’ve been looking forward to it for ages. There have been times when it looked like we wouldn’t get there, so to be on the last leg with no bad juju ahead was really good. We’ll tell you all about our trip and our week in the city next time.