Quite a few of our old 2cv club friends live around these parts so it has been a bit of a social whirl for us during our time here. As well as seeing Jim & Denise and Jean & Ian in Ilkeston, Steve & Les, who live in their motorhome at Holme Pierrepont, came to see us while we were on the cut. The last time they came to the boat we were on the Lancaster Canal, we a lovely time then and an equally lovely time at Cranfleet. They were very impressed with all the changes we’d made since they’d last seen the boat, especially the washing machine.

Graham & Dawn, some other 2cv club friends who moved onto a narrowboat from a motorhome just over a year ago (there’s a theme developing here), just happened to be in the area as well on their way to Sheffield via the Trent and the South Yorkshire Navigations. Their boat is called Countess Rose II and it’s very nice indeed. We wandered over to Sawley for coffee and had some of Graham's very good banana cake while they were moored there, then a couple of days later just happened to bump into them again at the bottom of the Erewash while we were out for a bike ride. It was so good to see how happy they were with boat life, but sadly all the banana cake had gone. They were going up to Langley Mill and back, then following us down the Trent towards Nottingham so no doubt our paths will cross again before long.

A couple of our windows had begun to drip water slightly when there was a lot of rain and wind. We’ve decided to make a proper job of it and take them all out and reseal them, and at the same time take them apart and reposition the glass in the frames. This needs doing because, over the 30 years that they’ve been in the boat, the panes have dropped so that they now cover the little holes that drain condensation from the inside. 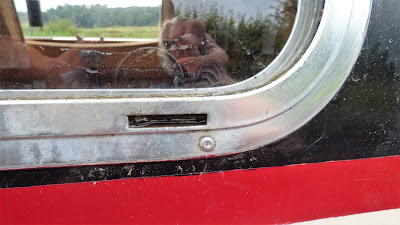 This means that the inside gutters end up full of manky green pond-life which is a royal pain to clean out. So that we could see how it all went together, while we were on the pontoon we took the glass out of one without removing the frame, then did some research into what we needed to do the job.

On the Cranfleet Cut, armed with double sided foam tape, sticky black mastic and a bag full of rivets Dave set to work. Drilling out the old rivets was relatively easy; a lot easier than trying to remove 30 year old screws anyway. Researching the job on the internet showed that there is some debate about whether screws or rivets are the most secure method of installing windows with exterior fixings (which includes most boats over 10 years old). However, in reality it’s a bit null and void when you’re talking about a window that spends most of its time at kicking height. If someone wants to get in for nefarious reasons, spending an hour removing the fixings and taking the frame out will not be their first option.

Cranfleet cut, with its high-ish bank was a good place to start the job. We got the hallway and dining room windows out on the left side... 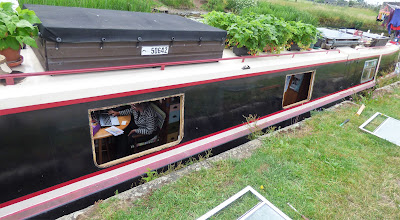 ...drilled all the fixing holes out to 5mm, then prepped and painted the steel round the cut-out. 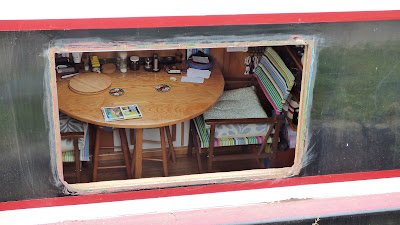 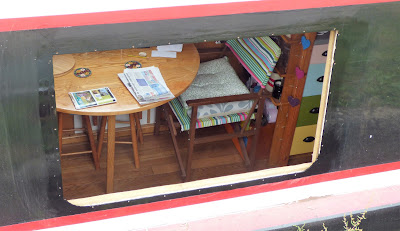 Turning our attention to the frames while the paint dried, we disassembled them and cleaned all the old crud off... 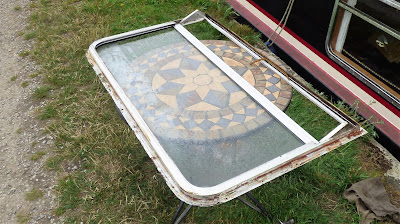 Remove the tiny screws and the top rail comes off.
DON'T LOSE THE SCREWS!! 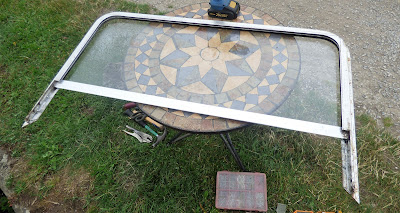 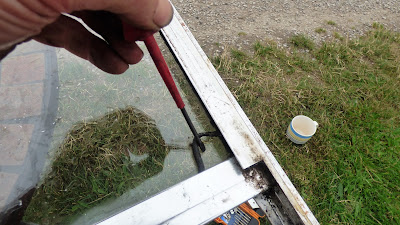 Taking out the rubber sealing bead 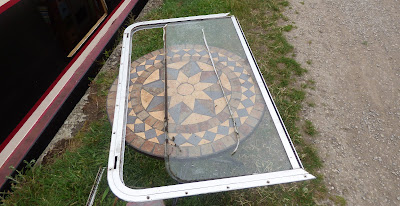 Sliding the glass out of the frame.
...before putting them back together with the addition of a little plastic block under the glass to keep it clear of the drain holes. When the paint was dry the frames got a bead of mastic and were riveted back in place.

There are still two windows to sort out on that side, but the bedroom ones got taken out and re-sealed while we were on the Basingstoke, so it’s just the glass that needs to come out of them. (And because they have secondary glazing they don’t suffer from condensation anywhere near as much, so that isn’t urgent.) The other lounge window on that side has been broken at some point in the past and the glass has been put back in with mastic rather than the 5mm rubber beading strip that it should have. It’ll take longer to get it out and clean it up, and we need to find some more beading so it’ll have to wait for now.

Bob and Mandy took us to the very opulent Harwick Hall (NT) for a lovely day out.... 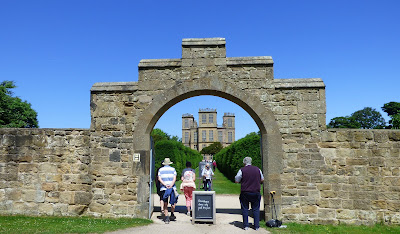 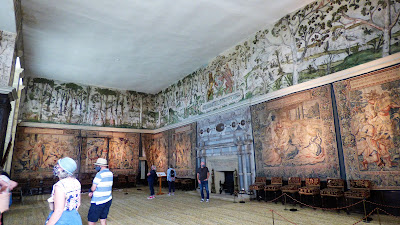 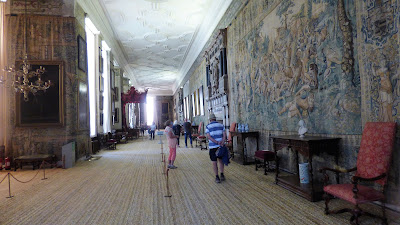 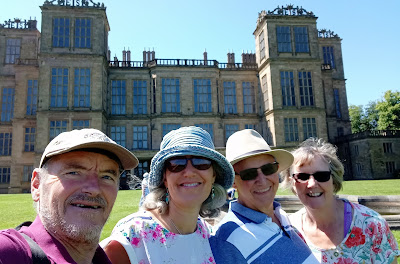 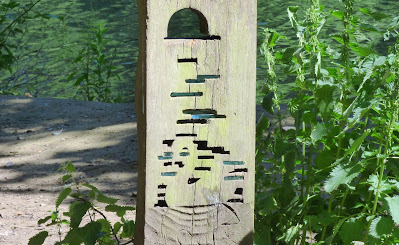 It took us a minute to see what this was. 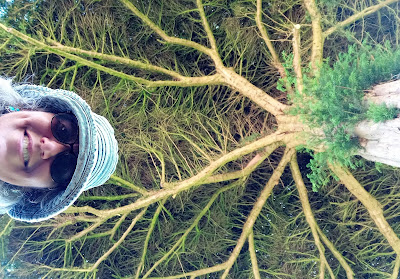 We had a picnic and icecreams, followed by a barbecue when we got back to the boats. It’s so nice to be travelling with friends!

The Trent has a huge catchment area, so it was no surprise that, after a couple of days of quite heavy rain in Staffordshire and Derbyshire, the river levels went up. The Cranfleet Cut is a lock channel and although there is no flow, all the time the flood lock at the beginning is open, the level goes up and down with the river. We marked a coping stone with a datum level next to the hatch and measured it twice a day. 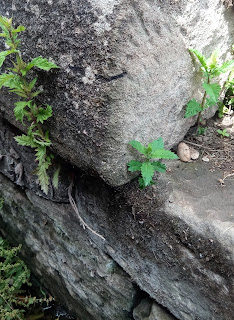 Within two days it had gone up 11.5 inches, but then started to fall back. Bob and Mandy were away for a couple of days so we kept an eye on their ropes as the levels changed.

We had a big (for us) cycle ride through Beeston and into Nottingham to check out the moorings. While we were there we locked the bikes up at the Station and walked up to the Old Market Square where we had our picnic lunch and watched the trams and the pigeons. We also took the car for a reccé further down the river at Holme Pierrepont, (only pay and display parking available) Gunthorpe (really lovely, pub, café, free parking, services, and a big 48hr pontoon) 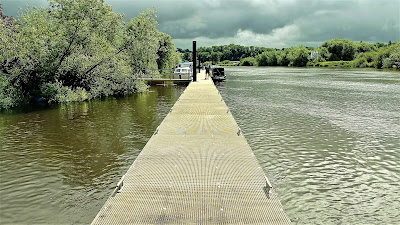 Unrestricted mooring at Gunthorpe Lock. Handy for services but high banks.
....and Stoke Bardolph (quite remote, but with a pub, parking and a landing stage with space for one boat)

On the way back we stopped at the Heritage centre café for a little something and were very impressed by it, and the amazing view of the weir from the tea garden. 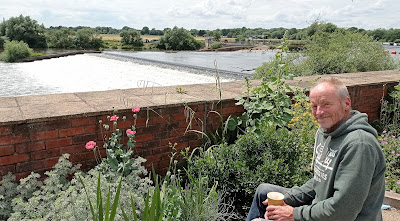 We promised ourselves that we’ll go back there with our mates.

Our roof garden is starting to look lovely now, the Nasturtiums are beginning to flower, the peas, beans, chard and lettuce are all doing well and we're getting a bowl of strawberries every morning. The cherry tomatoes that we've grown from last year's plant have just started to fruit; we've got ten plants, so in a month or so we'll be inundated! 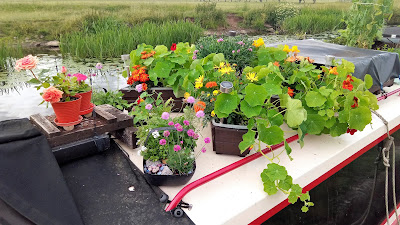 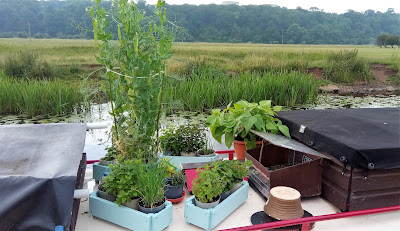 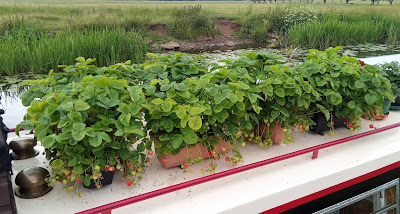 EVERYBODY mentions the strawberries! 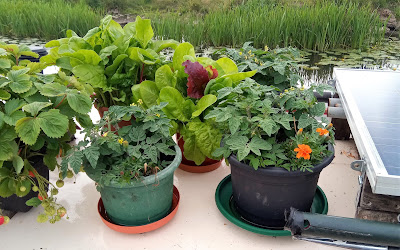 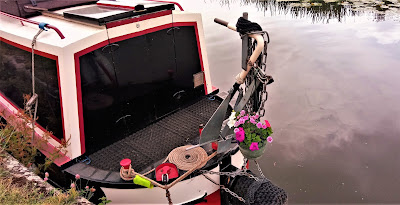 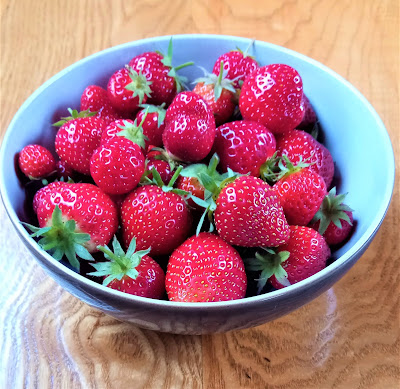 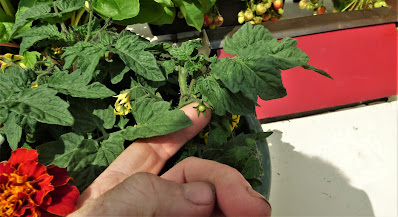 The first of many tomatoes!

Our last night on Cranfleet Cut was very quiet. We’re really enjoyed our time around Trent Lock, it’s been very nostalgic for Dave, really social and very calm and relaxing for both of us. We’re off down the river to Beeston tomorrow, it’s nice there as well - despite looking a bit Skeggy round the marina - but we’ve loved being here and we’re going to miss it.