After a stormy night we woke up on boating day to a clear blue autumn sky. We set off early because we weren’t sure that Legend would fit in the small winding hole at Minworth; it’s not marked on the map as a winding hole, mainly because it’s just a kink in the towpath, but we’d looked at it from different angles and we were sure we’d fit. If we didn’t we’d have to go all the way back to Star City in Birmingham before there was anywhere else wide enough, which would take all day. Luckily our calculations proved correct and we were soon on our way north again.

The wind was quite strong all day, but directly behind us, so not too difficult to cope with. 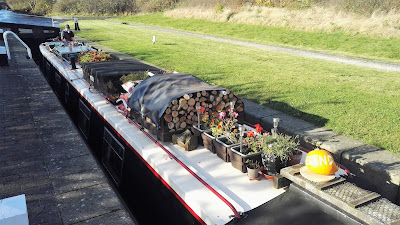 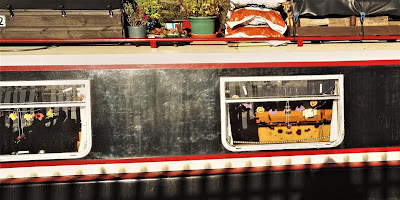 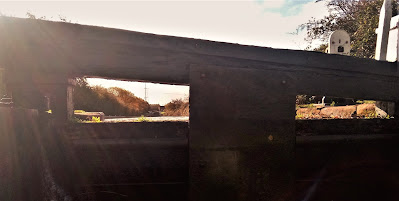 We filled up with water again just below the top Curdworth lock, then carried on down the flight to the hotel where we’d chosen to stay for the up-coming second lockdown. The canal was getting thick with leaves, making it impossible to go more than a hundred yards without having to go into reverse to clear the prop. Getting a wad of wet leaves stuck to the propeller can really slow you down and can be a worrying thing for new boaters. The boat goes all slow and juddery and you know there’s something wrong, so you pull over to check the prop, inevitably using reverse gear as you do. You open the weed hatch and the prop is clear, (all the leaves have either spun off in reverse or simply dropped off when you stopped) so you shut it back up and off you go. All is fine for another few minutes then it all goes slow and juddery again. After the third time this happens you get in a right panic with thoughts of broken gearboxes and failed stern tubes and you’re convinced the boat is going to sink, until you realise what’s really going on.

We call it the Minestrone Season.

We moored up just before the Marston Farm Hotel at Bodymoor Heath. Although being right outside on the mooring rings would have made easier access to the carpark, (which the hotel staff had kindly allowed us to use during lockdown) it was a bit shaded there and in November we need every photon of sunshine we can get.

CRT had suspended the Continuous Cruising requirements to move every 14 days for the duration of lockdown, and advised all boaters to only make essential journeys, so we took advantage of our extended stay and started on the engine rebuild. 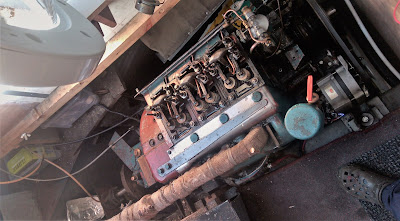 Our planned project included new pistons, piston rings and barrels. The SR3 is an air cooled engine and, just like an old fashioned motorbike; each barrel is separate and lifts off the block complete with its piston once the con-rod has been released from the crankshaft. 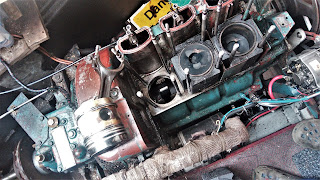 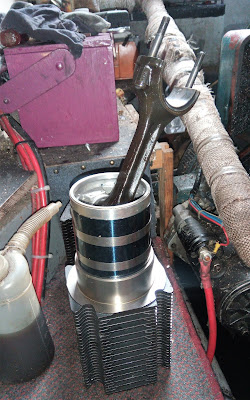 Unlike a conventional engine which would have to be lifted out of the boat to gain access to the crankshaft, Lister made the SR3 with marine installations in mind and included a removable side ‘door’ on the crank case. Although easier than craning the whole lump out and back in again, gaining access to the far side of the bottom half of the engine is still a pain, and involved some serious contortions on Dave’s part, especially as he was now working underneath the newly installed washing machine. When we put the washing machine in, we measured all the crucial gaps and access points and made sure that getting round the back was possible. And it is. However possible and comfortable are two different things, so it was fortunate that we weren’t in a hurry and Dave could go and tinker with it without any pressure. 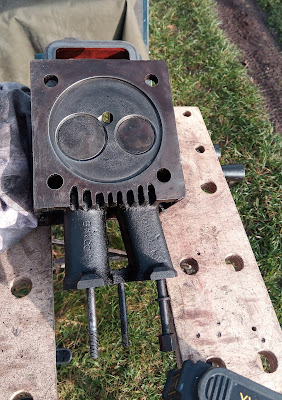 We filled the time in-between with wood collection and a few walks, and Ann-Marie made a sterling job of cleaning the roof which had become really grubby with leaf residue. She also made a Bonfire Cake to make up for us not having a WRG bonfire bash this year. 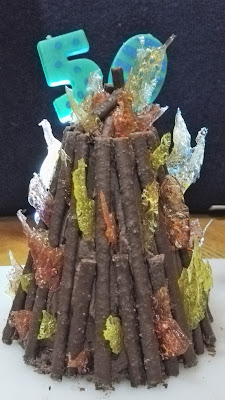 Talking of WRG, Nigel - one of our navvy mates who we last saw at Tewkesbury on his way round the Avon Ring - dropped by the boat one afternoon. His boat is currently at Glascote basin where he works, so he had a walk down to us for a socially distanced cup of tea and a slice of the bonfire cake. Virtual chats with friends and family are all very well, but it’s only when you spend a bit of real time with a real person that you realise how much you’ve missed it.

Back in the engine room, Dave got the new pistons and barrels installed... 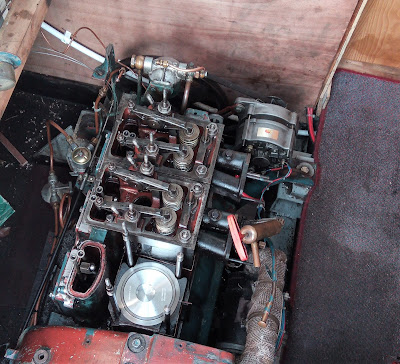 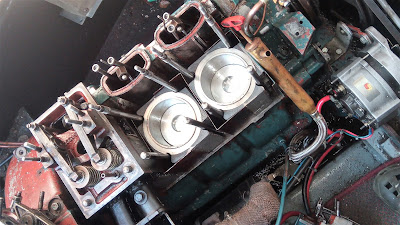 ...and finally figured out how to get round the oil pipes to get the con-rod nuts back on and torqued up. Once that was done he could seal up the crankcase door and never have to go back round there again. (Doubtful)

All that left was the little matter of adjusting the clearance between the cylinder heads and the pistons. This has to be very accurate; too little and the valves will hit the piston, too much and there won’t be enough compression to ignite the fuel. Measuring the gap is very old school. You place two small pieces of lead soldering wire on top of the piston... 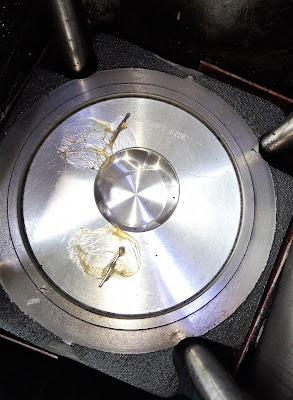 The grease is to keep them in place.
...replace the head and tighten it down, turn the engine through 360˚ so that the piston goes past top dead centre, squashing the lead wire against the cylinder head as it does so. 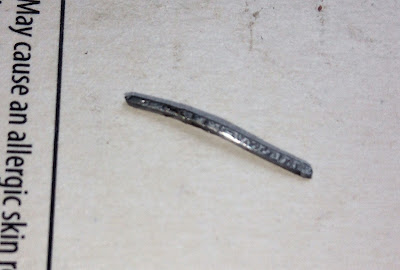 You then take the head off again and measure how thick the lead is with a micrometer. 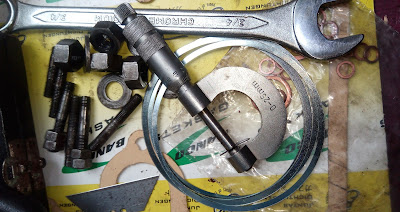 The gasket set includes a set of 0.01mm shims for placing under the cylinder head gasket should you need to adjust the gap. Dave carefully followed the procedure and all three were within tolerance with no need for any adjustment. However, when he came to tighten the head bolts for real with the inlet and exhaust manifold on, he discovered that the torque settings were 50ft/lb, which was quite a bit more than he’d done for the checks. Would that make the clearance too small? Possibly, but here was only one way to tell for certain, so it was lucky there was no rush. Two days later, at the correct torque setting, two of the heads needed a shim to bring them into tolerance, but the other one was fine.

Ten days after starting the strip down, and with quite a few days off in between, we finally finished the rebuild and restarted the engine for a test run. There was a bit of smoking, but nowhere near what it had been, and probably just oil from the rebuild burning off. It might be that we need to get the injectors reconditioned, but we’ll run the new stuff in first.

Outside of the engine room lockdown life has still been going on. Bonfire night came and went; Ann-Marie lovingly painted our bonfire bunting and hung it up in the windows, where no-one came past the boat to see it. The weather is getting more wintry, wet and windy with waves on the canal and mud everywhere. We’ve had a couple of walks round the beautiful Kingsbury Waterpark with its ever growing population of migratory water birds. 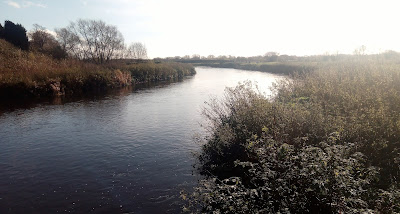 Also there’s a flock of Fieldfares round here which provide entertainment and one day we were delighted to see a Goldcrest, a first for us.

Now he’s out of the engine room, Dave has been getting in Ann-Marie’s way in the kitchen and has started making bread in an effort to minimise our trips to the shops. We’re also using dried milk powder instead of fresh and when we do go shopping we make sure we stock up on tinned stuff.

There are very few people walking past the boat. Unlike Wallingford where we were close to the town and nearly everyone took their allotted exercise on the Thames path, out here, away from anywhere big, we get the occasional dog walker and the odd fisherman, but that’s all. Apart from Nigel and half a dozen words with another boater, we’ve not talked to anyone in person since we got here. This winter is going to be tough for solo liveaboards; at least we’ve got each other.

The almost total lack of boat movement at the moment has resulted in the canal water becoming amazingly clear. Being able to see just how shallow the edges are in most places is a bit of an eye opener! There is truth in the saying that what you can’t see doesn’t worry you.

In order to restrict our boat movements as much as possible, we’re going to stay where we are until we run out of drinking water. When that happens we’ll go down the next two locks to the tap and then reverse back up one lock to the moorings outside the Dog and Doublet pub, where we’ll stay till this lockdown is all over, however long that may be.

We hope you’re staying safe and well in these troubled times Dear Reader, remember there is always light at the end of every tunnel.