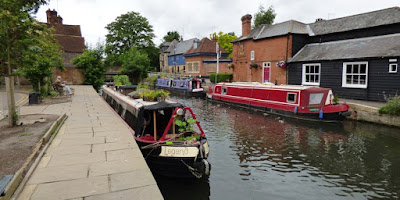 After just one night in Hertford we were off downstream again. Despite a small altercation with a totally unreasonable fisherman we had a lovely trip down to Ware. The problem seemed to stem from the fact that at Hertford lock there wasn’t a notice with “DO NOT BE AN IDIOT” in big red letters on it. 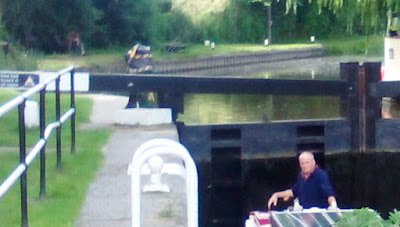 It's not the best photo, but you can see his rods on the lock landing, exactly where they were when we arrived. Numpty.

Just below Ware Lock the vegetation crew had taken down an Ash tree and put a pile of handy sized bits on the side of the towpath. Pulling in was a bit of a fiddle and meant grounding the front end then deploying the gang plank but we managed it ok. Once we’d got as much as we’d got room for Ann-Marie poled the front off and we backed out into the river – just as another boat came round the corner. Of course. The Ash is now happily seasoning ready for winter. 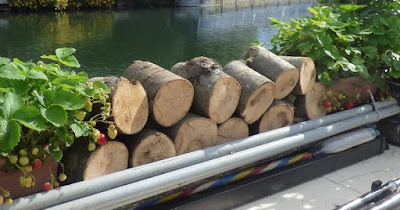 Our arrival in Ware happily coincided with the annual Ware River Festival. The moorings for the festival were above the town bridge, and by the Saturday morning they were four abreast. 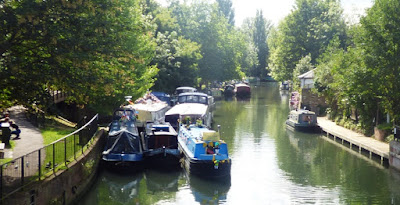 We were moored away from the action on the outskirts of town but still close enough to enjoy it all. 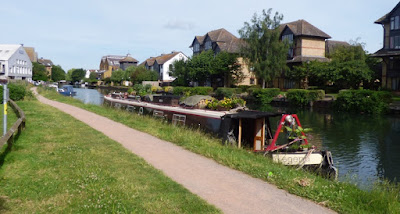 There was a parade of decorated boats on Saturday; they all came downstream to where we were moored before winding in every-which-way... 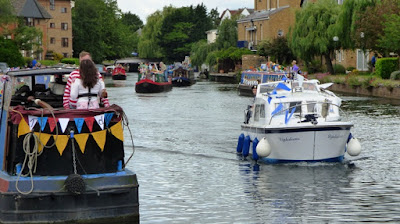 ...and then processing back through the town.

The theme was Roald Dahl so there were Jameses and peaches, several Willy Wonkas and more Umpalumpas than you could shake a snozcumber at. 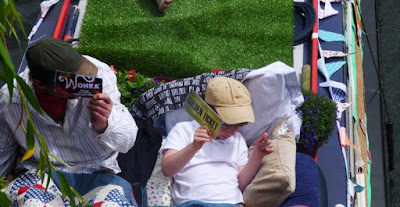 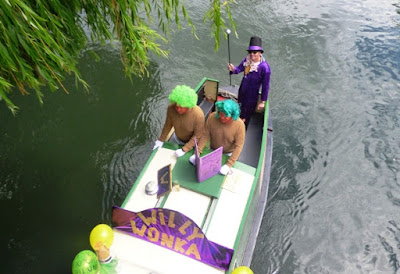 Ann-Marie had a few days away again, so Dave continued the wall and ceiling upgrade in the bathroom. As well as sanding and revarnishing, he built a little bathroom cupboard to replace the horrid shelf that everything falls off every time the boat moves. 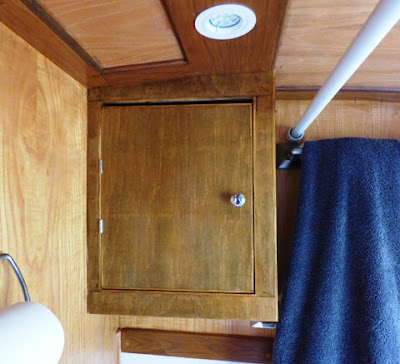 In the middle of all that, Dave’s phone lost the ability to read its sim card. Considering that its other attributes as a camera, a GPS locator and an internet portal were all covered by other devices, and in far superior ways, this lack of actually being a phone made it succinctly redundant.
With Ann-Marie back home again we carried on downstream... 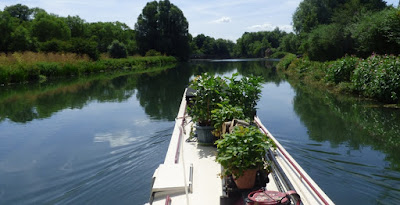 past the junction with the Stort, through Feild's Weir Lock and back to the new rings at Dobb’s Weir. 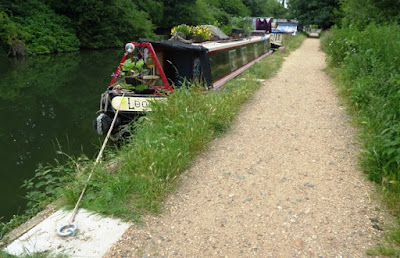 With its car park and reasonably secure location it has become our ‘go to’ mooring when we want to leave Legend for any length of time.

We’d decided to treat ourselves to a little holiday. Yes, we know our life is one big holiday, but as our fifteenth wedding anniversary was coming up we thought it was a good cause for a celebration. So, we swapped one waterway network for another and went off to Venice for four days.
We stayed in Mestre and caught the bus into Venice each day. We had one day walking around the entire city, one day on the islands of Murano, Burano and The Lido, one day riding the fabulous rockin’-all-over-the-place water busses, and on the last day we were back on foot in the alleyways, revisiting the canals, bridges, bars, plazzas and campos that we’d fallen in love with on day one.
There will be photos here shortly.

After a delayed red-eye back to Stanstead we returned to our little hardly-rockin’-at -all boat, both completely shattered at about 2am. We gave ourselves a day of doing absolutely nothing to get over it, then winded below the lock before heading back up to Feild's Lock where we finally turned across the top of the huge weir onto the Stort.

Commercial transport stopped on the Stort a long time before the Lee. That might have had something to do with the locks; at 13’6” they are considerably wider than a narrowboat, but not quite wide enough for two. 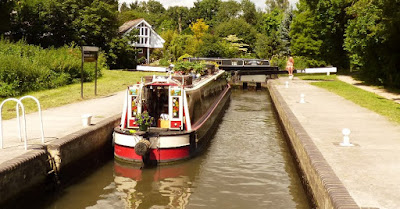 It is also has a much more rural feel to it after the Lee. 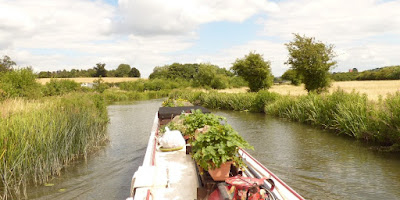 We stopped for lunch near the station at Roydon...

...then bought a yummy ice-cream at Hunsdon Mill which we ate on the way up to Parndon Mill.

The mooring we’d spied was already taken so we got as close to the bank as we could just after it and tied up with the gangplank out. 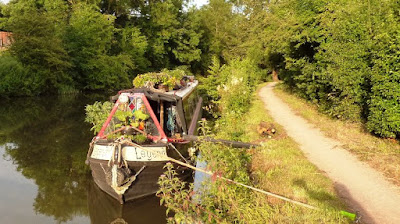 In the evening we walked back along the towpath to Dobb's Weir for the car.

The next morning Dave went for a walk up the river and found a very nice length of Armco just beyond the next bridge about 100yards away so, after breakfast we put the gangplank away and shuffled up a bit. 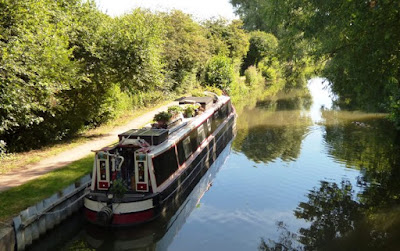 In the afternoon we had a run down to Karen’s for post and a prescription, then, very generously, Mum & Dad took us out for a meal to celebrate our anniversary. Karen & Andrew and Wendy came along as well and we had a terrific evening. As the weather forecast was rain free, we’d left the washing out when we set off. When we got back at 1am it was all quite dry but, rather weirdly, one of Ann-Marie’s bras was missing. We can only think of two scenarios; either it got caught on something and fell in the river, where it will lurk till it gets caught around someone’s prop, or it’s been nicked. We don’t know which of these is the most unsavoury.

After two weeks of silent running and almost perpetual research, Dave finally decided upon - and ordered – a new phone. On the same day Ann-Marie sorted out our car insurance and we had our first towpath barbeque of the year. 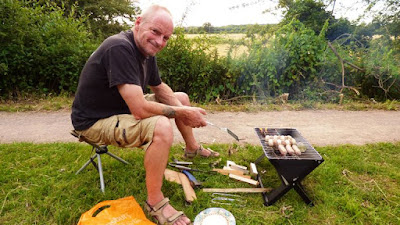 What a good day!

Since it stopped grinding corn, Parndon Mill has re-invented itself as a suite of studios which, once a year, hold an open weekend when the public are welcome to look around.

We just happened to pick that weekend to be there! How cool. There are potters, artists, jewellers, glass blowers, a blacksmith, an amazing guitar maker  and lots other highly skilled, creative people all happy to discuss their crafts and answer questions. We had a fantastic few hours there talking to them and being educated by them. 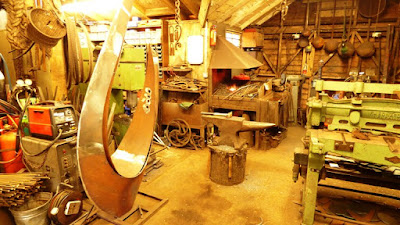 The blacksmith owns and has built the entire superstructure of this converted Dutch barge.

It’s not rusty from neglect,  but a trick employed by boat builders of old. Because it’s going to be grit blasted before painting it’s been left unprotected as rust is a lot easier to blast off than the mill scale that coats new steel.

The next day was a scorcher. We had planned to pootle up the river and stop at Harlow Mill, but when we got there the moorings were full, so we carried on to Sheering Mill, near Sawbridgeworth, the next place that looked like it might have car access. This turned out to be correct. Despite having Legend’s back end hanging out in the river... 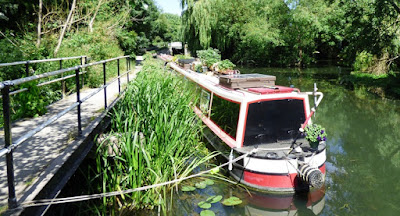 ...the moorings were very pleasant with good solar and a handy carpark. 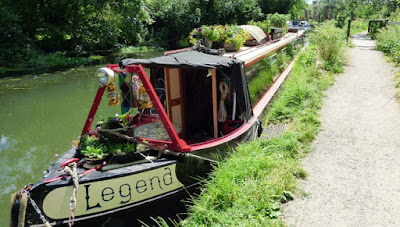 Sawbridgeworth itself proved to be a lovely little town with a splendid church and a local shop that was doing half price Magnums. What’s not to like?

Diane came to see us the following morning. In readiness for her arrival Ann-Marie made sausage rolls and scones and as it was another blisteringly hot day we, along with a couple of huge carp, sat around doing very little all day apart from eating. 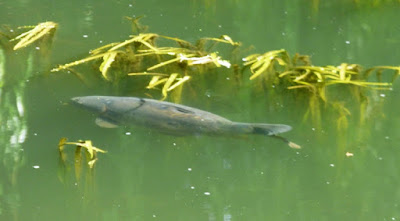 We certainly seemed to have brought the glorious weather back from Italy with us as one hot sunny day followed another. Thankfully, on the Wednesday morning there was a bit of a breeze, so we were able to walk up to Bishop’s Stortford to have a look at the moorings and pick up Dave’s new phone which Amazon, at our request, had delivered to the post office there. Despite spending the hottest part of the day in Wetherspoons downloading apps, it was still roasting on the way back. That evening we had a candlelit dinner in the well deck listening to our music.

During the summer we've got used to travelling with our tallest plants in the well deck... 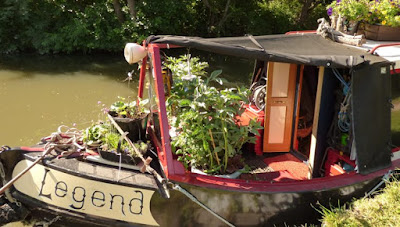 ...in the belief that everything else would be ok, but at Spellbrook lock we came to the lowest bridge on the Southern Waterways and it was a bit of a scrape going through.

The visitor moorings at Bishops Stortford were better than we’d expected. 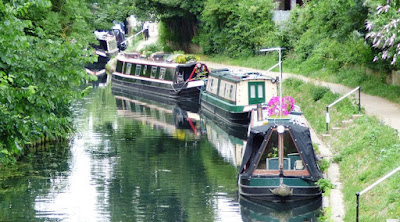 They weren’t the prettiest in the world and they were right in the middle of the town making them a bit noisy, but there were good rings, easy access and it felt safe enough, so we decided to go and have a week there anyway. (We need to be away from Sawbridgeworth for a while so we can go back and leave Legend there, while we go off in the car for five days to see all our mates, without overstaying.)
There were lots of useful shops in Stortford. Always a danger as we find ourselves drawn to supermarkets in the early evening.

In order to complete a plan that’s been hatching for a while, we got a new hosepipe for drinking water and demoted our old one to plant watering via the auxiliary bilge pump. 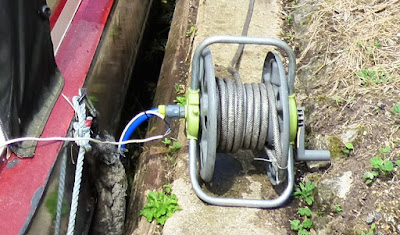 That works very well, as we’d hoped it would, and saves numerous trips down the gunnels lugging the watering can. 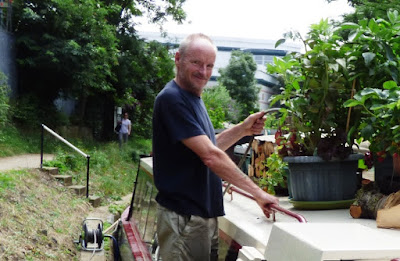 Fortunately (for us anyway) we managed to arrive at Waitrose just as they were in the middle of a crisis due to a complete refrigeration failure. The staff were frantically clearing the shelves of most of the perishables, but there was just no room in the back for the prepared sandwiches so they were giving them away. Oh dear, how sad.

Since we came back from Venice we’ve both had really nasty summer colds, first Dave, and then just as he was getting better and we thought she’d got away with it, Ann-Marie came down.
Hopefully, by next weekend when we set off in the car on our grand tour, we’ll both be as fit as fleas again.
Here's some pretty pictures of Hertfordshire and Essex. 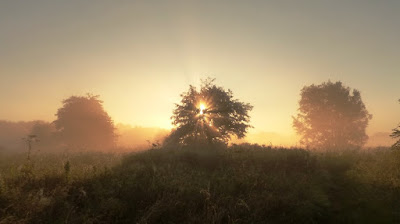 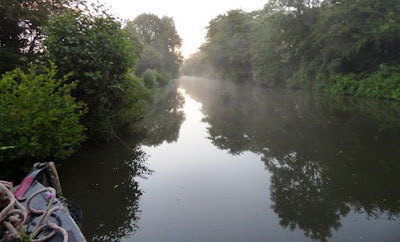 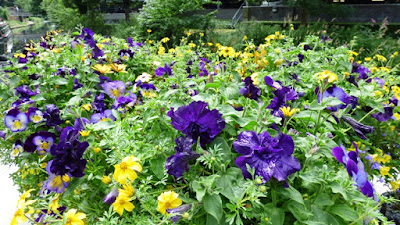