Hermatage Lock at Earith is one of the two manned locks on the Ouse, the other being at Denver. This is because both are tidal. ‘Surely,’ we hear you cry, ‘the lock at Denver marks the join between the river and the sea. How can it be that there is another tidal lock half way to Bedford?’ Well, it’s because there is a 20 mile short cut that runs in a straight line along the New Bedford River from Earith to Denver bypassing Ely and all the twists and turns of the Ouse.

The entrance to this is just above Hermatage lock... 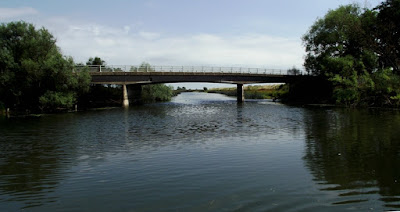 making the short section between there and the next lock tidal, although the rise and fall so far inland is barely noticeable. 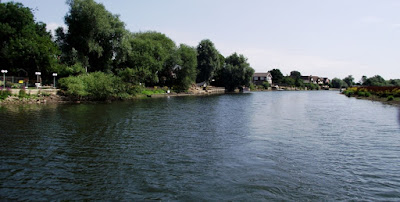 A short distance upstream is the sluice which forms the beginning of the Old Bedford River.

This was part of our old friend Cornelius Vermuyden’s grand plan; flood water from further up the catchment area was quickly drained out to sea without having the opportunity to spread out across the low lying fens. The New Bedford is navigable; you go the full length of it in one go with the tide. If you’re in a hurry it can take days off the journey and save quite a bit of diesel in the process.

What had excited us most about this section was the fact that there were reports of seals being spotted on the riverbank and we hoped to be lucky enough to see one.
As it turned out we reckon you’d have to be very unlucky not to. We moored up on the EA mooring outside Westview Marina and spent the day on seal lookout but didn’t see the mother and baby who were basking within yards of the boat until we went out for a walk. 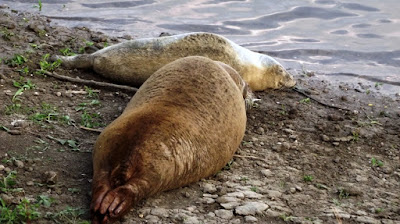 When we came back they’d gone from their sandy beach and we thought we’d seen the last of them, but as we walked along the pontoon by the boat they swam out from underneath it!
In the morning Ann-Marie was woken up by a seal clearing its nostrils right outside the hatch...

A photo of where a seal was just now.

...then on our way to Brownshill Lock we saw another one dozing on another sunny bit of river bank.

Flipping things are all over the place. (See what we did there? Flipping? Seal? Geddit? This stuff is priceless!)

We pulled into one of the three GOBA moorings just upstream from the Pike & Eel. 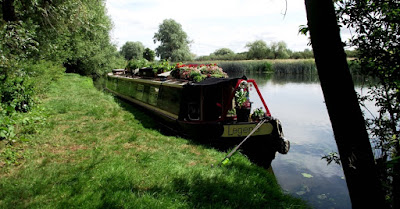 There’s a little pathway from there into the marina, which meant we could walk back up the Ouse Valley Way to Earith for the car on the first day.. 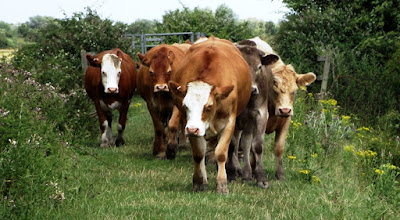 Come and have a go if you think you're hard enough!

...and cycle into St Ives for a few essential supplies on the second. We came home with the paniers bulging with two dozen yellow labelled pears!

The following morning some contractors came along and strimmed the bank round the boat. We didn’t realize until we went to set off that they’d disturbed a wasp’s nest right behind us. Dave reversed Legend on the rear pin to bring the front out from the bank, then got off to pull the pin out. By this time the wasps had been strimmed, smoked and shaken, and they’d had enough. Dave got stung a couple of times behind his knee. It was very painful and he looked a bit unwell for a while, but the sun came out, and as we passed Holywell with it's lovely village green and public mooring, and he started to feel better.

By the time we come back the local council will have finished repairing these moorings. 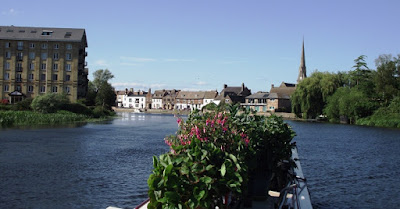 As we were going into St Ives lock we met a man in a tupperware boat. He only had one wife. He wasn’t wearing a shirt and he looked as if he’d eaten all the other six wives, and their cats. The remaining wife was more hindrance than help and between them they made a complete hash of getting into the lock with us, after which she refused to make eye contact, or even acknowledge our existence, so we won’t be writing any poems about them. 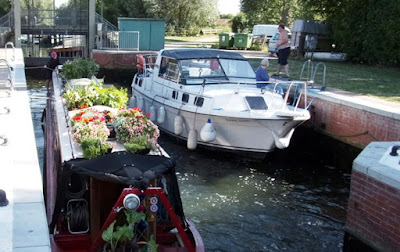 We idled all the way through St Ives looking for somewhere to moor, then turned round, went back to the beginning and pulled up on Town Quay.

It felt a bit odd to be moored there as the quayside was level with the boat roof, as were the benches all along it. We spent a strange afternoon chatting to the people of St Ives and those on holiday, all the while looking up and shading our eyes. By tea time we both had neck ache. In the evening we watched the sun set over the very impressive bridge... 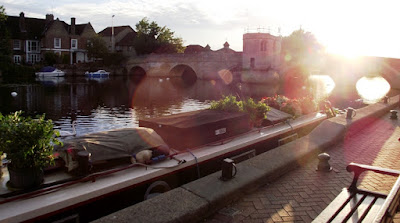 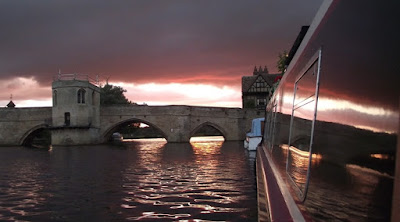 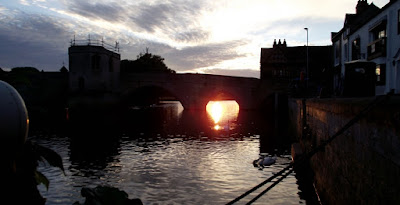 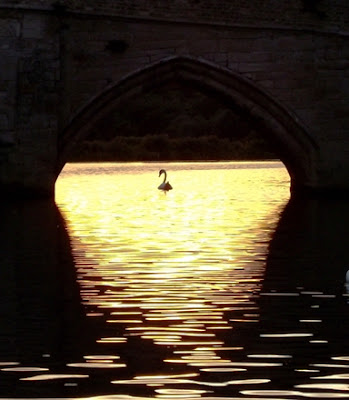 ...and went to sleep listening to a not-too-shabby covers band in the local pub.


We had two days in St Ives, although due to the dull weather, apart from a quick dash to the market and the library, the second one was mostly spent inside doing crafty hobbies. 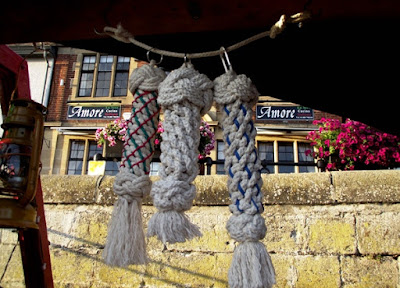 We moved the car to Godmanchester, (pronounced God-man-chest-er. Surprisingly) via Tesco, then cycled back with most of the shopping. We couldn’t fit it all in the panniers, due to an unexpected haul of unusual fish, so all the non-perishables remained in the car boot. On the way back we came across two heavily overloaded plum trees and our first blackberries of the year, which cheered us up no end, but made cycling somewhat challenging.

Back at the boat it was becoming rather windy. If we’d been on a canal we’d have stayed put in such conditions, but river folk are made of sterner stuff! Off we went to Hemingford. The very pretty public wharf was just at the right height to get our gunnels wedged underneath, so after faffing about with various fender options for half an hour we moved up to join the cows and the ancient willow trees on the GOBA moorings in the next field.

In the evening we walked around the beautiful Hemingford Abbots and found some more plums. 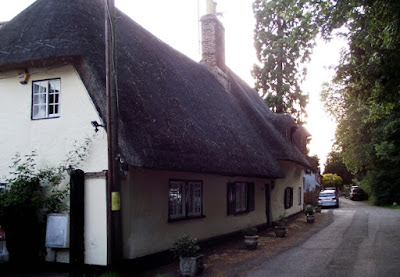 How delightful!
It was only when we’d moored up and wandered as far as we could in either direction that we realised that the mooring and the mill were not on the same island. Not only that, but the only way off our island was by boat.
We briefly considered blowing up the dinghy and paddling across, but then it occurred to us that if our dinghy got nicked while we were looking round the mill we wouldn’t be able to get back to our boat. And by the time we’d got it out and inflated it the mill, or more importantly the tea-rooms, would have been shut. So we put it off till the following day.

The following day we were moored in Huntingdon on the Rotary Club moorings.

We cycled back to Houghton Mill, passing some fantastic cherry trees...

...only to discover that it was shut. We will persevere. On our way back down stream we’ll have another go. Although we quite expect to find it cordoned off due to the plague.

On our second evening in Huntingdon, after it had been raining for most of the day, Anne dropped in on her way past for tea. It’s always lovely to see her and catch up on her news.

Nasty experiences are few and far between on the water, but occasionally they do happen. That night one of them did. At about 3am we were woken by a loud bang, followed by running footsteps. We looked out to see 6 lads running away from the boats. There was another bang as something was thrown at the side of the boat so we phoned the police. By the time we’d got a crime number and given a very vague description, (“Six lads...late teens...early 20s...sorry, it was dark.”) they’d run off. We went outside to check for damage. Apart from two muddy splat marks... 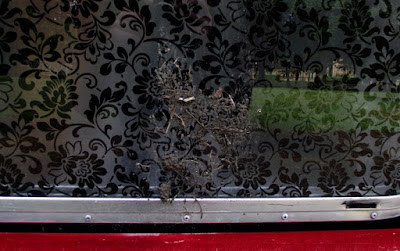 ...everything appeared to be ok, all the roof-tat and the flowers were still in place but the boat in front of us had had its mooring lines let off and they were busy tying it back up again. The fella said it wasn’t an uncommon occurrence around these parts. We think they’d tried to do the same to ours, but because of the way we tie up they couldn’t, so they’d chucked mud at us instead. We were cheered by the thought that not only were the young men in question soaked from roaming the streets in the early hours in the rain, they were now also muddy. Hopefully they’ll get pneumonia.

First thing in the morning we got the Hell out of Dodge. Under the Town Bridge then under the big A14 viaduct. 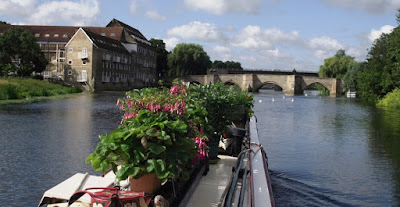 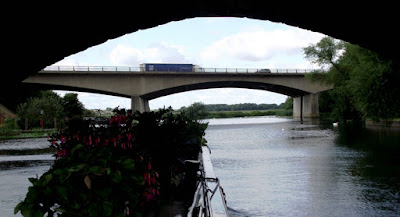 It’s a shame because Huntingdon isn’t a bad place, it was one little incident and no real harm was done. But we know we won’t even consider stopping there on the way back.

Godmanchester however, despite only being separated from Huntingdon by the ever present elevated A14, was a completely different kettle of fish. We moored on the dead-end arm between the lock and the Chinese Bridge at the side of the park. It was a lovely place to be with a constant stream of people walking by, all very complimentary and chatty. Just in front of us was the landing stage for a little ferryboat that did very reasonable trips up and down the river and the park was full of people having picnics and enjoying the sunshine.

After transferring the rest of the shopping into the boat we moved the car to Offord and walked back along the Ouse Valley Way, stopping briefly at the golf course for a spot of cherry scrumping.


That night there were more bangs outside the boat, however this time they were some rather spectacular fireworks from the other side of the park. Godmanchester is somewhere we will be stopping on the way back. 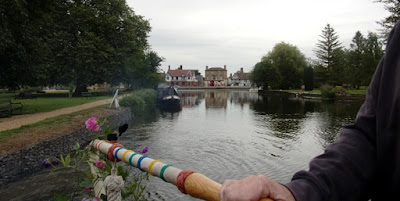 still loving your adventures and great photos, can you recommend any other similar blogs?