September 2014 will be remembered for the seemingly endless succession of parties, all of which were tremendous fun, full of our most favourite people and made us feel all loved up and special. They were also all miles away, but no matter, we would have gone wherever they were.
First there was the Bourne Borderers reunion. Everyone who had been involved with the best Border Morris side in the country since it started 22 years ago, including us, had been invited for a day of meeting old friends, chatting and dancing. After a practice session at Edenham village hall in the morning where we ate copious amounts of cake and learnt four dances in quick succession, 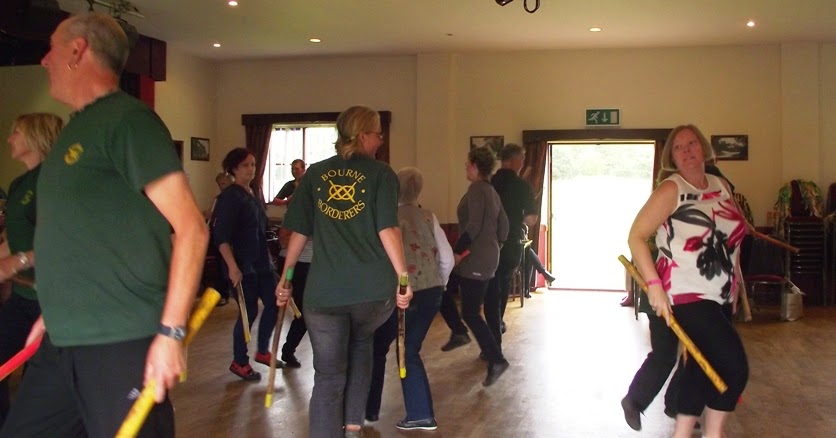 we upped sticks (quite literally!) to the Wishing Well Inn in Dyke to perform them. 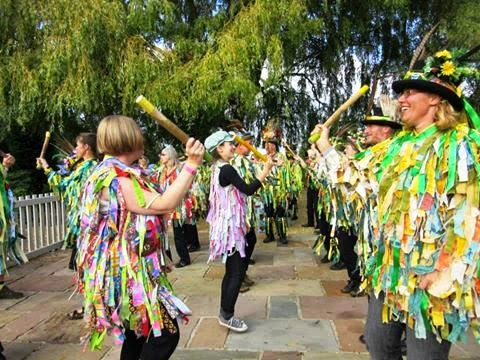 The afternoon was spent back in the hall with more cake, more dancing and more chatting with new and old friends. Later on, just when we thought we couldn’t eat another thing, dinner was dished up, and we found that - if we tried really hard - we could.

Our very good friends Andrew and Karen generously provided accommodation for us so we spent a brilliant evening in their company, along with several other side members, most of who turned up with various musical instruments. Tiddly Pom, here we go, there we go.

In the morning we went to Bateman’s brewery where Frankie and Harry got married. This was because Dawn was celebrating her birthday in the camping field and a bunch of our old 2cv mates were there to help her along. As we were passing… We stopped to give Dawn her prezzie, had a carvery with Wiltz and Annie, had a chat, sat round a brazier in the sunshine; all the usual stuff.

On the way home, just before we got back to Legend, we stopped on the road to pick up a sizable piece of Ash that we’d noticed a couple of days previously while out walking. We’re not lighting the fire yet, but we weren’t leaving that behind.

During the week we were in the car almost as much as the boat. As well as a run up to Anne’s for post, we went down to Mum and Dad’s in Fleet. We picked Lauren up and we all went out for lunch, and then dropped Lauren off at Wendy’s before coming home again. It’s good to be far enough south so that we can get down to Hampshire and back in a day.

The next weekend we were back in the east for Tony and Jan’s anniversary horkey. A horkey is a party where the guests provide the entertainment and as Tony and Jan are the backbone of Pig Dike Molly, who Ann-Marie used to dance with, the guests were more than happy to oblige. There were songs, poems, musical recitals, ceilidh dances and more. Dave performed his self-penned spoonerised version of Cinderella – Rindercella and her su tuggly isters –  always popular, always a hit. He keeps saying he’s not doing it anymore, but as soon as he stands up and the audience hushes his alter-ego “The Tory Seller” takes over and it’s show time. 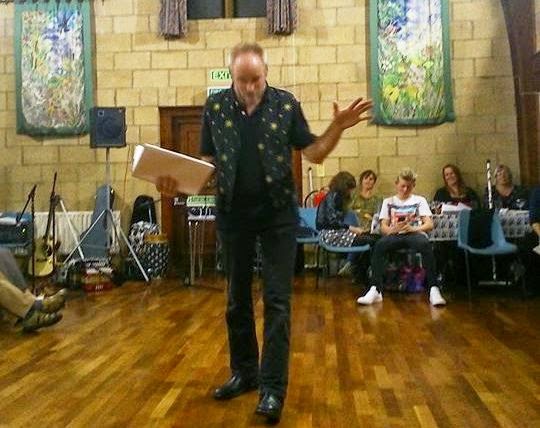 “Thank you, you’ve been great, I’m here till Thursday. There’s still tickets left for the meat raffle from Maureen behind the bar, Goodnight, enjoy the scampi.”

It goes without saying that there was enough food to supply a troop ship. Even after multiple return trips to the buffet we still came home with more than we took and found ourselves eating hastily assembled broccoli and tofu sandwiches on a nocturnal blast along the A47. At some ungodly hour we finally got back to Snarestone and our little boat, tired - as Enid Blyton would say - but happy.

Our activities during that week included picking a bucket full of rose hips, hawthorn berries, elderberries, blackberries and sloes and then turning them all into hedgerow jelly while moving the boat to Market Bosworth, 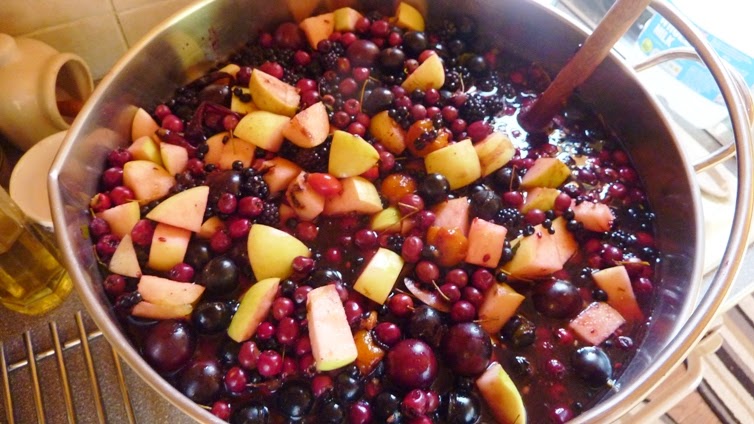 where Kim came for the afternoon with Baby George. 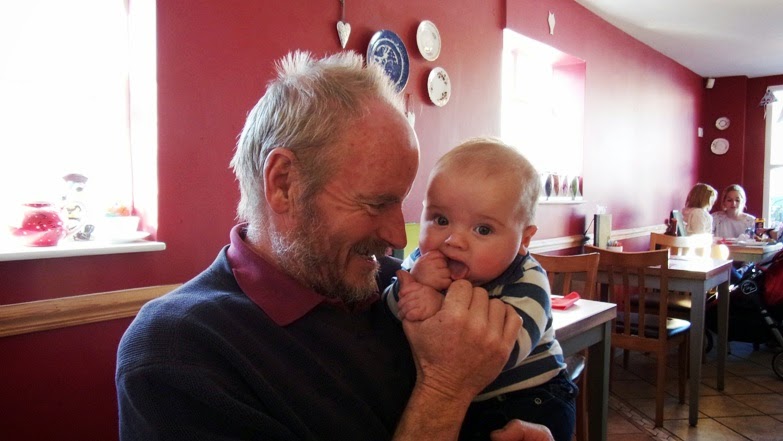 We also went for a lovely walk following the Leicestershire Round and the Ivanhoe Way and boated to a terrific mooring on the off-side just after the Shenton aqueduct, right next to a row of sloe bushes and a wild apple tree. 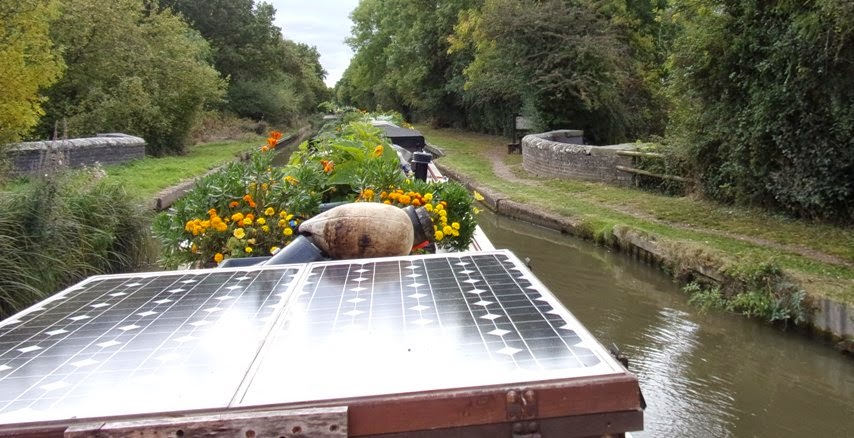 Another week and another trip eastward for another reunion. This one was for the SpaLding APpellation DAnce SHow, aka Slapdash; Ann-Marie’s Tuesday night dancing club. 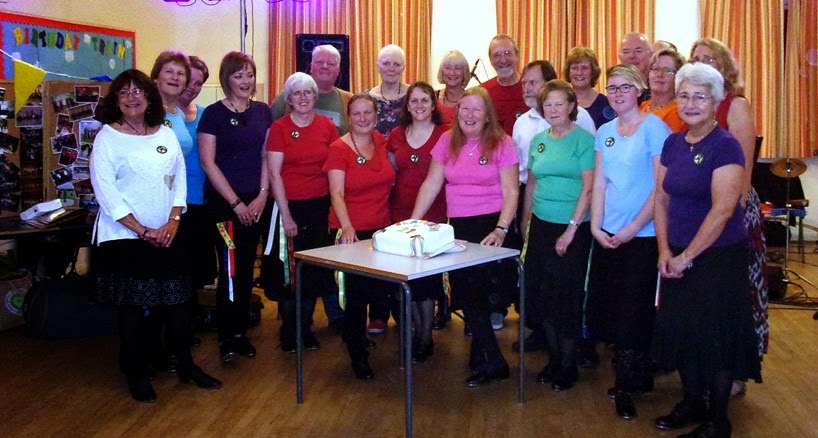 There were more ceilidh dances, more friends, more food, as well as some performances of appellation dance, two of which featured a rather surprised Ann-Marie in borrowed shoes. 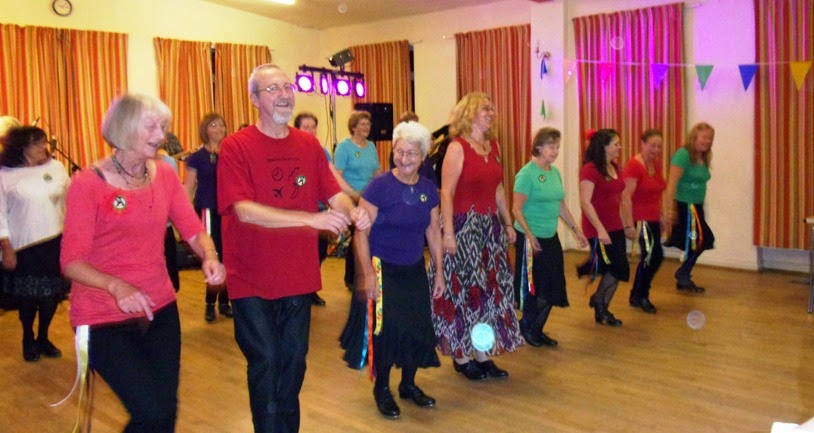 Despite several invitations to stop over we elected, one again, to attack the A47 armed only with quiche, sausage rolls and a box of assorted buns.

After a short but sound night’s sleep we were off again; this time to Bob and Mandy’s boat launch.
Bob and Mandy belong to Bourne Borderers, they’ve had many, many hire-boat holidays and always wanted to get a boat of their own to live on. They came to see us on Legend a couple of years ago to pick our brains, we had a lovely day boating on the GU although we don’t think we had much to teach them; they’d already done far more boating than we had and had a pretty good idea of what they wanted.
Their boat is called Matilda Blue, it’s 6 years old, 70’ long, gas-free, and very smart. They had a launch party at the Narrowboat Inn at Weedon where they bought it, and in their first afternoon of ownership had more people on board than we’ve ever had. They treated everyone to lunch in the pub, then in two shifts we all had a cruise to the next windy hole and back. Dave had a go on the tiller; it’s been a long time since he’s had 70’ of boat in front of him, but he managed to not disgrace himself, and is unrepentantly adamant that stuffing the bow into the bushes whilst winding full length is unavoidable and perfectly acceptable.  Of course that depends on where you’re sitting at the time.
Ann-Marie made them a card, and Dave made a Tiller Pin Tassel. 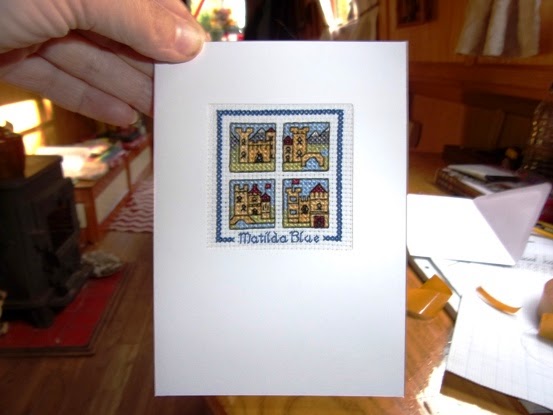 So we’ve now got more boating friends. Whoo-hoo! They’re heading in our direction; they’ll be going through Hawksbury, Marston and  Fazely on their way to the BCN and ultimately Tewksbury so they should come past us when we’re on the Coventry in a few weeks.

Richard, Katherine, Kieran and Leila came for the day while we boated from Shenton to Stoke Golding. 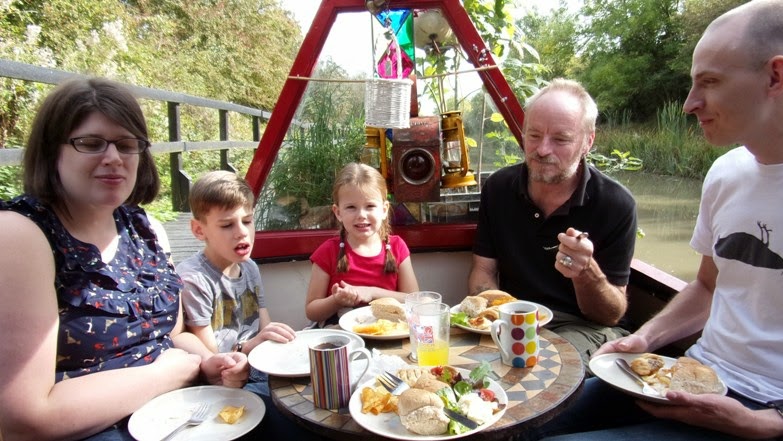 They’d not been before and the kids were fascinated by the whole affair. They wanted to know how everything worked, what everything did and how we did everything in such a little house.  Kieran even had a go at steering, despite not really grasping the principal and not being able to see over the roof. There was no-one coming the other way. Well, no-one in a bigger boat.
While we were still within striking distance we went to have a look at the Bosworth Battlefield site, a beautifully landscaped hilltop where, up until the 1960s, it was thought that the most important battle in the War of the Roses took place, where the last of the Plantagenet Kings was overthrown and where the Reign of Tudor began. It has recently been proven that if you’d stood on this hilltop when the battle was taking place, you’d have had a panoramic view of the three armies beating the heck out of each other on the marshy plains below. Still, it’s a very evocative place to be, and all rather sobering when you consider that the industrial revolution that caused the canal to be dug started in earnest about 250 years ago, and the battle between armour-clad, mace-wielding nutters took place a mere 250 years before that. 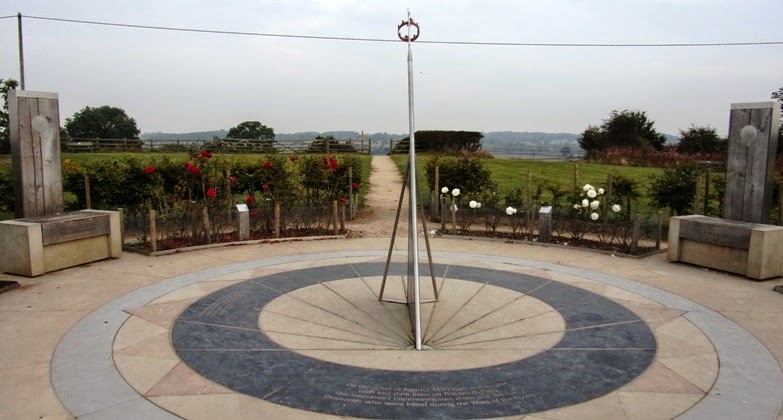 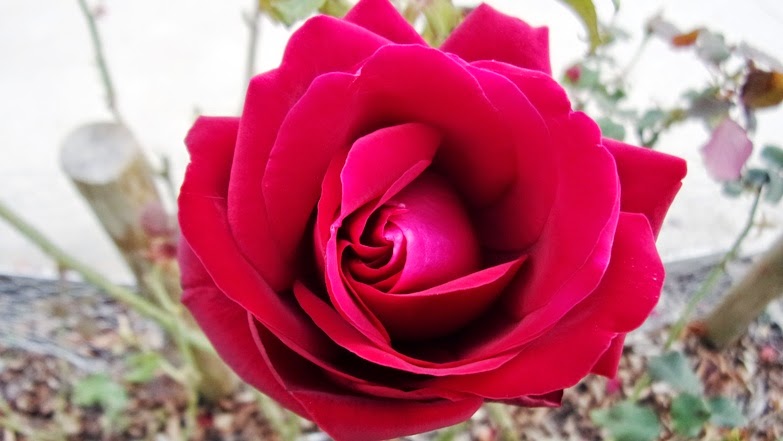 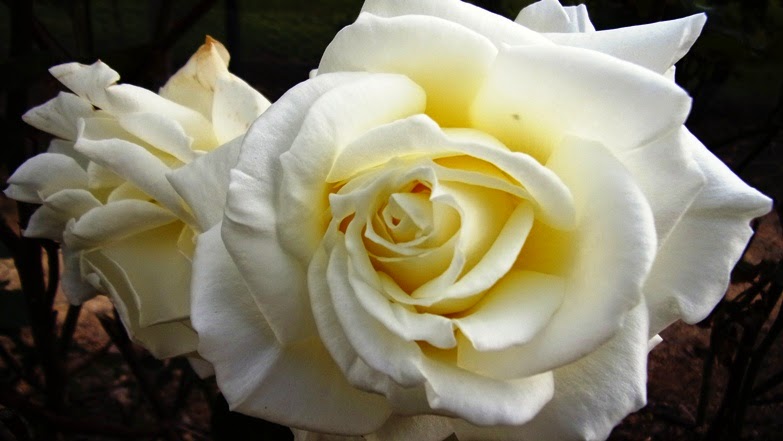 In the afternoon we drove down to Hartshill on the Coventry canal, a short hop down the road, where the lovely Happy Daze was moored with Lindsay, Paul and happy Jack on board. 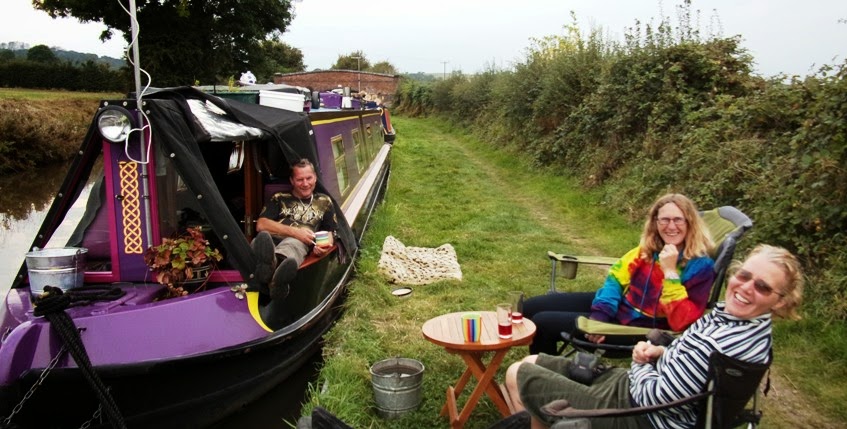 Jack had been to the vets recently, so it was good to see him almost back to his old self. We had tea and cake, followed by a walk up the hill where we were treated to a wonderful view over Leicestershire with the Derbyshire hills in the distance. In the evening we all went to the Anchor for dinner. It was a lovely day and we really didn’t want to leave. Legend will be at Hartshill in a couple of weeks, by which time Happy Daze will be the other side of Braunston and heading down the GU. Such is boating; you make the most of fleeting visits.
at October 07, 2014

Hi Anne-Marie and Dave, I have just discovered your blog - what a treasure! I've read some of the 2014 posts but had to find and read your NZ adventures (being a UK-born naturalised NZer that's a given). I loved your descriptions and laughed out loud when I read that the two hour trip from Te Anau to Milford took you five hours - we took 6 back in 2001, lots of stops to walk, photograph and 2 picnics ...
I'm not sure if we saw you on the cut this year, but may well have done. We were moored at Ansty after the festival up the Ashby and had a lovely view of many many working boats going past on the Monday.
We are now back home in NZ for our summer and will be back onboard nb Waka Huia in May. I hope we see you on our travels,
Marilyn and David
PS Our blog is nbwakahuia.blogspot.co.uk - I am preparing the End of Phase report in a jet lagged fashion at the moment - it's midnight and I've had 4 hours sleep and am trying to get tired again!

Glad you like the blog, thanks for commenting. We loved New Zealand and will have a look at your blog.

Hope we meet up on the cut sometime. D&AMx