Eventually we had to take our boat away from the beautiful Froghall Basin and back to the real world. 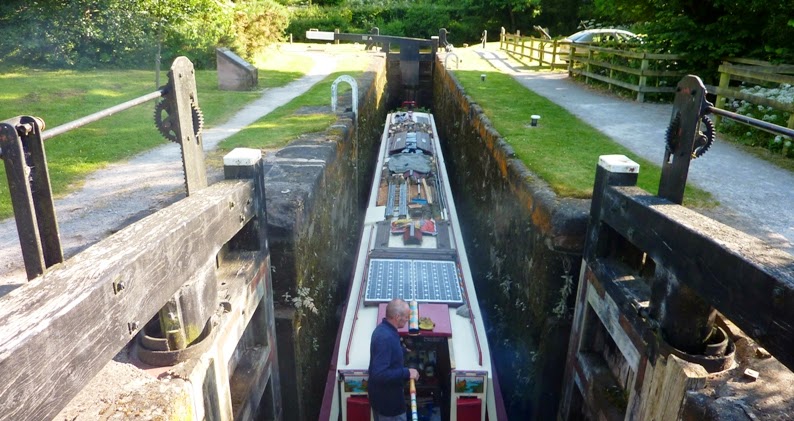 This time we filled the water tank before we went through the tunnel so we could use the motor and avoid any undesirable Ann-Marie/very large spider conflicts. Once on the other side we washed the roof,

then put it all back together, 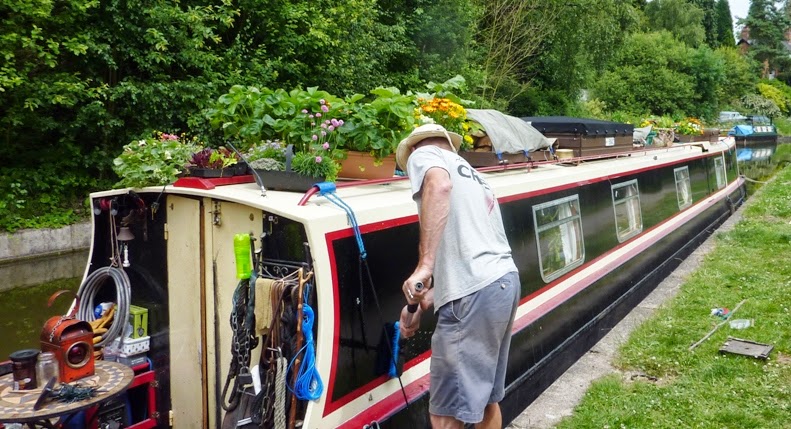 apart from the big tubs which have broad beans, runner beans, courgettes, tomatoes and lettuce in them and are too big to go under most bridges, never mind tunnels. While we’re boating they get humped into the well deck along with the raspberry canes. Next year we’re going to try and get the raspberries to shrub out sideways.

On our way up to Consell Forge we did our bit for the greater good by pruning back an overhanging branch and cleaning an information sign. It’s not often that we’re in the right place at the right time to join in with volunteer work parties so we’re always on the lookout for an opportunity to contribute something towards the upkeep of the waterways.  We stopped for a couple of nights right outside the Black Lion. It was a lovely mooring, made all the better by the Churnett Valley Railway going right past the pub, and the pub having very nice beer.

Elizabeth brought her daughter Sarah along for the day for some EOTAS which, that day, meant learning about canal locks and water pressure and river flow and invasive plants and cherry buns. The cherry buns lesson will no doubt be remembered long after all thoughts of hydraulic equilibrium and the spread of Himalayan Balsam have faded, and so it should.

We boated with them up to Cheddleton, which has also got a pretty railway station, 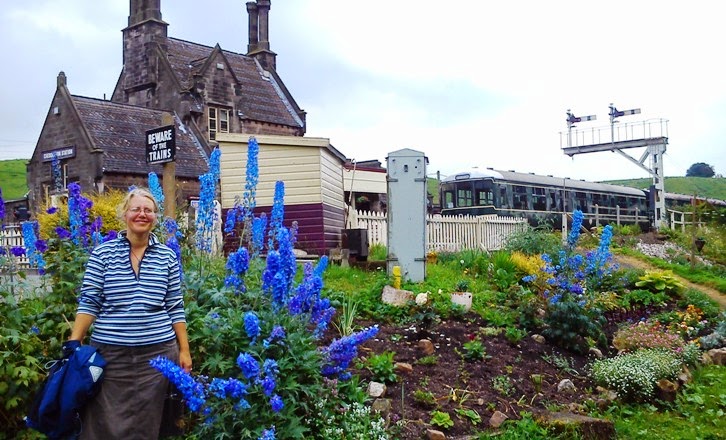 then the next day, retraced our steps up to Hazelhurst Junction where we reversed back to the lovely moorings on the Leek Branch.
Dave made good use of the wide towpath and got the new window frames finished off. They’re all done and in now, and very smart they look too. While we were waiting for the last coat of varnish to dry, we thought that as we had all this outside space, it would be a good idea to tidy up the well deck and give the inside walls a lick of paint. As is the way of things, this soon developed into completely emptying the well deck, attacking the floor with the wire brush attachment on the grinder 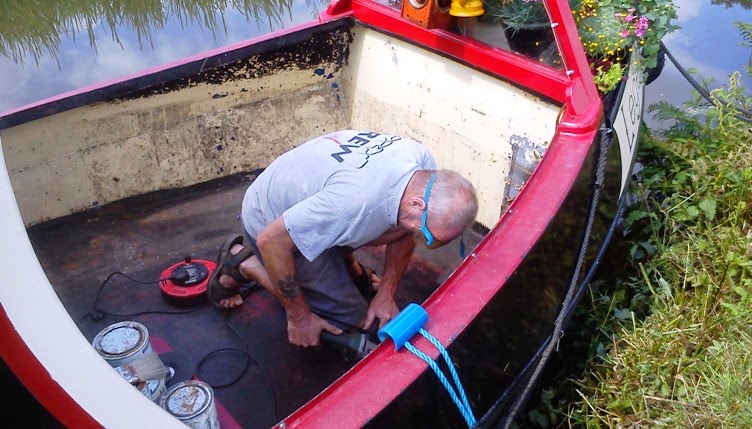 and repainting the whole thing. 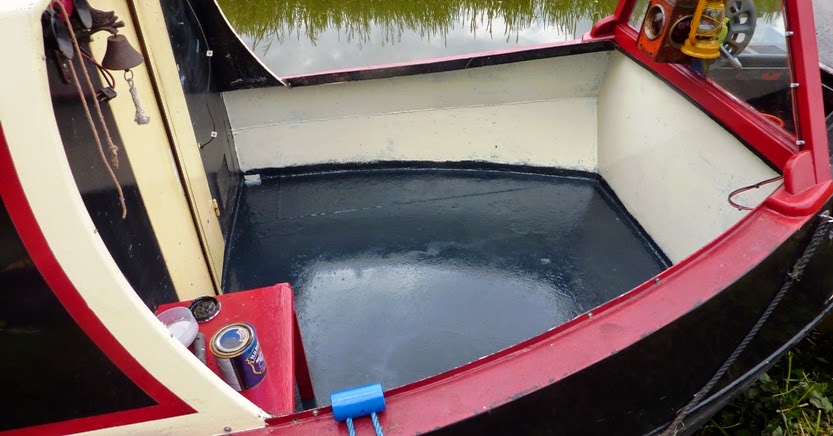 It was hard work and Dave looked a bit like a coal miner at the end of it, but it was all worth it. We celebrated with a towpath barbeque,

finished off with a marshmallow on a stick. 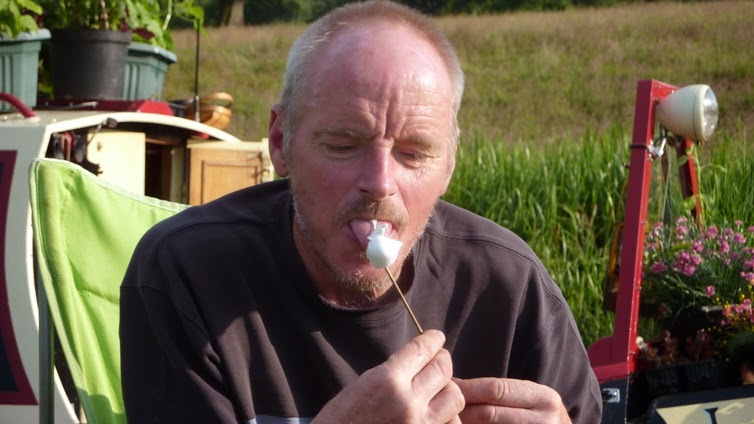 Despite it only being hearsay, we took heed of the warnings about the stretch of waterway below Milton, moored up just before engine lock at Stockton Brook and then went straight  back to Etruria in one go. When we got there David and Kate joined us for the weekend. After one night outside the museum which, it has to be said, got a little out of hand, 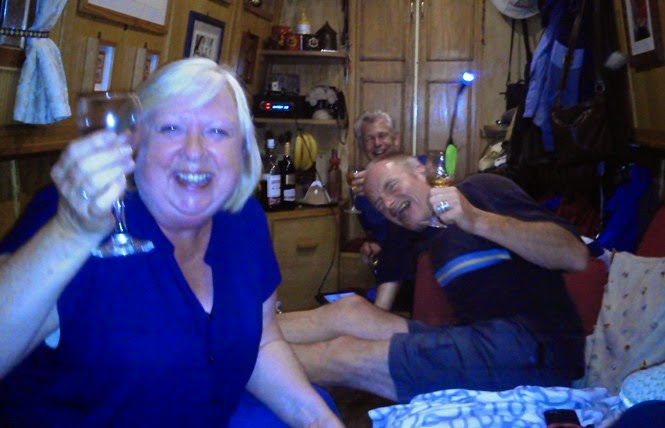 and didn't finish till about 3am, we said goodbye to the beautiful Caldon Canal and, joining the Trent and Mersey again, set off down the locks and out of the urban sprawl. The boys had a really interesting time leaving Stoke as both of them used to drive trucks through there on a regular basis, in fact David still does, and it was very strange to see familiar landmarks go slowly by from a lot lower down. As you drive through Stoke on the A500 and the A38 you are hardly aware of the canal, but it’s right there next to the road for a lot of the way.

We had one night at Trentham near the Wedgewood factory then moved on down the lovely Measham locks to Stone.

Kate got to see a Kingfisher for the first time and it was a really good one; in bright sunshine with its colours all sparkly, it flew ahead of the boat straight down the middle of the cut then perched on a branch till we caught up.  At Stone we dropped through the locks to the water point where David and Kate left us to go home. That included the Stone Bottom Lock which is in the middle of the Star Inn beer garden, and provides passing boat crews with the opportunity to show off their locking technique. Or not, as the case may be. No-one booed or threw rotten fruit at us, so we’ll call that a success.

Just as we’d finished on the water point, and with perfect timing, a boat pulled out of one of the two mooring spots and we were able to nab it.
While we were near a chandlery, Dave got some high temperature stove paint for the Squirrel. We need to get on with that fairly soon, but  It’s tricky; you need to cure the paint after you’ve applied it by lighting small fires just using kindling. Trouble is, at the moment even a small fire is going to be stifling, so timing is everything.
We carried on down the T&M, past the very grand Salt Bridge, 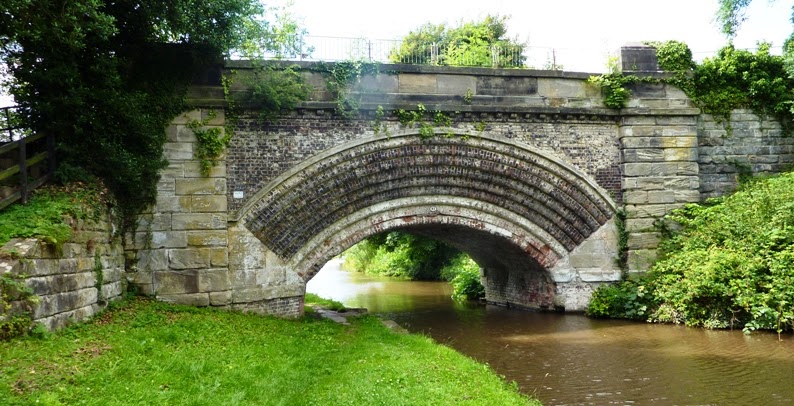 stopping for one night at Burston then mooring up behind the Saracen’s Head in Weston-upon-Trent.

That was where we’d chosen to leave Legend for a long weekend while we went to the Ely Folk Festival. This is the one bash we try to get to every year; it coincides with our wedding anniversary and it’s a fabulous friendly little festival in one of our favorite cities. The organisers have managed to resist the temptation to expand, but they still attract some big names. Steve Knightley was followed by Breabach on Saturday, and Eddi Reader topped the bill on Sunday. Other stuff that made it a terrific weekend were Blackbeard’s Tea Party, Vin Garbutt and our favourite act in the world; The Gerry Colvin Band. For the first time ever, at  1am, we were awake and dancing at the end of the Friday night ceilidh. Loads of our friends were there; all of Bourne Borderers, who were performing around the city and at the festival site, as well as Glen, Holly and Ann from Pig Dyke Molly, who weren’t. Well, no more than usual. We did a Morris workshop with the rather scary Witchmen and almost got it right. It felt good to be bashing sticks with each other again. It had been raining for a few days before the start so we weren’t allowed to take cars onto the camping field and had to put all our stuff into wheelie bins or wheelbarrows, however the weather wasn’t bad on the whole. There was the odd thundery shower, (including one that came bucketing down just when we were all singing along to Steve Knightly’s “Rain”, which was amazing,)  but the field survived and there wasn’t that much mud.  In-between, the sun came out and the arena filled up with happy smiling people. 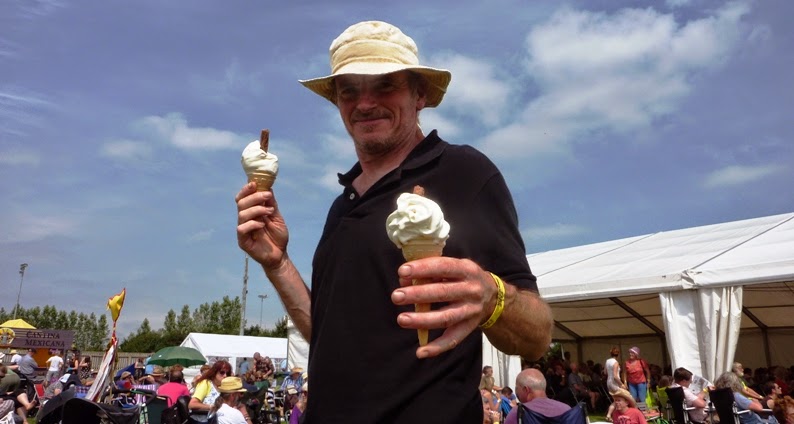 Perfect Ely.
After we’d barrowed our stuff back to the car and said goodbye to all our mates, we came back to Weston. On the journey home we’d been debating whether or not to move the boat when we got back, and settled on not doing. However karma had different ideas. Just as we were giving the plants a good watering we got a text from Gordon and Helena on Mandakini; another couple we met on our Rippon adventure last year. They were just a bit further down the T&M, moored up at Great Haywood and were going to be turning onto the Staffs and Worcester next. We didn’t want to miss them so we pulled the pins and headed their way. It was really good to catch up; we went to the pub and had a brilliant evening.
If that wasn’t coincidence enough the next day we were walking back to the boat and came across Shirley and Peter who were with us on our return crossing on the Ribble Estuary, and who we’d last seen at Appley Bridge on the L&L. We’ve met some fabulous people since we started this boating malarkey and it’s really cool when your paths cross in unexpected places.

Right next to the canal at Great Haywood Essex Bridge, 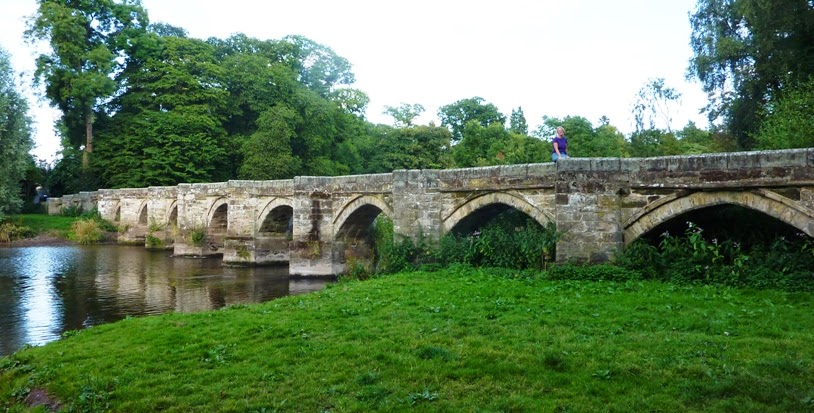 It's a packhorse bridge over the River Trent and very well preserved.

From Great Haywood we went to Rugeley, stopping at Wolesley Bridge for a walk around the nature reserve, which was rather lovely. 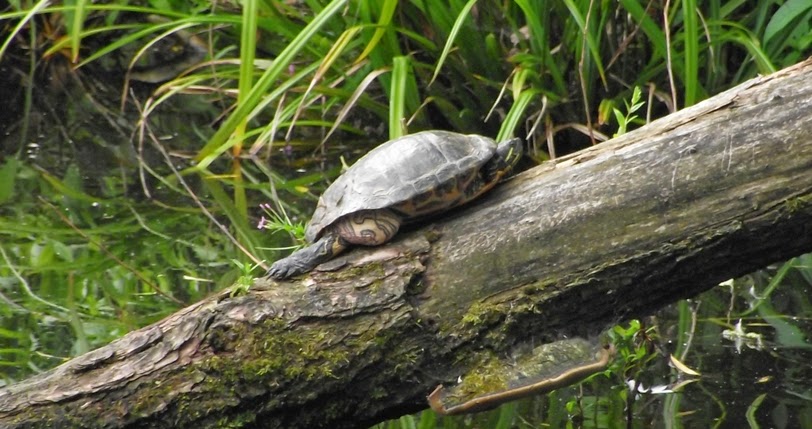 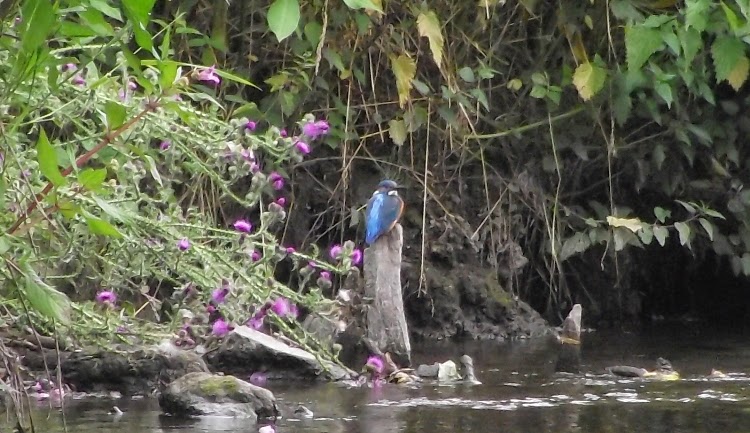 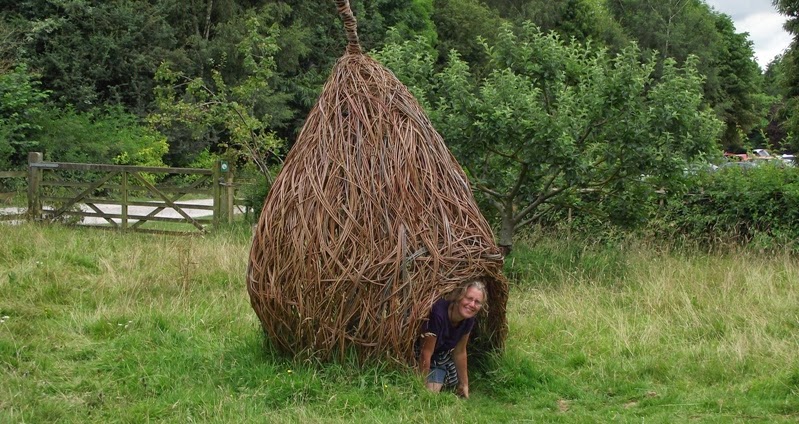 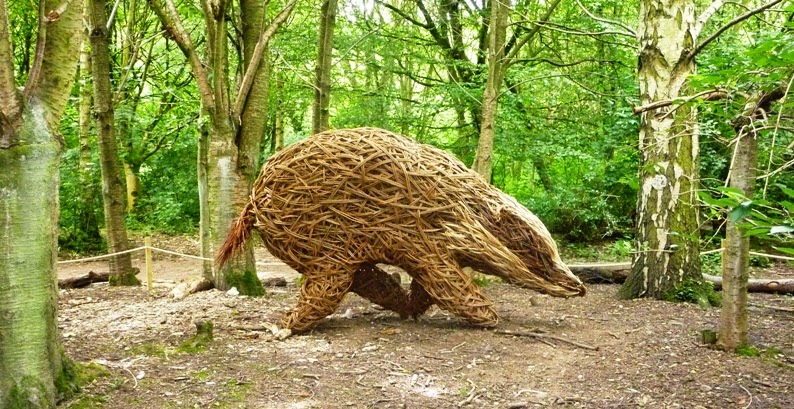 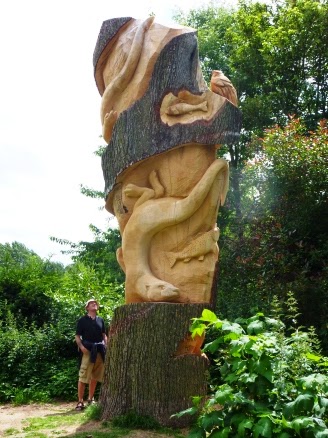 After one night next to the Aqueduct over the Trent, 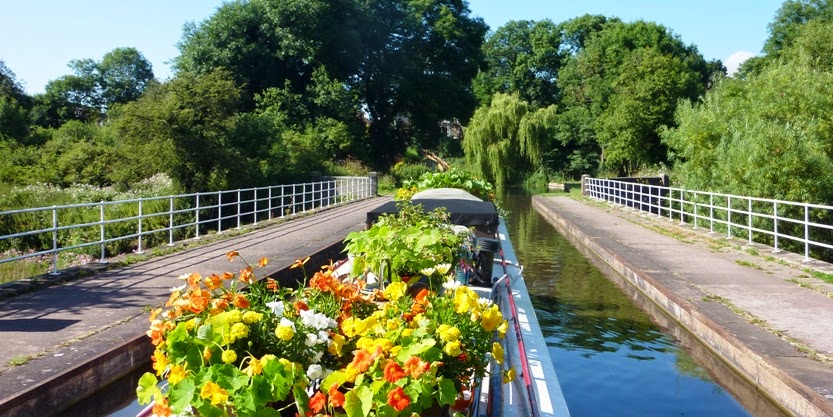 (which is getting rather big now; a little bit further on the T&M joins the river for a stretch, but we’re turning off before that onto the Coventry Canal at Fradley Junction) we had a few days on the visitor moorings in Rugeley; not our usual habitat, it must be said, but quite nice all the same. It got a bit hairy the second night we were there, there was a thunderstorm and at around 3am a big branch fell off a chestnut tree right next to us. With the car parked next to the boat it’s very useful for our immediate adventures; very shortly were going away for 10 days to Ireland for Chloe and Shandy’s wedding in Antrim. John is coming to boat-sit for us and we’ve picked out a tranquil little spot where we think he’ll be happy, but at the moment we’re feverishly ticking things off lists. All we have to do before we sail is somehow shoehorn all ours and Anne’s and Anne’s family’s camping gear into the car, along with a load of stuff we’ve got for the wedding.