Apart from one minor hiccup (more about this later), our carefully worked out strategy smoothly unfolded exactly as planned. We set off through two locks to Todmorden and stopped at the sanitary station, where we emptied out ready for going away. That was followed by the unique guillotine lock and another stop opposite the “Great Wall of Tod” railway embankment, where the car was parked, in order to tranship all our camping gear. 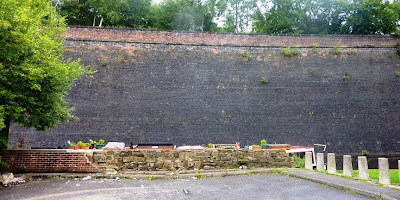 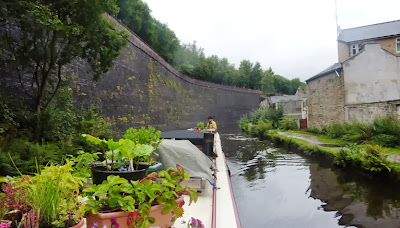 So far, as slick as a greasy piglet. After that we skipped up the rest of the twelve locks towards Walsden with Ann-Marie setting ahead if they were close enough or hopping on the stern as it passed the wing wall if they weren’t. A choreographed ballet of mechanical fluidity.  At lunch time, just before getting to our mooring spot in Walsden, we found ourselves outside Grandma Pollards Fish & Chip Shop, an added bonus that meant we arrived at our previously chosen destination, not only watered and bang on time, but also full of chips. All in all, a tribute to precise timing, initiative and teamwork.

Well almost. Back to the aforementioned hiccup. It happened, of all places, here, amidst some of the most photographed canal scenery in the country. 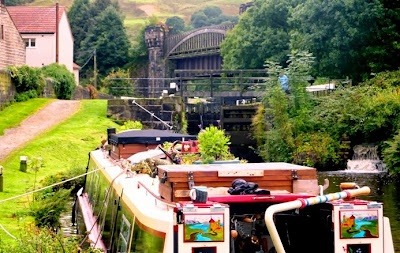 No, we didn’t crash the boat, or break some 200 year-old artefact, or lose all the water or anything trivial like that.  This was far, far worse. One of us (who shall remain nameless) dropped her favourite bestest windlass off the bridge.  The really nice smooth one with the grey plastic twizzley handle that comes off spindles easily – yeah, that one.
There were tears. There was a half hour spent fishing with the magnet. We did contemplate draining the pound but in the end thought better of it. So, if you want a really nice windlass, there’s one under the bridge at lock 21 on the Todmorden flight.

Paul and Steve’s party in Wainfleet was a resounding success. Of course, being yet another piss-up in a brewery with a weekend’s camping thrown in for good measure meant the odds were always in its favour, but the added bonus was the fantastic weather. We had wall to wall sunshine on both days; unbelievable for late September and such a contrast from last year. It was the first time we’d seen Frankie & Harry since they moved to France so it was all a bit emotional to start with but it was soon like they’d never been away. In reality we’re going to see them about as often as if they still lived over here. We had such a good time that we stopped on another night along with Paul & Janice, Frankie & Harry, Norm & Jude and Steve & Ellie. As Paul & Janice had hired a cottage to stay in we all had a meal together on the Sunday night which was really lovely.

We got back to Legend on Monday afternoon and had a look on the internet for some casual work before Christmas. We need to do a bit each year to keep us afloat. Last year Ann-Marie did nearly four months on nights for Yodel, which was great money-wise but a lot more than we’d planned. This year we’ve both applied for Royal Mail temporary jobs, which should finish on Christmas Eve. Ann-Marie has gone for a Data Entry position while Dave’s applied for mail sorting. Both jobs are in Stockport, which at the moment is 15 miles away, but will be closer when we start.

Tuesday was another nice day so we took the boat up through eight rather stubborn locks to Longlees, just below the summit pound.

In the afternoon we put our walking boots on and climbed up, and up, and then some more up to the reservoirs that feed the canal. The views from the top were great, and would have been even greater without the haze. 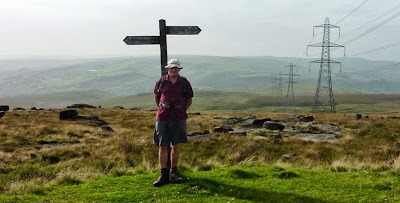 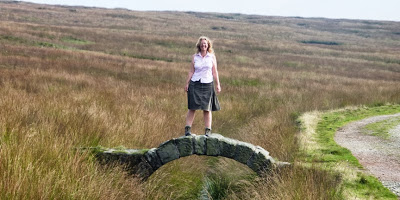 When we got back Dave decided to see if he could do anything about the gas water heater. We’ve been putting up with the pilot light not staying lit for ages as we thought it would either be a £30 thermocouple or a service by a qualified engineer or both. After a trawl through google we found that it could be just a bunged up pilot jet. Ten minutes of fettling had a nice blue flame perfectly aimed at the thermocouple and that was that. It now lights with the first click and stays on till you turn it off - neither of which it has done for about a year. One of those “why didn’t we do that ages ago?” things.

Only a mile or so but quite significant. The water in the summit pound was rather on the low side, but still navigable. It’s probably kept that way on purpose, especially now all the summer cruisers and hire boats have gone. We’re at that time of year again when we can spend all day cruising and never meet another boat. In the afternoon we went to a garden centre and bought some winter pansies and some alpines to give the pots on the roof a bit of colour over winter. We also got some more bulbs so next spring should be even better.

Almost as soon as we set off down the Littleborough flight the following day, in fact at the second lock down, we met a Shire Cruisers hire boat on its way up. During the usual chit-chat that occurs at such meetings the happy holiday-makers happened to mention that they thought the locks rather slow to fill, to the extent that they’d had to “assist” one set with the boat. We didn’t think much of it at the time, we’ve had to do the same on occasion, but three locks further down we discovered what had happened to them. They’d gone into an empty lock, shut the gates and opened the paddles at the top. What they’d failed to do was check that the both the bottom paddles were closed, which they weren’t – one was slightly open. How long they were sitting there with water flowing through both ends before they rammed the gates isn’t clear, suffice to say that the pound above them so low it was barely navigable, and at least two pounds below them were over-full. That in itself isn’t a complete disaster, but then of course we made it all a lot worse by dropping down the flight and taking all the excess water with us to Littleborough. It was only ankle deep on the towpath for a little while.

We went to Jono and Nicole’s on Friday night and stayed over, then on Saturday they came for a spot of boating from Littleborough to Rochdale.

This is Jono on the tiller; notice how worried he looks. It was shortly after this that we ran aground - big style. We tried poling off, but even with the help of a couple of passers by it wasn't moving. We ended up with the block and tackle pulling backwards which worked a treat, so it was all ok and quite exciting in the end. For the record it wasn't Jono's fault. If Dave had been steering it still would have happened; God knows what we were stuck on but it was right under the skeg. The canal through Rochdale isn’t as picturesque as other towns – in fact it’s a bit grim. There’s no way we were stopping in the middle of the town; between the locks and Well i’th’lane Bridge was definitely bandit country, but a couple of hundred yards the other side was a world away. We still wouldn’t have left the boat on its own, especially after a local yoof on a bike embarked on our standard FAQs. After the usual half dozen he added a new one; “Do you get attacked often?” It wasn’t so much the assumption that it might happen, for which we blame television, but that it was a common occurrence. Despite that we figured it was ok for an overnight stop.  After dinner Jono and Nicole went home, but not without leaving us with a list of emergency phone numbers and detailed instructions on how to camouflage the boat, erect machine gun installations, and other ways of warding off the inevitable forthcoming attacks. After a very quiet night during which nothing at all happened we set off down three locks to a lovely mooring at Castleton.