Autumn is getting into full swing now; we’ve been to a 2CV Club Halloween party in the pub, the fire is on all day, there are pumpkins on the bow and we’re going for walks with big boots and woolly hats on. The trees are so magical at this time of year. This is the view through Fenny Compton Tunnel. 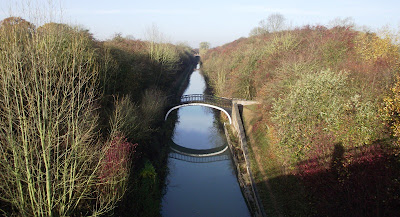 Spot the deliberate mistake. In 1860 the top was removed and it was turned into a cutting. Talking of going for walks, we went out a couple of days ago in the afternoon, along the towpath, and then off on two little footpaths forming a loop to bring us back to the canal. It was obvious from the start that the second of these was a rarely used path; there were no other footprints and Old Farmer Palmer had ploughed right to the edge of his field and planted winter wheat, but we plodded on, getting a good workout from the rough terrain. Then we came across an electric fence right across the path. We checked the map to make sure we weren’t in the wrong place before ducking under it and forging ahead. Sure enough, a little way ahead the next yellow way-marker came into view. What also came into view were a couple of cows standing in the open gateway. Now cows don’t bother us much, but these two had their rather large and snorting boyfriends with them. As the saying goes, we made our excuses and left. Sharpish, back the way we’d come and very cross. Ok, so it’s only a footpath from nowhere on a busy A road to a bridge over the cut, and we were probably the only people to have walked it in months, and the bulls might have got there by accident, but the electric fence didn’t . It’s a right of way and our very Britishness has been assaulted. Hopefully there’s some ombudsman we can complain to. We’ll probably use green ink and underline things.

Before and after the very good Halloween party, quite a few of our friends from 2CVGB came along from the pub campsite to see us and our little boat. They were all rather jealous that we could just stagger home when the party ended, rather than having to crawl into a tent. It was good to see everyone and the effort put in to ghoulishness and ghostliness by all concerned was, as usual, excellent.

Last week we had our longest separation since we got together. Ann-Marie went to her parents' for 4 days to help out after Pete came out of hospital following surgery and Dave stayed on the boat. He took the opportunity to empty the wardrobe onto the bed and put some ventilation in. It’s important to get as much air movement as possible through all the cupboards on a boat, so he’s put a slatted panel in both sides, cut slots or holes in the shelves and drilled low level holes around the base. 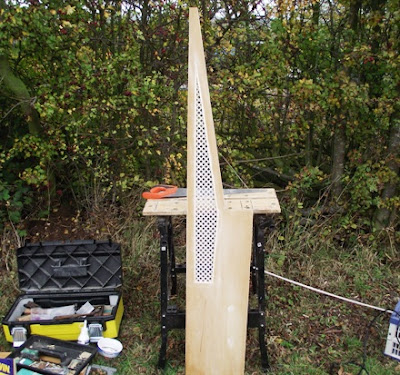 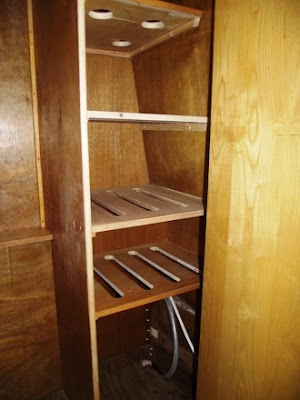 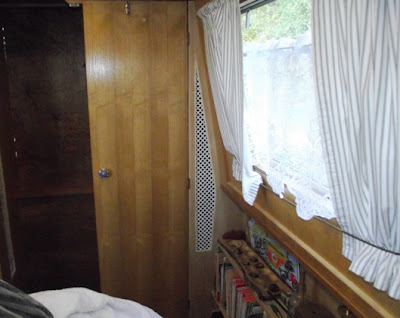 While he was at it he cut an access hatch in the wardrobe floor, Waxoyled the steel under it and fitted a bilge pump with an automatic float switch. 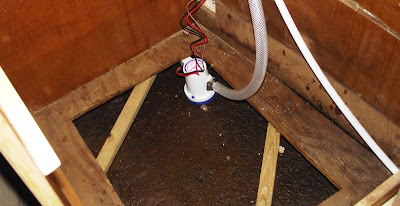 That’s our lowest point. If, God forbid, we should spring a leak, or if the pipes burst, then we’ll know about it long before our feet get wet. It’s one of the few things that you’re allowed to bypass the battery isolator for so it’s wired up with its own in-line fuse. He also put some diamond vents in the lounge cupboards, painted the drawer fronts and lowered the table and made it hinge 6” away from the wall so we can store the chairs behind it when it’s down. 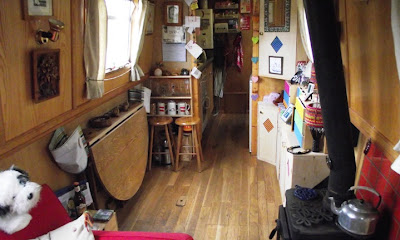 Busy little what-not isn’t he? Ann-Marie came home to a completely different boat. He also painted an old “Ripple Bonnet” 2CV headlight to use as our tunnel light. 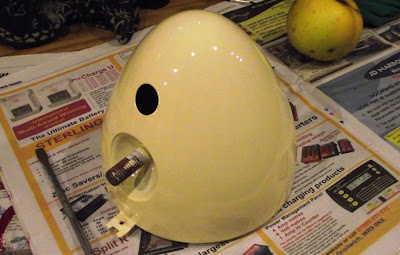 This is what our re-vamped front end looks like now. 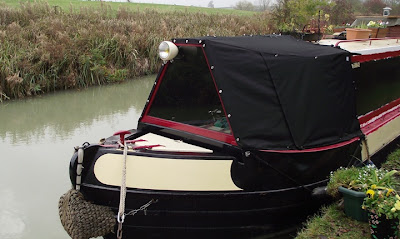 This is what it was like when we bought it. 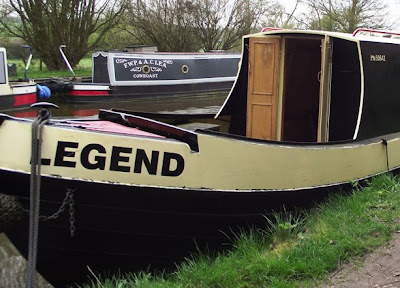 Dave’s now having a varnishing frenzy. All the lower panels in the boat need a couple of coats, as do the new book shelves, the boxes in the lounge, the table, the front steps etc. etc. It is looking good though. All mellow, glowing colours with beautiful grain patterns and all becoming part of the fabric of the boat rather than just stuff that’s in it. Ann-Marie hasn't been idle either, but all the stuff she's been doing is top secret at the moment. All will be revealed in due course.

We had a night at Kim & Luke’s after going to a pub quiz at their local. The questions were really tough, but despite being up against a couple of full-time professional quiz-goers and a team of 16 equipped with I-phones we didn’t disgrace ourselves. We even knew that Roy Rodger’s horse was called Trigger. Shame we didn’t write it down.

While we were at Kim & Luke's we picked up a parcel that we’d had delivered to their house. We’d been very excited about getting this. 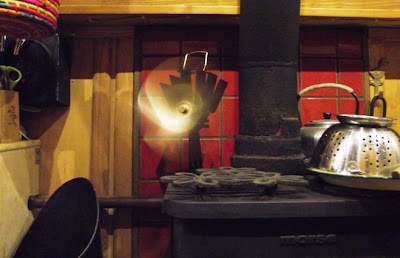 It’s called an Ecofan, there’s an electronic gubbins that turns the heat difference between the top and the bottom into a current to turn the motor. It’s fab. It’s eradicated all the hot & cold spots, and it looks pretty. We did look at these, which are powered by a Stirling engine, but unfortunately the 6”x3” base is just too big for our little Squirrel!

The latest project is to change the plumbing on the radiator that runs off the back boiler. Yes, that’s right, just as winter approaches. It’s not complicated though, for a reason so far unknown to mankind, the pipe leading to the expansion tank, instead of exiting from the highest point in the pipework comes from the lowest. So if the water boils (which is quite likely given that it’s gravity fed) a whole radiator full of water would need to go through the vent pipe before any steam could escape. In fact what happens is that about half a pint of water overflows from the expansion tank into the engine room before cooler water flows into the back boiler and it stops boiling. It’s still bloody stupid though. Today we drained the system and tomorrow we’ll get some new fittings from Screwfix and sort it out. That's something else done that was never on a list.
at November 10, 2011