Water and Electricity don't mix, but the opportunity would be nice.

We have been very bad bloggers! Just as everything started getting exciting we abandoned our reader for a whole fortnight. For this we deeply apologise – our only excuse is that we have been a bit busy of late. Here’s a quick summary of Listless happenings.

We found Ken! On Sunday Mum & Dad took us to Lincolnshire, Glen and Steve put us up for a night and on Monday Glen and Holly gave us a lift to Boston where our lovely big Kon-Tiki had been languishing while we were away. While we were there we went up the Boston Stump. 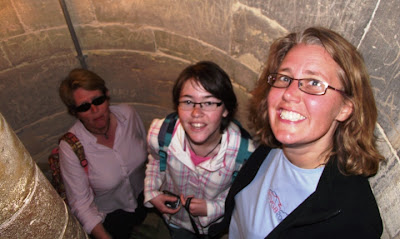 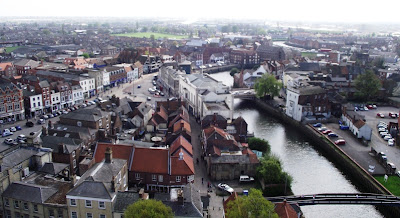 Poubelle passed an MOT test on Tuesday with no problems and was insured and taxed on the same day.

On Thursday we helped Karen clear out her garage and rolled her old 2CV out into the daylight. She wants to sell it so she needed to know that any prospective buyers could actually get to see it.

On Friday we spent a couple of hours clearing Mum & Dad’s patio; there’s now room to sit round the table. In the afternoon we went to Odiham bowling club with Dad and watched his team nearly win.

On Saturday morning, with military style precision and timing, we A-framed Poubelle behind Ken from Fleet to Cook’s Wharf – the place we checked out last week. 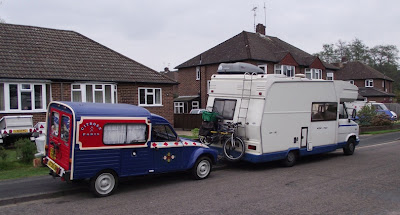 After uncoupling them we left Ken in the car-park and drove Poubelle over to Cow Roast where we took possession of the keys to our new home. We also met Chris, the guy who used to own and live on Legend. He was sad to part with it but we think he knew it was going to be loved.

On our maiden voyage aboard Legend we set off from Cow Roast at around 11. We’d arranged with Karen, Andrew, Lauren and Ben to meet up somewhere along the way, they were driving to Cooks Wharf and walking back along the tow-path. We’d not gone far before we came across them and with a crew of six we were down the locks and past the Aylesbury arm in no time. Andrew and Lauren both had a go on the tiller, 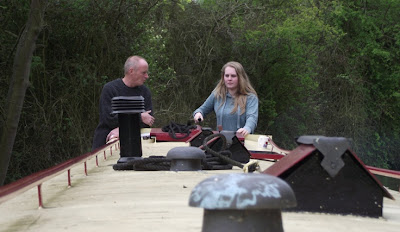 everyone took turns lock-wheeling, we picked up a bag of coal on the way and the whole operation went like clockwork. We passed a couple of people who knew the boat and asked after Chris, we told them we’d bought it that morning and they wished us luck with our travels. Around 2.30 we tied up at Cooks Wharf right next to the car-park and Ann-Marie produced tea and bacon butties for the whole crew. 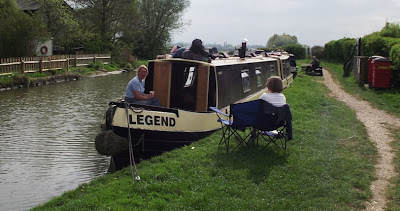 In the afternoon everyone mucked in with general boat cleaning, then in the evening we went up to the pub in Cheddington for dinner. Karen and Andrew dropped Dave off at Cow Roast on their way home so he could bring Poubelle back, so our first night in the boat was spent with both our vans less than 20’ away.

On Sunday Ann-Marie started cleaning from stern to stem while Dave tackled the Engine Room. In the evening Frankie and Harry came over to see us, 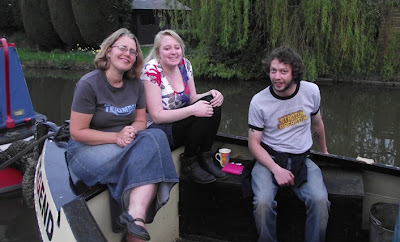 and Ann-Marie scored a hit with her first go at the oven. We also found out that the batteries wouldn’t hold a charge; not entirely unexpected, and Harry came up trumps with 4 new ones at trade price. We’ll have to wait till Thursday for them so till then we’ll be running the engine for a couple of hours each day to keep the fridge cool.

On Monday we went into Aylesbury for some bits for the bathroom, ordered a new sofa-bed and bought a new tap for the kitchen. When we got back Dave took off the old tap which involved removing 2 compression olives, then we found that the new tap wouldn’t fit without adaptors. So within 3 days we’d got no electricity and no water.

On Tuesday we hired a van and went to Chesterfield. By 1.30pm Anne had an empty walk-in wardrobe and we had a full van. By 6.30pm, thanks to some help from the people in the next boat, we had an empty van again and a very full boat. 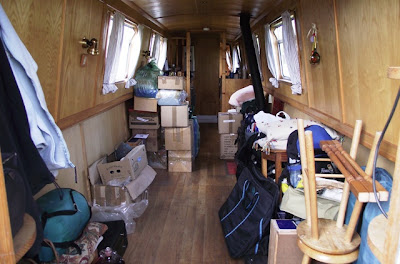 On Wednesday, with intermittent power and bottled water, Ann-Marie started unpacking the many boxes, while Dave went off for the right pipe fittings then set too with a scraper and a wire brush in the well deck. (To be fair, there isn’t a mountain of work to do; she needs a lot more storage building in, a thorough clean and painting. There are one or two urgent jobs that need sorting PDQ; the well deck has got flaking paint round the corners and the whole boat lists to port – re-siting the batteries on the other side will probably fix that.)

On Thursday we went to a timber yard and came back with two 8’ x 4’ sheets of thick plywood in the back of Poubelle, one for cupboards and shelving and one for fitting out the engine room. In the afternoon Mum & Dad turned up bearing gifts; we’ve used their address for mail-order stuff and they delivered a nice shiny new genny and a box of LEDs. In the evening we went over to Frankie & Harry’s for tea and batteries.

So by Friday morning we had reliable power, a beautifully working kitchen tap, bright, warm-white LEDs all the way through and, due to all our boxes of books all being on one side, a level boat. Having got Legend a good deal on the way to how we want her, on Friday afternoon we locked her up and drove up to the camp-site at Holbeach Hurn where our adventure began nearly a year ago. There was a 2CV club Easter camp on over the weekend and load of friends that we haven’t seen for yonks were going to be there, including Chloe, who we hadn’t seen for 8 months and who is now back from Cyprus and working in the new Birmingham hospital.

As for becoming listless, we seem to have suddenly acquired a very big one.
at April 25, 2011