A short time in a big country

We’ve been in Australia over a week now and the time has just flown by. Our poor reader must be wondering what we’ve been up to.

After leaving Adelaide we came across this little township, 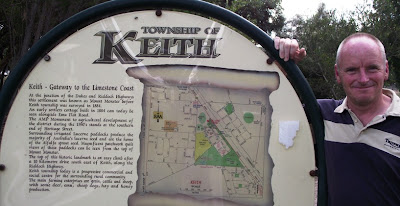 so we stopped and had a cup of tea in honour of our mate Keith. Further on there was the Mount Monster Conservation park where we climbed to the top of a granite peak and had a look out over South Australia and the way we’d come. 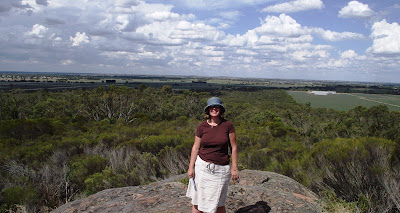 Of course we knew Australia was big before we came, but you can only imagine so much beyond your own experience. Only now we’re here are we getting an idea of just how big. It’s funny that although, just like everywhere else, you can only see to the horizon, it feels like a big country. Maybe it’s the wide straight roads to infinity or something about the sky over an endless landscape, or even the attitude of the people, whatever, there’s something different.

Ann-Marie had a go at driving the van (which is called Victoria, ‘cos that’s what it says on the number plate) and despite not having driven since we sold her car, and despite the van being a big automatic long wheelbase hi-top camper, she got along fine. 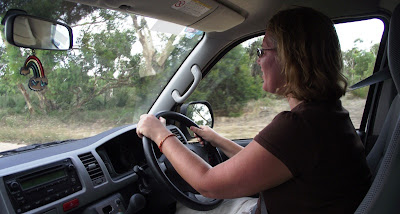 We stopped for the night in the little town of Penola. We went or a walk in the evening in shorts and sandals, which was interesting. There are big jumpy flying beetly crickety things that boing about on the pavement. They’re ok once you know they’re there, but they don’t half make you jump.

Our next stop was Mt Gambier. The town is built on the rim of a dormant volcano. (All Australia’s volcanoes are classified as “Dormant”, rather than “Extinct”. Apparently.) At the bottom of the volcano’s crater is this amazing blue lake. We haven’t messed about with the colour, it really is this blue. 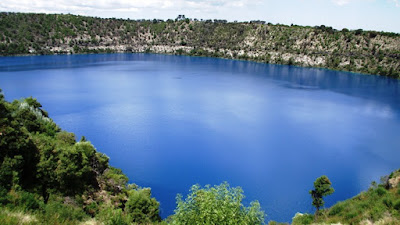 With our typical perfect timing we’d walked round the lake, seen several of these, 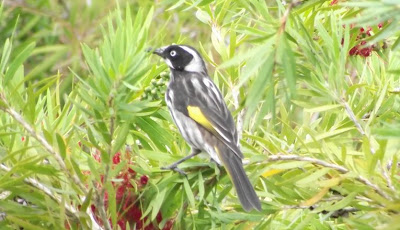 and were back on the road again just before this happened. 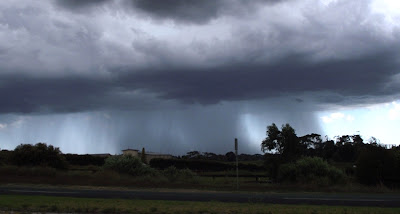 It cleared up just before we crossed into Victoria, having made sure we had no plants, soil, fruit, veg, vines or potatoes on or about our persons. After all the warning signs we were expecting a strip at the state line at the very least, but there was no-one there and apart from the road signage being a bit different, Victoria looked very much like South Australia. Who’d’ve guessed?

Wednesday night saw us parked up in beautiful Port Fairy, 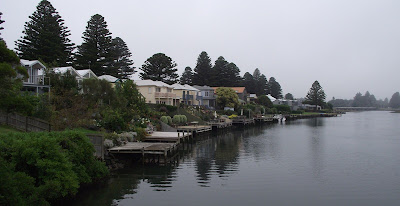 where we had some fab fish & chips, and just as dusk was falling, walked around to the lighthouse on Griffiths Island, watching Swamp Wallabies quietly hopping about and graceful Shearwaters coming home to their burrows. A quiet night on the quayside.

Our first stop on Thursday was Tower Hill Game Reserve; another volcanic crater, this time the bottom is a mix of swamp, scrub and forest, which has been replanted and restored over the last 20 years or so, and had lots of indigenous species re-introduced. As soon as we drove in we saw some emus, 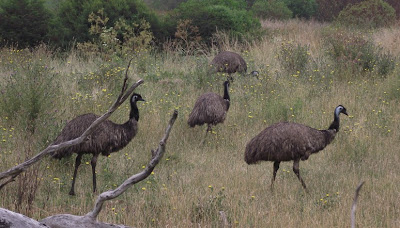 then on the walk to the top of the central peak we were taking photos of a koala in a tree just as a kangaroo hopped across the track in front of us. 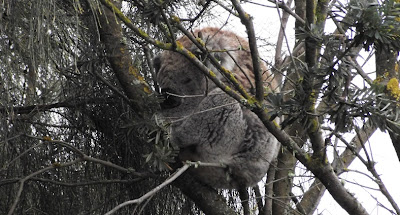 A bit further along we found ourselves casually following a couple of emus along the path. We couldn’t see much of the reserve though; low cloud was rolling into the crater.
at February 19, 2011