Occasionally, the logistics of having a car and being Continuous Cruisers get a little complicated. Most of the time we just move it along a bit then walk back down the tow path and collect the boat, or vice versa. We enjoy the walk, it keeps us fit, we usually incorporate some shopping or a visit to somewhere and it really isn’t an inconvenience. However, when there are big moves involved, especially if they involve rivers, it requires a bit of planning. After leaving the dry dock in Northwich we had to go back down the Weaver, the Manchester Ship Canal, the Shroppie and the Middlewich branch, retracing our steps round the big circle that had got us there. As we would be heading south on the T&M when we got to Middlewich, (rather than north back to Northwich) we couldn’t leave the car behind like we did the last time, so we needed to come up with a different cunning plan. Yes, Dear Reader, it would indeed be ever so easy to get a bus from Middlewich to Northwich, but where’s the challenge in that? It would also mean un-knotting the purse strings, and you know how reluctant we are to do that. We studied the map and found the ideal spot; just round the corner from Screwfix in an industrial estate in Winsford, which was about a mile and a half from the Middlewich branch, and a nice five mile walk back along the riverbank back to Northwich. The 48hr moorings below Hunt’s Lock gave us the perfect opportunity to clean a week’s worth of dust and muck off Legend’s roof, put all our ropes into soak and get the car moved.

And then we were off. First stop was the services on the river in Northwich. There had been a fair bit of rain in the previous couple of days, which was great news for our plans as it meant there was a good chance that the Cheshire locks and the Bosley flight would be open again, allowing us to get up the Macclesfield canal for the winter. However, it also meant that there was a good flow going down the river, making mooring up on the services quite tricky. We’d forgotten how quickly things get exciting on a flowing river, especially as our good ropes were in the wash and we were using our reserves, but we managed to make the turn and moored up pointing into the flow. Going with the river past the boat lift and back down to Runcorn was really speedy.

We stopped at Barnton Cut and Sutton Weaver on the way down, both of which are on canalised lock channels.

On these calm sections there is very little flow, which makes mooring very easy; you don’t have to turn into the stream or any of that malarkey, but they still go up and down as the flow on the main river increases and decreases. At Sutton Weaver there was a submerged shelf along the bank below the moorings. It only stuck out about six inches, and we didn’t notice it when we tied up because the river was quite high. Later on, as it went down, Legend caught on it, making us lean over. Dave went out in the rain and pushed us off. Then it went down further, the ropes tightened, and we leaned the other way, so he went out again and loosened us off a bit. Predictably, we woke up at about five in the morning back on the shelf again. It felt like the river was playing some childish game.

A bit later that morning, at a more sensible time, we phoned the Ship Canal Harbour Master to make sure they were expecting us and to check on any shipping movements. He gave us the all clear, so with a couple of hours to kill before our booking through Marsh Lock, we had a little cruise past the lock along the rest of the Western Canal. 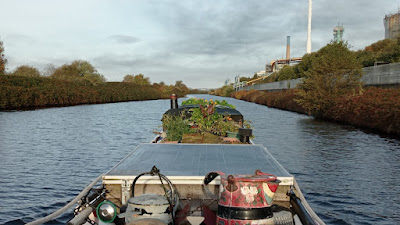 We thought we’d get to Western Point Lock right at the end, but just after the junction with the derelict Runcorn and Western Canal we found a low bridge that stopped us.

The old lock gates leading to the derelict Runcorn and Western canal.
It might have been possible to swing the bridge and carry on, but we didn’t have time to find out, so we turned round and went back to Marsh lock where we found two CRT lock keepers waiting to let us out onto the MSC.

The difference in the Ship Canal from the last time was incredible. It was calm and sunny, there were only two big ships on it and they were both tied up in the docks on the Mersey side.

The view of the Mersey Estuary, just over the bank.

A flock of Lapwings kept us entertained with their aerial acrobatics. 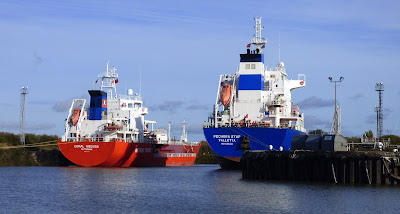 The only thing we saw moving was the little crew ferry at Stanlow.

About halfway down we heard on the radio that the 2,000-tonne dredger Deo Gloria was coming into Eastham Lock off the Mersey and heading for the QEII dock, we thought we would be crossing bows, but the harbour master very kindly held it back till we were safely in the lock at Ellesmere Port so we didn’t see it. 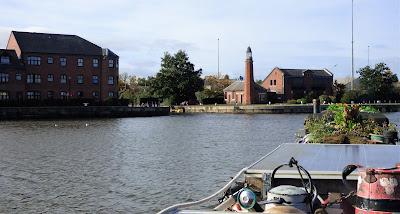 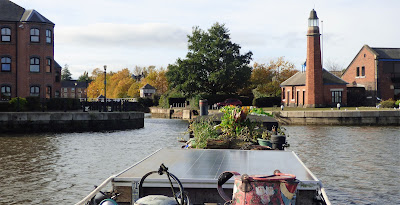 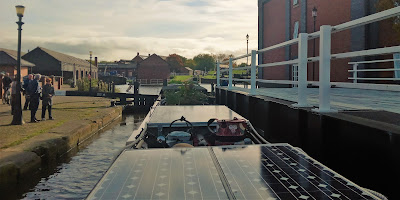 ...and safely in the lock.
Ann-Marie caught a glimpse of the dredger going past as we were working up Ellesmere Port locks.  It was a bit bigger than the dredgers we usually come across. 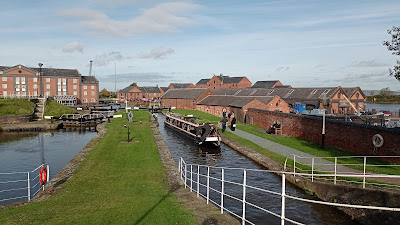 Working up the locks in the museum.
We got up the Shroppie to the top of the Chester staircase locks by close of play that day, about 20 miles from where we started. It was really lovely going up the staircase; two very nice volunteers and lots of very interested Gongoozlers to chat to. 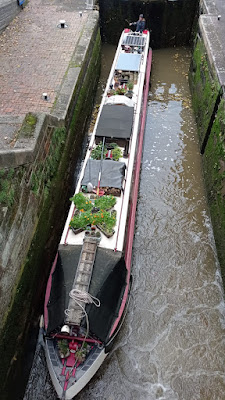 In the morning we carried on through Chester and up the Shroppie, sharing locks and leapfrogging all the half term hire boats heading back to their bases at Middlewich and Nantwich, making it another chatty friendly day. 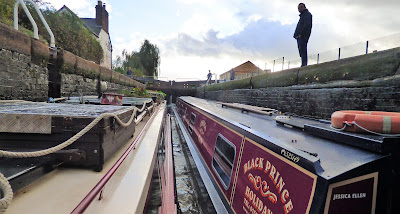 We stopped at Calverley for the night and took advantage of the lovely hot shower at the services, then forged ahead in the morning, joining the throng of holiday makers round Barbridge junction and across the Middlewich Branch. 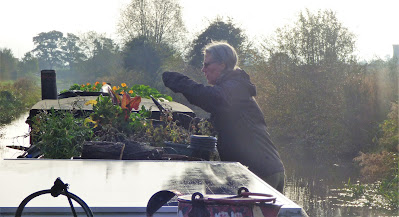 Ann-Marie doing a spot of gardening on the move.
We stopped before the last two locks at Norman’s Bridge. As it was a sunny afternoon Dave got the red bit of the swan neck painted and then, with a sense of closure and a job well jobbed, we walked the mile and a half to Screwfix in Winsford to recover the car.
at November 02, 2022