The lock keeper at the end of the Middlewich Branch was quite surprised when Ann-Marie told him we were turning right and going up the Trent and Mersey. Every other boat he’d let through that morning had turned left and gone down towards the hire bases and marinas in Middlewich and Anderton. The half term holiday marks the end of “the Season” for a good 90% of boaters, and the difference in the week afterwards is always quite dramatic. All the way to Wheelock and up the Cheshire Locks - affectionally known as Heartbreak Hill – we hardly saw anyone moving.

Heading up the T&M toward Wheelock. We only saw one other moving boat all day. 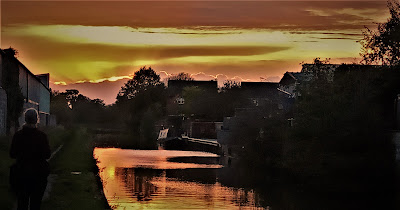 Dave's favourite bridge. You can see it from a truck on the M6, and he did. Often. 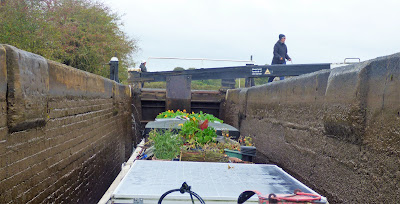 Our last lock on the flight. 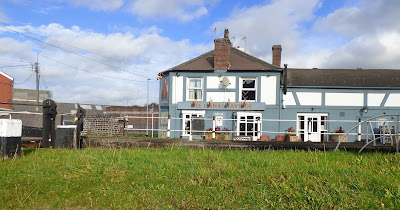 The Canal Tavern at the top of the locks must have been a welcome sight for many a working boater.
Many years ago, before we left the house, we had a weekend helping our good friend Brian with coal and diesel deliveries on the fuel boat Alton. On that occasion we lock-wheeled all of Heartbreak Hill and went through Harecastle Tunnel in one day. This time, with just the two of us and car moves to do, we had a couple of one-night stops on the way up. First, just before Wheelock and then halfway up the locks at Rode Heath. In Kidsgrove we stopped for services, then at the curious Harding’s Wood junction, rather than heading straight on to the tunnel, we turned right, off the T&M, looped round to go parallel to it, then went back over it on an aqueduct and onto the Macclesfield Canal. 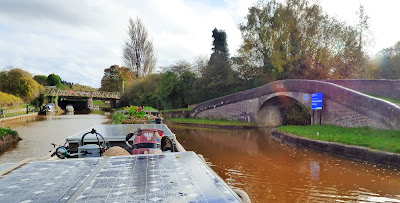 Turning off the T&M onto the Mac at Harding's Wood junction. 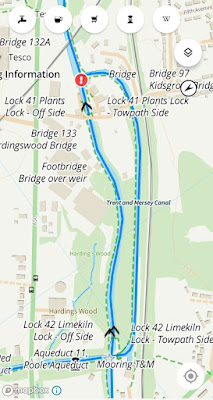 Harding's Wood. Up the locks, turn right, round the loop and back over the aqueduct.
Modern motorway junctions do this sort of 'loop around' shenanigans all the time, but in its day, Harding’s Wood Junction must have been looked upon in awe. Another of Thomas Telford’s engineering miracles.

We tied up just north of Poole Aqueduct, then moved on to Scholar Green the next day. That night was Halloween, and our 25th "Getting Together” anniversary, so we put a pumpkin on the roof, lit a bunch of candles, smartened ourselves up and went out trick or treating. Well ok, no tricks and just the one treat; a very nice celebratory dinner in the Rifleman’s Arms.

Scholar Green was the first time we’d been able to stop for more than one night since leaving the dry dock. Our mission was to get up Bosley locks, between Congleton and Macclesfield in order to get to Bollington where Brian (you remember Brian with the fuel boat?) now owns and runs Bollington Wharf and had agreed to let us leave Legend there while we went to France for an extended stay. Dave had offered to give Harry a hand in the workshop, he'd be doing the day-to-day and general dog's body stuff so that Harry could get a couple of projects finished. Ann-Marie and Frankie were both looking forward to a lovely long spell with Thibault and Axelle, but the whole thing hinged on getting the boat somewhere safe. The Bosley flight had been closed due to water restrictions since early on in the summer, but CRT had allowed bookings for boats to get back to marinas and winter moorings during half term. We hadn’t been able to get there in time for that, but our hope was that if we got close, and they allowed more passages, we’d be ready. Naturally, although CRT couldn’t commit to any future promises, they were constantly monitoring the situation. After half term, Karma stepped in and had a word with the rain gods, leading CRT to declare that there had indeed been sufficient rainfall to allow for continued passages up and down Bosley, albeit only three days a week. So, Cinderella, you shall go to the ball. Our plans would work, Legend would be safe and sound, and we could have a lovely long family holiday in the south of France.

For the time being though, we could breathe a sigh of relief and slow down long enough for the blue tits to find our bird table.