Our week in Loughborough started with a hilarious Eurovision party next door.

Bob and Mandy had strung the flags of all nations inside Matilda Blue and we had a sweepstake so that each of us had two countries to cheer on. When our chosen song was being performed we waved our flags and passed round country themed food and drink items (some liberal imagination was used for this; what do Lithuanians eat and drink anyway?). There was a prize for the highest scoring country, which Ann-Marie won with France, and all in all it was a roaring success. Unlike the UK entry, of which the less said the better.

The following day we all went to the recently re-opened and very interesting Charnwood museum in the town and had a coffee in the little café. We learned Ladybird Books used to be printed here, and all about the history of lace making, renown for the Luddite revolts as it moved from cottage industry to mass production in the mills, as well as the history and geology of the district. We still had to wear face masks and only a few people were allowed in at a time, but sitting round a table and chatting made it feel like things really were starting to get back to normal.

There was rain forecast for the next afternoon, so we decided to have an early start and go for a walk up Beacon Hill. However, the rain had a different definition of ‘early’ and caught up with us just as we got to the country park. The map at the entrance showed a 50 minute walk up to the top and back down to the café, so we figured that as we had our coats on we could do 50 minutes in the drizzle without too much bother. Only it wasn’t drizzle. And the 50 minutes was measured by Usain Bolt. By the time we got to the top the rain was horizontal and we were decidedly moist. 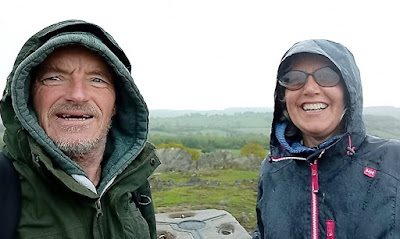 Dave said “Was that a lightning flash?” Ann-Marie said “I’m not sure, I didn’t hear any…” and the rest was drowned out by an almighty thunder roll that seemed to go on for ever, accompanied by even more rain. It didn’t let up all the way back down to the bottom, by which time we were both soaked through to our pants. In the little café, we stripped off as much of our sodden clothing as common decency would allow and draped it over the chairs round a thankfully spare table. Then, along with other equally sodden walkers, we hugged our coffees and gently steamed while outside the clouds parted and a very smug looking sun came out. We were sure we heard it laughing.

The Great Central Railway goes from Loughborough to Leicester and trains had just started running again, so we planned a walk across the fields to hopefully coincide with one of them. Bob came along with us and the timing almost worked; although we saw it emerging from a cutting, we were just a minute or two too late to actually be on the bridge when the train went underneath. 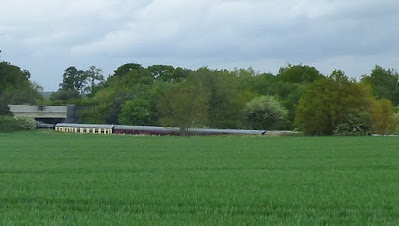 We could have waited on the bridge for 45 minutes for it to come back, but walking to Quorn and Woodhouse station, where we could sit outside with a cream tea and watch it pull in seemed a much more civilised option. 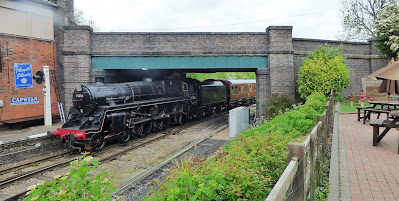 To say we were impressed by the attention to detail of the station platform and the splendour of the train when it pulled in would be a massive understatement. It was all so perfect, from the beautifully restored rolling stock in the yard, to the immaculate uniforms of the Station Master and his staff. We truly felt transported back to the 1940s. 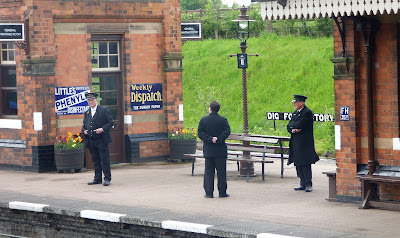 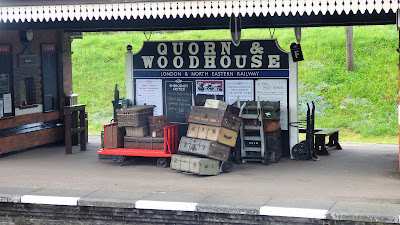 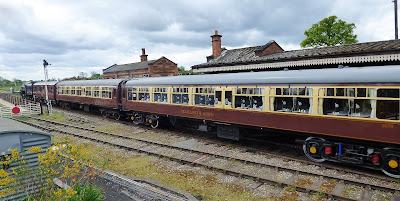 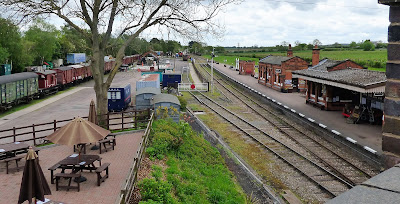 Just as we finished our tea, the train pulled out on it's way to Leicester.
A wonderful spectacle to finish off a brilliant day out. And the cream tea was lovely too.

Things had been rather emotional that week. We’d learned that Dad had gone into hospital for a couple of days after a blood test and we were really worried about him. We’d already planned to take the car down that weekend to fit the new radiator, so we brought it forward a couple of days. When we arrived it was good to find him back home and looking better than we’d expected; he still had more tests to follow, but thankfully the Doctors were on top of it and he would soon be on the mend.

Outside on the drive, Dave soon had the new radiator in. Every time he does anything to our ageing Kia he always finds himself impressed by how much thought has gone into the design of the thing to make working on it simple and straightforward. He cut his teeth on the 1970s offerings from Ford and British Leyland where every small mechanical problem involved squirming about in the floor and the disassembly of half the car. During our 2cv years (we met through the owner’s club) the simple, minimal and easy-to-get-at mechanics of little air-cooled Citroens made a nice change, and the need for constant tinkering to keep them going was all part of the fun. However, since we’ve been boating we’ve purposely had a succession of unobtrusive invisible hatchbacks that we can leave parked on an urban street without worry, but it means that even with the increasing reliability of modern cars, Dave still sometimes finds himself squirming about on the floor, the starter motor on the Astra being a prime example. (You can read all about that here.) The Kia is a complicated turbo diesel, with an inter-cooler and air-con and absolutely no free space under the bonnet. It looks daunting, but somehow they’ve made it accessible. 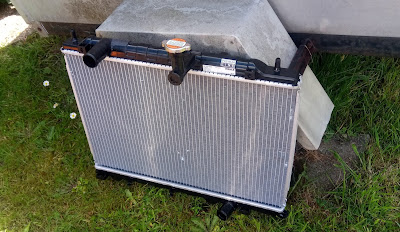 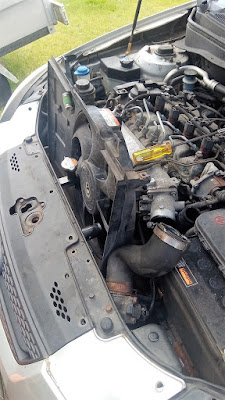 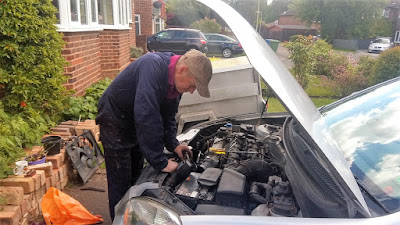 Everything is easy to get at. No squirming on the floor for this job. 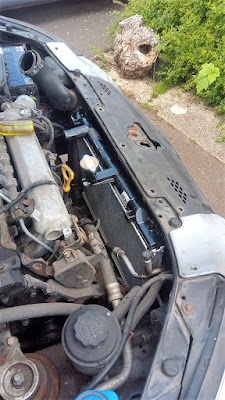 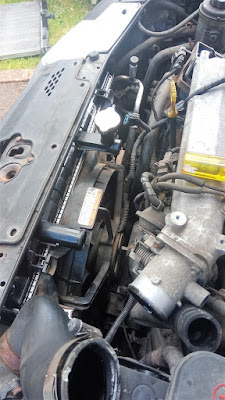 Fan back in and  nearly done.
On our way home we stopped off in Wallingford to join in with the launch party that Steve was having for his new venture into the boat hire business. With a bit of Dave’s help, over the previous few months Steve has been getting Nb Barking Mad II ready for hiring out for holidays on the Thames.

Originally a plugged-in live-aboard boat, Barking Mad II needed a lot of changes to make it a holiday home for 6, plus all the additional requirements of commercial Boat Safety Scheme. That had meant installing a second alternator and solar panels, re-wiring the batteries, lots of painting, adding non-slip coatings to the gunwales, fire escape signs, converting the central heating pump to 12v, and the biggest job, which was converting the toilet from cassette to pump-out. We had a barbecue on the riverbank in the company of all our old Wallingford mates, got very drunk and stayed over on Andelanté.

In the morning we walked up the towpath, past ‘our’ mooring, to have a look at Ruth’s new 45’ tug.

What a lovely little boat; just perfect for one and such beautiful lines. After that we had a cuppa with Colin and Julia on Smith’s Lady before coming back to Legend.

We really didn’t expect to enjoy Loughborough as much as we did and we were quite sad to leave. It’s an honest little unpretentious market town and we felt happily at home there. There is a restored basin in the town, but although it is nicely presented with landscaping and mooring pontoons it is surounded by high rise buildings and very close to the town pubs, making it a bit of a numpty magnet. Most people go in there for services then, as we did, moor just before the junction bridge.

With Matilda Blue behind us, we boated down the rest of the canalised section to Bishop’s meadow lock, where we breasted up and filled both water tanks (at another slowest tap ever) then rejoined the river down to Zouch, (pronounced Zotch) as the sun came out.
We hovered in the river to allow the little chain ferry to make it’s crossing... 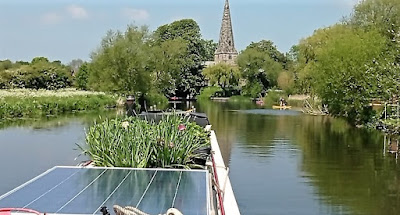 ...then carried on through Zouch lock... 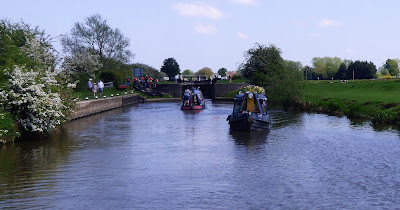 ...to Devil’s Elbow where we pulled in for a couple of days of sitting outside in the sun and bank-side barbecues. 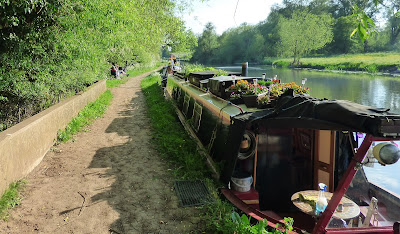 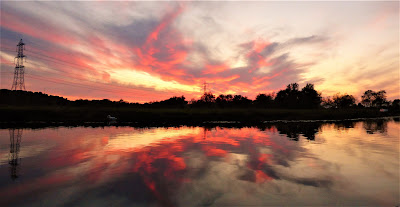 We did manage to drag ourselves out for a car move from Zouch to Kegworth, including a trip to Shepshed for Ann-Marie’s second jab. We met Bob and Mandy in Kegworth and had a very enjoyable pint or two in the Red Lion before walking back to the boats.

Next morning we were off to Trent Lock. More lovely sunny boating down the Soar with a quick stop at Kegworth flood lock where the car was parked to transship the shopping out of the boot. 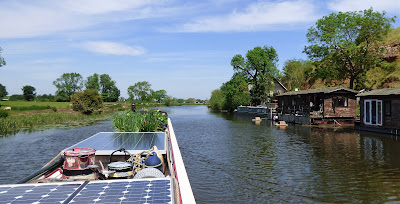 At Ratcliffe lock we had to wait while a boat below the lock got pulled off the sandbank by the lower lock landing. The sandbank was well known by local boaters, and was due to be dredged, but there were no warnings for the unprepared, apart from a small, worse than useless notice that you couldn’t see from more than 3 feet away, saying “Danger - Shoals” stapled to one of the upper lock gates. A fat lot of good that’ll do you when you’re pushing your way up to the downstream lock landing!

On we went down the last bit of the lovely River Soar to the mighty Trent. Matilda Blue was way ahead and as we approached the mouth of the Soar we could see them turning into the entrance for the Erewash.

There were several 48hr mooring sites around Trent lock; a floating pontoon on the river, some bankside moorings at the beginning of the Cranfield Cut, and some visitor mooring bollards on the first bit of the Erewash. We ploughed our way accross the river and followed Matilda Blue into the entrance... 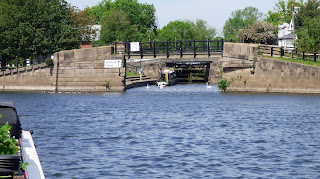 ...then joined them in the lock. just above the lock is a services block, followed by the moorings where we tied up for a few days.

Being at Trent Lock is a big nostalgia rush for Dave. Half a century ago, along with his mate Mick, he used to cycle here from Spondon on sunny weekends such as this. They’d mess about and ‘help’ with the lock and generally get in the way, and it’s where he first caught the living-on-a-boat bug. After 10 years on board Legend and after travelling round most of the network, it feels slightly surreal to finally be here.