Birstall was a fantastic place to be moored, especially as we were there with Bob & Mandy and the third lock-down was just beginning to ease up. And especially as Leicester City managed to win the FA Cup while we were there! The first we knew about it was a bunch of blue and white clad young lads dancing along the towpath in their socks (why socks?) just after the final whistle blew. We are far from being anything remotely resembling football fans, but we must admit that being moored in a city in a buzzing party mood was quite exciting. We rode into the city on the Sunday and it was brilliant to see all the cafés and restaurants full and everyone smiling.

The easing of restrictions meant that we were allowed to hug and go into each other’s boats so we took full advantage of that and had a lovely arm-in-arm walk round the Waterpark (which was so much more fulfilling with an ornithologist)... 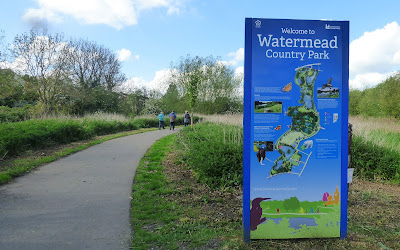 ...followed by a completely impromptu and rather drunken games afternoon.

While B&M were away for their second jabs, we got the bikes out and rode up National Cycle Route 48, winding our way through the water meadows and old gravel workings that make up the huge Watermead Country Park. NCR 48 uses some of the towpath, but CRT had closed it while they put new piling in, so we had to do a bit of a detour on the road. Never mind, it was a very nice bike ride and we’re really happy with our new seats.

The weather in the middle of May was dismal. Every morning we listened to Alex Deakin from the Met Office as he tried and failed to find something encouraging to say. Phrases like “Unseasonably low  temperatures”, “Widespread showers” and “Areas of low pressure” were beginning to grate, and although our daily walks took us past hedges that were now awash with beautiful May blossom, the only sign of clout casting has been Dave stubbornly wearing shorts despite having purple knees most of the time.

Ann-Marie got a photo sorted and got her passport renewal application in the post. We had a good deal of grumbling about a ten year passport lasting less than 9 1/2 years. We can perfectly understand why you need to renew six months before the old one runs out, but surely the new one’s expiry date should be ten years from that of the old one, rather than from when you apply; anything else is a blatant extortion. And advising you to do it ten weeks before that ‘in case of delays’, then sending it back within one was just rubbing salt in.

We picked one of the better weather days and moved the boats up to Barrow-Upon-Soar. 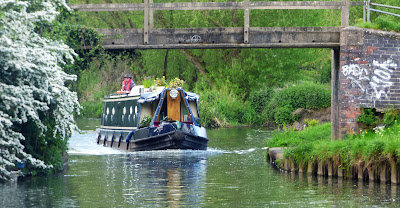 We stopped at  the Hope and Anchor at Syston to fill up from the well hidden water tap. This was where we'd had to do a detour on our cycle ride, so we got to see what the towpath closure was all about. 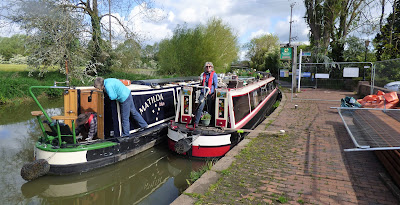 Boating past the work boat. They kindly stopped the piling hammer as we went past. 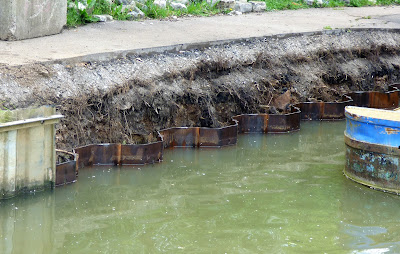 This heavy duty piling will stop the towpath collapsing.
Bob and Dave had done a car shuffle the previous afternoon and had recced the moorings, so they knew not only where we were going to end up, but also that the Navigation Inn did a nice pint of Woodford Wherry.

It was a glorious day, the only bit of rain turned up at lunch time just as we got to Silbey lock, so we were able to batten down for lunch and stay dry. Matilda Blue needed diesel and a pump-out, so just below the lock Bob pulled alongside the services barge at Sileby Mill Boatyard, while we carried on to Barrow. 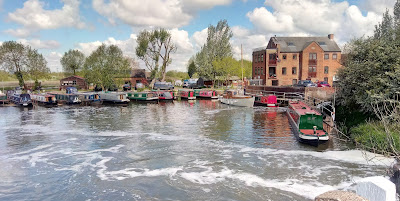 Wherever we moor up, if there’s a hedge by the towpath, we like to put our bird table up outside the dining room window. It’s nothing fancy, just a bit of old plywood on a pointed stick with a couple of feeders hanging off it, but the birds don’t seem to mind. In more remote areas it can be two or three days before we get any visitors, but if it’s a well used mooring we’ll often see a brave little blue tit or robin coming to investigate within a couple of hours. At Barrow-upon-Soar it only took half an hour before something was perched on top of out rickety little table having it’s dinner. However, that something was a big fat squirrel, with his equally fat friend waiting on a branch behind him.

As we watched, the equally fat friend got tired of waiting and attempted to join in. At that moment, as if it wasn’t exciting enough already, a spaniel turned up. Supporting leaping squirrels was never part of the bird table design brief, and their panicked exit sent it flying, scattering fat balls, peanuts and sunflower seeds all over the towpath. Realising that squirrel was now off the menu, the spaniel settled for the fat balls instead and gobbled all three of them up before his owner arrived, no doubt making life interesting back home for the rest of the afternoon.

When we parked our car in the car park at Barrow, Ann-Marie noticed an ominous wet patch under the front. Dave had been aware that the coolant had needed topping up more frequently of late, and closer inspection revealed a dripping radiator. A search on Youtube told us that it wasn’t too difficult, but we’d need somewhere flat, so we arranged to get a new radiator sent to Mum and Dad’s and to go down there and swap it out on their driveway.

The incessant rain and worrying about the car was getting to us a bit, so to take our minds of it all we invited Bob and Mandy round for a dinner and a games night. We taught them how to play Skip-Bo, which we first came across whilst visiting Dave’s cousins in Australia, and as Matilda Blue carries an Aussie flag, we though it only fitting that they knew how to play. It was a brilliant evening and gone midnight by the time we got to bed.

Over the next couple of days we had a re-think about our moving plans so that we had somewhere we’d be happy to leave the boat while we went down to Mum and Dad’s. Being on a volatile river adds an extra element into the calculations, but at least travelling with friends means that when we get back we don’t have that worrying few moments just before rounding the last bend in the towpath.

Our trip from Barrow to Loughborough got off to a rather exciting start. Although there was a green light on the lock, the recent rainfall had increased the flow quite considerably, something which experienced navigators would automatically allow for when leaving a lock and re-joining the main river. Dave keeps forgetting that although he’s been on rivers several times, most of his experience is on non-moving canals so he really should pay more attention at times like this and not just expect his instincts to tell him what to do. Needless to say, it all went a bit wrong; there was an arched bridge just after the confluence...

View from the lock landing. The river flows left to right under the bridge.
...and we were extremely lucky that there was a set of very sturdy guard rails in front of it which Legend hit - and for a heart stopping moment tried to climb up - but which stopped us being swept sideways into one of the bridge piers. 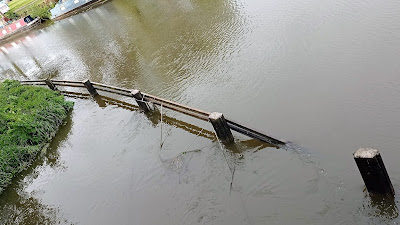 The guard rails as viewed from the bridge. 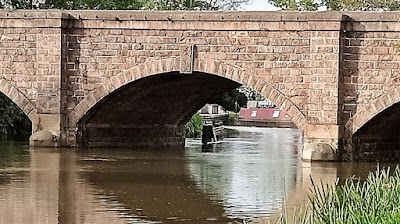 The very hard looking bridge and the equally hard guard rails.
We still don't know how we came through there in one piece.
More by luck than judgement we made it through the arch with everything still on the roof, nothing broken and even our paintwork unscathed.

A bystander on the bridge, who’d witnessed the whole debacle, managed to shout a warning to Bob in time for him to take a much wider swing at it, and Matilda Blue popped through the arch with no worries. Sweet as.

While Dave tried to get his heart rate back down, Ann-Marie went below to see how our cabin had faired, but apart from a melon that had left the fruit bowl and rolled down the full length of the boat, we’d gotten away with it. Just the bucket full of adrenalin to get rid of.

Immediately before Pilling’s flood lock there was a big sign that said if the red light was flashing boats shouldn’t proceed. It was a bit of a nonsense because there was nowhere before the sign to either turn round or stop. Our only option was to go 50 yards past it and stop at the lock landing which, even though the (very small) light was indeed flashing, is what we did. Of course, once we were out of the flow and on the lock landing, we couldn’t see any reason why we shouldn’t then go through the lock onto the nice, safe, sheltered canal section, so that’s what happened. We spent the rest of the trip chugging gently and - we’re happy to say, uneventfully - down the last couple of miles of the Leicester Navigation to where it meets with the Loughborough Navigation, mooring up just before the junction. Bob and Mandy carried on down into Loughborough Basin to use the water point, then came back to tie up with Matilda Blue and Legend nose to nose. 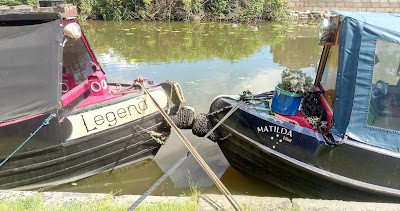