Hoping for a mooring, we moved the car to the common which lies between the Ferryboat Inn and the river in the lovely medieval ring village of Holywell. All the available mooring spaces were occupied, but as we weren’t coming back for a couple of days there was a good chance it could all change.

In the morning, as we approached Hemingford, we spotted two woodpeckers sitting on the fence – what a treat! To be fair, the woodpeckers were already spotted (to a greater or lesser extent) before we got there, so we really can’t take all the credit, but we did see them.

We crawled down the river towards St Ives, looking for the upstream entrance to the Wakes. We did find it, but it had obviously been unnavigable for a while, all overgrown, weedy and hardly visible. That meant that if we went in from the other end we’d have to back out, so instead we carried on to the Dolphin. We did a reasonable reverse into the arm and tied up on the pub side. A little while later a boat moved off from the other side and we thought it would be a good idea to shift over. It wasn’t. With an almost perfect demonstration of how to simultaneously fail at both boat handling and communication we got ourselves diagonally across the arm with the wind against us. We then had to endure the humiliation of a chap off a Tupperware boat pulling us in. Oh, the shame. 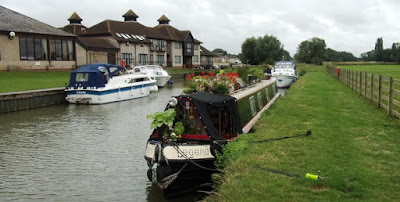 That evening we were treated to another fantastic St Ives sunset. 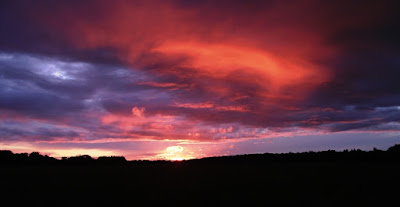 Although it was raining the next morning, the forecast for the afternoon was better, so after catching up with catch up we set off under the chapel bridge and downstream to St Ives lock. 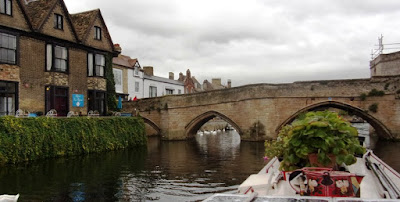 As we approached the lock it became apparent that everyone else also had the same idea; the river suddenly filled up with boats from every direction and we just managed to snuck onto the end of the lock landing. While we were waiting another three narrowboats turned up. There was a lot of hovering and circling but in the end we managed to get all four into the lock together. 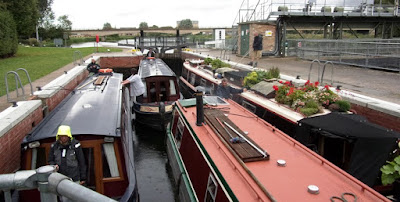 When we got back to Holywell the mooring situation hadn’t improved in our favour, so we retreated to the very lumpy GOBA site next door where we deployed the gang plank. 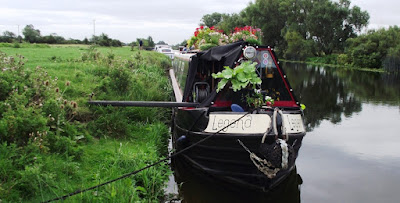 We had a fourth and final attempt at visiting Houghton Mill before it - and its tea rooms – closed, and managed to get there with an hour to spare. After a quick tour of the mill and a cuppa we bought two bags of their very good wholemeal flour and went back to the boat. 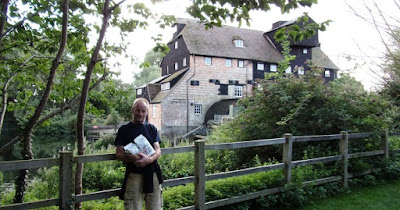 By the time we got there we’d also collected some blackberries and apples so a celebratory crumble was almost inevitable.

Diane came for a visit the following morning. There was baking followed by boating to and through Brownshill Staunch accompanied by Kingfishers and Grebes, then a trip on the tidal stretch where the seals were still happy to make an appearance.
This time we were the ones hovering and circling as we waited for the lock. Brownshill is one of several locks on the Ouse with rubbish dimensions. At thirteen feet it’s wide enough to throw you about, but not wide enough for two narrow boats to go in side by side, and at ninety feet long there's plenty of room for the water to slosh back and forth, but not quite enough for two full sized boats behind each other. It’s a bit annoying to say the least. We try to make the most of the situation by allowing boats that can fit in to jump the queue, an offer that invariably surprises them. We’re also happy to work a lock while we’re waiting so other people don’t have to climb the ladders. It quicker and safer for everyone involved but hardly ever seems to occur to anyone else.
The protocol on rivers is quite often “I’m alright Jack.” It can be frustrating when you come from the canals where crews are so desperate to help each other that too many cooks often spoil the best laid plans of captain and crew, and you regularly see a little crowd of boaters standing round a lock enjoying what we light heartedly refer to as a Windlass Party.

We took Diane seal spotting up to Earith, then turned round and went back to Brownshill. There was another period of hovering, which was easier as we were nose into the flow and the wind, then we worked Legend through the lock and stopped at the very peaceful GOBA mooring just above it. 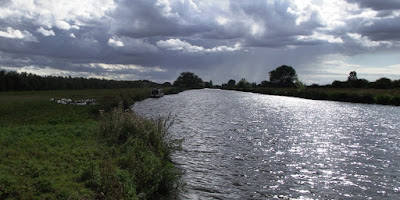 We walked back with Diane along the flood bank... 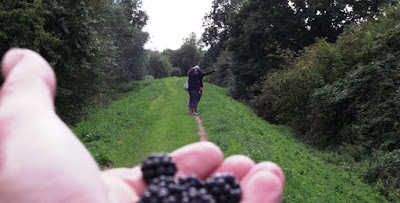 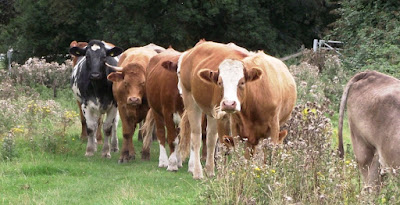 ...to the Ferryboat where the cars were parked and had a very refreshing half of Rumrunner in the beergarden. We were tempted to stop for dinner, but somehow resisted.

Bright and early next morning we were back through Brownshill and moored on the floating EA pontoon outside Westview marina, exactly as we’d planned. We wanted to be there because we were off in the car to join Martin and Yvonne on board Evolution for the weekend at the IWA Northampton Festival of Water, and leaving Legend on a floating pontoon meant we knew it would be ok.

At the festival, after finally finding Evolution moored four boats out from the bank, we had a happy reunion with Martin and Yvonne... 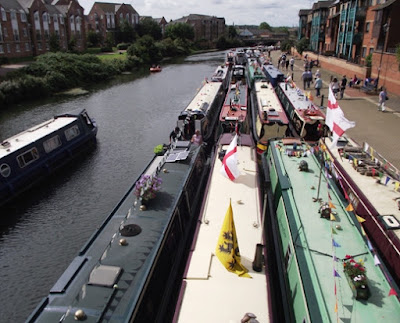 ....then we all went off to watch the Opening Ceremony, expertly performed by these two lovely people.. 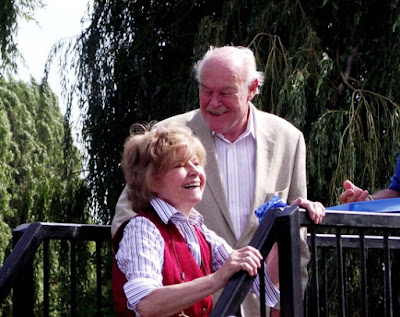 then followed the crowds into the grandly named Island Marqee for the quiz night. (We’d hoped it was going to have palm trees and a coconut strewn beach, but it just meant it was on the lock island.) We teamed up with Colin and Jane and their grandson Max from Nb Slow Gin and between us we pretty much cleaned up on the first three rounds. Round one was Pictures of Northamptonshire Waterways- Martin and Yvonne’s speciality. Round two was Films – It’s got to be very obscure for us not to have seen it, and round three, believe it or not, was Fenland Waterways! There were another three rounds after that; Art and General Knowledge brought us back down to earth a bit, but in the final count our team managed a very respectable fourth place, only four points behind the winners. Hurrah!

Saturday at Northampton was filled with excitement. In the morning we had a stroll round the town, followed by delicious cheese and biscuits on Evolution’s back deck while we watched the boat handling competition. We didn’t really understand what the objective was, but there was lots of reversing, most of which seemed to be aimed at a fender hanging from the footbridge. Anyway it was all very entertaining; right up until Yvonne got stung on her foot by a wasp. Unfortunately she’s allergic, so we thought it might be Epi-pen and ambulance time, but luckily the wasp hadn’t had time to get a lot of venom into her, and after a lie down she was soon feeling better.
Later on we attended a very interesting talk and slide show in the marquee about Sonia Rolt and the Idle Women – the waterways equivalent to the Land Girls in the Second World War. We already knew a bit about the subject, but it was fascinating to find out more.

After tea we were back to see Grandma’s Wooden Leg; a 60’s/70’s cover band, who were very good, but deafeningly loud, forcing us to retreat outside.
The music was followed by a raffle so while they were selling the last of the tickets we perused the prize table. Among the usual bottles of wine, bath salts and (because it’s a boaters raffle) tins of stern-gland grease, there was an innocuous looking envelope which, on closer inspection, turned out to be a £50 chandlery voucher. When the draw started the first ticket out belonged to a woman who leapt up, ran over to the table and grabbed a bottle of rosé; obviously not a peruser of prize tables. The next one was number 7, which was Dave’s! There was much celebrating, and we are now trying to think of something significant to buy to commemorate the occasion. We know that a chandlery is more than capable of swallowing £50 without trace, and Dave would  quite happily spend it all on rope that we don’t need, so much thought will be applied before we go anywhere near it.

That weekend Large Marge, with Laura and Alison on board was moored at Oundle. They had hoped to get to Northampton in time for the festival, but things hadn’t gone to plan and having discovered that there wasn’t a practical means of getting there via public transport, they’d reluctantly resigned themselves to not attending. That was until we offered to give them a lift. So, on Sunday morning, Dave whizzed off to Oundle and came back with two very happy Margees. We introduced them to Martin and Yvonne then we all had a lovely day looking round the stalls, eating Yvonne’s very tasty scones and polishing off the rest of the cheese and biscuits.
In the afternoon there was another talk and slide show; this time on Fenland rivers. We were quite surprised that after a whole summer living on them there was still an awful lot that we didn’t know. After that we said goodbye to Martin and Yvonne, although it wasn’t that sad as we were seeing them again a week later for a ceilidh in Whittlesea.
We drove the Margees back to their boat at Oundle marina, where we met Jaffa the parrot and they treated us to a takeaway from the Indian. Jaffa was very impressed with Ann-Marie and sat on her finger for most of the time; less so with Dave, who was completely ignored.

And they say parrots are a very good judge of character. Huh!