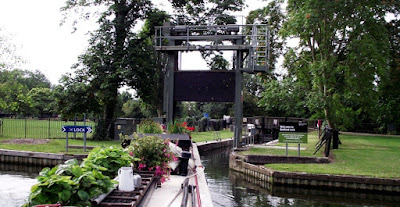 Once we’d turned round in Bedford we felt a subtle change to our boating as we went from ‘Adventuring into the Unknown’ to ‘the Journey Home’. We’ve felt that way before; coming back down the Lancaster and the Yorkshire Ouse for example, but this is the longest return trip we’ve made so far and, quite possibly the longest we’ll ever make. We tried to leave one or two spots unvisited on our way to the end to give ourselves some new moorings going back, so after dropping through the deep and scary Castle Mills lock... 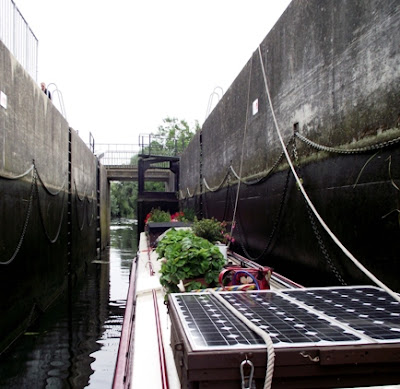 ...our first night was at Barford Old Mill, which Lindsay & Paul know as Eel Island and had insisted we stop at. If they hadn’t told us about it we’d have missed it. It’s on a back-water and used to be navigable all the way round to an old basin where you could turn just before the site of the old lock, but there’s a fallen willow after the first hundred yards or so now, and it’s all overgrown and silted up beyond that. We did a neat little reverse in and tied up. In the afternoon we walked from there to Willington Dove cotes and Stables (NT)... 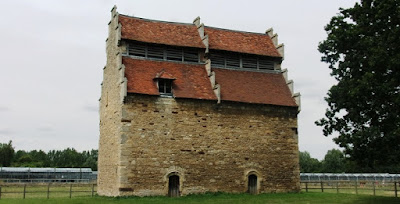 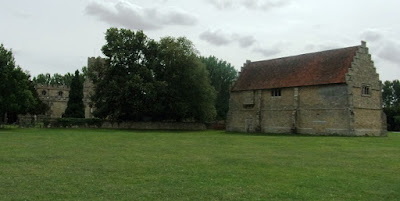 then had a cup of tea at the Danish Camp on the way home. 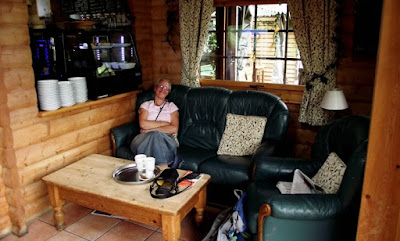 The next morning Legend was outside the Anchor at Great Barford again, and we were piling our stuff into the car again. This time we were off to Fleet to spend the day with Mum and Dad. It had been a long time since we’d been down there and at 1½ hour’s drive it was about the closest we were going to be for a while. There was the added incentive that the new front wheel bearing for the Astra had been sitting in the boot for two months by then and it was getting to the stage where we couldn’t hear the radio. And their drive just happened to be nice and flat. And Dad just happened to have a trolley jack and lots of tools. And a mate called Brian who had a lot more.

While Dave and Dad tackled the bearing, Ann-Marie, Mum and Auntie Wendy all went for a walk in the park, then later on Karen, Andrew and Lauren came over and we had lovely family evening. We got back to the boat quite late after a lovely, quiet, drone free drive. It was forecast to be the best night for meteor watching, so we spread the picnic blanket on the village green outside the boat, made some hot chocolate, put our big camping jumpers on and lay down to watch the shooting stars.

We had a couple of days back at Eaton Socon island where we replenished the firewood pallet and went for a lovely long walk back to Great Barford... 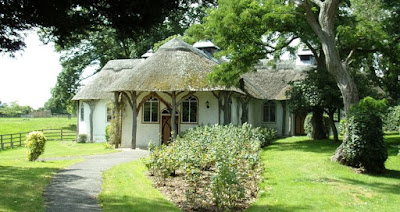 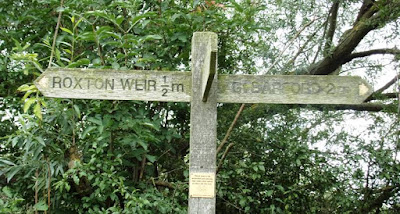 ...which involved a lot of nettle bashing and a very respectable haul of damsons, blackberries and hazelnuts. Eaton Socon has this curious little building... 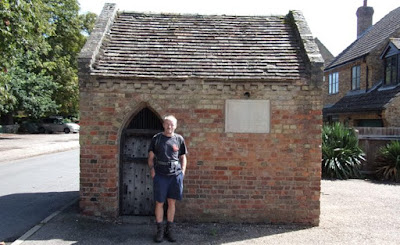 which turned out to be the jail, where miscreants were locked up overnight, or at least until they were sober.

The following morning we had a quick nip into Tesco for some gin to go with the damsons, then set off through Eaton Socon lock, where we stopped to empty the loo, and on into St Neots. There was just about enough room for us to moor up on the park side, opposite the Priory Centre. 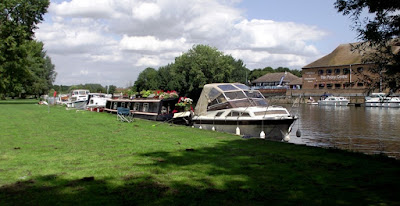 Half an hour later a whole bunch of other boats turned up looking for somewhere to stop, so we were lucky we got there when we did. At the weekend in the summer it’s very much every man for himself.

There was a brass band playing in the park so for the third time this year we sat and listened to music in the open air on a Sunday afternoon. After that Dave made a mini basket to go with the one he made in Bedford which turned out quite cute. 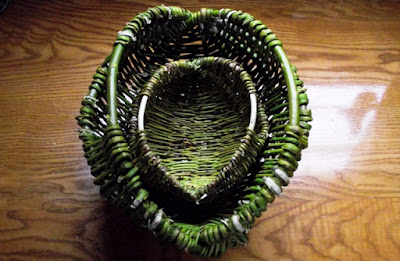 We got the bikes out the next day and moved the car to Offord lock. On the way home we found a fabulous damson tree and filled the panniers, which Ann-Marie soon turned into delicious jam... 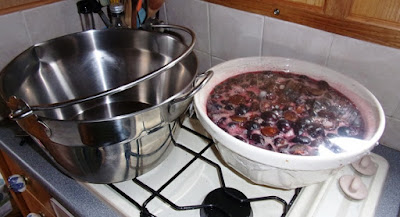 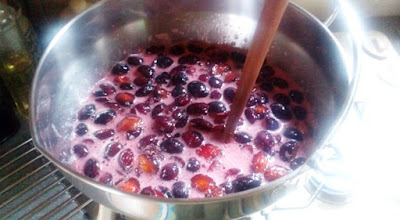 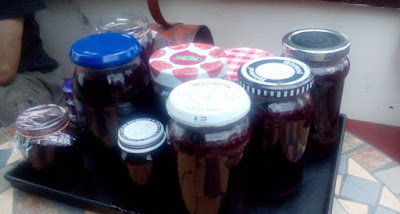 ...then in the evening Anne popped in for tea and a post delivery on her way to somewhere southern. After she left Ann-Marie made a chocolate cake; we had visitors coming in the morning!

At about 11 am Sarah, Neil and Grace arrived. They’d never been on a narrowboat before so they were all very excited, and we were equally excited to have them on board. 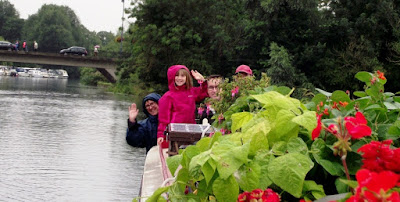 After a tea and a scones we set off for Paxton Pits where we’d planned to stop for lunch and where we had thought we’d have a walk around the nature reserve and the visitor centre. However it rained pretty much all day, which kind of scuppered that idea. In fact the only time it stopped raining was when we were inside the boat having lunch. Typical.
Boating in the rain was ok as it wasn’t that cold, but by the time we got to Offord and got pinned and planked on the GOBA moorings we were all wet through and the enjoyment factor was getting a bit thin. We put some of our newly collected firewood to good use, lit the squirrel and dried ourselves out. Later on we all piled into our car and went back to St Neots where we hit ‘Spoons for a steak night. A fabulous day with lovely people; hopefully  they’ll come and visit again.

We stayed at Offord another night which gave us the chance to walk back to Paxton Pits and have a look round the reserve. We had a cuppa in the visitor centre and spent time in some of the hides. As well as discovering Cormorant Island...

...a very kind lady pointed a kingfisher out to us and lent us her binoculars to have a closer look. 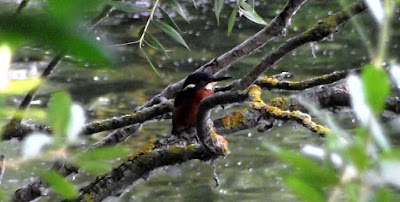 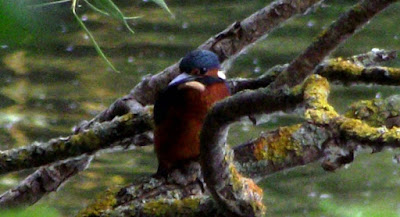 We’ve now got ‘new binoculars’ on our wish list, along with ‘new camera’.

Thursday morning was very exciting. We had to be awake at 6:30 to listen to the Chris Evans Breakfast show. Here’s the background story:
Dave’s cousin John has a daughter called Hannah. Hannah and her friend Abbe make up a band called the Sound of the Sirens. The Sirens played at Glastonbury earlier on this year, on the back of that they played at Carfest, on the back of that they played at an Open Mike Night in Chris’s pub and on the back of that they were BBC Radio 2 on Thursday morning, singing their hearts out and broadcasting to nine point something million listeners across the UK. How fab is that!!! We sat in bed in tears and unable to breath until they’d finished. We don't know how long the link will last but if you'd like to listen to them, click here , press play and move the slider to 01:39.
Later on, when we’d recovered our composure, we moved on to the GOBA mooring at Brampton, just along from the mill, where we positioned ourselves carefully between two wasps’ nests.
From there we did a car move to Godmanchester and walked back across Port Holme Meadow.
We moved round to Godmanchester early on Friday morning and, as we’d hoped, there place was deserted, so we got the prime spot on the side of the park. 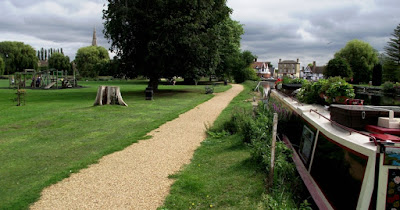 We were really chuffed about that because David & Kate and Dylan-the-dog were coming for a visit and we wanted to be somewhere special. Saturday morning dawned bright and sunny; there was baking and tidying, then a period of waiting due to them being stuck in a traffic jam on the A1.
When they finally got to us we quickly made up for lost time with scones and tea then, as it was such a lovely evening, we had dinner outside in the park. How very English - even though it was Thai Lamb Curry. 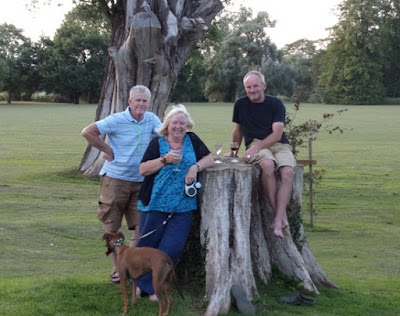 We also watched as boat after boat came up the Godmanchester arm from the lock and cruised past the now full moorings before turning round in front of the Chinese bridge and going off to find somewhere else to stop. We can’t get over how weekend orientated the river is. During the week you can go all day and not see another boat, but at the weekend it’s mayhem.


On Sunday morning, after the boys did a quick car move, we took our passengers on a breezy river trip through the busy Godmanchester and Houghton locks then managed to snap up a mooring at Hemingford on the GOBA site. It was a beautiful warm afternoon so despite the wind we had lunch on the riverbank, before huddling back into the cabin when the rain started.
It brightened up a bit later on, so we all went for a stroll through the lovely village of Hemingford Grey then came back to the boat for dinner. As always, home time came around far too quickly; we never seem to see our friends as often as we should, and we waved goodbye amidst promises of future visits.
at August 25, 2015