After the seclusion of the brick wharf at Wellingborough our next stop at Irthlingborough was a bit of a contrast. There is a length of very good visitor moorings just behind what used to be Rushden Diamonds Football Stadium. 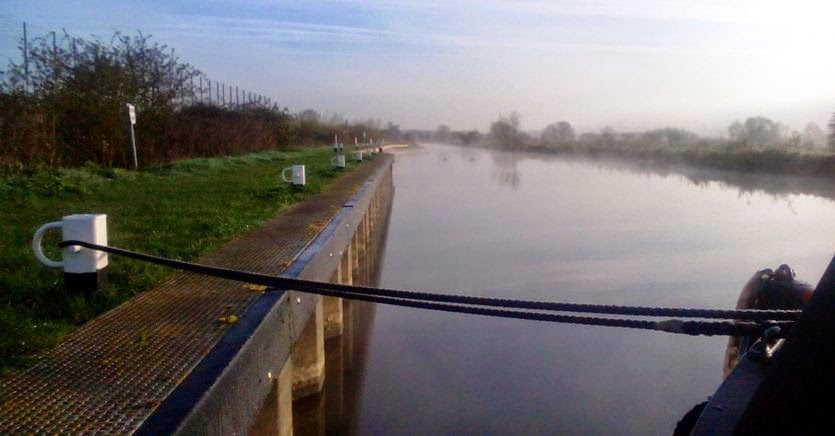 The stadium is still there, along with all the other deserted buildings, but sadly Rushden Diamonds no longer exist. They were sponsored by Doc Marten’s who moved on, taking their money with them. The demise of the club also brought about the demise of the showers that boaters used to be able to access; on top of that we  found that the pump out and water points were closed due to vandalism. However, Irthlingborough is worth a visit,

as is Stanwick Lakes Activity Centre, 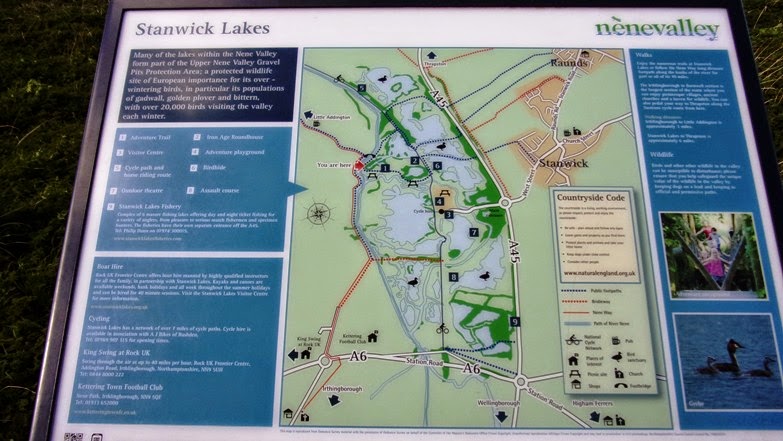 which made us wish we’d brought some kids along. So it’s a good place to moor, but all the stuff in the Imray Guide isn’t there anymore. After breakfast on Sunday, our second day there, we stepped out of the boat to go for a walk only to discover a gigantic car boot in full swing on the other side of the hedge. There must have been a thousand stalls spread over the various carparks and we hadn’t heard a thing!

Our next stop was Islip just before the lovely Nine Arches bridge (we could only count eight). That was a terrific place to be; a little backwater in a corner with a water point and some picnic tables. 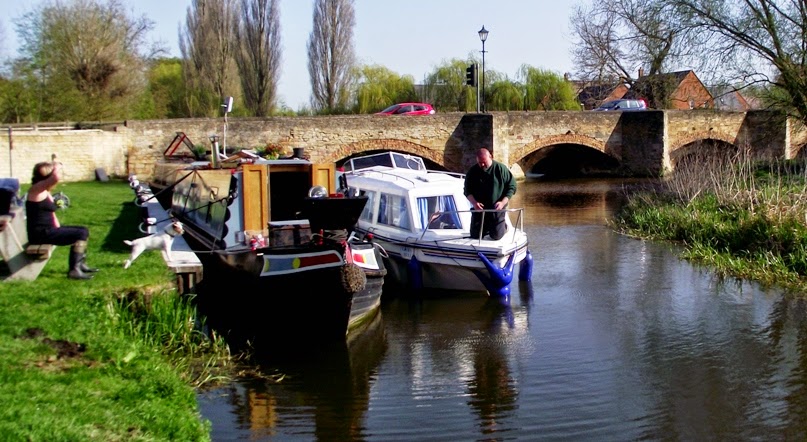 There was another boat already there and there wasn’t really room for both of us, but Kate was very accommodating and let us tie our front end outside of her stern. She also told us about the local swimming pool doing half hour sessions for £1, which we happily took advantage of.
Anne came for a visit as she was passing. She has to visit her head office in Peterborough once or twice a month, and we love to put her up, she’s the perfect boat guest, and only having to travel half an hour to work is a luxury for her.
Since we left Northampton we have mostly been walking the beautiful Nene Way in order to reunite our car with our boat, but from Islip to Irthingborough there was a very handy cycle path. Had either of us actually been on a bike during the previous six months, an hour’s peddling would have been a doddle, instead, by the time Legend finally came into view we were both puffing and sore. Following the line of a disused railway it was fairly flat, goodness knows what we’d have been like if there’d been hills. It made us promise to try and use the bikes at least once a week for the car shuffle; that way it won’t be quite such a shock to the system.
There were lots of footpaths to explore around Thrapston and Islip and after our allotted 48 hours on the Nine Arches mooring we’d still got some we wanted to explore, so we performed the rather tricky reverse back out into the river, went through Islip lock with Kate & Co and stopped on the flood piling outside the sailing club about quarter of a mile further on.

where we moored up on the edge of the King’s Head beer garden. 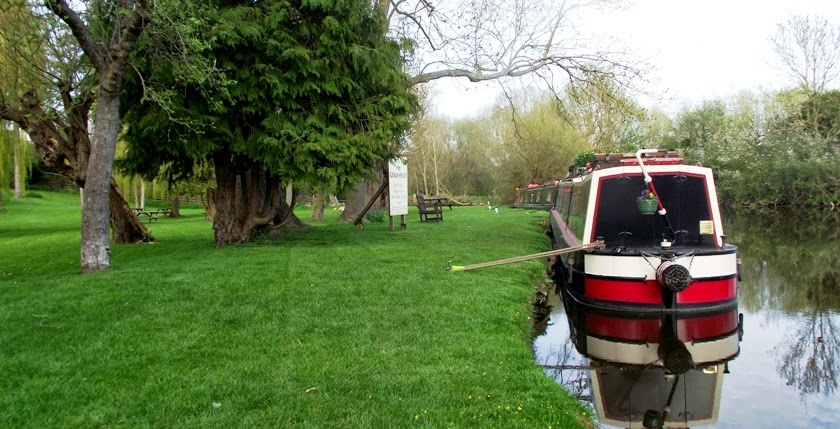 Our old next door neighbours Jon and Jenny came along to see us for the evening along with their son Adam and his girlfriend Mel. After a fabulous meal in the pub, they came back to the boat for a coffee. It was over three years since they’d been aboard and it had changed quite a bit so it was interesting to see what they thought of it.
Wadenhoe has other delightful surprises for the casual tourist. 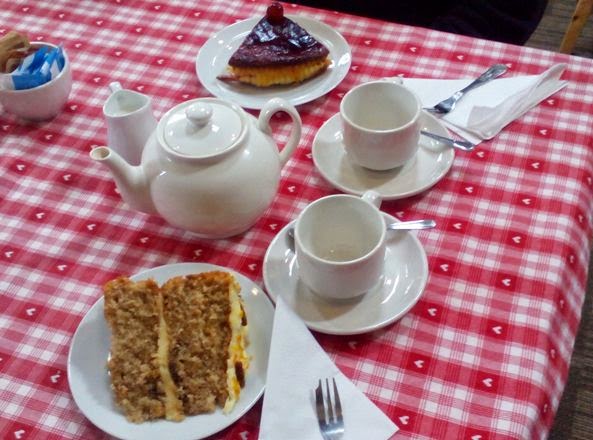 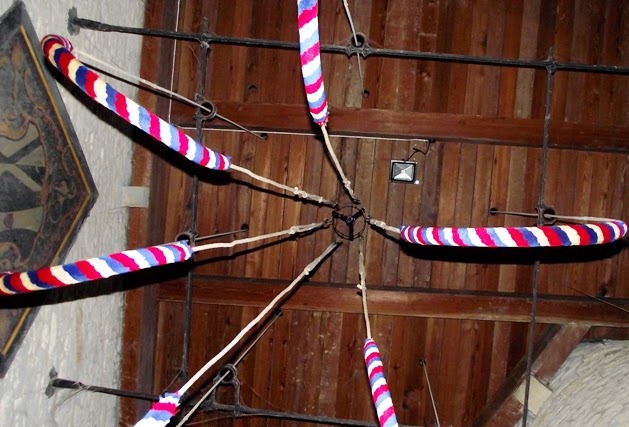 However, on Saturday morning we managed to drag ourselves away and headed towards Ashton lock, passing Oundle Marina on the way. It was a beautiful day and there were a fair number of day trippers messing about on the river in little cruisers, one of which joined us in Lower Barnwell lock where we found out its new owners were not only on their maiden voyage but also in their first lock. We chatted amiably while we went down, hopefully putting them at ease whilst endeavouring to keep our 17 tonne steel brick from squashing their little plastic yoghurt pot, before waving them off down the river. When we got to Ashton we caught them up again; we were mooring up on the backwater before the lock, so we could have gone and helped, but it was one of the non-electrified guillotines and we didn’t want to deny them the experience of turning the big wheel through its 150 revolutions. It’s an important part of river navigation after all.
Ashton lock was another lovely place to be.

The mooring was really quiet, being as it was on a dead end backwater with Oundle a ten minute walk away in one direction and Ashton ten minutes in the other. Ashton is amazing. Every house is thatched, all the front doors and timberwork are the same colour and that beautiful honey coloured building stone is everywhere. So are the peacocks.

David was in Peterborough to see his mum, so he came for tea on his way home, and Mum and Dad were up near Corby for car club business so we met them in outside the Chequered Skipper pub for a chat and a cuppa before they went home.

When we walked back for the car we went through a culvert under the A605. 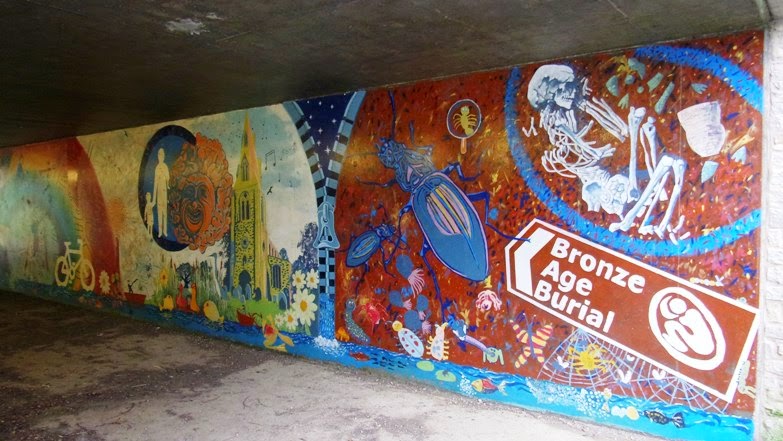 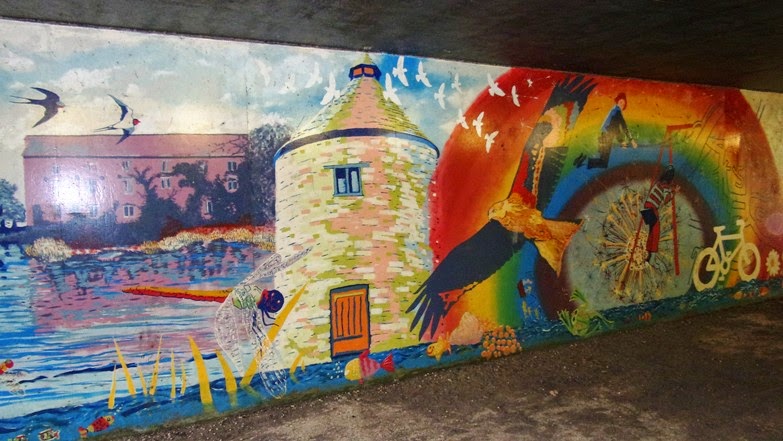 All those trucks and commuters that hurry down this road every day have no idea that this fabulous piece of art is just a few feet below their wheels. How many of them would care?

When Ann-Marie worked in Peterborough over 11 years ago she made friends with Diane and they kept in touch after she left. Diane has always said she’d come and see us when we got closer, so we were really pleased when she did. She came aboard for the day when we moved from Ashton; we took her through Cotterstock and Perio locks, past Fotheringhay, and through Warmington lock to moor up on the bank just before Elton.
Diane is a keen walker and these were all places she knew well, so she gave us some local knowledge of where we were as we drifted by, while we gave her a different view of the familiar.

As we got further down the Nene Valley the Northamptonshire villages just kept getting better and better. The mooring at Elton was absolutely idyllic. There were beautifully atmospheric misty mornings 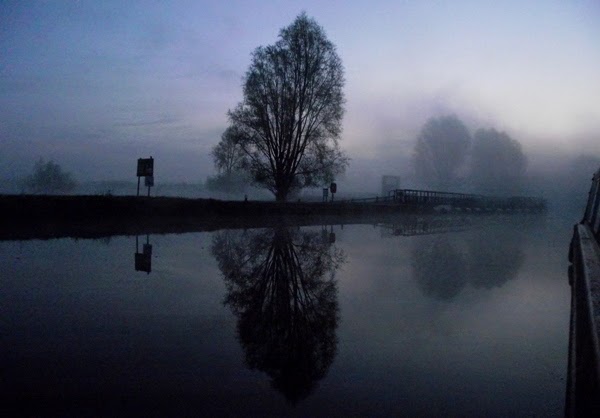 And every night we were treated to another stunning sunset. 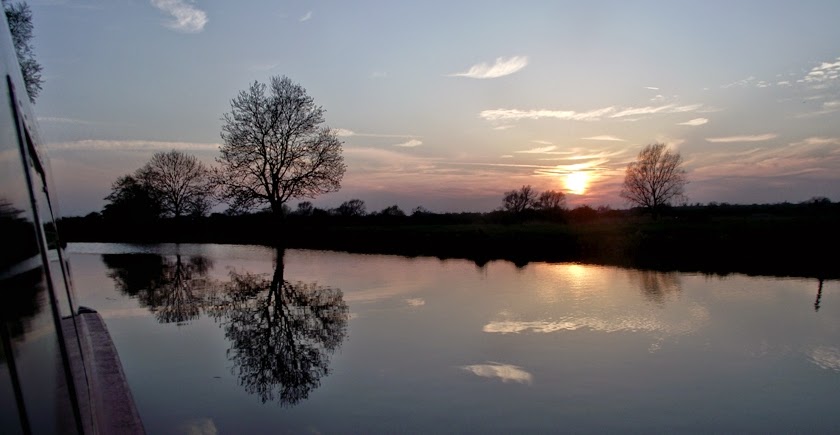 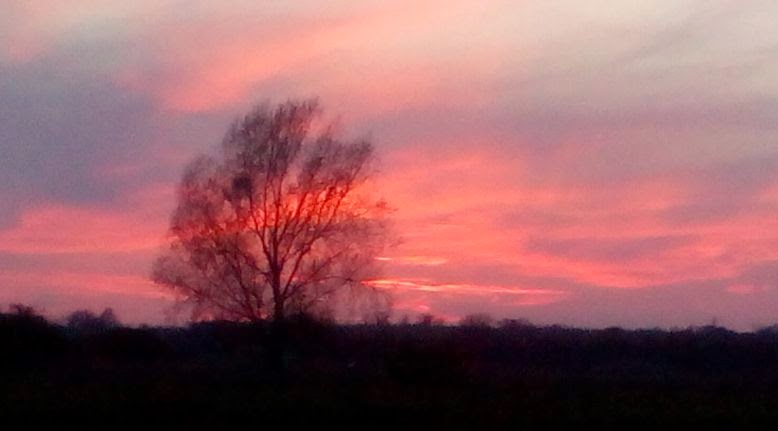 Walking through the village was like stepping back in time. One of our walks from Elton took us through Fotheringhay, 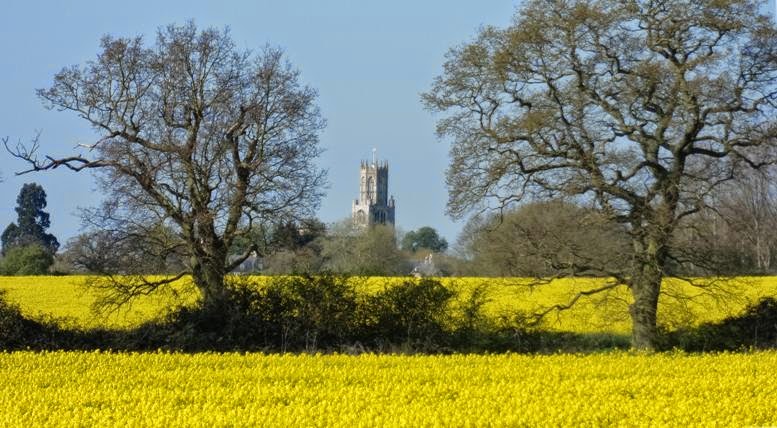 where Richard III was born and where Mary Queen of Scots was beheaded. All that remains of the castle where all this history took place is a large mound and a surrounding moat. 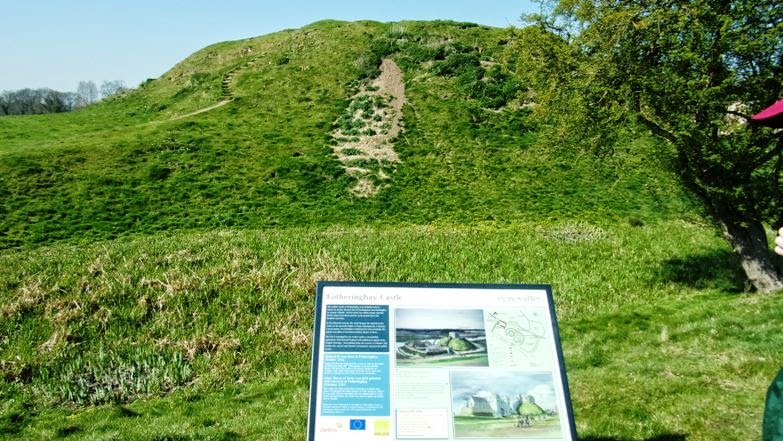 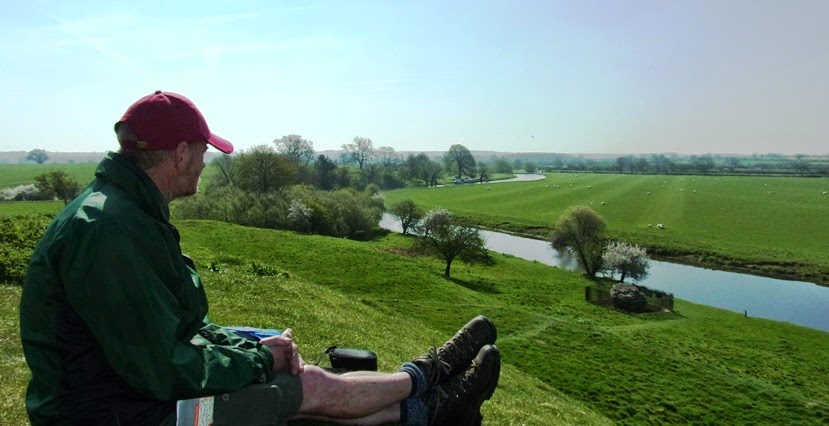 The view from the top is fantastic.  We don’t usually get all that excited by old churches, but St Mary’s in Fotheringhay is well worth a visit, 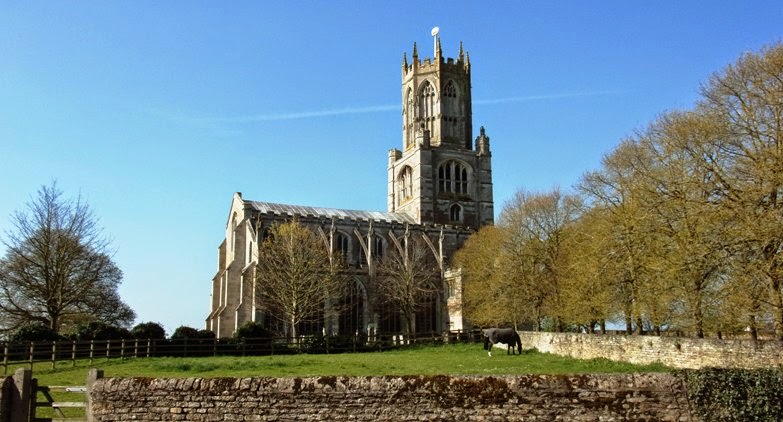 if only for the very well presented history lesson from the 14th century through to the war of the roses.

Meanwhile, in the present day, Anne’s daughter Cat and her fiancé Ben have been living in Myanmar (Formerly Burma) for nearly a year. They were on a flying visit to the UK and it just so happened that Frankie and Harry were in the country as well so we left Legend at Elton and went up to Chesterfield for a party. We’d been looking forward to this for ages and it was great to see everyone.

We’d heard that there was a tree on the river bank in the middle of Wansford that it’s possible to tie to, but as we didn’t really need to visit the village we carried on through the impressive bridge,

to Wansford Station, where there is a very useful floating pontoon by the picnic site just below the Nene Valley Railway signal box. 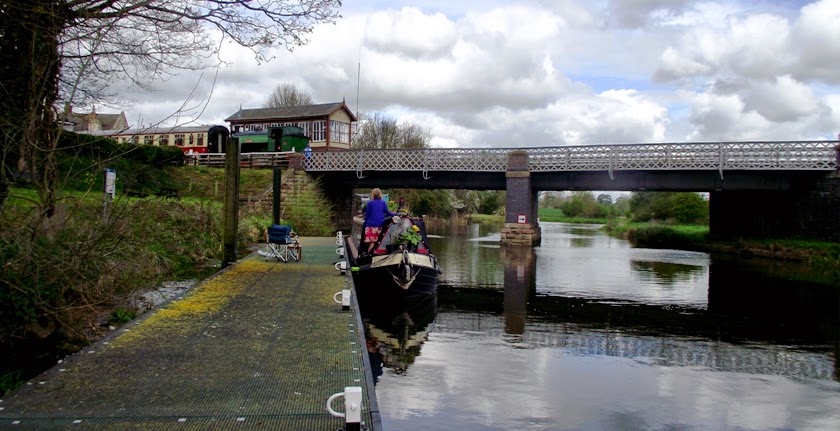 As it was a weekend, we were treated to steam trains going over the bridge behind us and a very gorgeous passenger boat sharing the mooring with us between river trips.

You were lucky then, the trip boat at wansford turfed us off and we had a stand up row with him and the station manager.
Will never go there again