We really love this river!

Halfway down the Rothersthorpe flight we’d spied a fallen ash tree so, being the water rats that we are, we’d made a little wood pile that we’d planned to collect while the boat was in lock 10 on the way down. 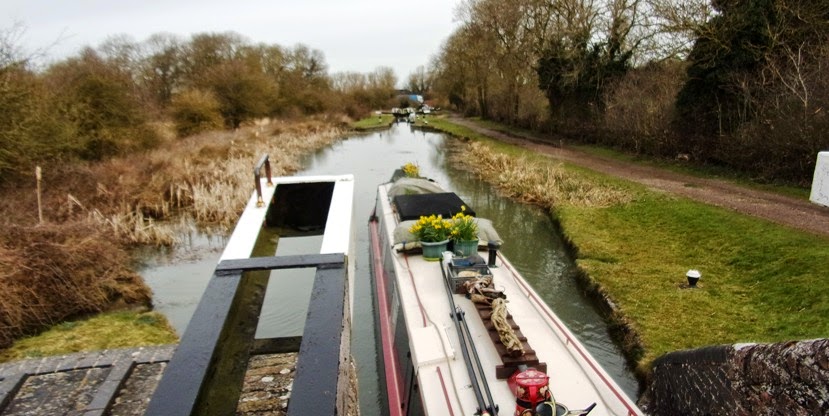 We’d just dropped down lock 9 when we noticed a hire boat with a full complement of windlass wielding crew on their way up. They were so excitable we couldn’t really delay their progress and despite Ann-Marie getting very assertive about lock protocol, we were in and out of 10 before you could say Jack Robinson.

No matter, lock11 was only a few steps further and our log pile wasn’t that big. Anyway we didn’t want to clutter the roof up too much if we were going to be using the gang-plank and the boat poles regularly.
Half way down the flight, the arm goes under the M1, which is fun. 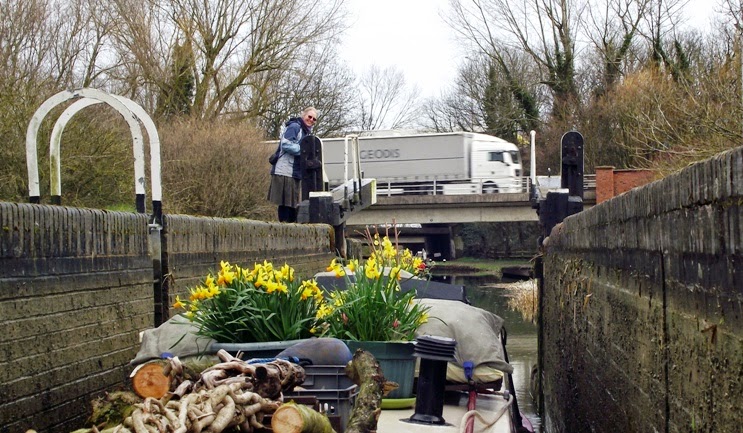 At the bottom of the Northampton we had our first glimpse of the River Nene. 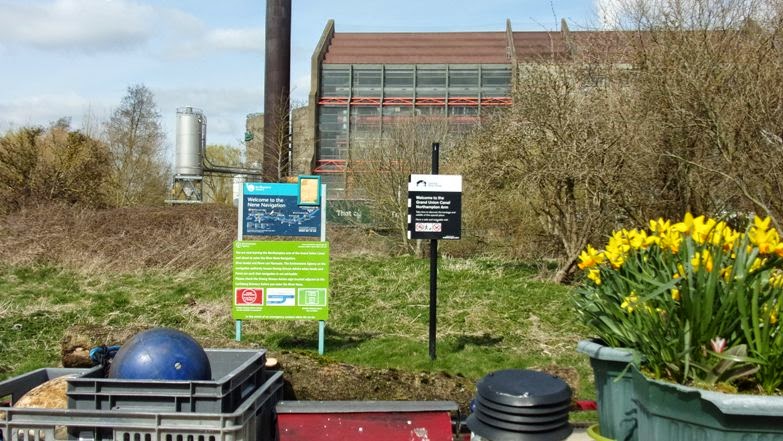 And went from this.

We'll not be back on a canal until we return this way in Autumn.

Our first River mooring was between South Bridge and Northampton lock. There’s a very useful Morrisons just there, in fact it’s a bit too easy; “Oh we’re out of milk, I’ll just pop next door and get some. And I’ll get some reduced hot cross buns while I’m there.” 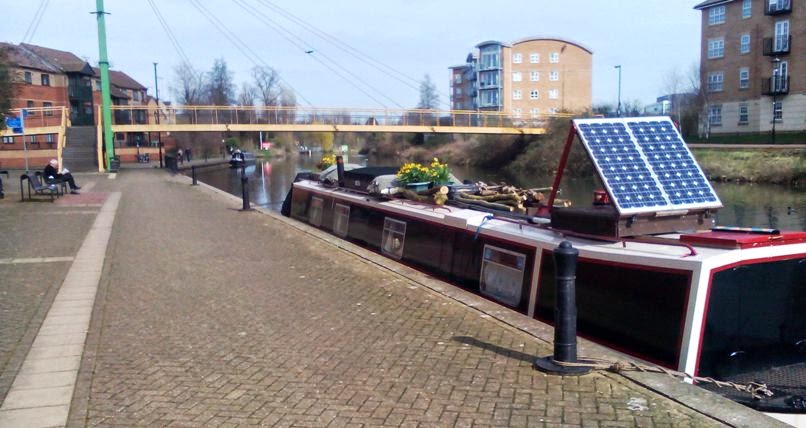 There’s also Northampton town centre to go at, which produced a tray of pansies, some new mats for the rear counter, some fairy lights and a USB splitter. All very essential boating items.
Anne came for an overnight visit and chill-out, so we took her through the lock and down river to the EA floating pontoon mooring at Midsummer Meadow, about ¼ of a mile altogether. 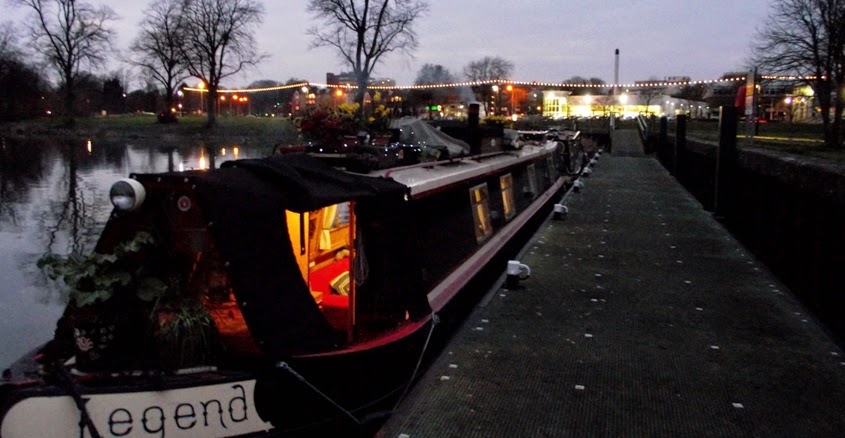 Well you don’t want to rush these things.

The next day was Easter Sunday. We woke up to find that the Easter bunny had laid a trail of little cut-out eggs around the boat with clues on for Dave to follow, and had put a Lindt Bunny on Ann-Marie’s pillow. Easter chocolate in bed; it’s a religious thing.

After that we spent a lovely spring afternoon walking back along the Nene Way from Earl’s Barton where we’d deposited the car. At dusk, as we were just about to have our tea, we noticed a tiny plastic cruiser coming very slowly down the river towards us. At first we thought it was just drifting, but it turned out to be propelled by a little electric outboard hooked up to a couple of nearly flat batteries and a solar panel which took up most of the back of the boat.
Darren explained that he’d pulled his little boat most of the way from Birmingham and was heading for Wellingborough where his mum lived. He’d got no heating, no lights and not much else, so when he’d moored up we invited him to join us for tea as we’d got plenty to share. We’d also got the fire going so he got warmed up as well.
The following morning we put one of his batteries on charge and towed him through the next two locks to another EA floating pontoon at Northampton Washlands. Not a particularly big move but we really liked the view.

We’d thought that Darren would carry on but he proceeded to spread all his belongings out on the end of the pontoon to dry them all out. We wondered if we’d got a permanent tender, but the next day, with his solar panel in full sun, he set off through the lock and down the river.

We stayed another night and then, after sorting our boat insurance out for another year, backed off the pontoon and headed into our first guillotine lock. Once you get used to them, guillotines are easy peasy, but they look a bit daunting to start with. 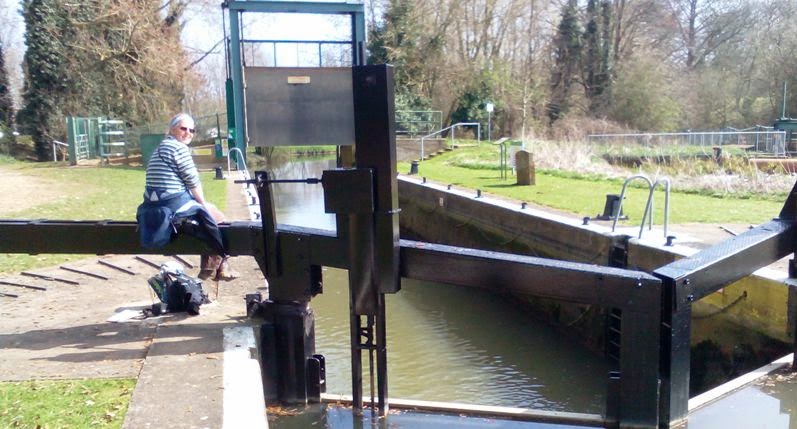 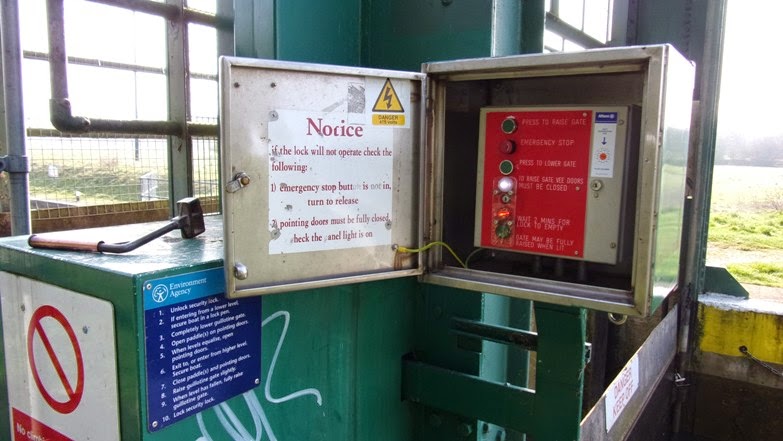 By the time we moored up at White Mills we’d done five of them between us and we were old hands. 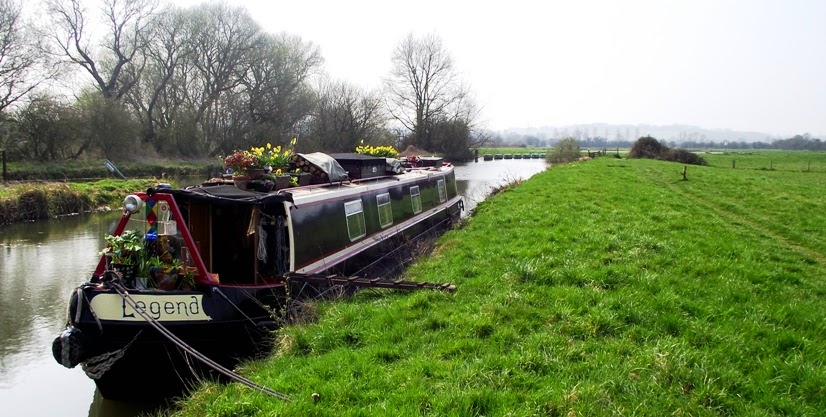 We Christened our gang plank at White Mills and decided that it’s a wonderful thing but a bit on the heavy side for wrestling back onto the roof before setting off, so we’ve decided to use the aluminium ladder on a day-to-day basis, as it fits across the well deck and is easily deployed, and keep the wooden plank for steep angles, or when a more permanent fixture is required.
The owners of the farm at White Mills have been given planning permission to open a marina and the lady came along to ask us what sort of things we felt were important and what would tempt us into stopping. We're really the wrong people to ask; in four years, apart from two blacking weeks, we've always been moored bankside, but they were very nice and we promised to come and see them when we come back.

Next morning wasn’t really a boat moving day but we did go through one lock to give us a beautiful view over the valley floor,

before moving the car to Irchester and walking back. This took rather longer than expected for two reasons. Firstly, to our dismay, we discovered that The Nene Way, despite being shown on our brand new 2014 OS Explorer map as crossing the river at Chester House, had been closed since 2011 when the footbridge was condemned. After a bit of discussion, we retraced our steps, walked through the very pretty and very popular Irchester Country Park and finally crossed the river in Wellingborough.

The second hold up occurred near Great Doddington as we walked beside the river across a sheep field. 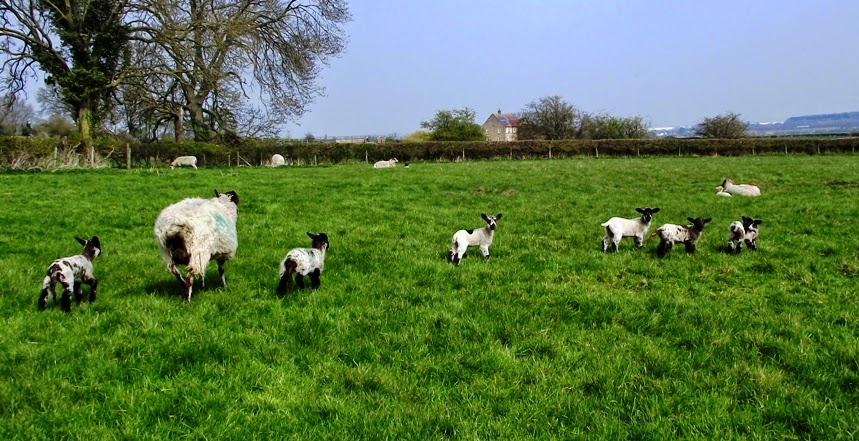 Although the boingy lambs were a distraction, it wasn't them that held us up.There were several sheep at the water’s edge having a drink, and as we got closed we noticed that one of them was up to its neck in the water. We don’t know how long it had been there, but it was completely water-logged and it had given up struggling. Dave grabbed a couple of handfuls of soggy fleece and pulled. It took all his strength to get it up the bank, but he did it. The sheep staggered around for a bit while the bulk of the water drained away then wobbled unsteadily up the field to join its completely indifferent companions. 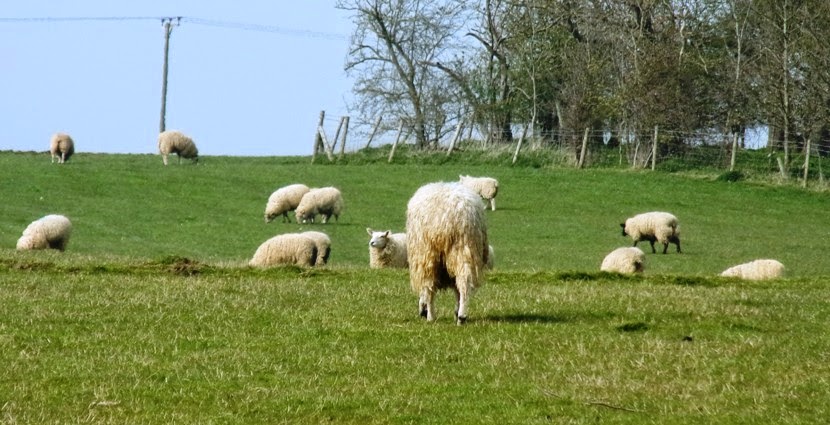 It was a sunny afternoon, so we were hopeful that it would have dried out enough by nightfall to survive the experience.

Back at the boat it looked like it was going to be a warm evening with no need for to light a fire, so we thought it would be a good time to drain down the radiator and swap the Squirrels over. It went quicker than we expected and the new one was in place and all the plumbing back together again by bed time. 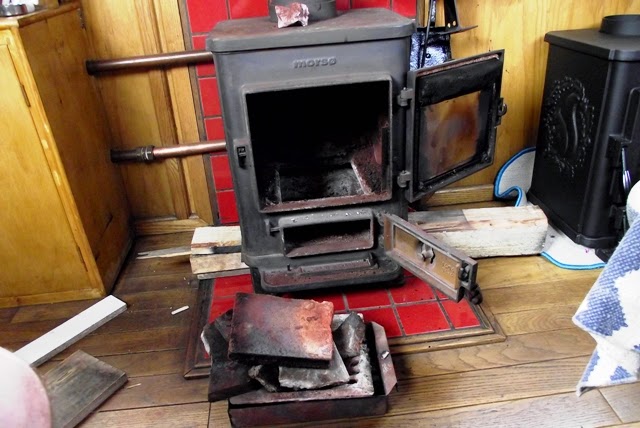 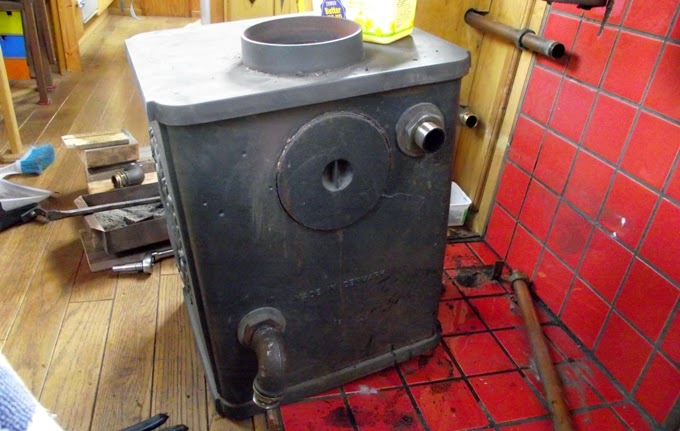 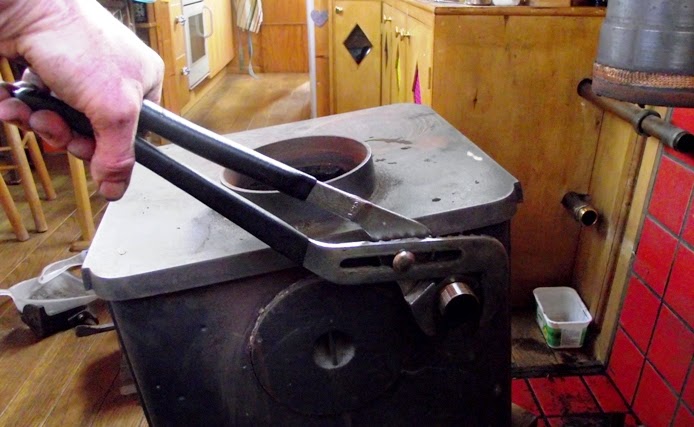 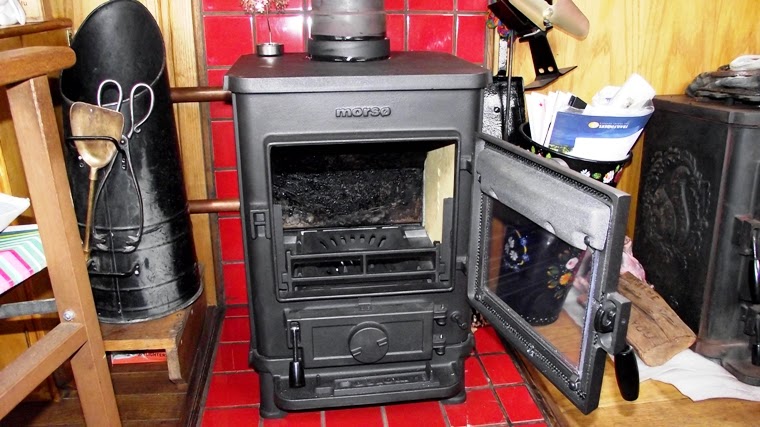 Our next boat move was to Lower Wellingborough Lock, via Wellingborough town moorings, where there’s a tap and an elsan, and where there’s a Tesco and a Screwfix, both within walking distance. We needed Screwfix for some high temperature mastic to give our new fire a proper finish. We’ve got some stove paint for the chimney too but we’ll wait until the summer to do that; it’s better if it cures for a while before you heat it up.

On the way there, as we boated past the scene of the previous day’s rescue, we were horrified to see two more of the stupid bloody animals in the water. This time we had to stuff the boat into the reeds and leap off before Dave could repeat his heroics while Ann-Marie hung onto the centre rope. One of the ewes was in quite a bad way and could hardly stand up but she managed to wobble off eventually. Once we’d climbed back on board we had to punt ourselves out into the channel again, and of course the wind picked up just at the wrong moment. By then it wouldn’t have surprised us if the entire Middle Nene Cruising Club had come steaming round the corner, but happily they restrained themselves and we resumed our idyllic meander through glorious countryside. Three sheep saved in two days. We think Farmer Palmer owes us big time.

We stopped just downstream of lower Wellingborough Lock on a handy brick wharf that we’d been told about by Martin and Yvonne.

What a fabulous place to be. 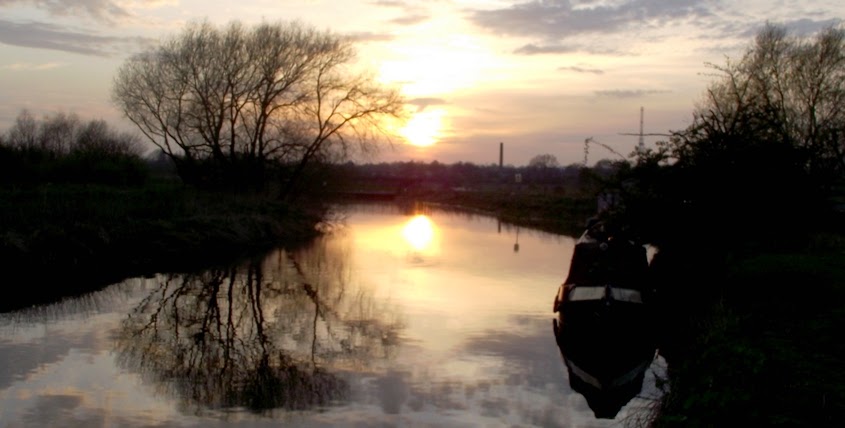 Stoopid sheep. Second only to pheasants.