Talk about getting your money’s worth! Legend has been the focus of attention for a small army of CRT employees over the last week and a half. First there were the two who helped us down the Millennium Link; they operated the staircase and the sea lock and made sure we were safely on our way down the Ribble.

The crossing back was just as exciting-in-a-good-way as it was on the way over, and pointing the bows of a narrowboat at a horizon that is all sea for a couple of hours is something we will remember for a long time. Next there was Harry and a whole gang of helpers who worked the sea lock at Tarleton, bringing us off the river Douglas onto the Rufford branch of the Leeds & Liverpool, and to whom we owe special thanks as it was seriously chucking it down when we got there but they all just smiled and got on with it. We were right about a big tide going out fast; it was odd to be ploughing through the water, pushing a huge bow-wave whilst the scenery casually dawdled past. Our brave little 19hp Lister has never had to work so hard; on the final stretch, with the open lock ahead of us and not appearing to be getting any closer, we had 2600 RPM on the clock, although that doesn’t mean a lot as the rev counter is off another engine and hasn’t been calibrated to ours. Suffice to say that normally if we go above 2200 on a canal we start creating a wash and people throw things.

We had two nights at Tarleton, then it took us a couple of days to get down the Rufford Branch. We stopped just before the last two locks so that Bill, Evie and William could join us as we went round the corner into Burscough. They are Sue & Steve’s son-in-law and grandchildren. They helped with the locks, got round the outside of Ann-Marie’s cottage pie and they seemed to thoroughly enjoy the experience. We moored up just in front of Dave & Kate on Bosley who were on their way from Liverpool to their winter hang-out on the Peak Forest canal, 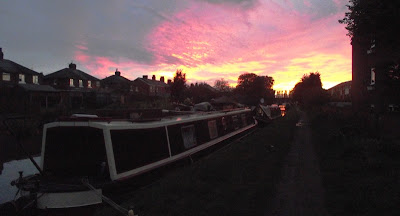 so it was a social few days we had before heading off to yet another Limit of Navigation, this time at the end of the Leeds & Liverpool.

In 2010 the Liverpool Canal Link opened enabling inland waterways craft to cruise through the stunningly redeveloped Central Dock area, past the Liver Building and the new Museum of Liverpool, through Albert Dock and moor up on a pontoon in Salthouse Dock, right in the middle of the city. This extra couple of miles of canal has made what was once the grotty end of the L&L into an increasingly popular destination for narrowboats, benefiting the whole western end of the navigation in the process. Passage is assisted from Aintree and normally there are half a dozen boats going through in convoy, but not today. We were on our own and so had the undivided attention of yet two more sterling CRT chaps who opened bridges for us and let us down the locks. 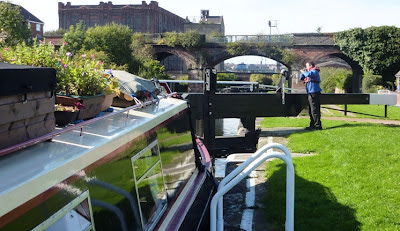 From just before the original terminus at Eldonion Basin, we descended the Sanley Dock flight of locks, then spent the next hour or so going “Wow!” as we passed through the huge dock complex with warehouses towering above us and wharves on every side bristling with giant mooring bollards. 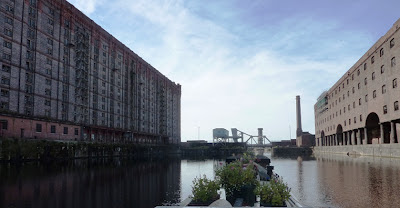 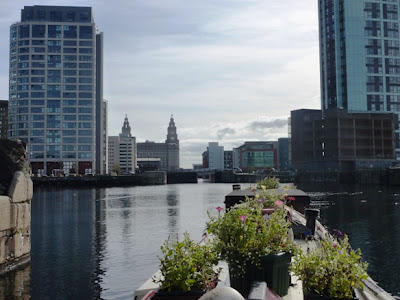 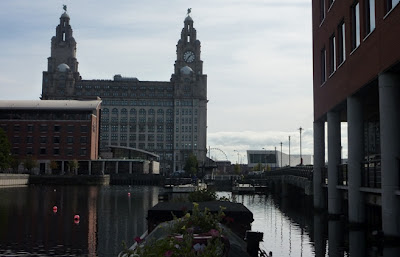 There are two locks along the link, 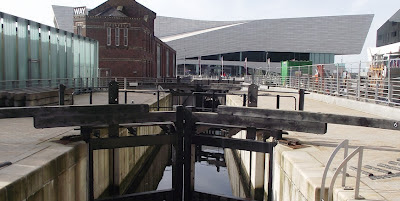 after which, with a blast on the hooter, we emerged into Canning Dock and an audience of Sunday Strollers promenading along the dock walls above us. 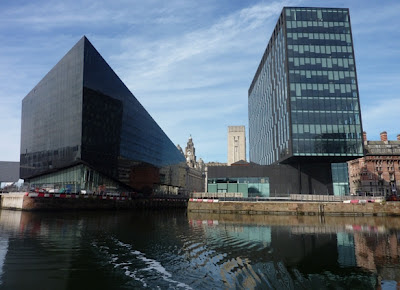 The weather - for once - was fabulous, and we chugged through Albert Dock and onto our appointed pontoon in Salthouse in blazing sunshine, waving at everyone and having a ball.

You can just see Legend behind the gazebo thingy.
Everyone we’ve spoken to about visiting Liverpool has said how good it is, words like “Vibrant”, “Revitalised” and “Exciting” crop up all the time, and we have now got the hint that the museums are both brilliant and free. We’d need a lot longer than a week to fit in everything we’ve been told to visit and we’re thinking that maybe we should have booked a fortnight here in the first place. Not to worry, if we miss some stuff it’ll give us a reason to come back again. 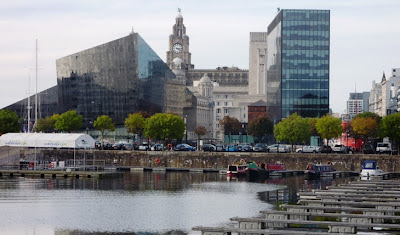 And to all the CRT people who assisted our passage – Thank you, as ever you were without exception friendly and helpful.
at October 08, 2012